Recap as to what I'm working on: a group of friends and I decided to attend our local Renaissance Faire this fall as the Six Wives of Henry VIII. Tudor England was one of my first loves in history, even before I started costuming, so of course I jumped right in! Between my affinity for the period, and the fact that I haven't done a Big Project in a while...I decided to make this a Big Project! Entirely hand-sewn, and accurate as I, personally, have the time/money/materials/knowledge to make it.

Katherine Parr is one of the more well-represented wives in terms of surviving portraiture - I had three I was considering, but after a preliminary materials search, I chose the well-known one in the National Portrait Gallery. 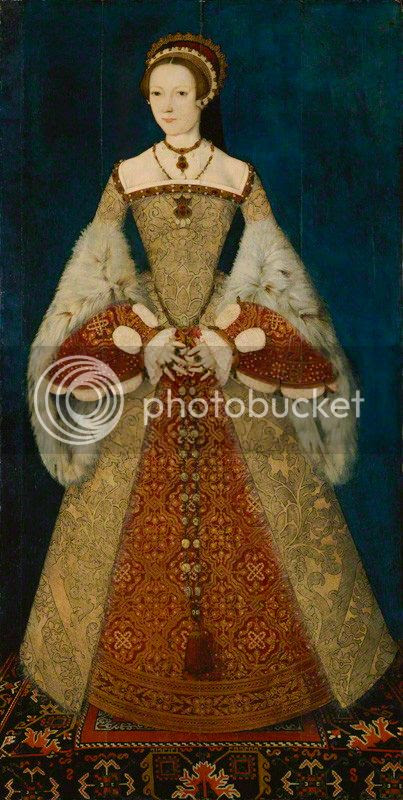 There is a lot of detail in that portrait - I've got a larger, albeit slightly fuzzy version of it, and I can do crazy things like count the jewels in the billiments on her hood, and see that there's scarletwork on the puffs in her lower sleeves. Which is great on one hand, but then on the other I feel obligated to recreate everything I can see as closely as I can, and then feel guilty if I don't. I'm always my own harshest critic...

I've been sewing steadily almost every day, but I don't have much to show for my efforts yet. Underwear is just not that exciting. I did almost finish my smock - I'm leaving the neckline until after I finish the kirtle, so I don't make it too big or too small! 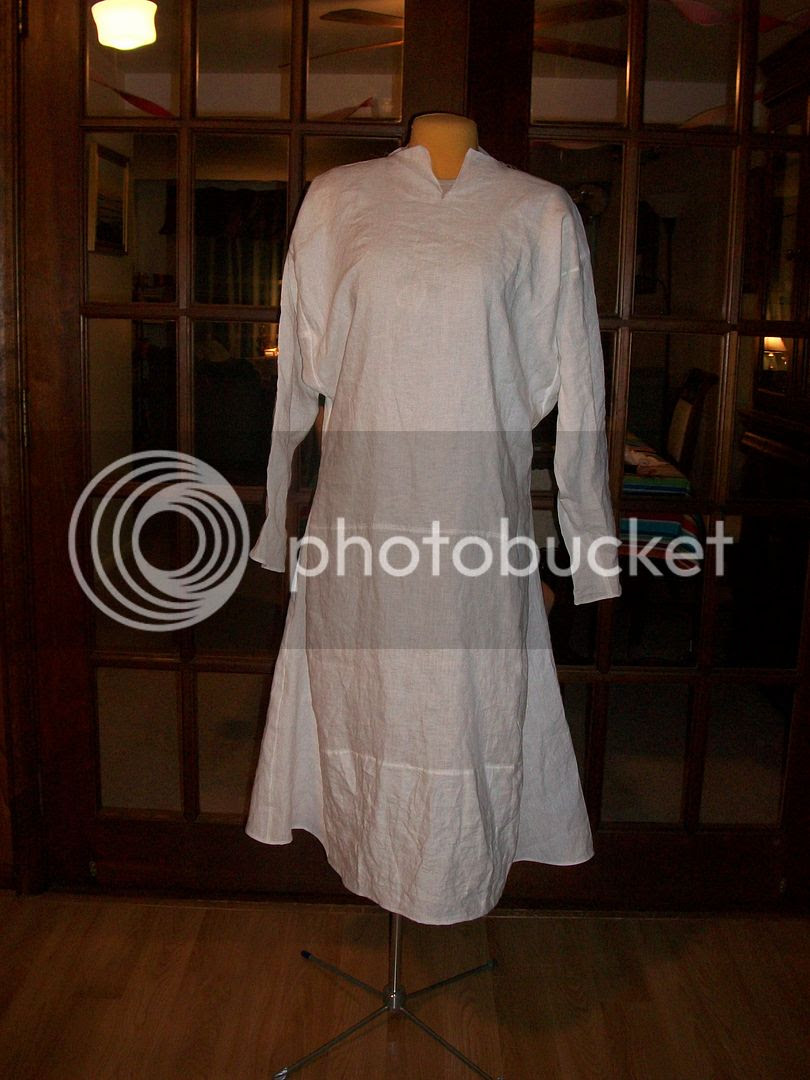 Very attractive undergarment, no? I was determined to use up some of the small bits of white linen I had in the stash and the scrap bin, so that's why there are all those seam lines. The upper 2/3 and sleeves are of two different handkerchief-weight linens, and the lower third and gores are a coarser mid-weight linen. 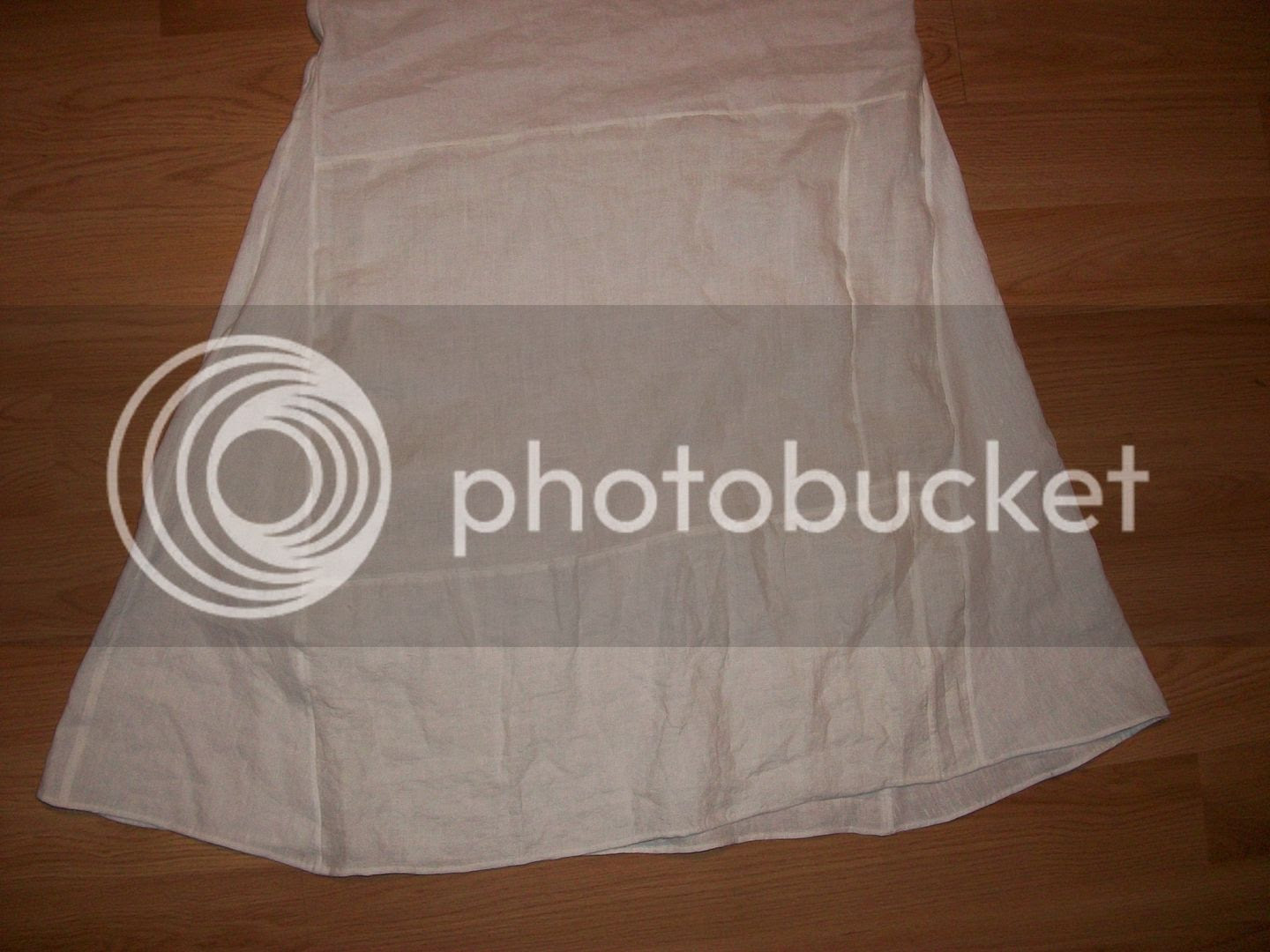 Yeah, really. Each piece is hemmed, then whipped together - it takes three times as long, but makes for a nice flat sturdy seam, so I keep doing it!

The farthingale is still a work in progress - I just sewed the bottom of the last casing on tonight, so I can start boning it in the next few days. I soaked the reed for it tonight and got it out of its tight coils, so it should be ready to go. 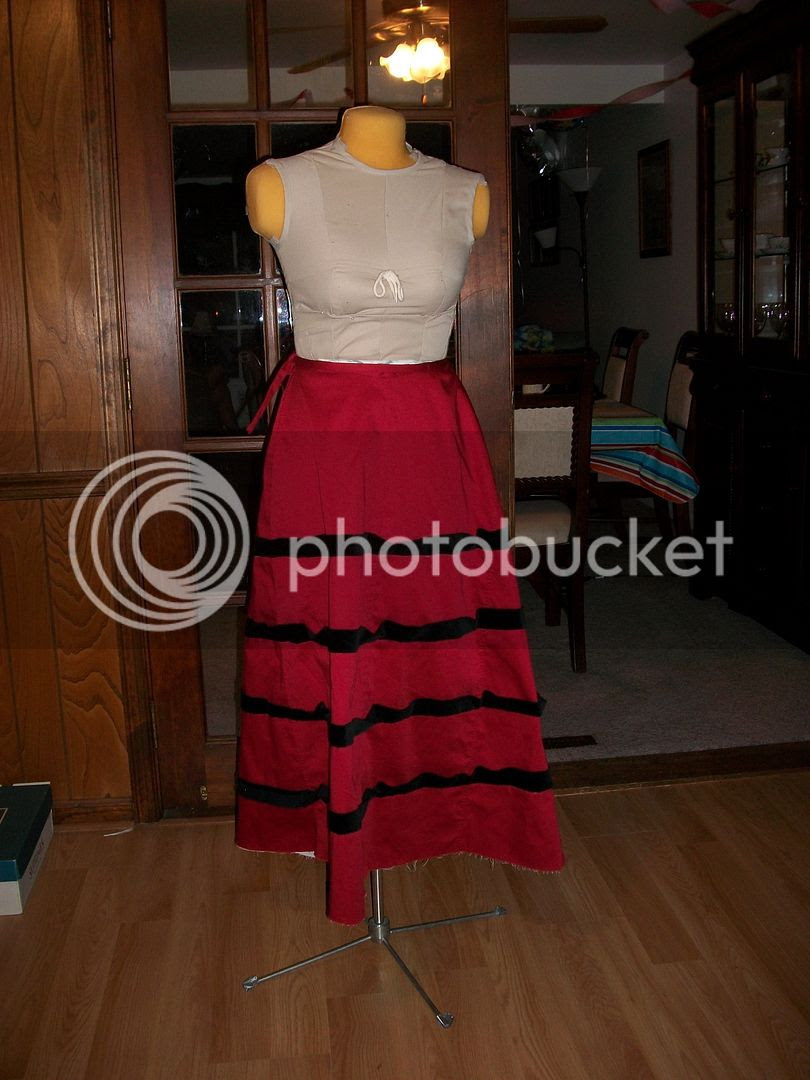 The fabric for this is one of my compromises; I needed a sturdy fabric but wanted it to be pretty too! And red. Ideally I'd have liked silk backed with heavy linen, but I was already spending so much on this outfit I had to cut costs somewhere! I found some cotton sateen for less than $5/yd that fit the bill. And the casings are black cotton velveteen from the scrap bin. Actually, they're from my black Tudor dress, which I took apart for the fabric a year or so ago. It was quite a nice velveteen.

I've also fitted and cut out the kirtle bodice. There's no definitive evidence as to what supportive garments Tudor ladies wore, but most of the articles I've read seem to agree that the separate garment (pair of bodies, stays, corset, whatever name you might recognize it by) probably wasn't worn by English women until late in the century. Later than 1545 (the approximate date of my portrait), anyway. I've seen quite a few successful repros made that only used a boned kirtle, so that's what I've chosen to do. 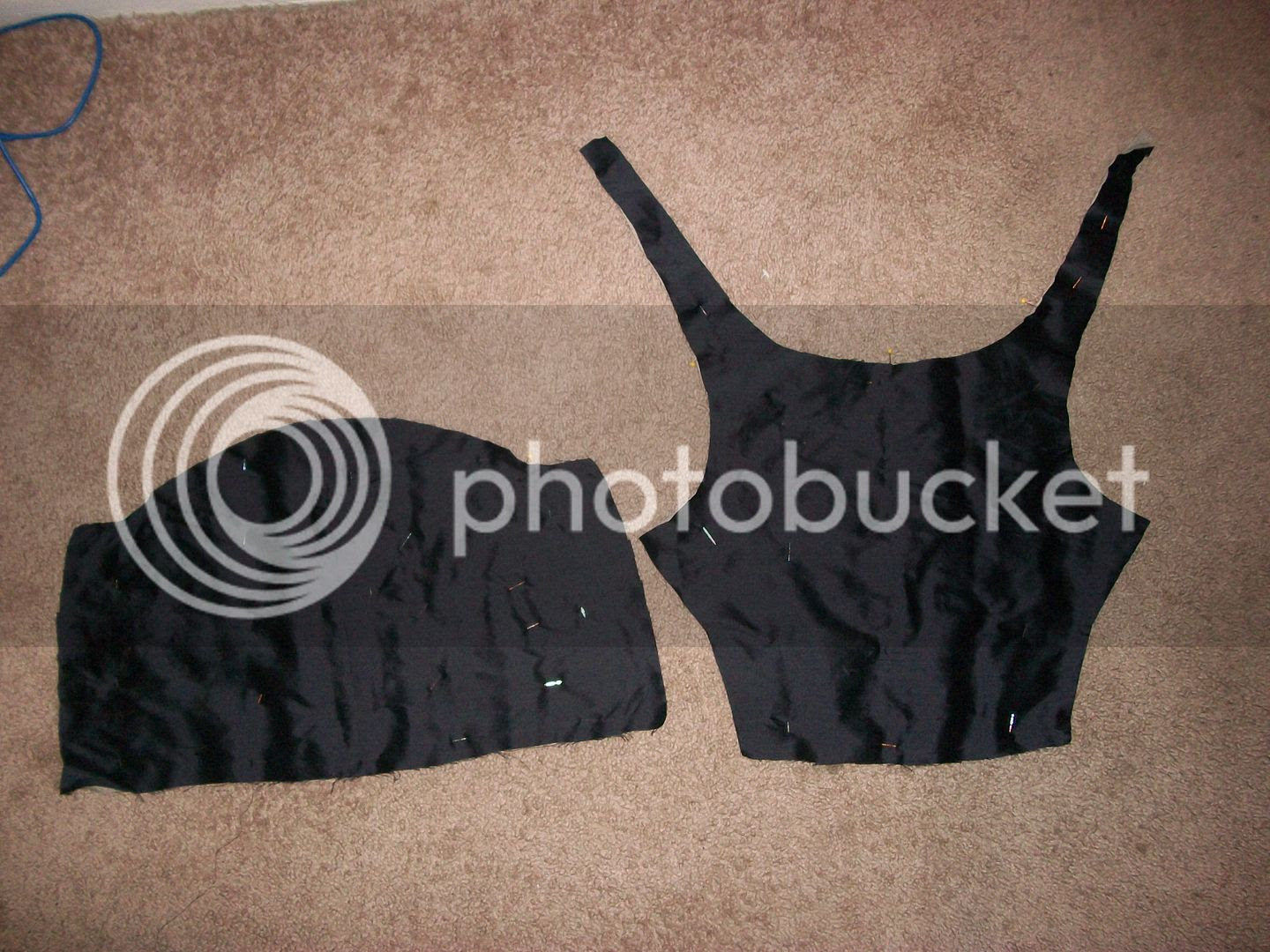 The kirtle fabric's another compromise - navy silk dupioni. It's fairly slubby, and I cannot imagine would be acceptable for the Queen's kirtle - but it was in the stash, has a decent weight to it, and most importantly, wasn't intended for anything else! And like the farthingale, it won't show...the top of the bodice will be finished with red & gold damask, and the front panel of the kirtle skirt will be made of the same. Said red & gold silk damask is in the mail at the moment.

(Side note: after lots of staring at that large version of the portrait, I think most if not all of the design on her forepart and lower sleeves is actually embroidered/goldwork/some kind of surface decoration. But even I don't think I can do that by October! The damask I found is a wonderfully similar shape, so I have no guilt over using it!)

I searched for gown fabric for months, let me tell you. I was incredibly picky...but if I'm putting all this work into it, I want close-to-perfect fabric! The right color was hard to find; not least because every picture of the portrait online has a slightly different tint to it, and they'll all look different on different monitors, anyway.

But ebay finally came through for me, and congratulations to me, this is the most expensive fabric I've yet bought! It means no more overnight costume excursions for a while (so, no Regency ball in August for me), but it was worth it. 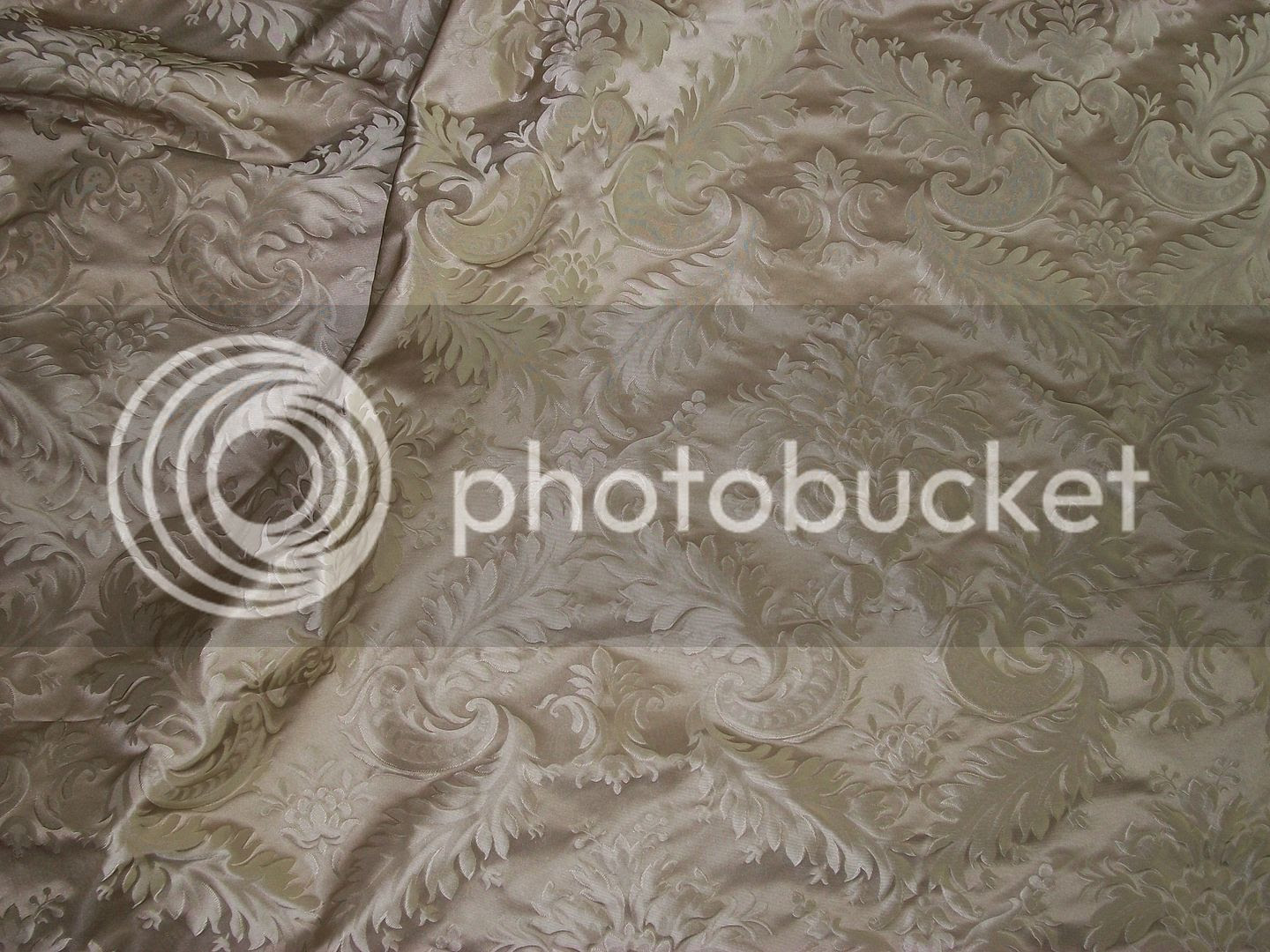 And then today was a sewing day at a friend's house, and I wanted something easy to carry! So I drew out some of my scarletwork for the lower sleeve puffs. I couldn't quite get a clear enough version of the portrait to get a pattern for the embroidery, so I'm using this one from the Blackwork Embroidery Archives. It's got a similar feel to it, anyway! 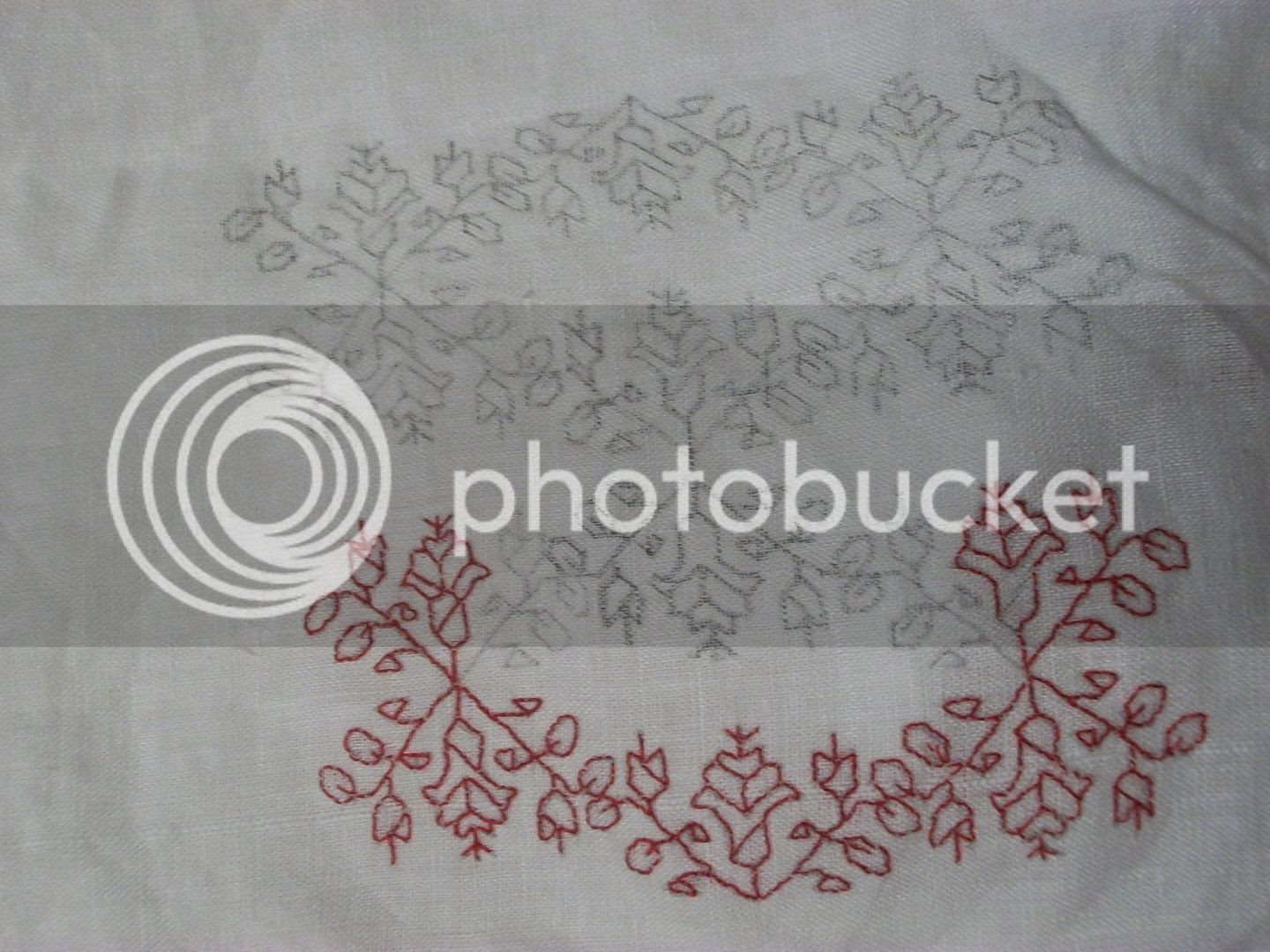 It's silk Gutermann on a not-terribly-fine handkerchief linen. Embroidery is not, uh, one of my stronger costuming skills, and it's all a bit wonky. Not too wonky, and it'll all be pulled through sleeve slits and scrunched up anyway, so I don't care. Except for the cuffs, which I'll try to take more care with. This motif is for one of the four lower sleeve puffs.

As I mentioned, the red damask is ordered, as are the gold organza for the front of the cap, and the two gold trims (one for the kirtle, one for the veil billiment). Still have to order the pearls (for the forepart, lower sleeves, kirtle edge, and French hood billiment), the "jewels" for the kirtle edge, and the jewelry, but other than that, I think I've collected all my materials. Now I just have to put them together!

"Just", she says. And maybe I should update more often so I don't have to inflict such long posts on you all...
16thc:katherine parr