Or, I found my camera cable!!

Fort Frederick Market Fair is an annual event, held in Big Pool, Maryland, and is one of the main shopping events of the year! Not that I bought much (or ever do...I just can't plan that far ahead for projects. "Yes, I think I might need that binding in December" is not how I work, unfortunately), just a new pair of white silk clocked stockings and two hatpins. It's mainly an opportunity to dress 18thc, which I love, and see my friends, which is also pretty fun!

The weather was quite nice, if also very extremely decidedly windy. Gusty, even! All our lovely wide flat hats were perfect wind-catchers...personally I found my hat to be quite secure on my head since it was secured with pins through my hair, but the gusts of wind tugging on my hair got old after a while.

An interim post - I seem to have lost my camera cable, which makes it difficult to show you the Fort Fred pictures! Oopsie.

In the meantime, I'd like to direct your attention to the plight of Your Wardrobe Unlock'd (and its sister site, Foundations Revealed) - it's a wonderful online resource for articles about historical clothing. There are how-to's on everything from death's head buttons to making your own back-seamed 20th century stockings!

I haven't read a quarter of the articles yet, since I just subscribed yesterday, but in my opinion it's going to be well worth it! And I'm sharing with you all because they're in the midst of a subscriber push - they need to bump their numbers up to 700 subscribers in the next two weeks to even keep the site running.

If you've thought about subscribing but never got round to it (like me!), or if you've never heard of the site, or if you've just let your subscription lapse...now is a good time to sign up! There are some articles you can read for free to get a sense of the information you'll get, and you get a discount for signing up for both Foundations Revealed and Your Wardrobe Unlock'd.

Here is Cathy Hay's original post about the future of YWU and FR, and here's the FAQ for the site (explaining a bit about it if you're unfamiliar). They're now up to 601 members, but there's still a ways to go.

This is a very small, very specialized community we're a part of, as historical costumers (or whatever you like to identify with! Even just history lovers), and these sites won't attract a bigger audience if we don't share...so I'm sharing! :)

(Back to your regularly scheduled costuming once I find that wretched camera cable...)

Posted by Amanda at 8:40 AM No comments:

Email ThisBlogThis!Share to TwitterShare to FacebookShare to Pinterest
Labels: ywu

So, I have been sewing, just not updating! After Mary Heany was done and delivered, I started back up with the 18thc sewing I'd need for Fort Frederick Market Fair in Big Pool, MD.

I finished my striped linen gown, made a new set of pockets, made a too-derpy-to-wear cap, decided I couldn't bear the wrinkles on my bias-cut bodice fronts and took them off, cut and re-sewed bodice fronts on the straight (it's done! again!), re-trimmed my straw hat, and knitted one purple garter.

I'm still working on sewing a cap and knitting the other garter. Yes,I'm going to Fort Fred tomorrow. But I do already have caps and garters that will work if these don't get finished! 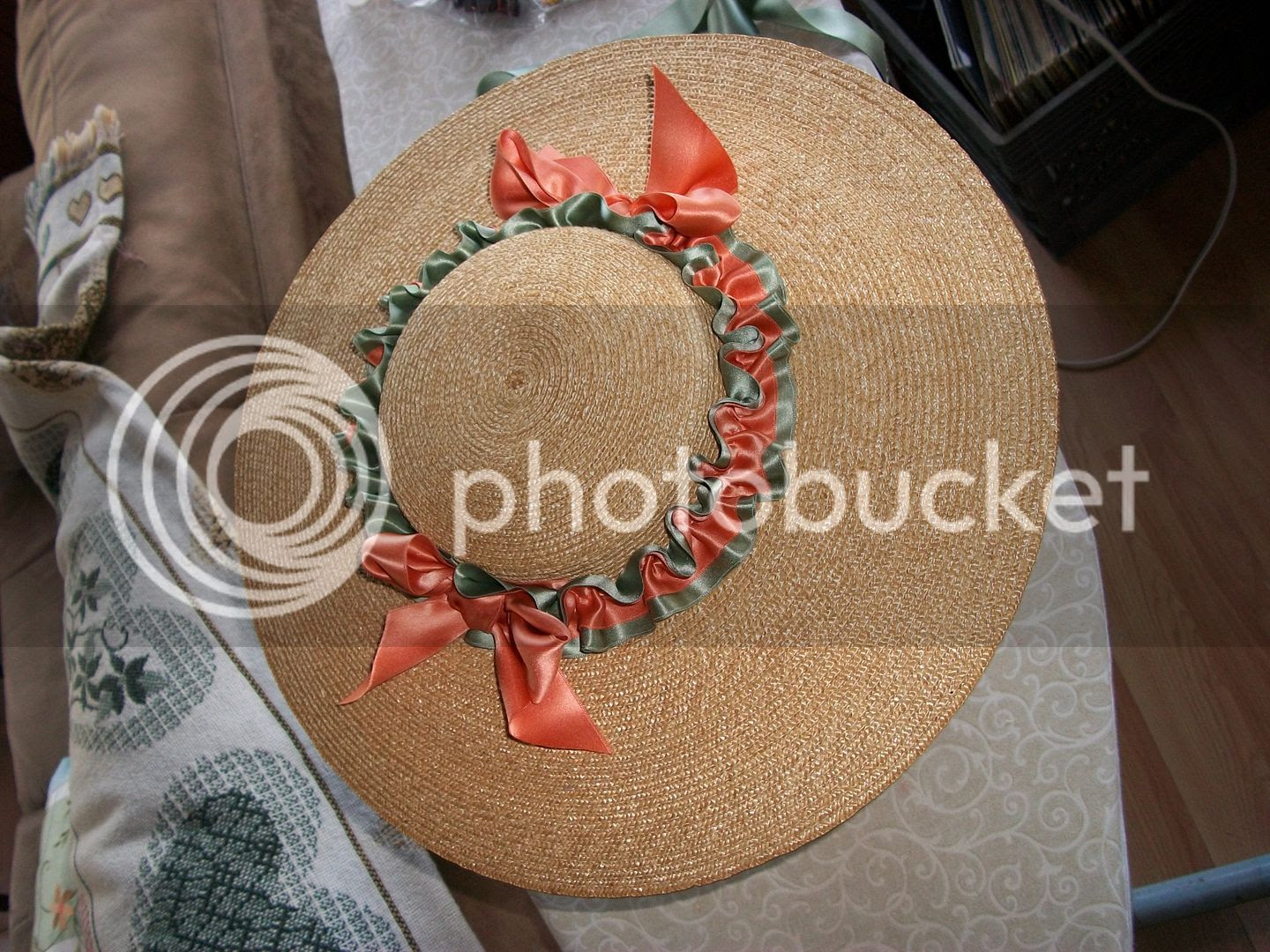 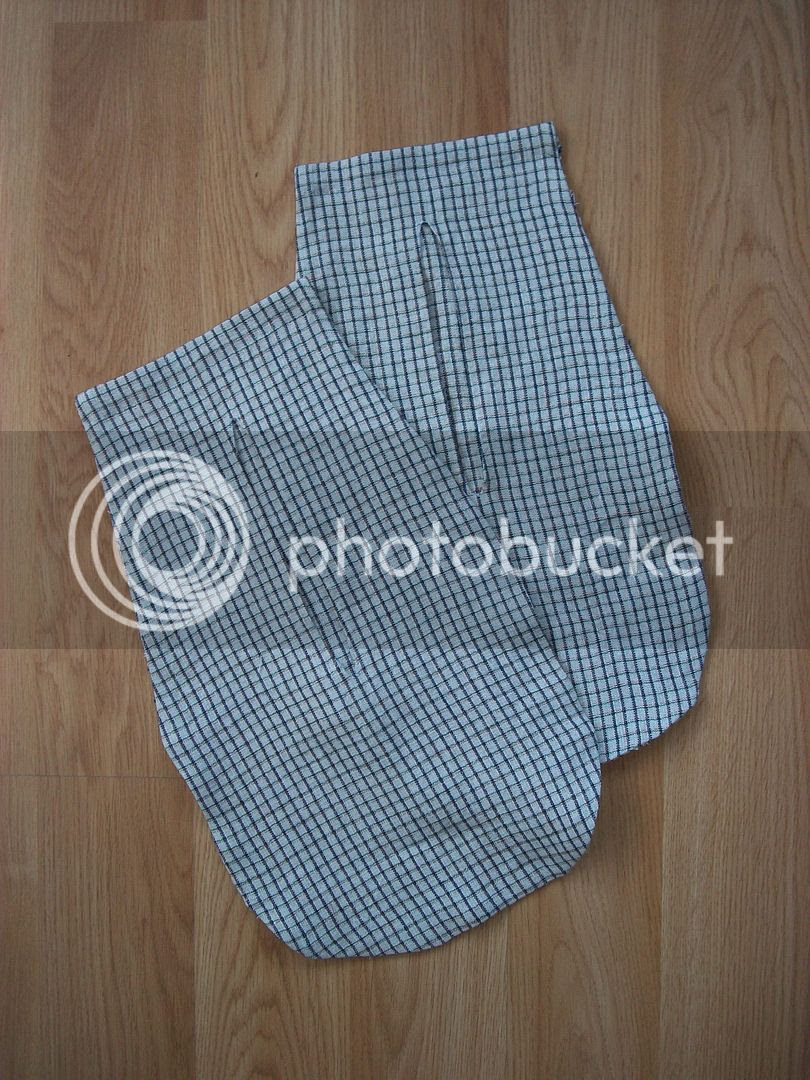 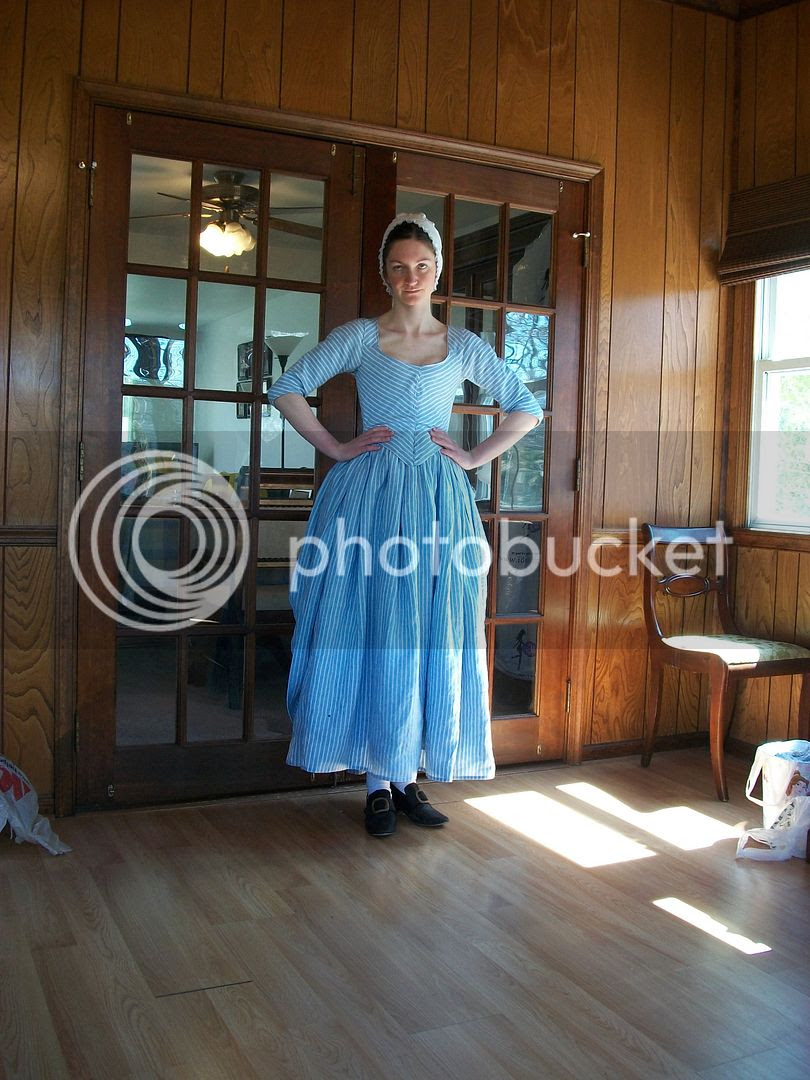 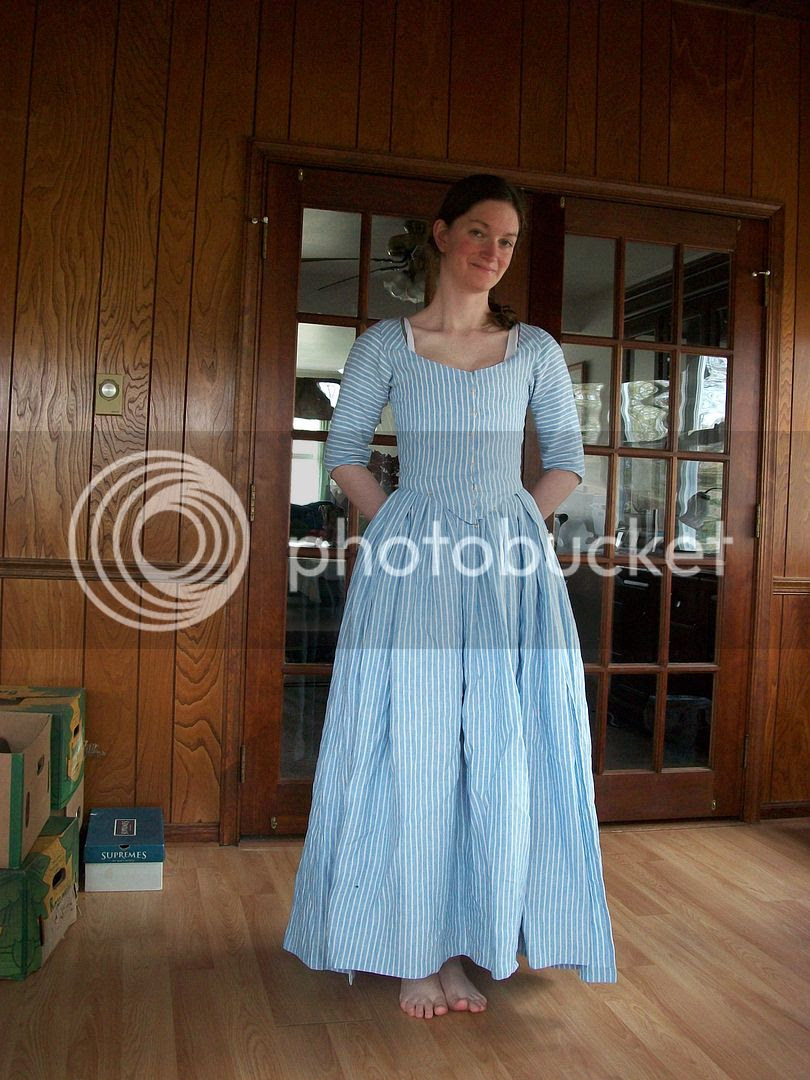 Like I said, I'll be at Fort Fred tomorrow; if anybody that reads this happens to be going as well, do say hi if you see me! :)
Posted by Amanda at 8:44 AM No comments:

This afternoon, I took Mary over to the Whitall house at Red Bank Battlefield and set her up! She's going to live in the kitchen, and have a little setup explaining who she is.

And since I've already talked about the outfit's construction in Part 1, I'll just throw some photos at you and let them do most of the talking! 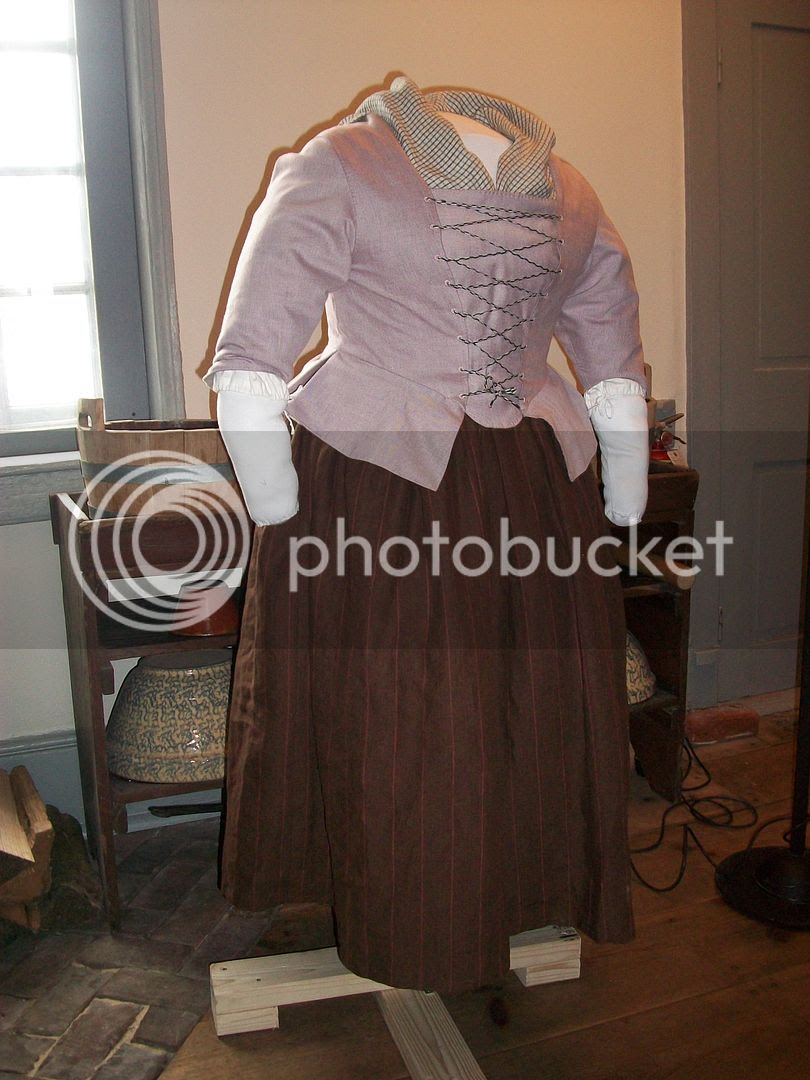 I'll do two posts; this one will be a catch-all with a couple in-progress shots and not-on-the figure shots (aka the less exciting post).

As she was last night, lurking in my sewing room... 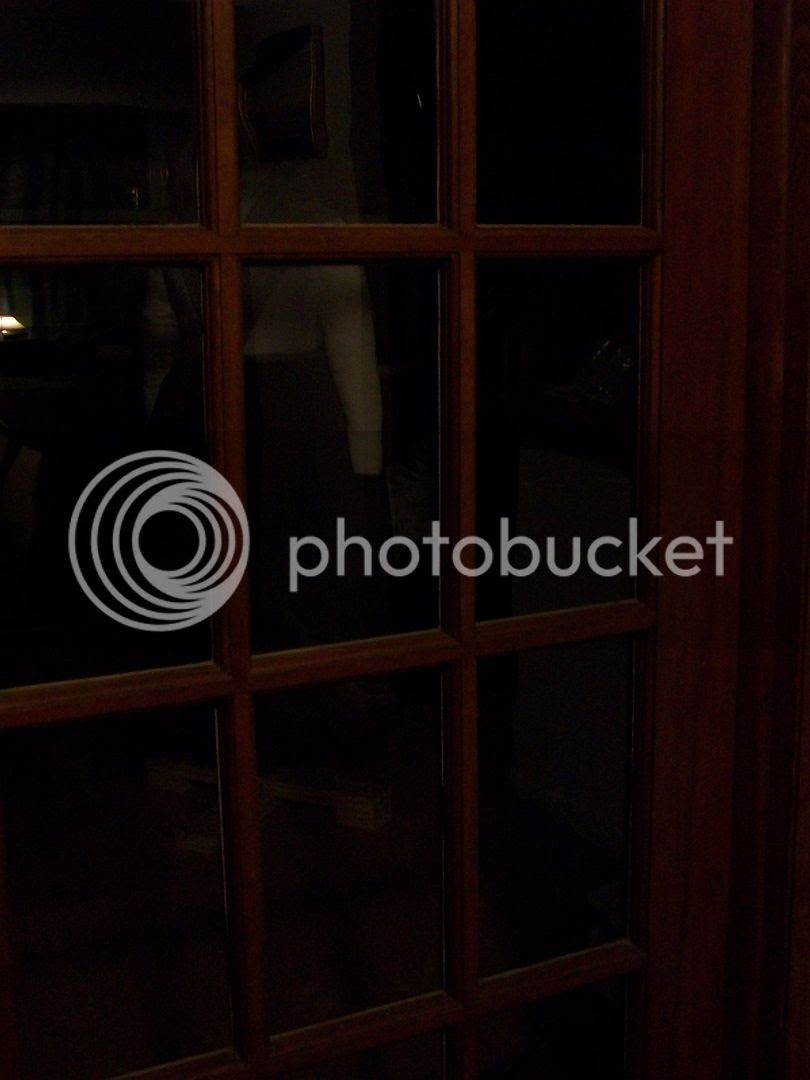