You may (or may not) remember that I was waffling about what to do with the fraying trim on my 1770s striped dress, as I wanted to wear it to the Francaise Dinner. I solved that problem by ignoring it completely, and deciding to wear something totally different!

A majority of attendees wear a sacque/robe a la francaise to the dinner (unsurprisingly), as I always have, but it is open to anything 1750-1800, so I thought I'd go a bit later this year. (Watching The Duchess as I cut out pieces for something else had no influence on my decision, I'm totally sure.)

I have a striped silk gown that I made for Costume Con in 2011, and while it's great fabric, it was never one of my better efforts. It never made it onto my 18thc page for a reason, haha. I meant to have a matching petticoat but ran out of time, and the sleeves were always bad. 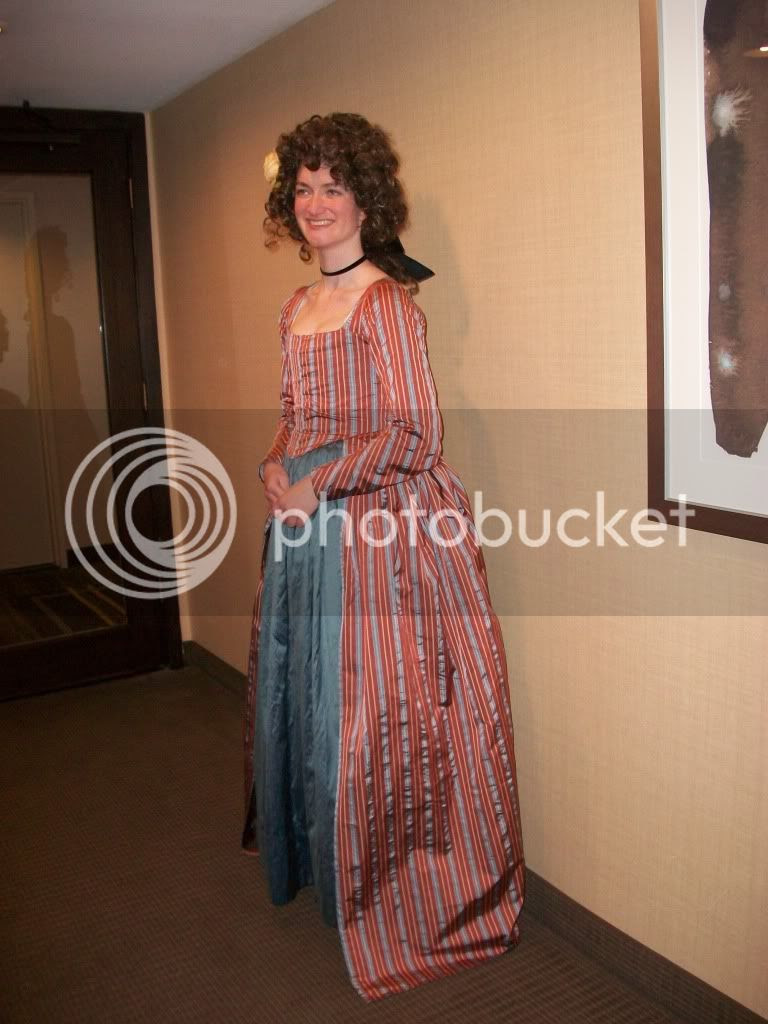 So last week I decided to drag it out and see what I could do with it!

It was very wrinkly.

Sewing Sunday: Not Much Sewing

I thought bunches about sewing, does that count?

I poked at the trim on the striped 1770s dress, as I think I want to wear that to the Francaise Dinner next month...but the red silk is fraying like nobody's business, and I'm not sure I'll be able to leave it on for another wearing. So I gave that up in disgust after stitching one piece of sleeve trim on. Should worry about that now, but I won't. Laters.

I also made a modern skirt. "Modern" apparently equals 1950s around here... I used the skirt of B5707 (OOP now), mainly because the fabric was a remnant and I just looked through my patterns til I found something that would fit on the fabric!
The fabric's just under a yard of blue-and-black wool suiting - I got it when remnants were 75% off, and suitings were on sale...so I ended up paying less than $3 for it. Not Bad. It's lined in an unpleasant navy poly faille (dug out of my modern fabrics bin, and I have no idea where it came from, because I know I didn't buy it) that would NOT iron nicely. Stupid poly.

Yesterday I went to Longwood with some friends, which was the original excuse to make my 1879 dress. I don't do much late Victorian, so this was a bit of branching out for me, and I thought LG was a nice setting for it! (Strictly speaking it doesn't quite match in time period; 19-teens would be more accurate for the gardens. Details...) It's not as exciting as it is in spring or summer - but my birthday isn't in spring or summer, so there. 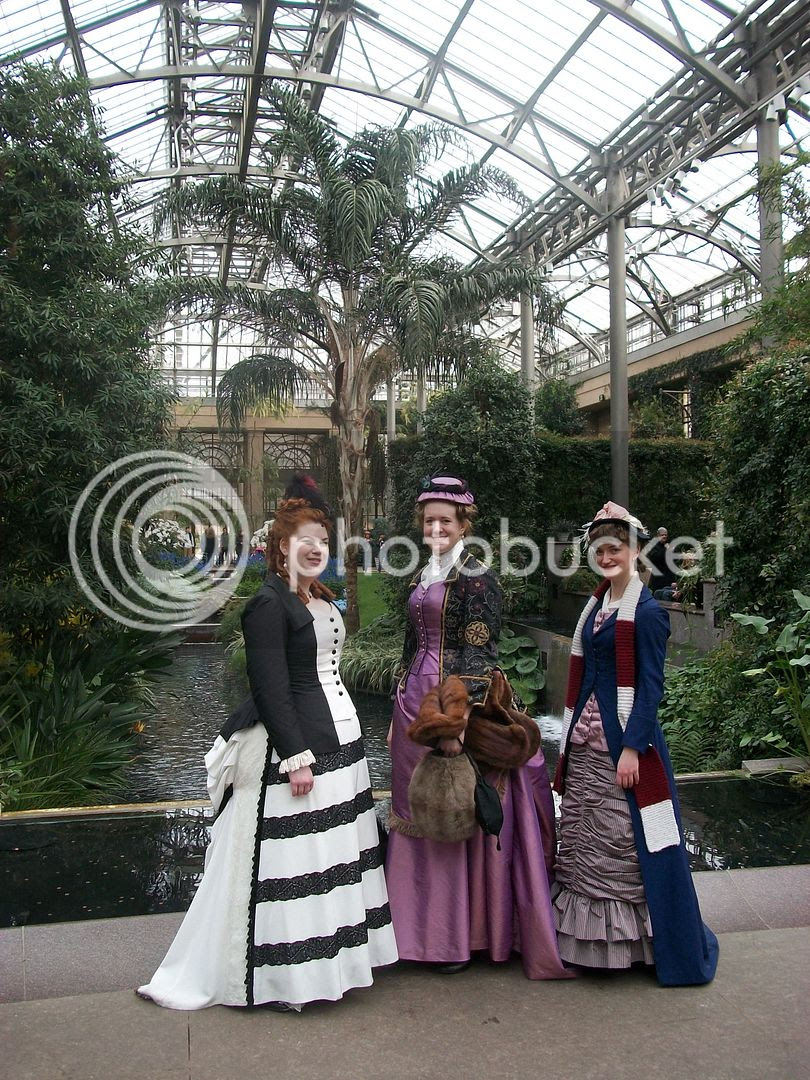 I'm going to be wearing this next weekend for my Birthday Outing, but I'll be wearing a coat over it then (because the forecast is Very Cold! I still need to make said coat...), so I wanted to get photos of it today.

I'm pretty pleased with it! It's fun to wear - anything with a train is fun to swan around in, really. (And it's already filthy.) There are some wrinklies around the shoulders, and I really should have padded the front shoulder-to-bust to smooth it out. I'll fall back on my old I'm-so-not-a-tailor protest there.

And it's warm! I was toddling around Haddonfield in 38F weather this afternoon to get pictures, and I was pretty happy! I'll be even happier when I locate my fur-lined gloves for next weekend. I do love wool. Winter clothes are the best clothes! Historical or otherwise.

I got a ton of pictures (see aforementioned swanning: fun), so here you go. 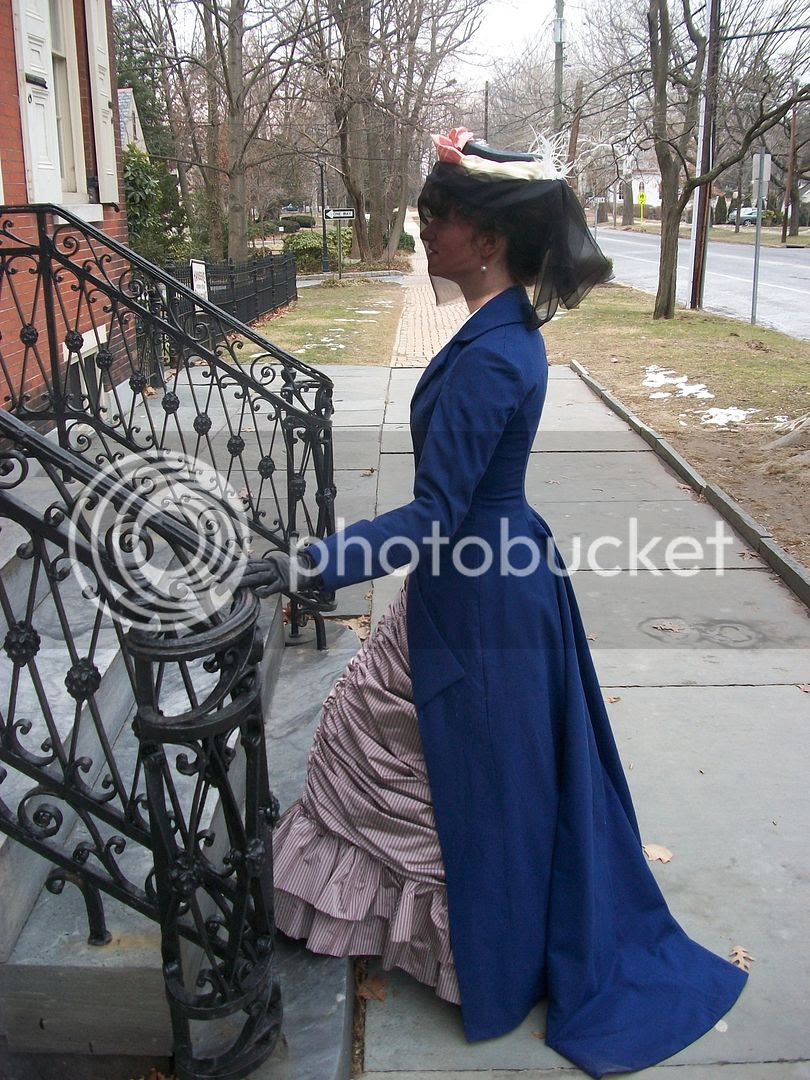