I got no good pictures of my outfit, so I must apologize! There were what felt like millions of people, and we only got to tour (or should I say "tour", as no one told us anything about it, we just walked on, walked off) one ship. But I got to see my friends, and we had a lovely lunch at City Tavern, and I enjoyed my sail on the When and If immensely. The crew were very nice to me, and didn't act like they thought I was a madwoman, dressed like that all by my onesie...even if they really did think so. ;)

If I find any more pictures later I'll update, but for now you just get three.

So, this week I worked on Regency Tall Ships Things, unsurprisingly. Not much worth taking pictures of, which will make for a boring post, sorry. I'll make it up to you next week!

First off, I finished shaping my first-ever straw form...which I'm promptly handing off to Robin, who doesn't mind taking my experiments off my hands! It's a little wilty this time, but it's not bad enough to put me off straw forms forever! ;)

Although, I did end up buying a new roll of buckram. I was considering a straw for myself, but I'm familiar enough with buckram forms that it'll be quicker and easier to make a new buckram bonnet for Tall Ships instead! I got a nice bit of that put together yesterday; sewed the pieces together, got all the mulling put on, and started covering it in red satin. I think it's going to be quite nice.

A red bonnet and a red spencer! The body of the spencer's put together, so all I need to do is sleeves, trim, and fastenings. I didn't want to make the collar very heavy compared to the spencer (it's linen), so I used two layers of silk organza rather than the canvas I normally would. Wasn't entirely certain it would work as nicely, but it definitely does! I do love pad stitching. 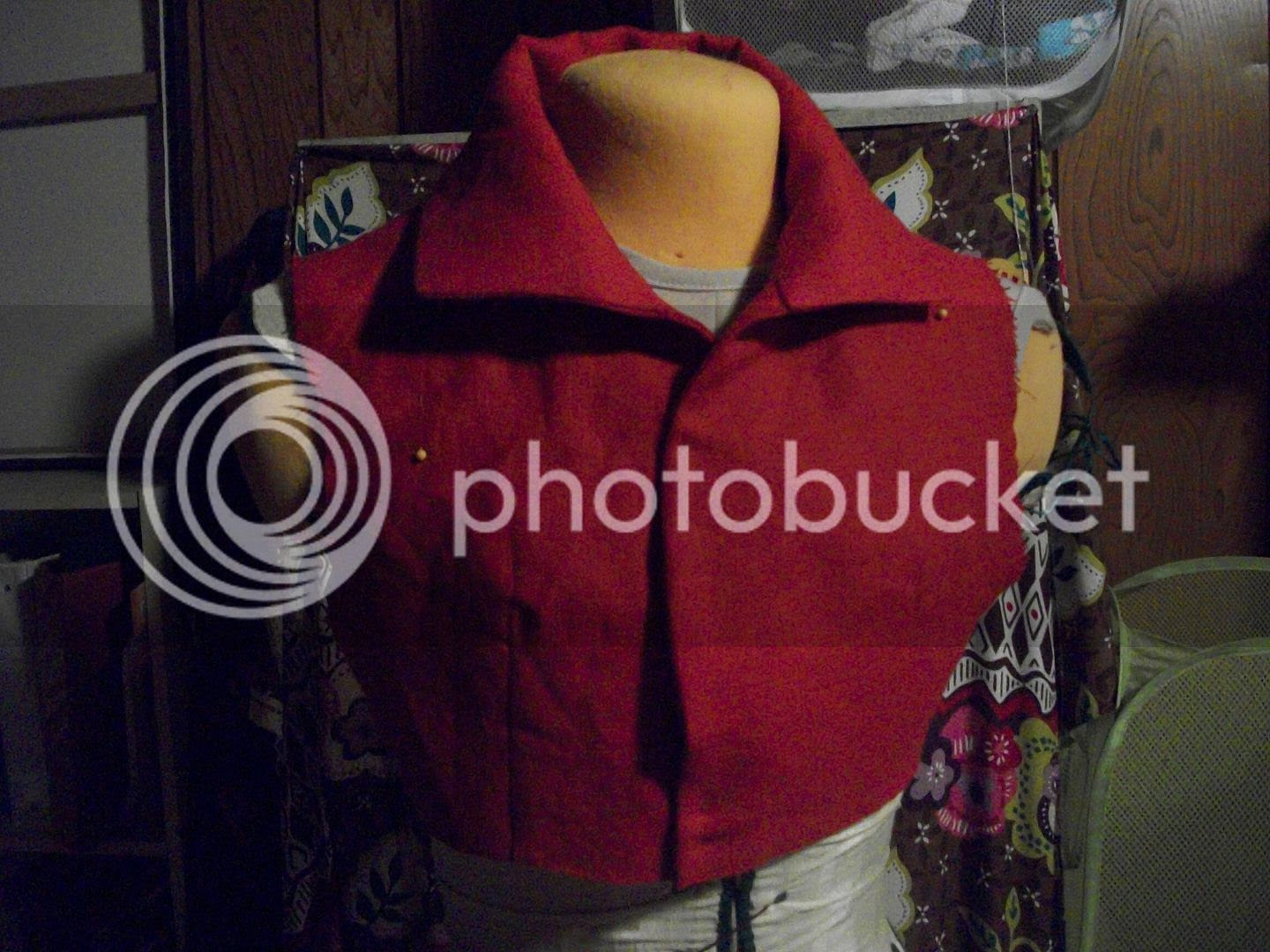 Posted by Amanda at 9:28 AM No comments:

The lovely Anneliese of The Young Sewphisticate has nominated me for a Sisterhood of the World Bloggers Award; thank you very much! I don't always "do" these awards that ask you to write out some Q&As, but I do appreciate the ones you've all ever given me in comments! (Hooray! I'm inspiring! I'm still tickled by this.) 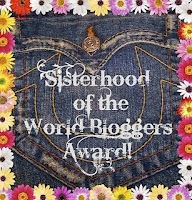 Although - they do always require you to nominate X more blogs, and I feel a bit like I'm perpetuating a chain letter. So as per usual, I'm just going to answer the questions, and that'll have to be good enough. :)


Why did you begin blogging?
I started a costume journal on a different platform about ten years ago, because many of the Big-Name Costumers I read were on there, and there was a great costuming community. When Blogger came out, I thought it would be a good place for me to have a slightly more professional costume portfolio (but only slightly!), apart from my daily "I sewed a seam"! Plus it's a way to keep in touch, as a considerable part of the costuming community has moved to a blogging style.

Who or what sparked your interest in costuming?
I originally started looking around at costume sites because my high school madrigal choir dressed up to compete at the Renaissance Faire (at which we used to place regularly, thankyouverymuch), and I thought everything in the costume closet was ugly! Not that what I made was much better...but I was lucky enough to stumble onto The Tudor Costume Page, with instructions for making an outfit for Kentwell, so I completely bypassed the Simplicity Horror Phase! Completely by accident, but I've been interested in accurate costume (or, you know...relatively!) ever since.

What do you find more exciting: the designing or the sewing process for your costumes?
Designing. And I find that more exciting than actually wearing, too...which is why I have such a pile of UFOs! I very rarely actually do any sketching, unless there are troublesome seam-lines; it's all in my head. I mentally sew every single seam in my head before I do so in reality, which also contributes to that pile...once I've finished it in my head I don't always feel the drive to complete it in reality!

What is your all-time favorite period drama?
If we're talking film? (If it's book...I couldn't choose, don't make me! So many books I love that I've never seen a satisfactory adaptation of!) Pride and Prejudice. Yes, that one. Yes, it's a common answer. There's a reason! It's wonderfully costumed, well-adapted from the text, overall well-cast, and it devotes enough time to plot development to satisfy me. Yes, every novel adaptation should be approximately six hours long, haha. Oh, and it's funny. I find Austen novels to be quite humorous, and not all adaptations translate that well to the screen. (Tangentially, while assigning Austen heroines to our group, a friend told me I'm Mr Bennet. I am surprisingly ok with this.)

If you could travel anywhere in the world for a week (all expenses paid), where would you go?
It's another tired old answer, but I'd love to see the British Isles! I'm poor so I've never been there...I'm a great fan of classic Brit Lit so I want to see all the places I've read about! A week might not be enough time, though...can I have a fortnight instead? ;)

If you could have a conversation with anyone from the past, who would you choose & what would you ask them?
Oh goodness, really? "The past" is a lot of time to choose from! Picking a bit randomly, I'd love to have Eleanor of Aquitaine tell me stories of her life!

Which do you prefer more: mornings or evenings?  Why?
Evenings. I like being awake in the mornings, too...but that requires actually getting up in the mornings, which I like much, much less. I don't really know why I function better getting up and staying up late, but I do! I'm not allowed to cut fabric past midnight, though...

What accomplishment(s) in the past year made you the proudest?
Are we talking sewing? I've decided we are. It's probably that I managed to meet a deadline, finish the Gainsborough Princesse natural form dress, and submit it to YWU's competition! I absolutely hate putting my costumes out there to be judged; I'm a very harsh judge of my own work and I always imagine others are too! It went over rather well, though I doubt I'll enter again.

What do you hope to accomplish this year?
Sewing again! Short-term (that is, by the end of November) I want to make a few new things for Gettysburg; longer-term, that is, next calendar year, I want to go back to Katherine Parr and finish her. The gown's in pieces, but I still have a lot of accessories to put together!

What is on your sewing wish list?
Someday I'd like to make a recreation of Mme de Pompadour's "coronation portrait" gown, done as accurately as I can, from the inside out. I've had the taffeta for it since a nice taffeta was $16/yd (and that was a lot for me at the time!) but not the skill...in the past couple of years I've started to think I could do it justice, but it'll probably take another ten years to collect the rest of the supplies!
Posted by Amanda at 1:23 PM 4 comments:

Email ThisBlogThis!Share to TwitterShare to FacebookShare to Pinterest
Labels: catch-all

Finished! Well, except that I need to order more white silk ribbon for the drawstring...I discovered this afternoon that I'm out, and used stiff unpleasant poly for now.

Photos first, and then I'll complain about tucks... 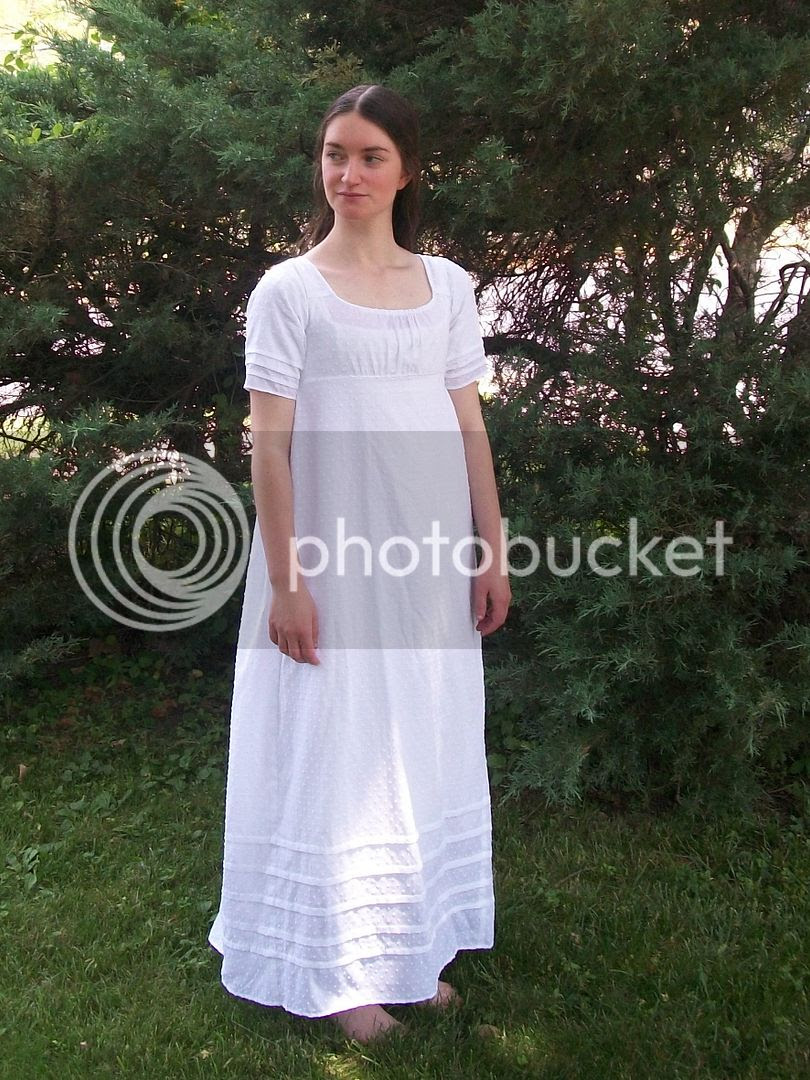 Modeled with very historically-inappropriate hair and footwear (for my age, anyway!), but I just wanted to get this documented and out of the way.

New jacket and a Regency dress

Wotcher! Long time, no update! I did warn you...but we should be back to more regular updates around here soon. I'll try to get back into weekly posts, providing I've done something worth posting about!

I've just started volunteering with the Indian King Tavern in Haddonfield, and yesterday was their annual "skirmish" in front of the Tavern (blocking Kings Highway off and making drivers mad, it was great fun). There was never any actual fighting in Haddonfield during the Revolution, but the public does love that kind of thing - and the numbers of visitors were quite good! I'm new enough to not be confident in any of the little information I know about the site, so I sat outside and sewed a pair of mitts - something I am confident in. ;)

And I had a new jacket to wear. I made it a couple of weeks ago, having decided I really needed a specifically light-weight 18thc outfit for summer. 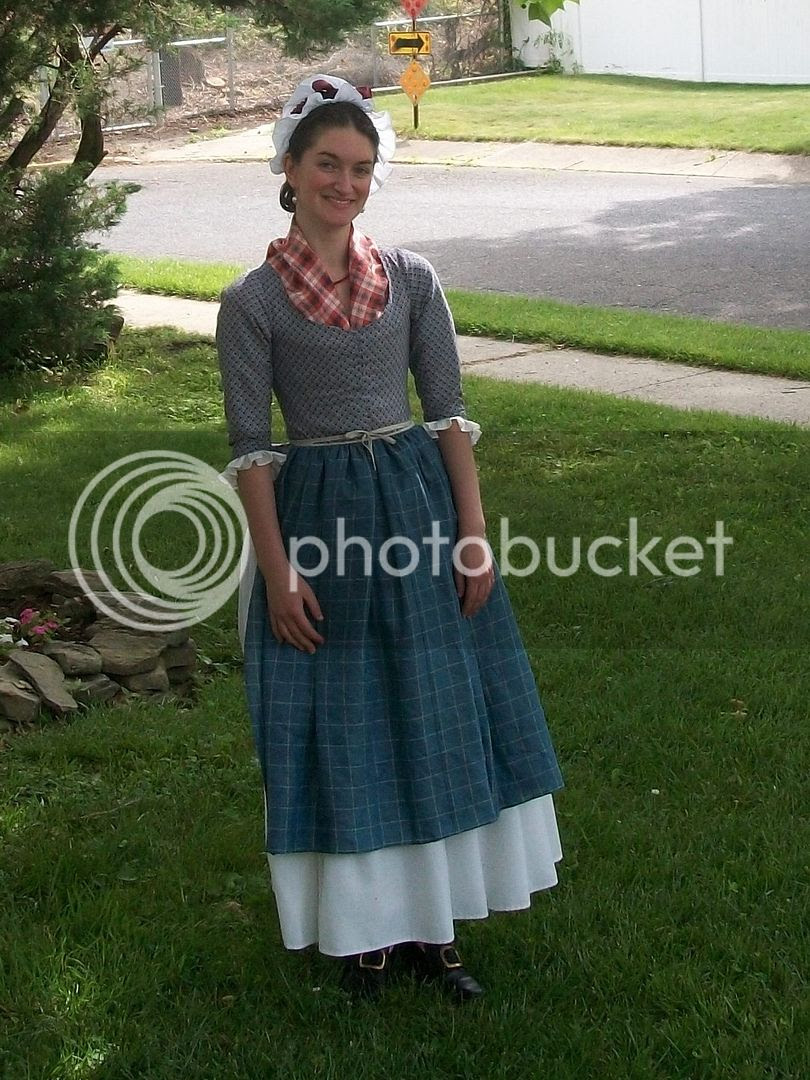 Of course it ended up not being disgustingly hot on Saturday...but I wore it anyway, because, hello, new jacket!