Showing posts from May, 2014
Show all

- May 25, 2014
Hey, I'm remembering to update promptly; go, me! No pictures though, so it's a boring update. Currently I'm knee-deep in the early 19th-century...next Sunday there's a group of us taking a trip to Riversdale House in Maryland, and since it was built in the early years of the century, naturally we're dressing Regency. As you might know, I've got quite a sufficiency of warm-weather Regency dresses...but I want something new! As usual. To that effect, I've got a light blue, lightweight linen spencer half-finished, and silk in the mail for a new, simple bonnet. And I'm still poking away at the other Regency bonnet I'm making for a friend...it's at the be-flannel-ing stage now. And I've been really starting to collect my thoughts and materials for the Six Wives project, which I don't think I've talked about here. The Ren Faire in our area has changed their scenario for this year - they've always done QEI, but this time they'
Post a Comment
Read more 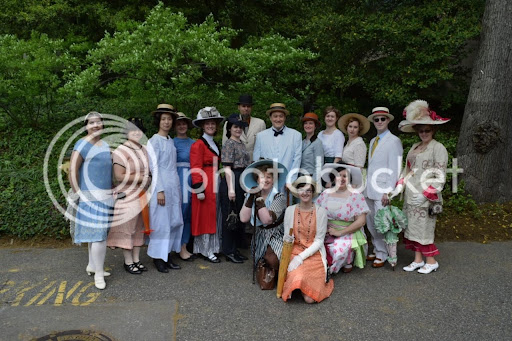 Mentally I've already moved on to the next (Regency) event, so it feels a bit disruptive to go back to the 20thc, even if it was only a few days ago! So you get a quickie post without too much narration. (All photos in this post are courtesy of In the Long Run , unless otherwise noted.) This past Saturday, I went to the Winterthur estate in Wilmington, Delaware to see their Downton Abbey costume exhibit. Here's our group shot - there were quite a lot of us this time!
2 comments
Read more 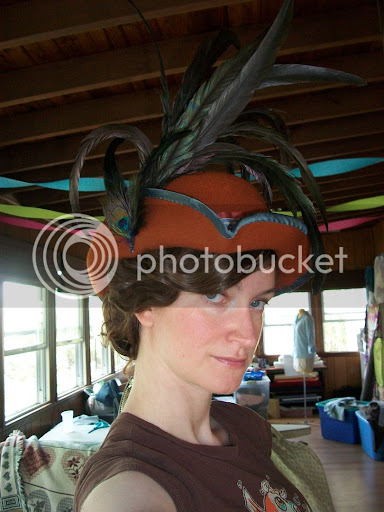 But I'm in crunch time, and I need to sew more than I need to blog! I'm in wearable shape - the hat and blouse are finished... Yes, it's a demented pirate hat. ...the petticoat is finished (it still needed a waistband), and the skirt will be finished as soon as I finish sewing the snaps on. I wanted a jacket as well but I don't know that that's going to happen in three days, all of which I work!
Post a Comment
Read more 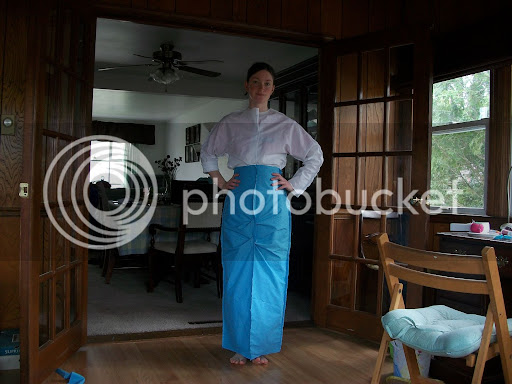 Let's try to get back into a weekly update here, shall we? Mmm-hmmm, we'll see about that! As you know, half this week was spent hunting the camera cable and recovering from Fort Fred, but I did manage to do a couple sew-y things, besides washing and putting away all my things from Fort Fred. (This doesn't always happen in a timely fashion, so it's noteworthy!) First, I darned the hole in my striped petticoat that I wore to Fort Fred. Where did the hole come from? Who knows! Very Mysterious. But now it's all Authentick and Liv'd In, or something. And then I worked on the mockups for my 19-teens skirt and blouse. I'm going to see the Downton Abbey costume exhibit at Winterthur Museum in Delaware with my friends on May 17th, and of course we're dressing for the occasion! And of course I need something new. I've had some light blue wool in the stash that's wanted to be a teens suit for forever, and I bought a light blue and white rayon pri
2 comments
Read more
More posts