Saturday night I took a jaunt up to Trenton for the 18thc ball - the ball and battle of Trenton reenactment are the same weekend, you may recall we did both last year. I think balls are generally more fun than battles though, so I don't feel the need to see the battle reenactment every year.

The ball was overall very enjoyable. It was in the Masonic Hall this year rather than the nearby hotel ballroom...which was much more scenic, but somehow had even less space for dancing! It's a nice-sized room, but as they insist on serving food and having tables and chairs, there was barely room for two sets of dancers. And I do mean barely! Take a cue from period balls and have the food in another room, and just have chairs round the perimeter...or if you can't get another room, don't have much food at all, I didn't show up because I heard there'd be sammiches. :P Really, I only danced two dances because I found the crush so unpleasant!

Still, I'm always happy to sit and watch a ball, and chat with my friends! Which is good, as that's mainly what I did.

I trimmed up my red/green/yellow striped 1770s dress a bit more for this outing - still not quite as much as I'd like. Still plan to do two more rows of puffer trim on the skirt, but I decided I wanted to enjoy my Christmas rather than doing last-minute sewing! Still looked quite nice if I do say so myself. 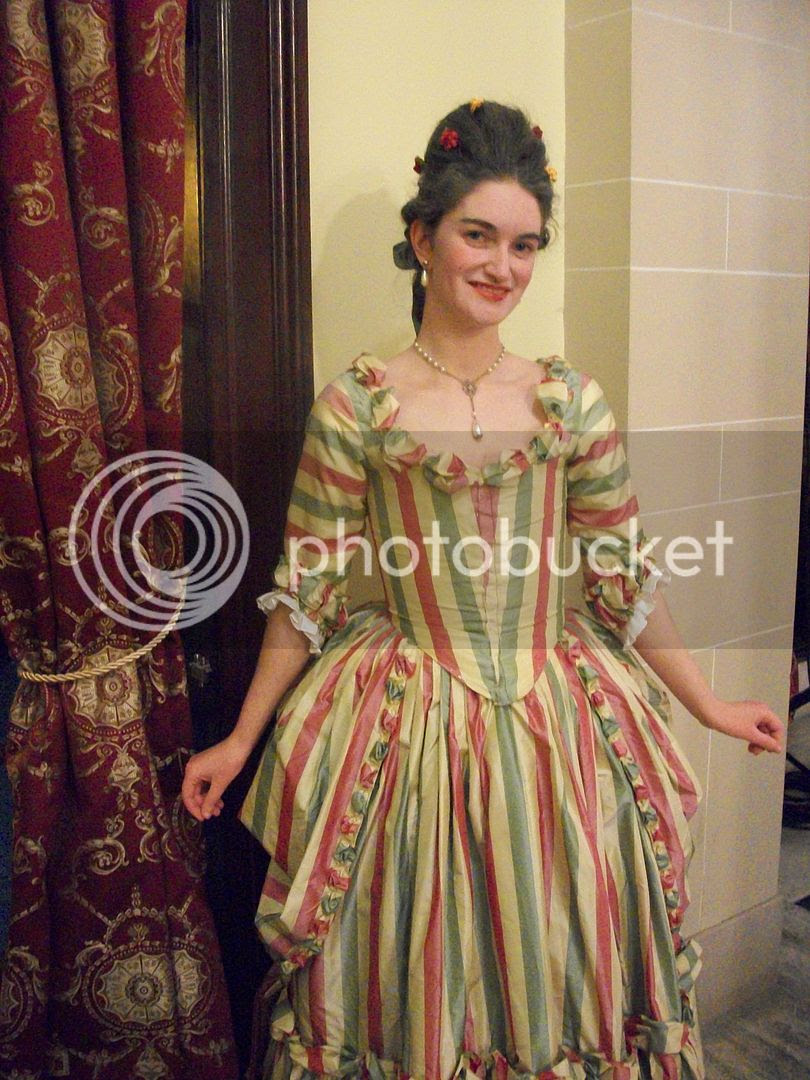 Over the weekend, I went down to New Castle, Delaware, for their Dickens Experience/Spirit of Christmas event - all the historic houses in Old New Castle are decorated with greenery and fruit, most of the sites are open for tours, there are a few dramatic readings/performances, and general shopping and dining. I'd never been down there before, and I thought it was quite charming. And very historical! I don't know the finer points of architecture, but it at least looked like all the buildings around Market Square were 18th/first half of the 19thc. If only we'd had a bit of snow...but it was about 70*F that day, not wintery in the slightest! I made it a point to demand snow or at least cold for next year, if one can demand such a thing!

Anyway, I'd worn my "marquee" dress, mainly so I could get photos of it and do this writeup! If I hadn't wanted to do that I'd have gone for my taffeta instead...I wasn't sweltering, quite, but did start to get uncomfortable in some of the heated buildings. Wool flannel is a lovely thing, and not made for summer weather, thanks.

I still have to play catch-up with my new things from Gettysburg, but I'll do this one first. My friends and I decided we finally wanted something in the correct era for Allaire Village (they're set in the 1830s), to go up for one of their Christmas weekend events. It was a bit of a crunch, as we only had 3 weeks in between Gettysburg and Allaire, and one of those involved Thanksgiving. 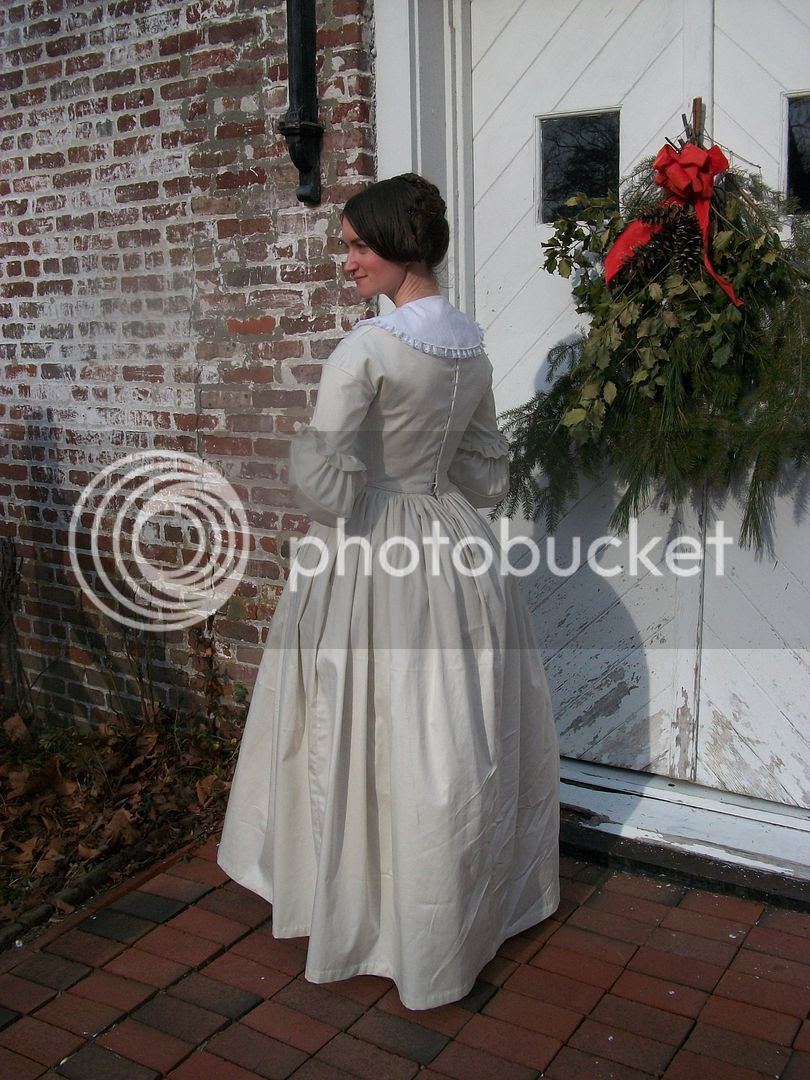 Worst blogger ever! I didn't make a point of taking photos of my new things at Gettysburg, though...and who cares about the old ones? I had the genius idea of buying a cheapie tripod so I can go out and get my own costume shots, and don't have to depend on my poor family members for them. (And yes...it really has taken that many years for me to think of getting a camera tripod. I am so incredibly astute, you guys.)

Anyway, this weekend is a local costume weekend - 1860s today and a new late-1830s tomorrow that I'm, er, still putting the finishing touches on. So, there shall be pictures of things! Just not tonight, as I have to hem those sleeves.

So I'm going to leave you with a small post on the two spoon bonnets I made for my friends - not specifically for this event, but since the frames have been done for ages, this event lit a fire under my bum to actually finish them! They're both made from a Timely Tresses pattern, which I must take a moment to talk up - I love every pattern I've ever used from them; they go together so nicely! This one is the Mildred Augusta. (The bonnets ought to have blocked tips, but...that sounded like work.)