- April 14, 2017
Part 1 recapped my reason for making a silly 18thc hat (construction details in the linked post) and a dress to go with it; now let's talk about the dress itself. First and foremost...it's an Ikea duvet cover. 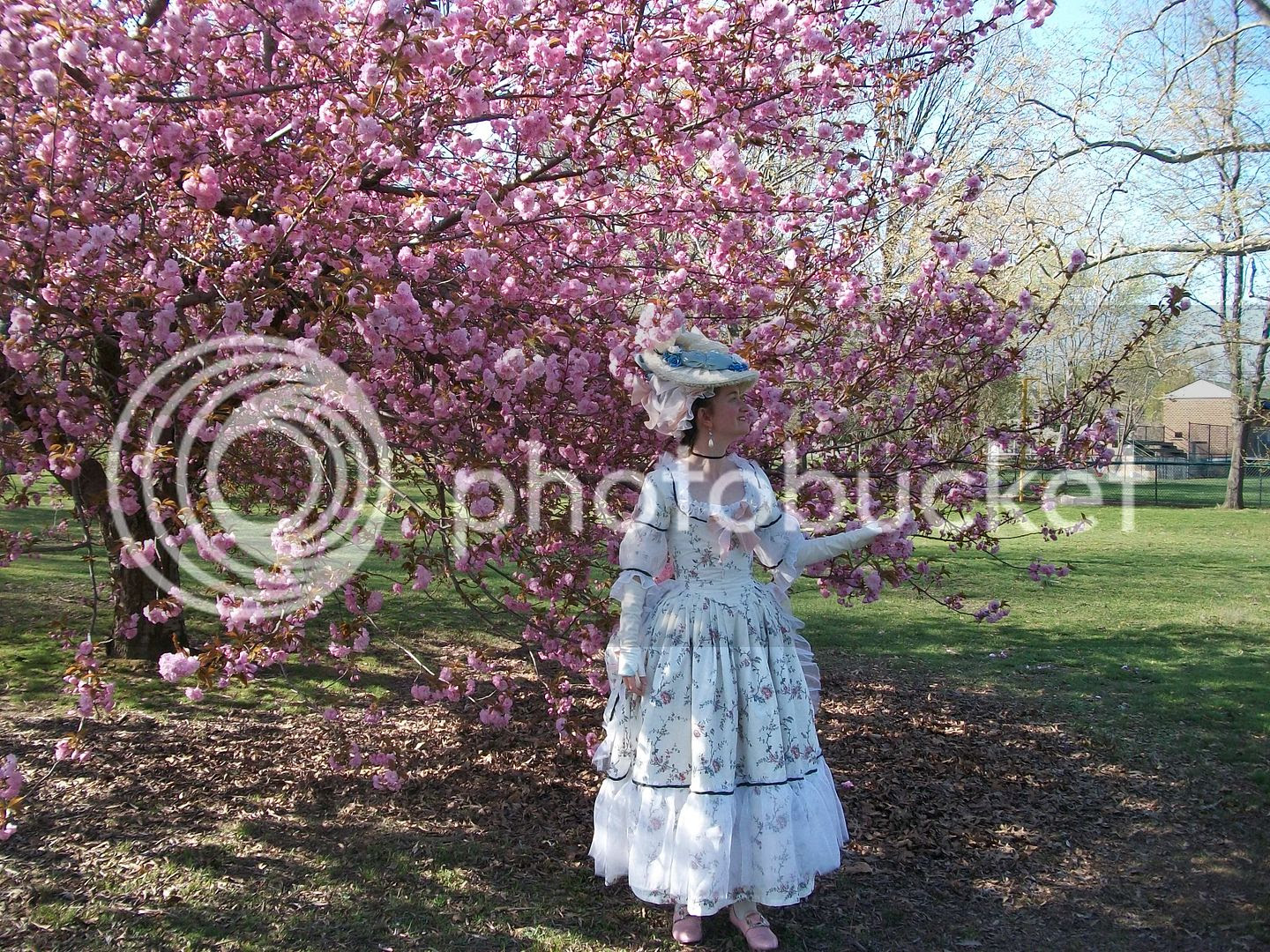 And a very nice duvet cover it is, too! (I was amused to learn that Katherine C-G owns it as well - in use as an actual duvet cover! I take this to mean we both have excellent taste.) 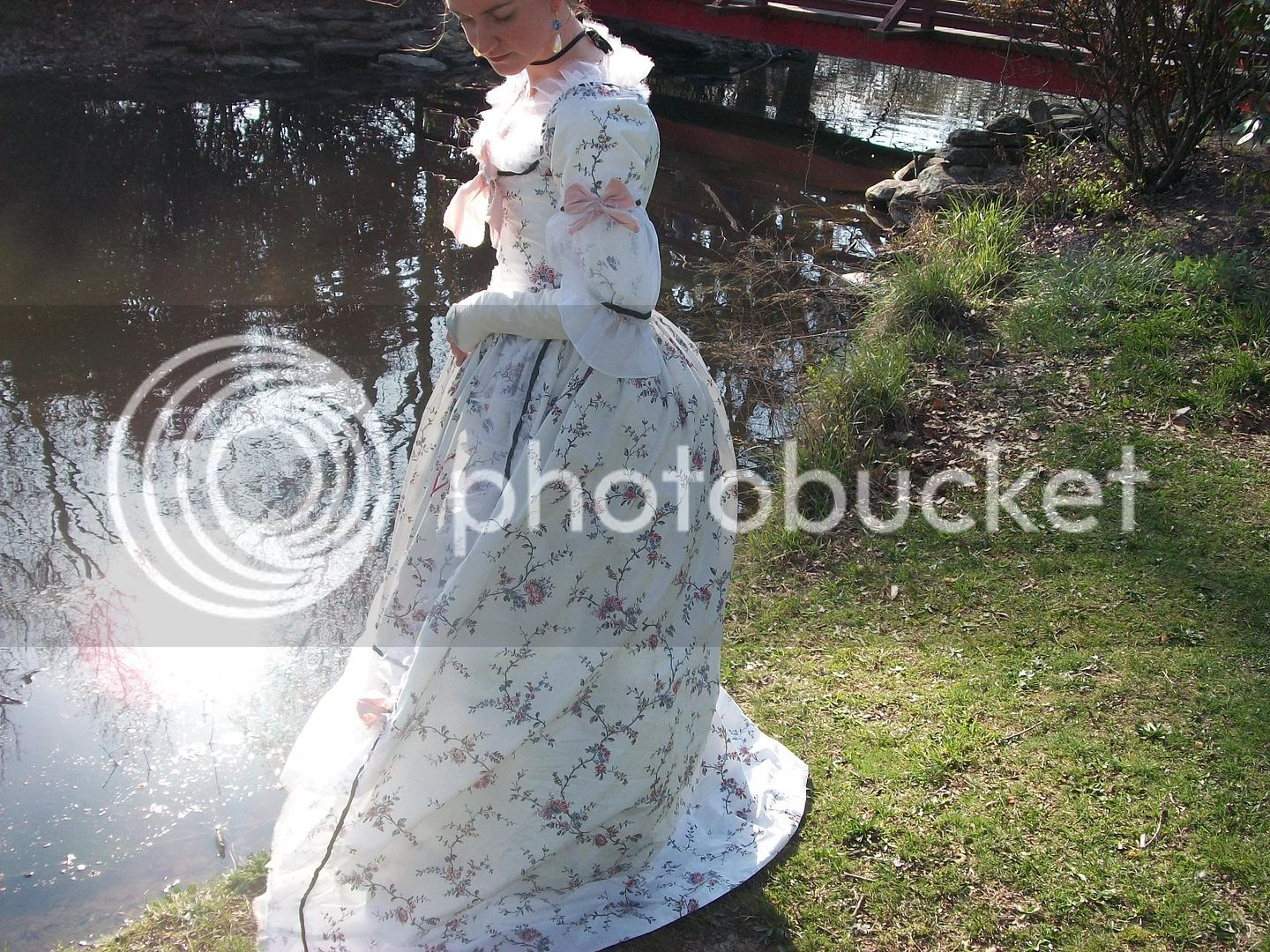 I'm extremely pleased with how it came together. My costume tastes don't generally incline toward the "fluffy", but I make an exception for the ridiculous "pastoral" 1770s dresses! "Look, I'm just like a shepherdess!" Yes, those long skirts, gauze trimmings, and pastel colors are totally practical for a  shepherdess. Totally. 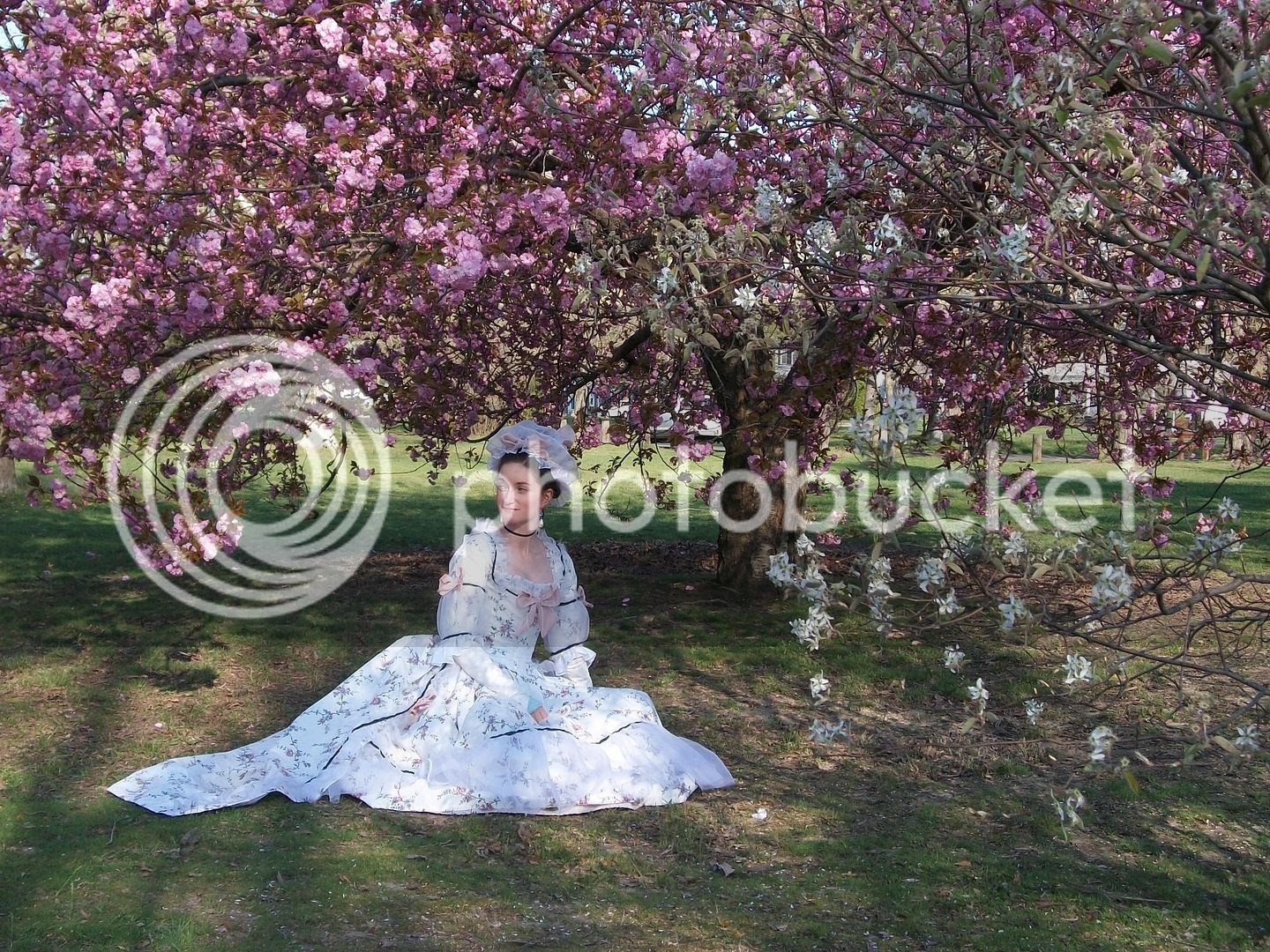 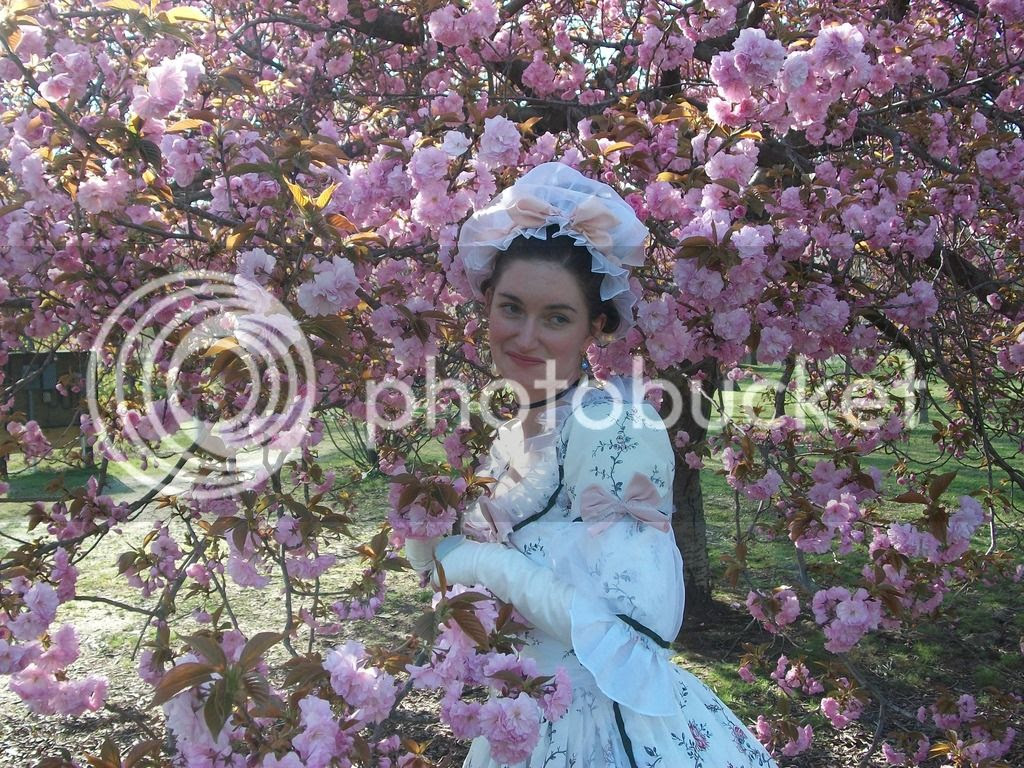 For once the weather's cooperated, and gave me peak blooms when I finally got my car back to actually be able to drive to the park for a photoshoot! I got some pictures of my outfit at the party on Saturday, but dress pictures are never my top priority at fun events, and I was missing a few tiny pieces that I'd either run out of time for, or managed to leave at home. Not to mention I didn't get any shots of the skirt unlooped. Today I made it a point to drag the train all around the park to get some! For Saturday I'd left the silk at home that I was planning to use for cap bows and puffs - so I had a sadly naked cap! (Though I wore my hat most of the day so it didn't matter very much.) I'd also run out of time to fix the tucker, that somehow I initially mismeasured and made 4" too short. Ooops. So, no tucker for Saturday! It's such a little thing, but it does make the bodice look more finished when it's present. 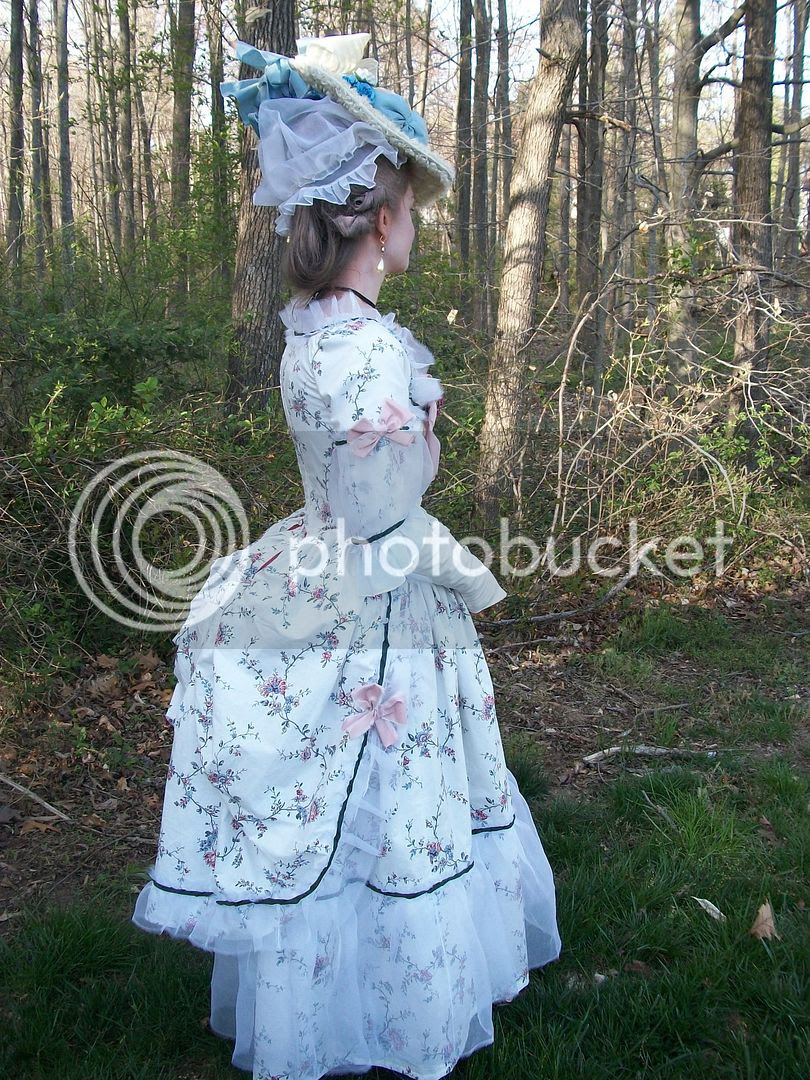 I also powdered my hair and did 18thc makeup on Saturday but not today. I enjoy doing 18thc makeup, but it's pretty harsh-looking in natural light (better in candlelight), and I'm vain enough that I wanted some pics of me in this dress where I don't look dead. ;) 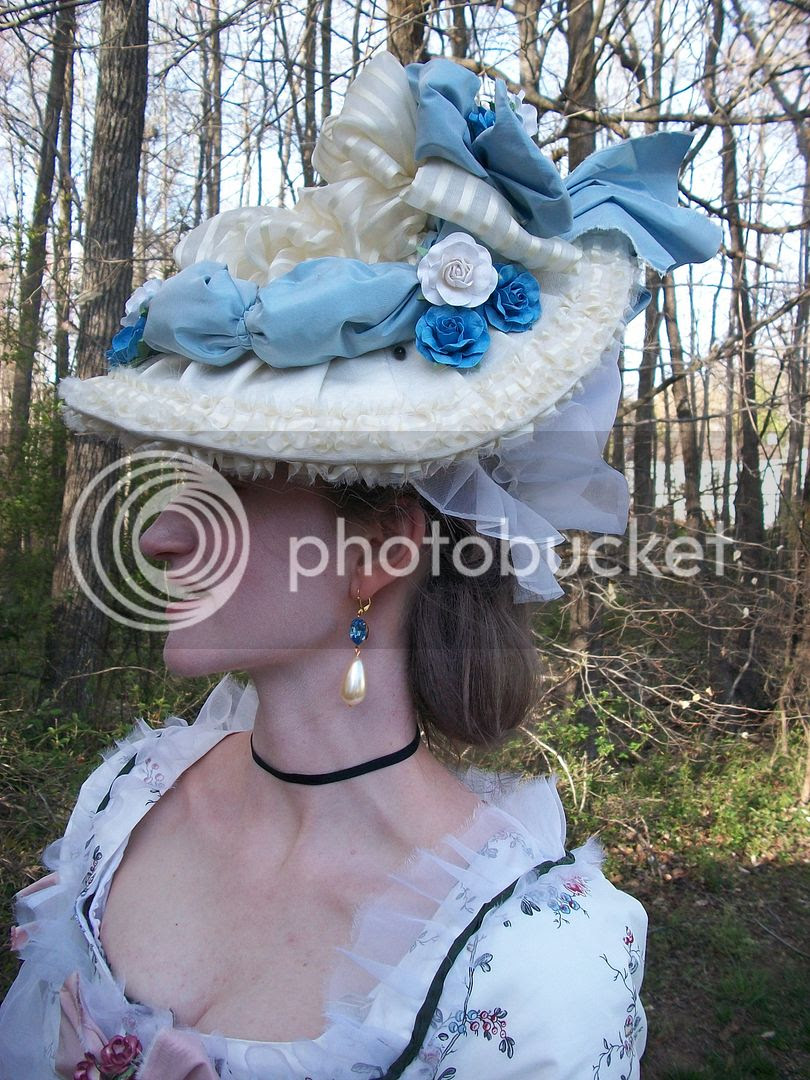 And hair powder is more effort than I wanted to go to for an hour's shoot in the park! Not to mention, the pink stuff is an awful mess.  (The pink effect is fairly subtle on brunette hair with this amount of powder; it's a little more visible in some of the shots in Part 1.) Iron oxide is what makes the pink pink, and well...
And that's having worn a powdering jacket and scrubbing off my neck before dressing, believe it or not! Once you sweat into it, it's pretty well set, as my soaked, scrubbed, and washed shift that still has pink marks will tell you. Not that I'm warning anyone off colored powder, as I think it's fun and I'd love to see more of it! Just keep in mind that your things might stay pink for longer than you thought... 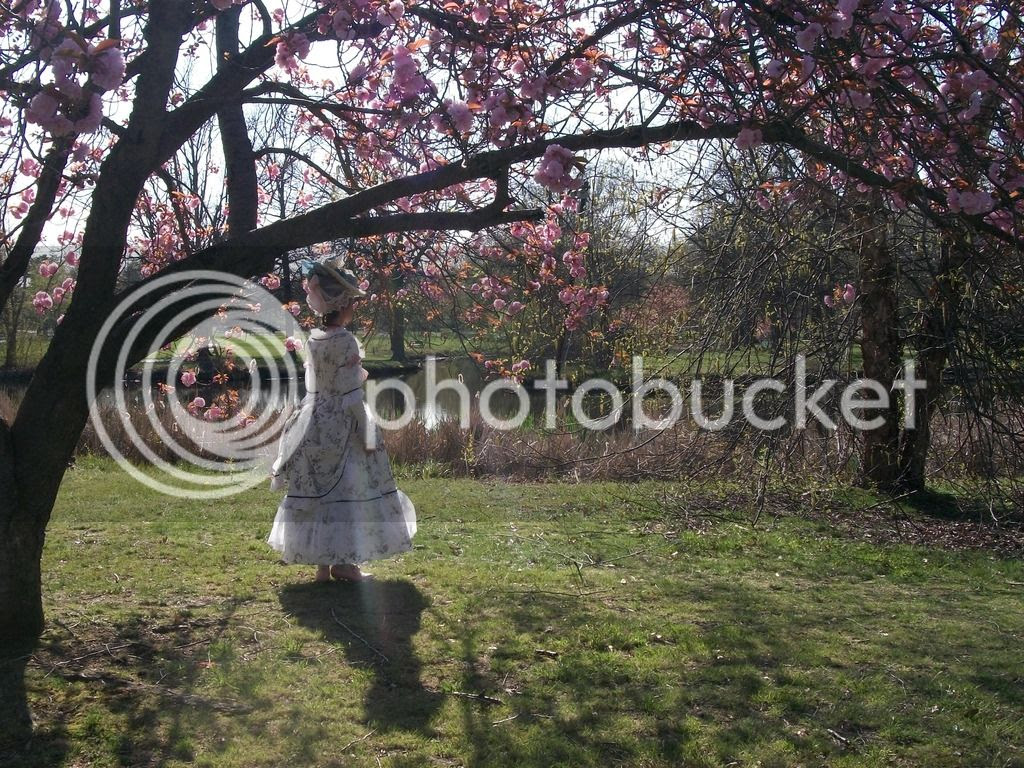 Now, let's do a bit of the nitty-gritty construction detail...

As I said, it's made from an Ikea duvet cover! King-size, as this particular design only had the floral print on the front of the cover (striped on the back). Just enough! I ended up piecing the hem of the gown as I decided I wanted a train, but it's not very visible with the pattern. All hand-sewn "in the usual 18thc manner" (I have other posts with a bit more detail on that), as per usual.

The fluffy gathered trim is silk organza from Dharma Trading. I decided to live dangerously and not hem any of it, as it's all ripped straight across the grain. It doesn't do too badly when the skirt's looped up, but collected quite a few leaves and twigs in the park when I let it down... The silk trim on top of the organza is just strips of taffeta, with the raw edges folded in, and messily twisted and tacked down. It's dark green shot with navy (scraps from my New Castle 1840 bonnet, actually!). I made a few bows from light pink taffeta fabric scraps and just pinned them on where I thought they'd look nice - or silly. I looped up the back of the skirts with loops of ribbon and (terribly ineffective) buttons; at some point I'll probably replace them with buttons with a shank that might actually hang onto the ribbons! They had to be pinned in place as they kept unlooping themselves on Saturday.

The mitts are made from ivory silk taffeta, lined in white cotton, and the points are faced with a tiny, tiny scrap of seafoam-green shantung (this is why I hoard scraps. Also, thanks Alice, for finishing my second mitt!). The tucker and sleeve ruffles are a matching set made of of silk/cotton batiste; they're pleated to cotton twill tapes and roughly basted in, so they can be worn with other outfits. And the cap is silk organza, trimmed with strips of china silk!

Everything is my own pattern; I redrew the side-back seamlines on my standard 1770s bodice pattern, and enlarged my basic cap pieces rather arbitrarily. Yay for being very well set for the last quarter of the 18thc! The basic dress and petticoat took maybe a week and a half, but the gathered trim took a lot longer, as I kept getting unutterably bored with gathering!

A few in-progress shots. I didn't take very many, as construction was nothing unusual! It's a very basic anglaise. 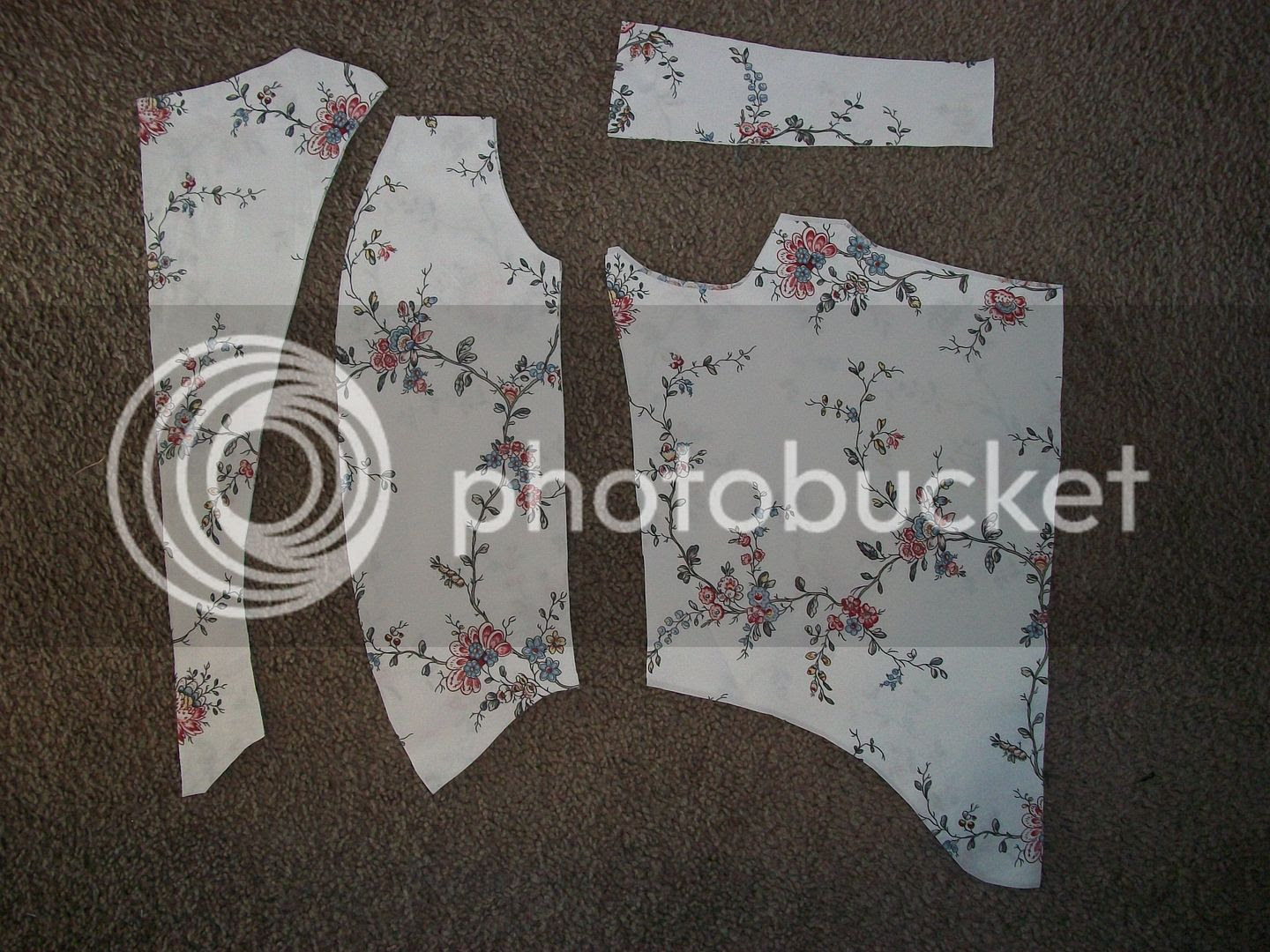 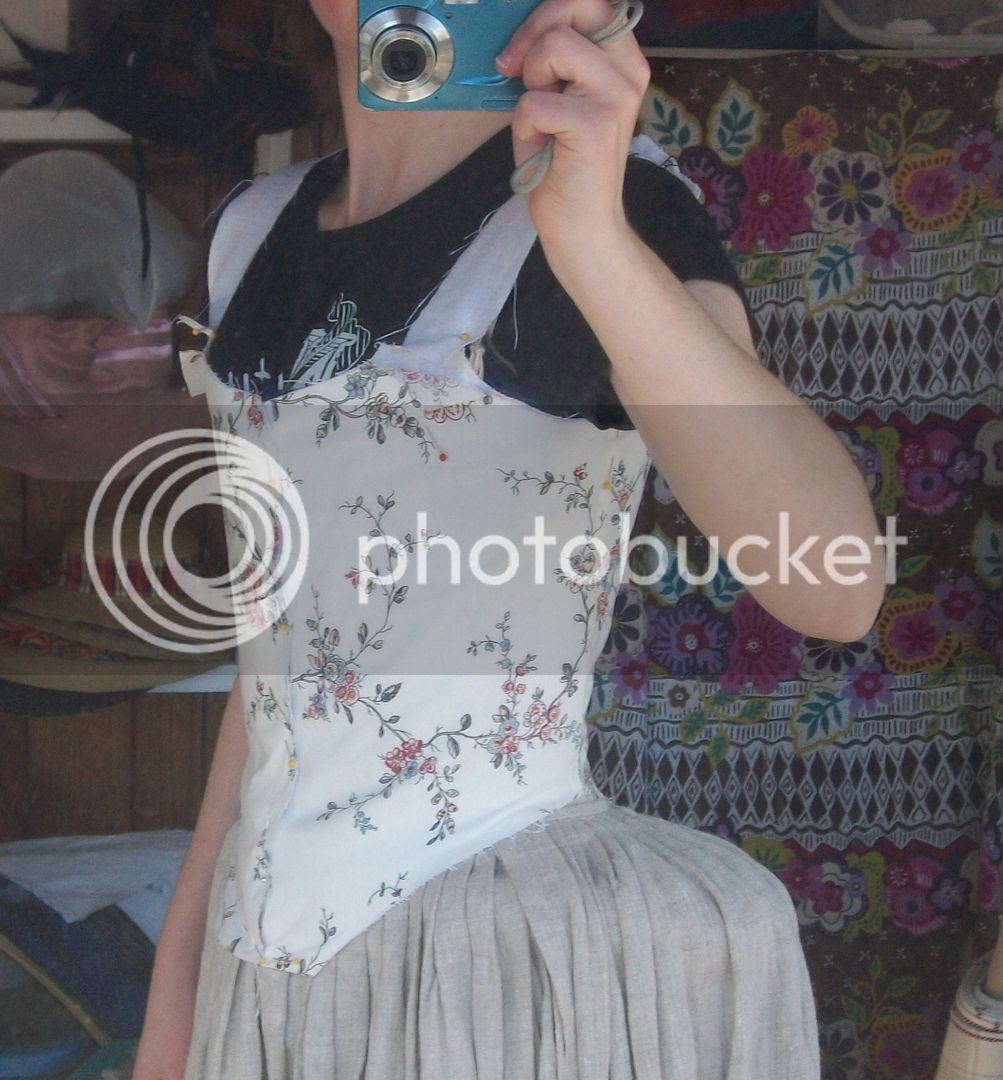 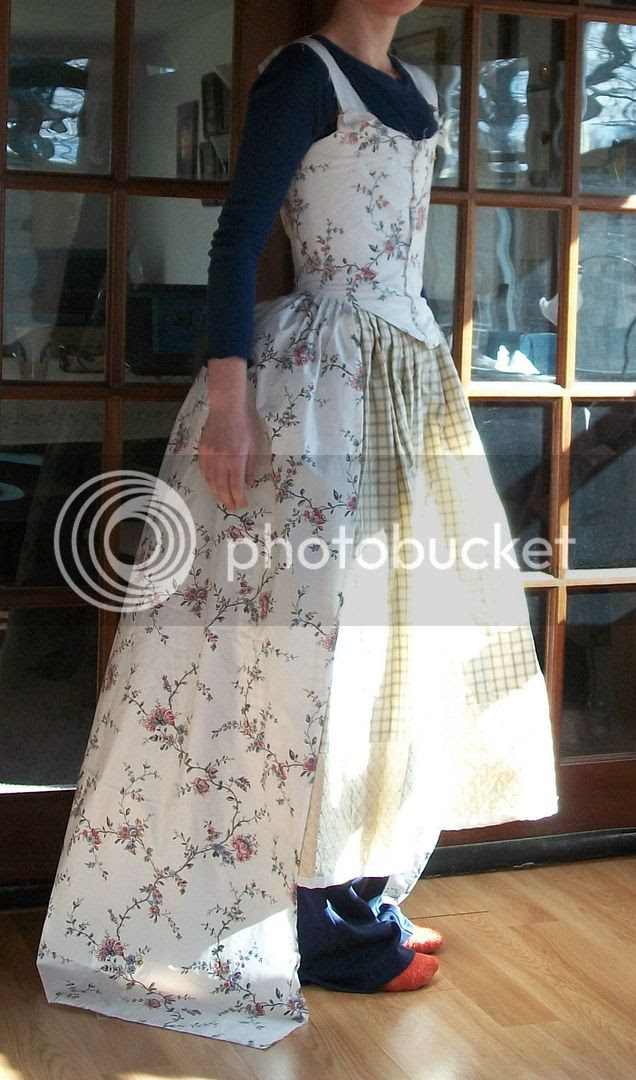 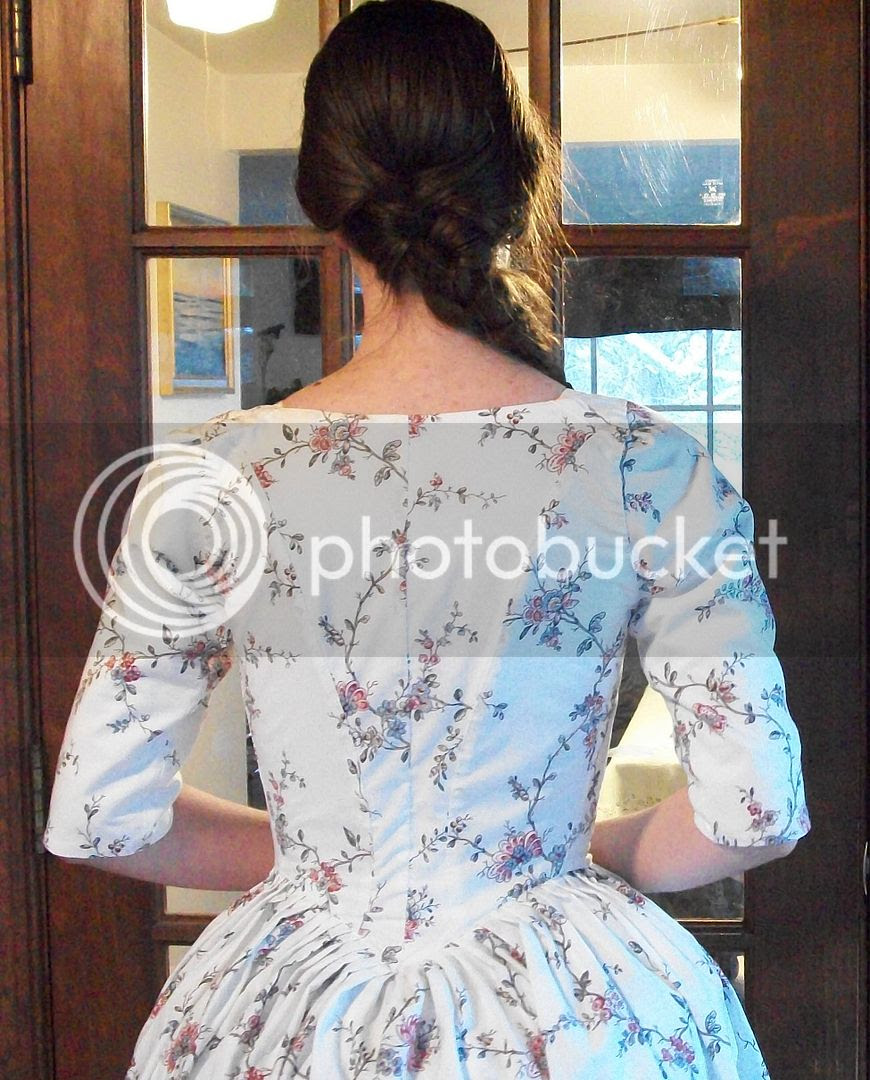 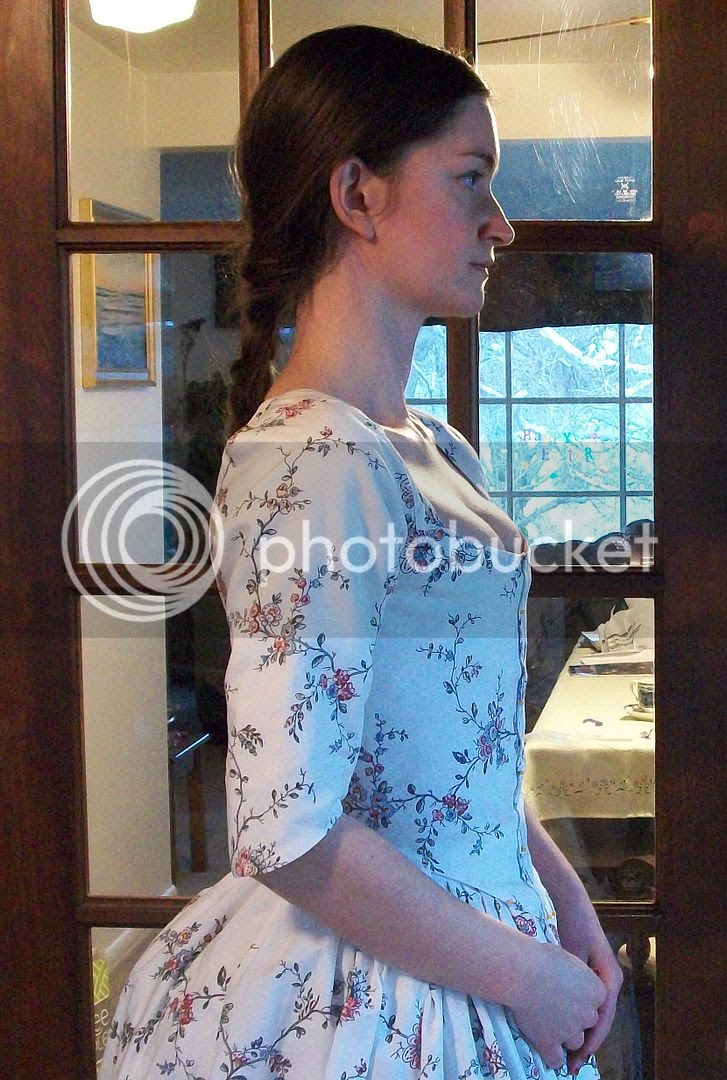 (And if you have questions about the height - or lowness - of the neckline, give this CW post by Abby Cox a read!) 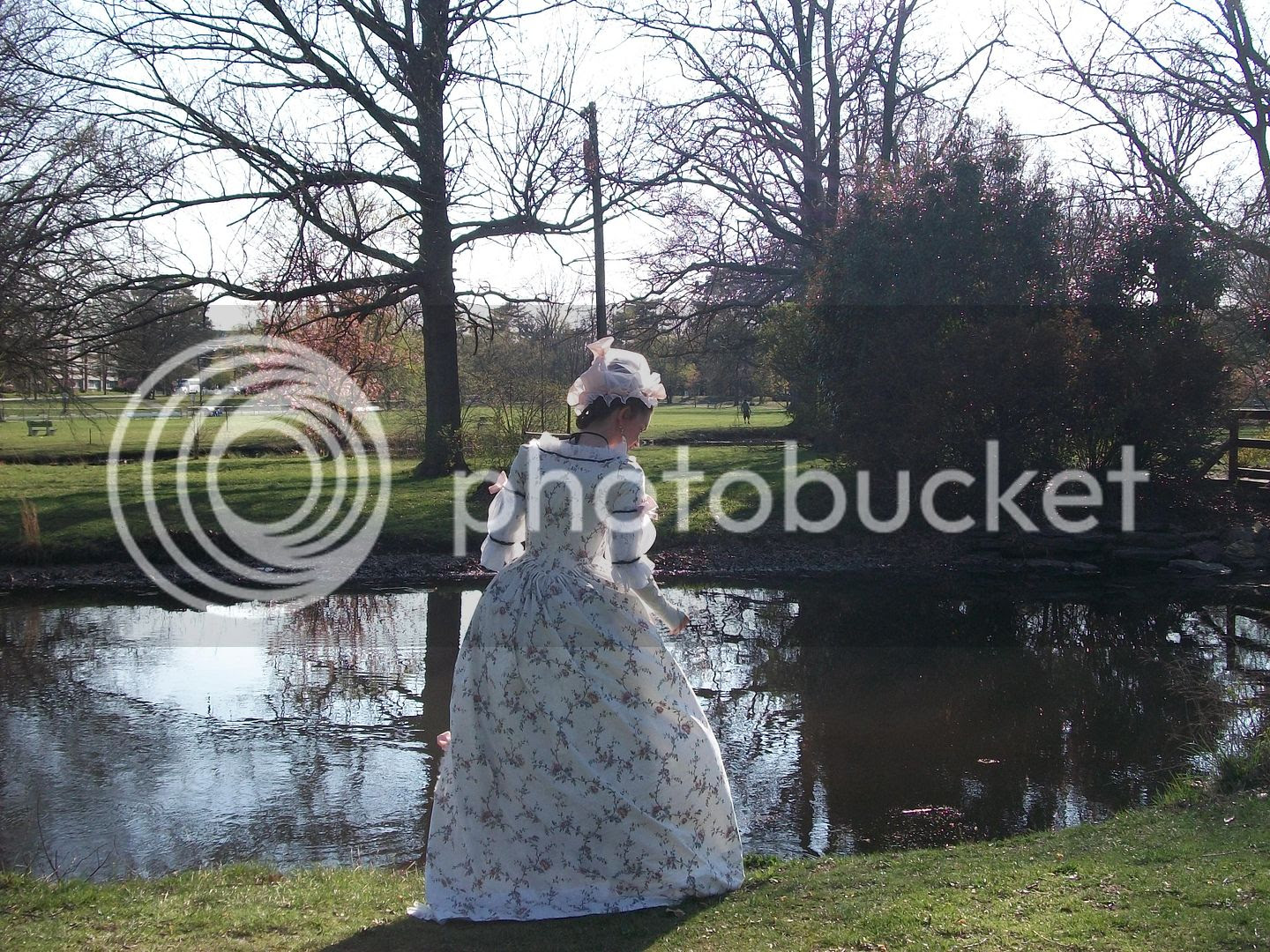 And a few more photos - because I took tons! What can I say, the pink trees were just too perfect. :) 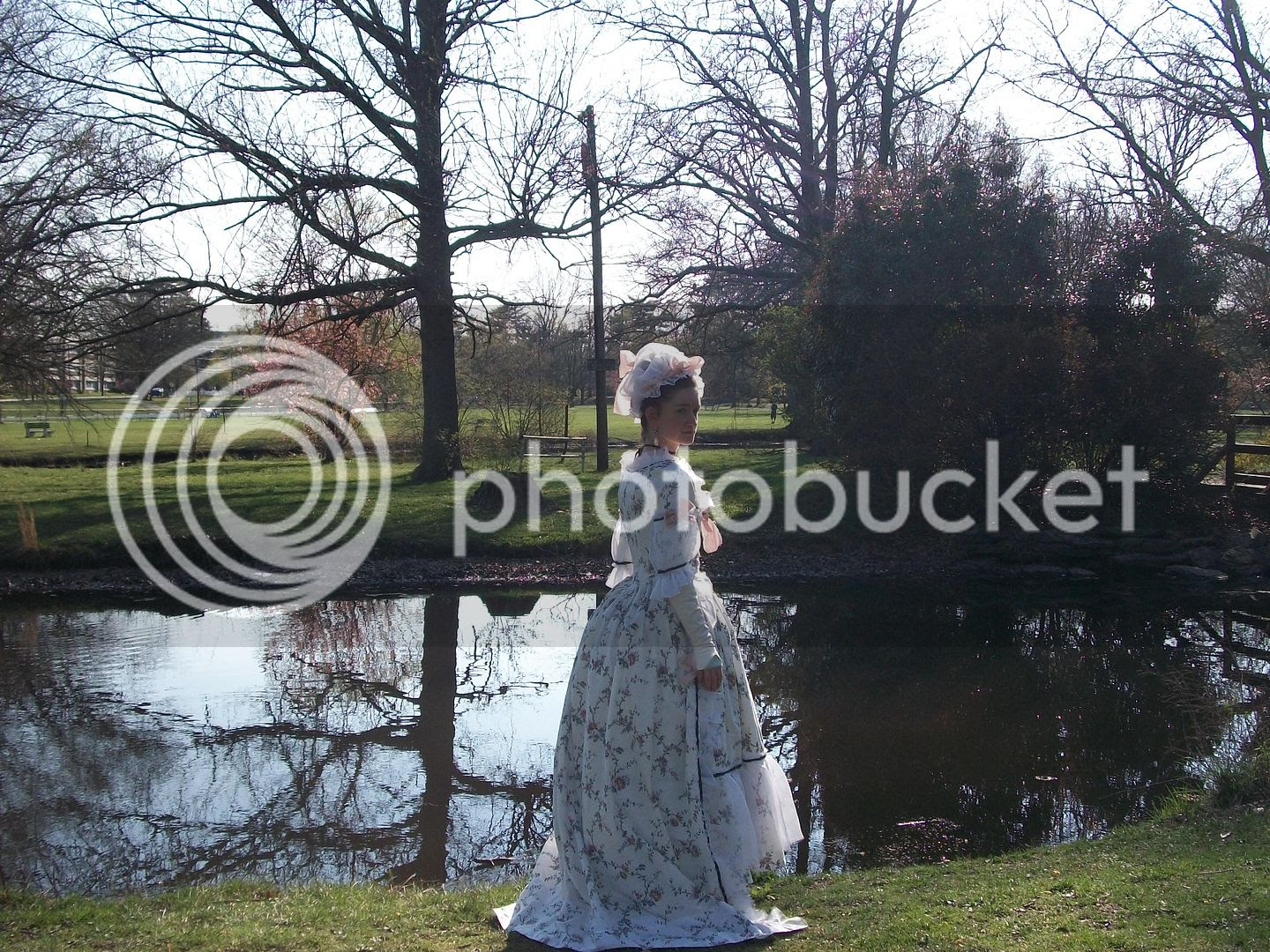 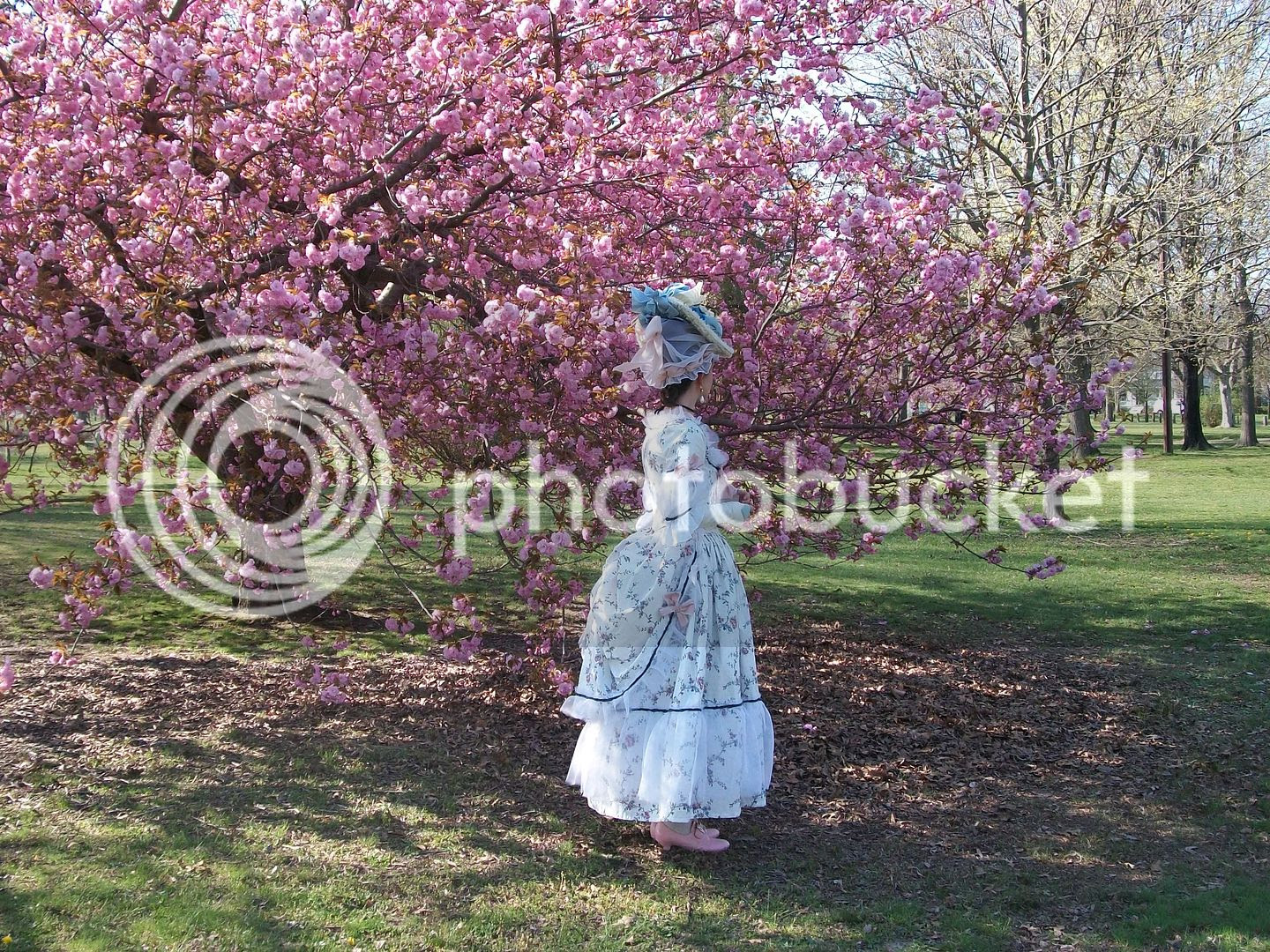 I like the skirt looped up better, but down is pretty too. Just not when it's collecting leaves... 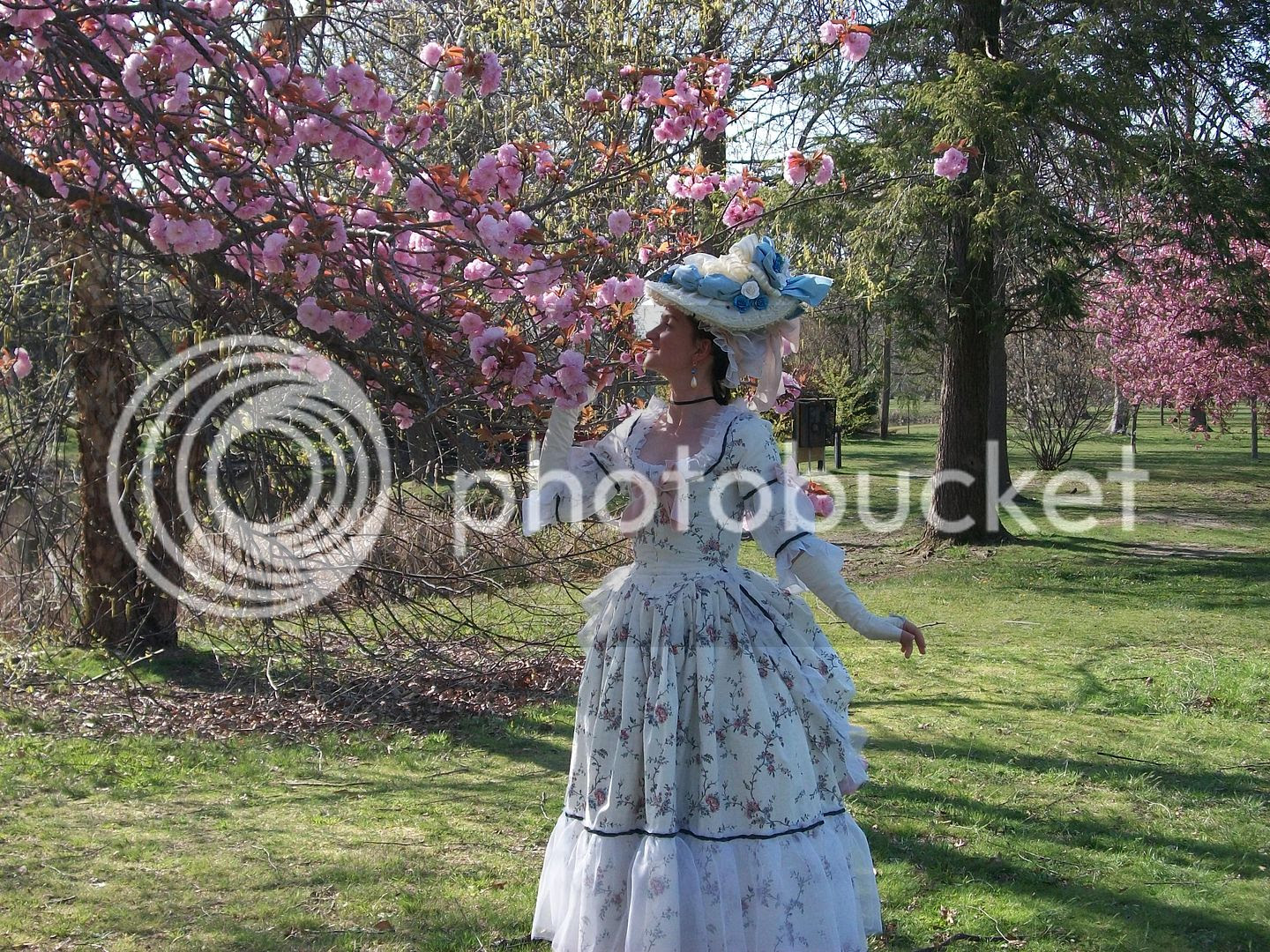