- August 23, 2014
Back from our Not-So-Grand Tour of New England! We drove up Monday and stayed outside of Boston for two nights, then down to Plymouth on Wednesday, Providence Thursday, and drove home Friday, stopping in Sleepy Hollow/Tarrytown on the way. The only time I'd been up to New England was a school trip to Boston about ten years ago, so I was excited to go back. So much Historical Stuff (I planned a lot of our itinerary; can you tell?), and the scenery is just beautiful. My mom agreed with me, Lil' Sis...maybe not so much.

Don't worry, this isn't where I inflict all my touristy pictures on you, just my What I Wore. Since I spent most of the previous week working on some new dresses, I thought I might as well get snaps of them too.

First off is a cheater. I didn't make it, it's vintage. (I had one more dress in the works, but ended up putting it aside in favor of Katherine Parr. Right, that's a thing I'm doing...) It's just a cheap little house dress, but it's very comfy, and is synthetic so doesn't wrinkle. A good thing for what ended up as eight hours in the car! I keep meaning to take a pattern from it. Uh...someday?

Tuesday was Boston day. We mainly did the Freedom Trail, which is all the main historic touristy stuff. Paul Revere's house, the Old North Church, etc. Took my What I Wore photo of the day at the Mather tomb. Not sure Cotton Mather would have really appreciated that, but...Made the skirt, did not make the blouse (because ew, who wants to make modern blouses?). The sneakers are not the best look with it, but I knew that'd be the day with the most walking, so practical shoes it was. And I made the waist slightly too large (don't you know how to measure yet??), so it travels down and doesn't maybe look as nice as it could. A waistband tuck is in order before I wear it again! And yes, that is an umbrella print. Cotton poplin print, made from the skirt of this Butterick pattern. 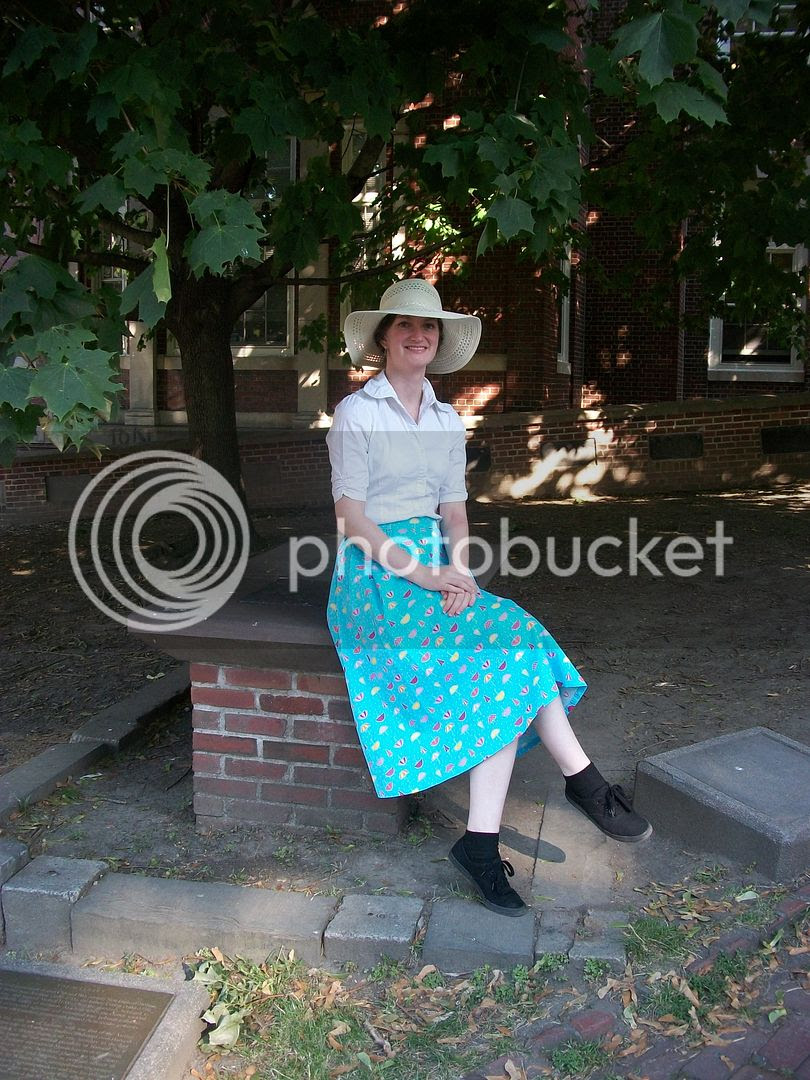 Also, yes, Quite A Hat. Sun hats are my friends, and I will defend them forever, however stupid I look in them.

Wednesday was Plymouth. We saw We saw The Rock The Pilgrims Landed On (it was a rock. I am not sold on it), did a tour of the harbor on a paddlewheel boat, saw Mayflower II, went to Plimouth Plantation, went on a ghost tour, and then drove to our Providence hotel at ten o'clock at night.

Here's your What I Wore of the day, taken on the pier while waiting for our harbor tour. It's made from a linen/rayon blend, from B5032 (OOP now). The sleeves are stolen from some other Butterick pattern I had laying around, and bastardized to fit in that armscye. Also featured with my new favorite scarf. I had it stashed away in a drawer but never wore it before (part of the things I got from a great-aunt a few years back), because, ew, yellow. But now I like it, despite how obnoxious it is. Maybe because of? I also like it because it's really made to put on your head (supposedly water-resistant, according to the tag. Not convinced, but did not have to test it out) - it's folded in half down the width, and stitched together except for a section in the middle. Perfect for preserving your hair out in the harbor! Attempting to, anyway. 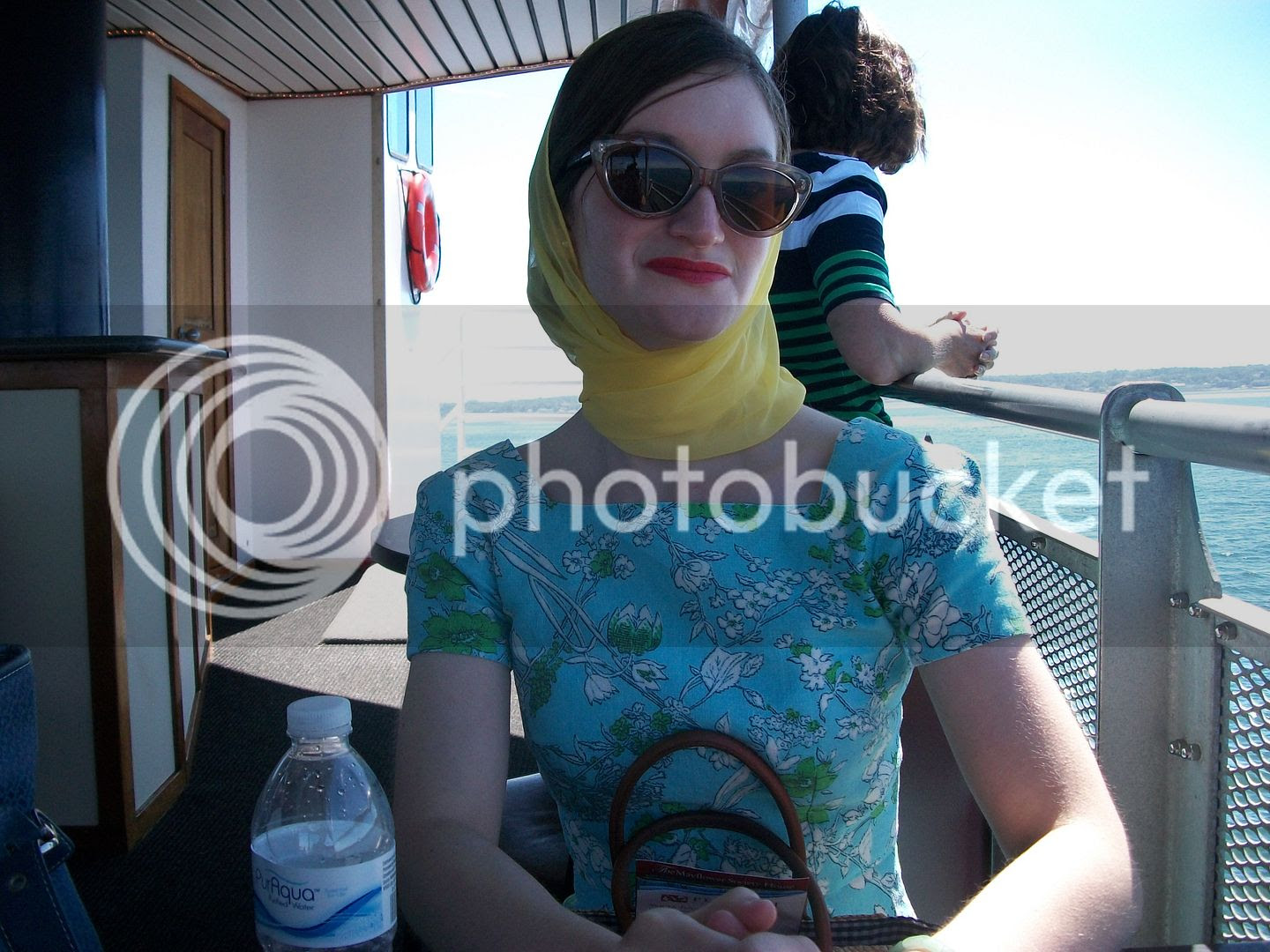 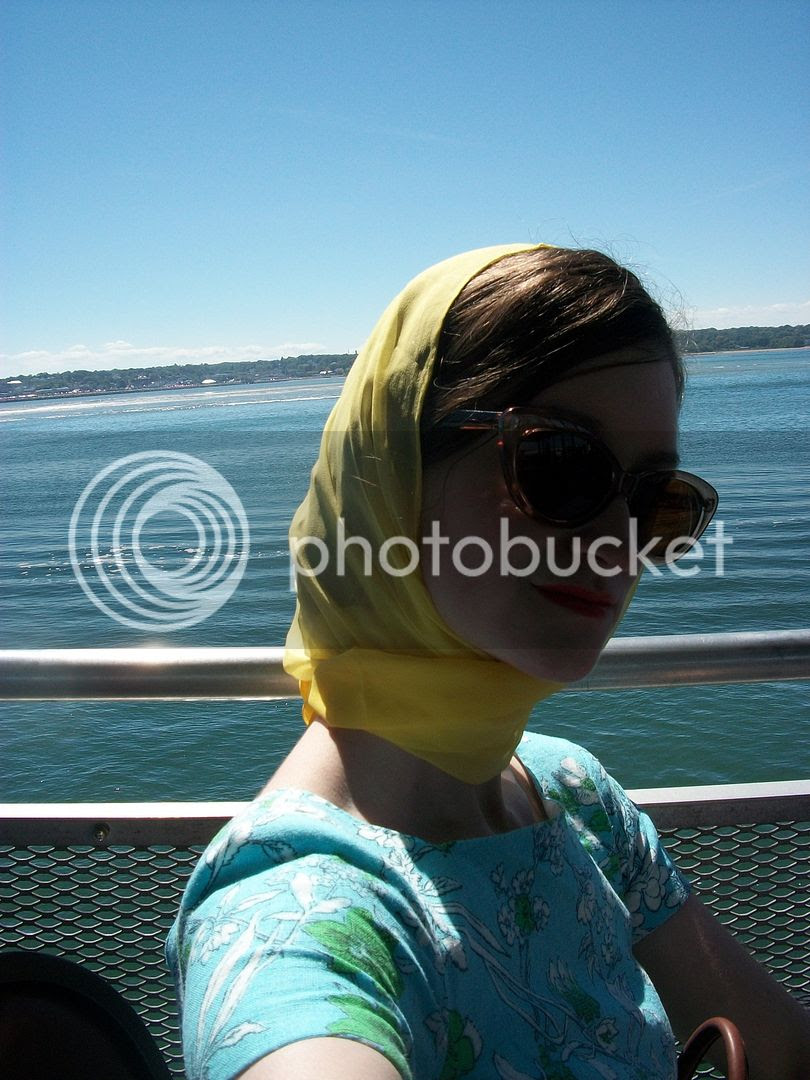 Thursday was our day in Providence, which is the most adorable little city I've ever seen. It's so tiny! We spent most of the day on the east side, in the historical section. We took a Benefit Street tour (loved Benefit Street), walked around downtown, and took a gondola ride in the evening. Took my What I Wore pic outside of 135 Benefit Street, which is the Shunned House in one of Lovecraft's stories, for any of my fellow Lovecraft aficionados out there. 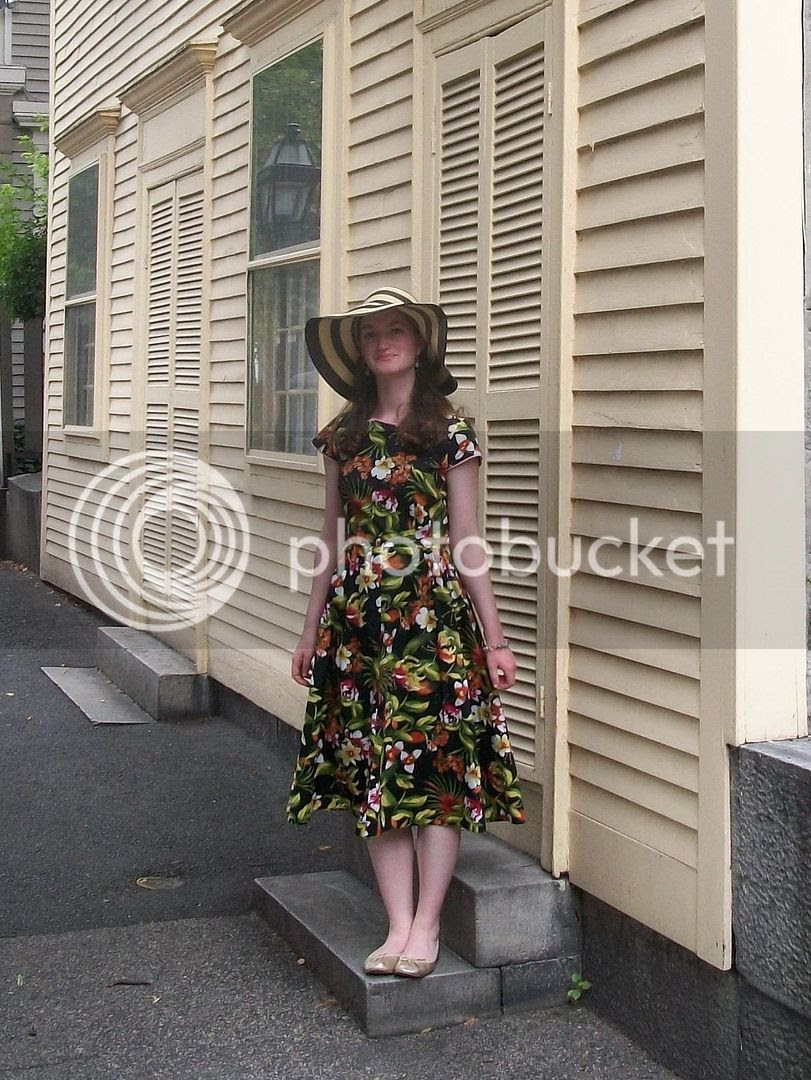 This dress is of cotton shirting, made from the skirt of the skirt of the aforementioned B6582, and the top of some OOP dress pattern I don't feel like digging up at the moment, but obviously very basic.

Friday was another travel day that, again, took much more time than it ought. Traffic! We stopped in Sleepy Hollow Cemetery/Tarrytown, to see my great-grandparents' graves and have a meal, so you get my What I Wore picture in the cemetery by the old church. 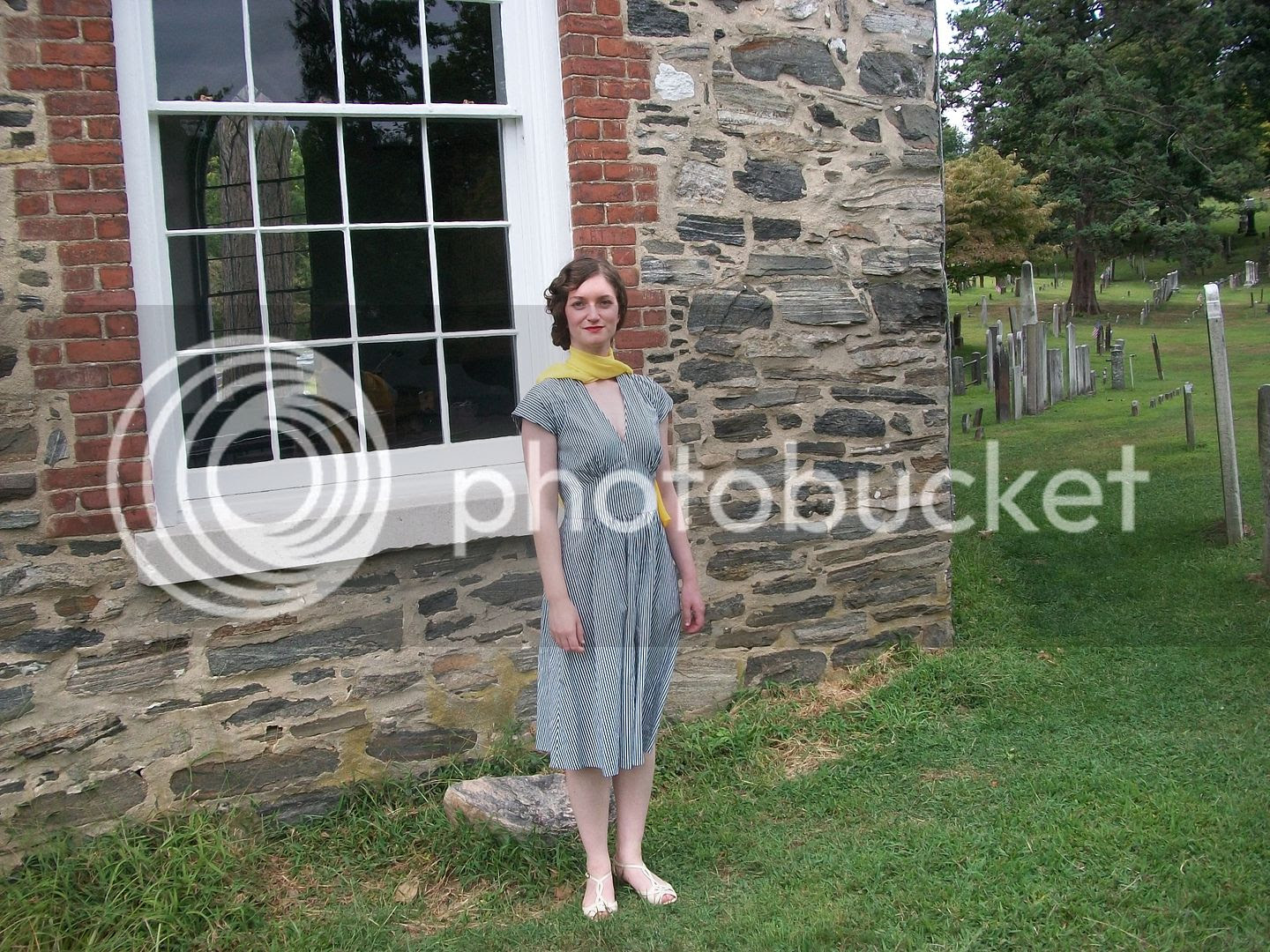 This one's an old dress that I took apart and sized down a bit, because when I made it three years ago it was too big. Apparently it's still too big in the waist (oops), but at least that made it very comfy for travelling? It's B5209, made of plain old cotton that I remember getting when the Rag Shop closed. Gives you an idea of how old it is...