- March 25, 2011
I decided I ought to post something here, no? Have decided to post the past year and a half's worth of costume pieces here, starting with the Tudor gown I made for the Renaissance Faire in 2009.

I based it on this portrait of Anne Bolyen, inasmuch as it's a black gown, worn with a French hood decorated with pearls. You really can't see a whole lot of detail! (And the detail you can see, I still haven't actually put on my dress. Of course.) 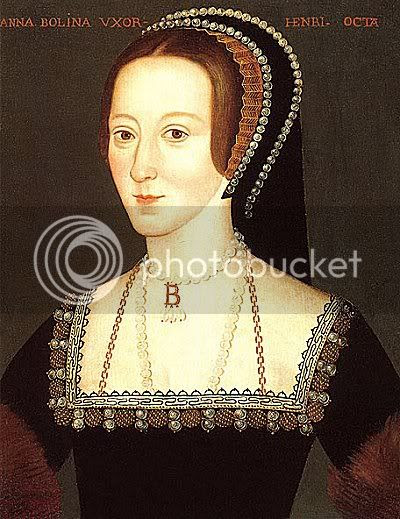 For the construction of the dress, I stared at the few 1520s-30s images I have (even though, yes, I am aware the inspirational portrait wasn't painted in Anne's lifetime anyway), and tried to remember theories I've read that other people have come up with. I at least want plausibility, if not confirmation! 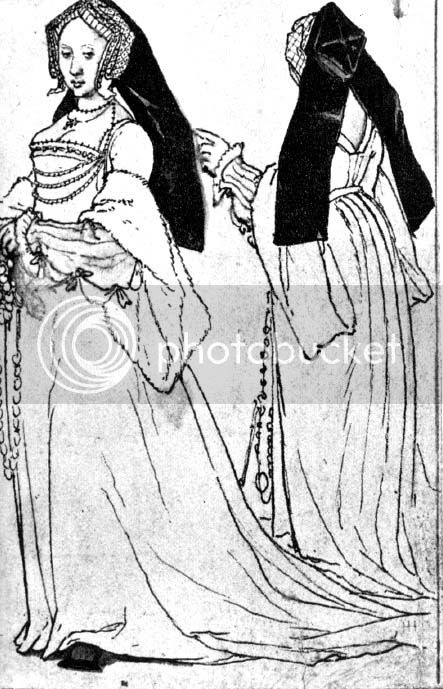 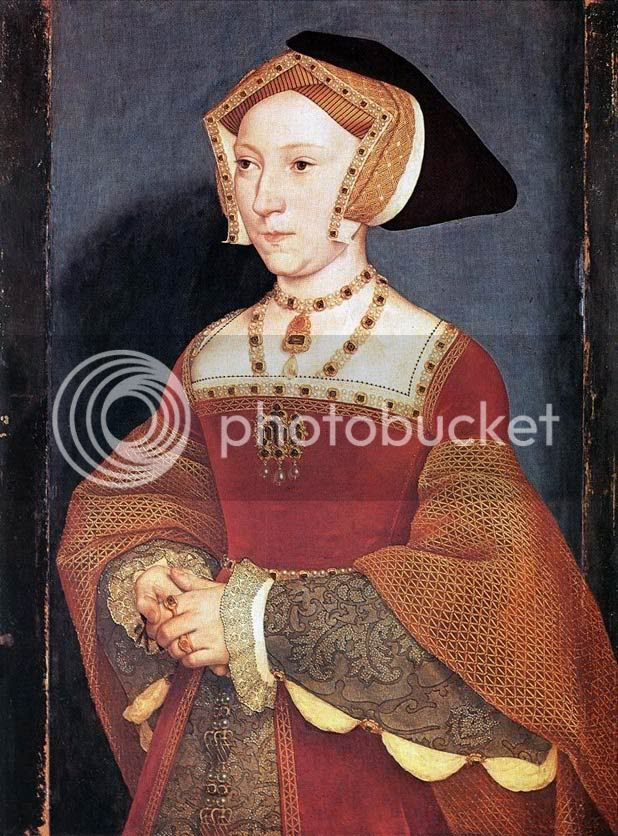 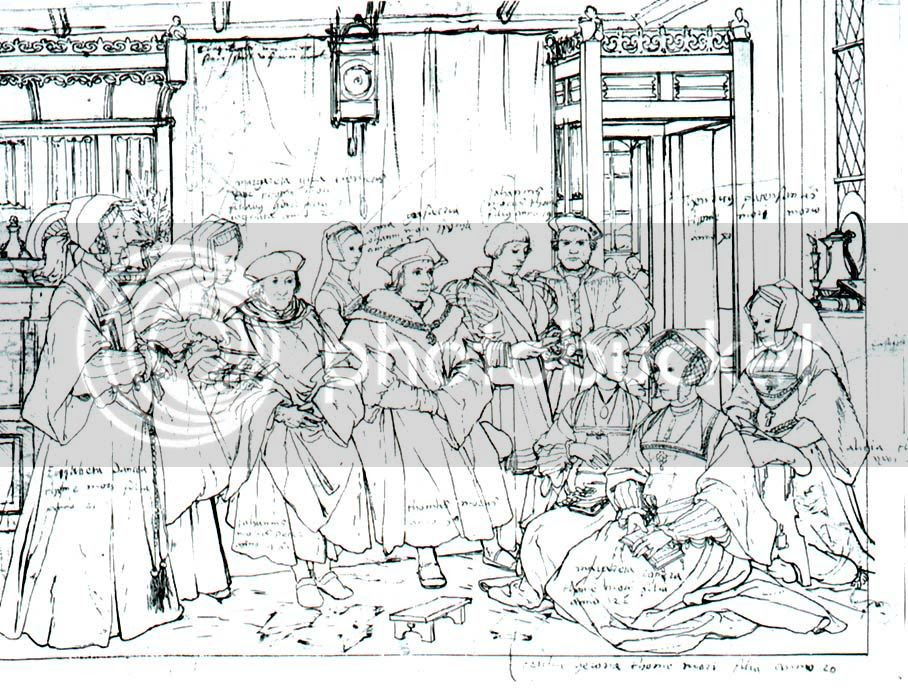 In the first image, there doesn't appear to be a back fastening on the gown; in the portrait of Jane Seymour, you can just see what appear to be the heads of pins, which would make sense for holding a stomacher in place that is covering the fastening, and in the last, the pregnant women in the picture are wearing gowns that lace open over their bellies. Since maternity wear was not usually specially made, it is possible we are seeing the gown without its usual stomacher, which usually hides the lacing.

I decided that wasn't too far out of an assumption for the construction of my own costume! I also decided to cord the bodice of the kirtle (underdress) instead of wearing my effigy stays, which is another leap, but again, not too far out of the realm of possibility, I hope! I wanted the softer look of the earlier Henry VIII period, and my figure only needs a minimum of support anyway, so cording it was. Only down side of this: if I want a new kirtle, I have to start all over again. (And if I wear this again, I do want a new kirtle; I made this one from cheapo poly taffeta, and it displeases me now!)

For the French hood, I am quite indebted to Mode Historique's research on French hoods; some people make their French hoods all in one piece, but I like her idea that it was constructed of multiple pieces. And it was all pinned together -- and to my head! -- so I had no fear whatsover of it escaping! 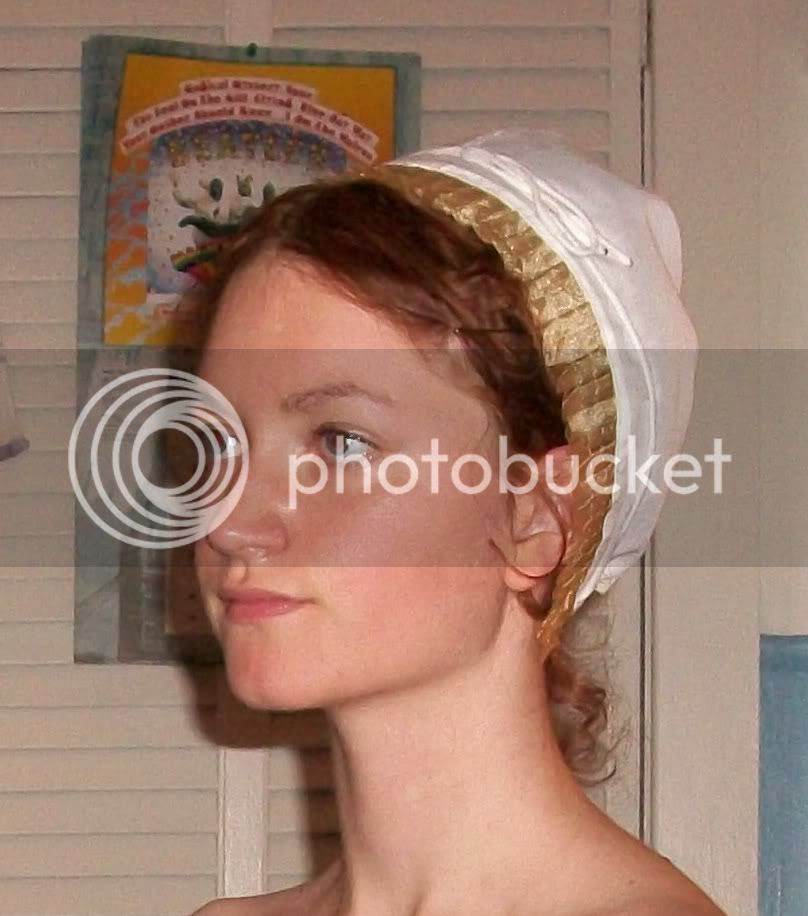 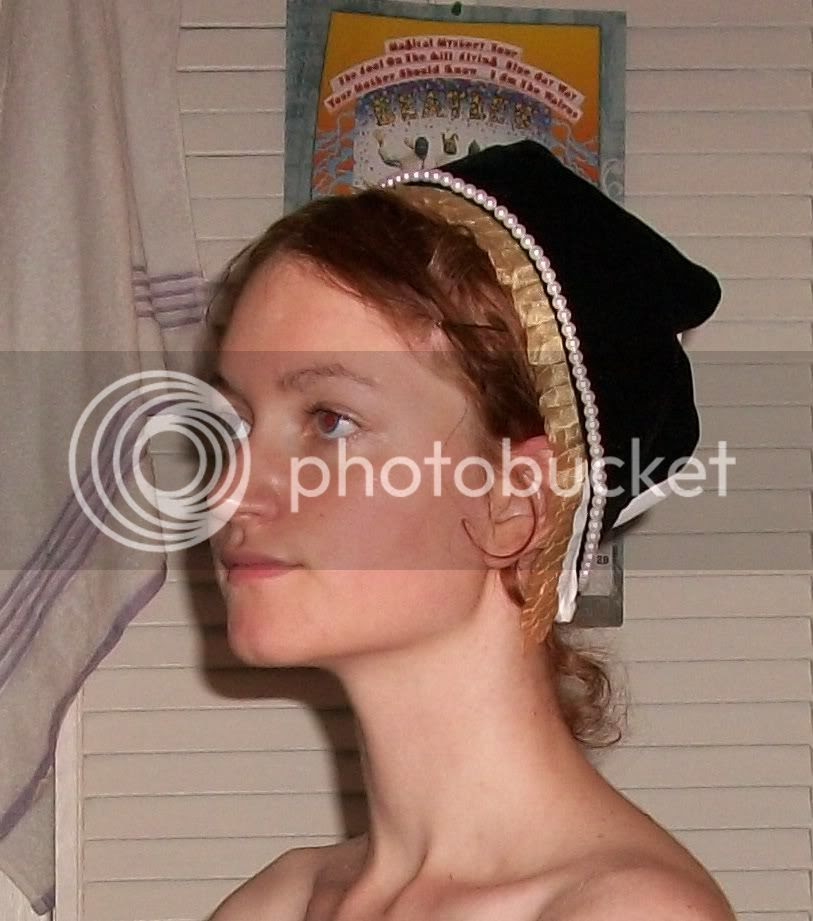 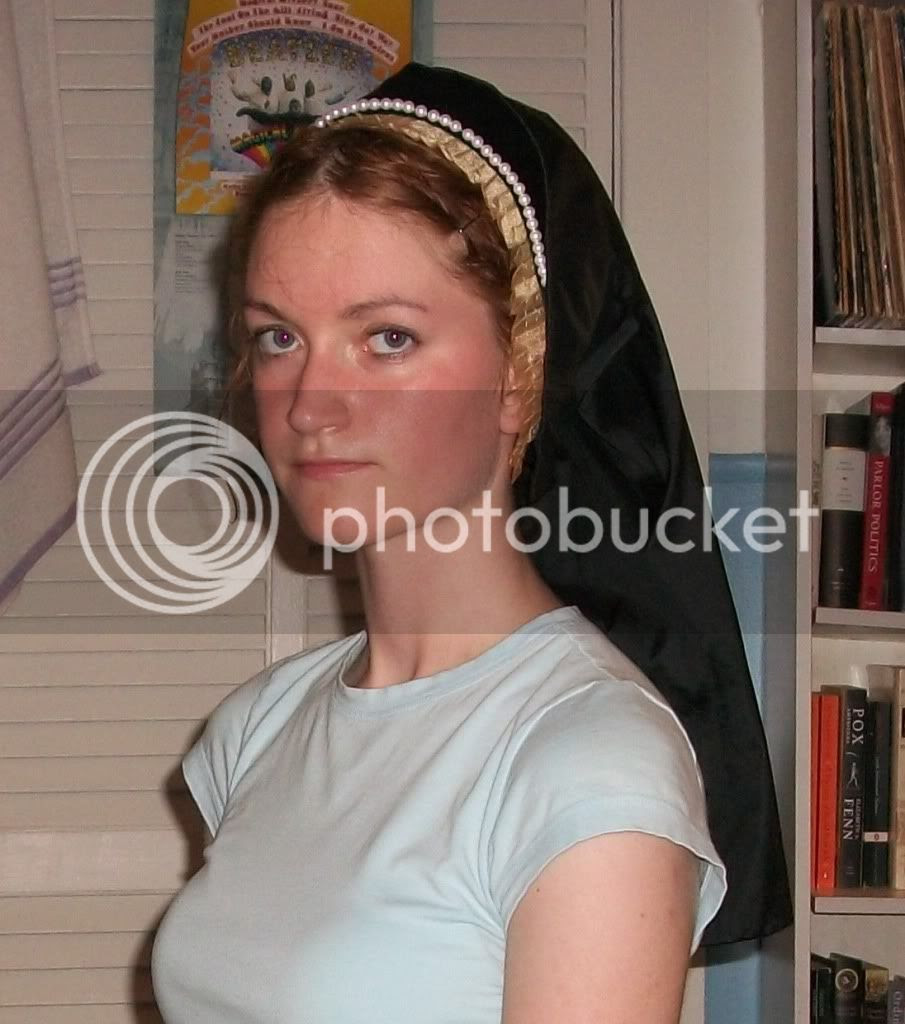 The kirtle and under-sleeves are made of poly ivory taffeta (ew), the gown is of black cotton velveteen, and the sleeves are fake fur (the closest to the color in the portrait I could find at my local Joann's...which wasn't very close). 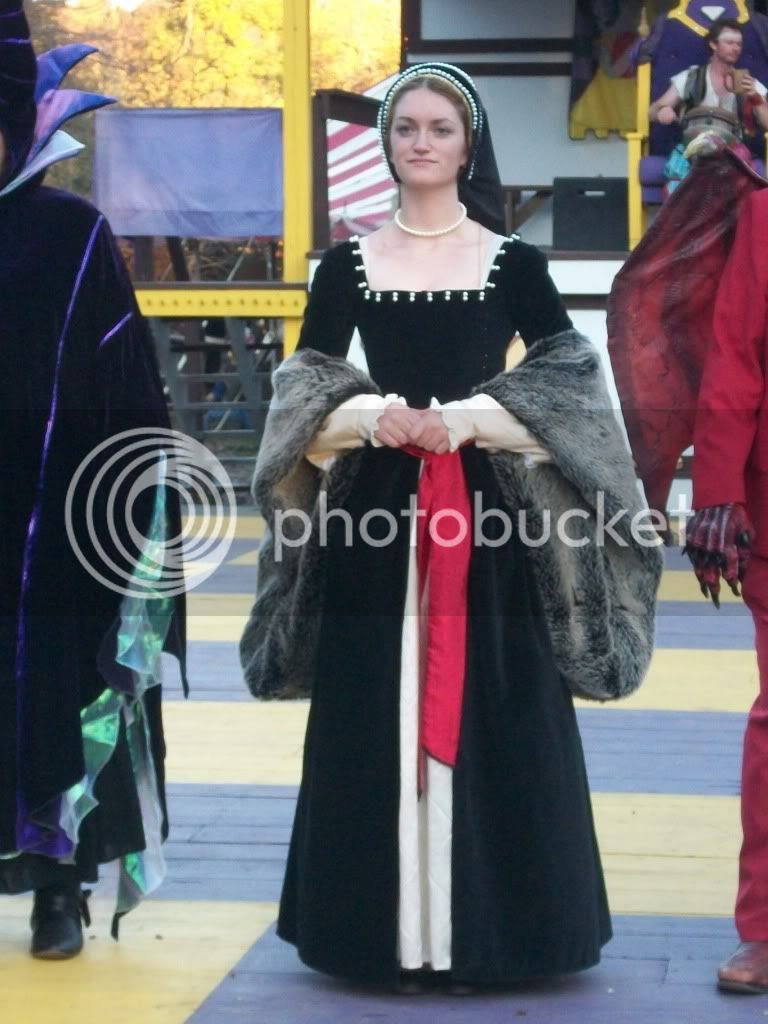 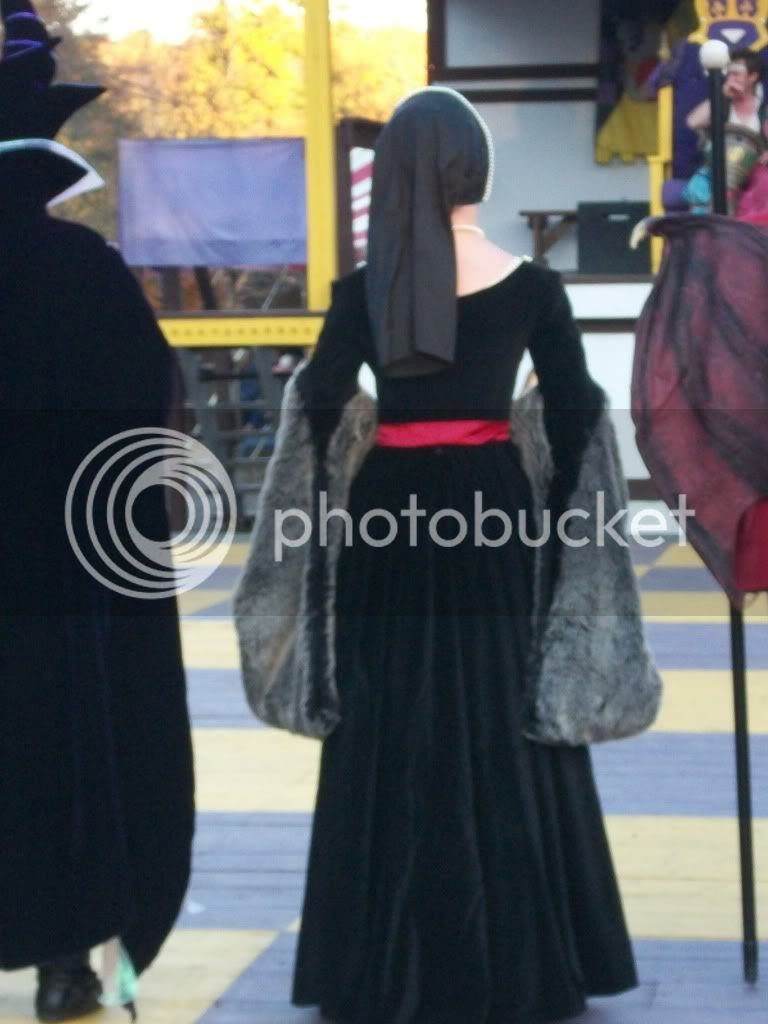 Typically (for me), I ran out of time on the actual embellishment of the gown to, you know, make it resemble the portrait, but I'm still pleased with it!
16thc: black tudor