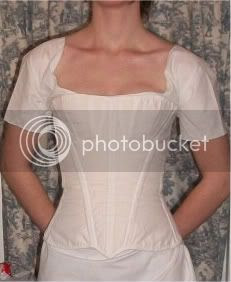 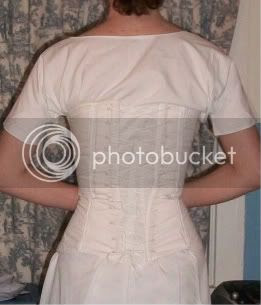 The corset is made from the pattern for the1844 corset in Corsets and Crinolines, of a layer of cotton canvas covered in plain white cotton. It's mostly corded; there are two rows of cotton cording on each seam. The front has two cable ties, and each back edge is boned with cable ties, just so the lacing isn't all wonky. The original corset in the book has stiff boning on each seam, and I'm honestly not sure why I decided to use mostly cording instead...I started this so long ago, I really forget! I think maybe I didn't have enough cable ties at the time...? That's the reason you can see such wrinkles, the cording's not stiff enough to smooth them out.

On to the petticoats...First the corded one. It's made of ivory linen (because I had some laying around at the time), and corded with 25 rowns of hemp.

Then the flounced petticoat:

And the top petticoat! Both it and the flounced one are made from plain white cotton muslin. It's all worn with an 18th-century style shift, but having the right chemise is at the absolute bottom of my list of Things I Care About When Making A Costume! As long as the neckline's fine, I don't really care.