- December 13, 2016
I didn't need a new ballgown. (Is a ballgown ever something one really needs?) The Rainbow Trout dress is alright, but I really wanted something more Christmas-themed, and less...sleeve-y. I love my friends in big-sleeved ridiculousness; I don't love it on me quite as much. So I wickedly bought some yardage of silk taffeta in one of my very favorite colors, and proceeded to make a c1838-40 ballgown! 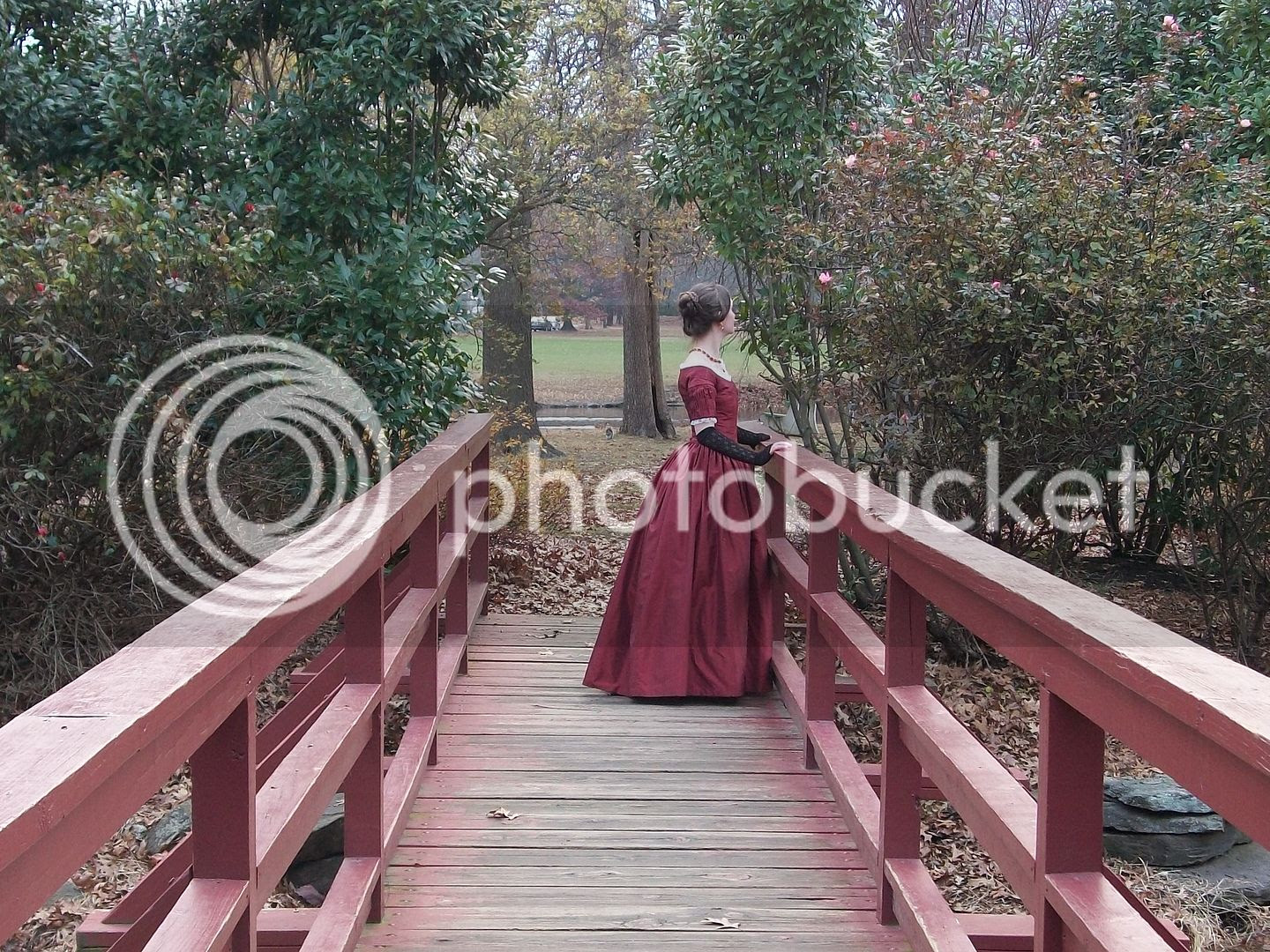 As much fun as I had at the ball, dim lighting doesn't make for very good costume documentation for one's blog, so I trotted it out again today to take pictures that are less grainy (and freeze my bum off in the park).


I didn't base my design on any one particular dress, but I did take a lot of inspiration from this Pinterest board; there's a very respectable showing of styles from right around the turn of the decade on there. I used the sleeve from this dress (except with knife pleats rather than smocking), and the type of bodice trim from this and this. 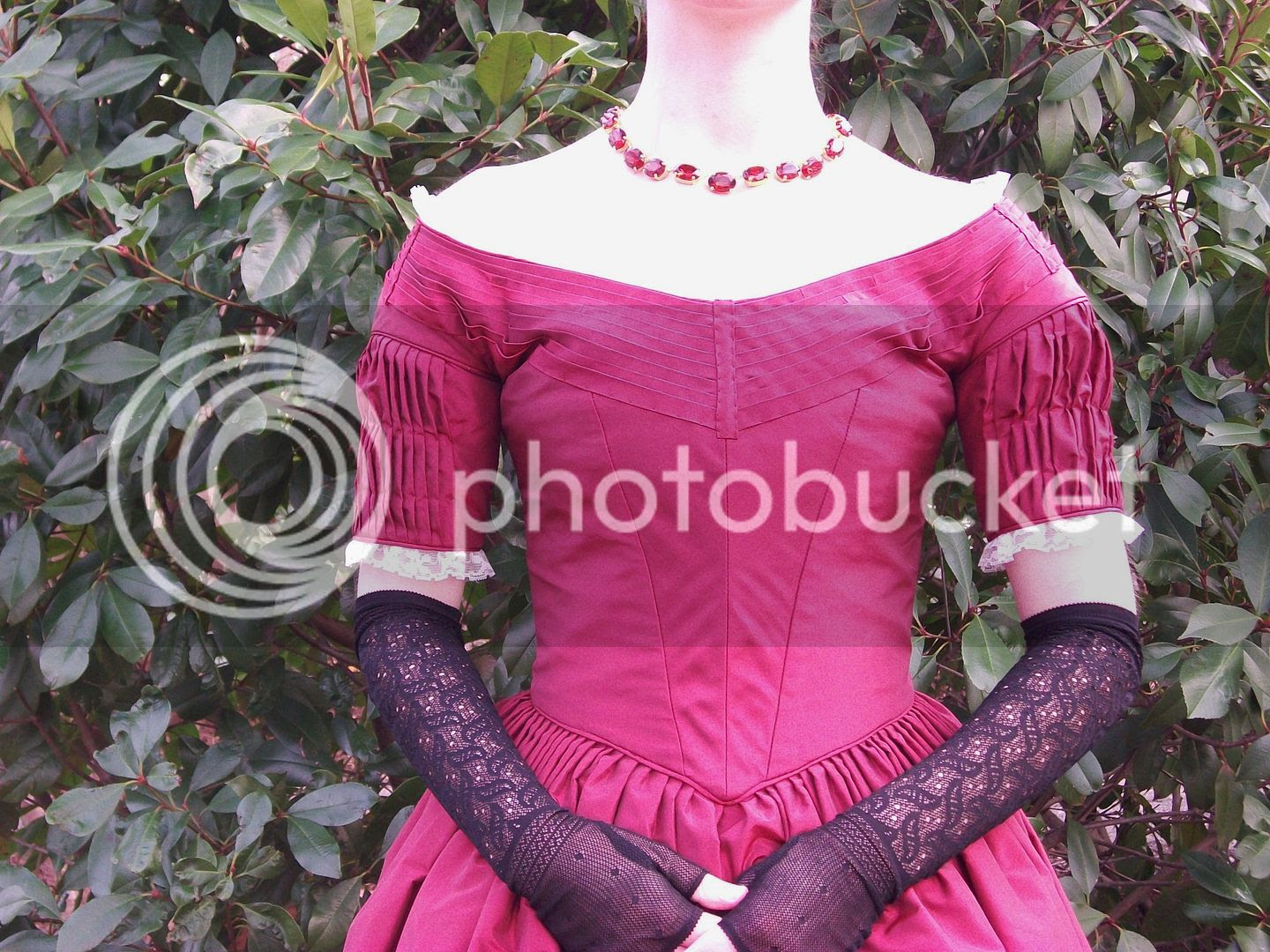 I decided to offset my eyelets for spiral lacing rather than cross; you do still see it around 1840 though it's definitely going out of fashion. Plus I can get into a back spiral-laced dress myself if need be! Very important for getting pictures by myself. ;)
The dress and trim are of blood-red silk taffeta from Silk Baron (you can pry my red dresses from my cold dead hands...and you still do see deep colors in early Victorian fashion plates!). The bodice and sleeves are lined with linen, and the hem has about a 12" white cotton muslin facing. (I trod on said facing at the end of the ball and ripped it right off. Had to re-sew about a third of it before getting these pics. Ooops?) All the basic seams and the piping are machine sewn - I would have liked to sew it all by hand but I always find myself in a bit of a time crunch for early Victorian! 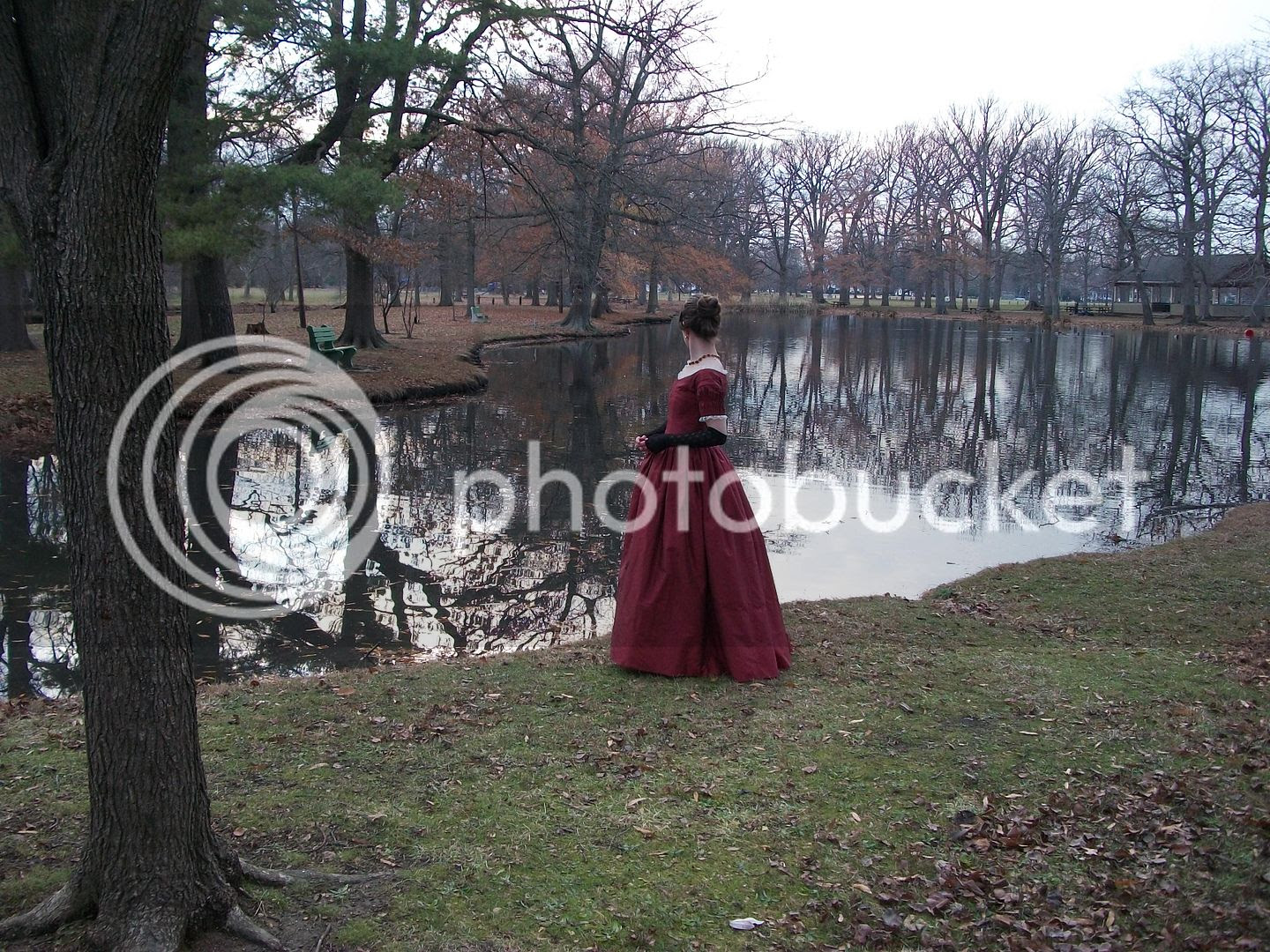 I boned each seam of the bodice with plastic whalebone, which is relatively new to me. This is the first finished garment I've used it in, and I have no complaints. I've been happy with cable ties in the past, but this will probably replace it in a lot of contexts. There are some times when cable ties are not fine enough for what I need (my natural form corset is a good example of this), and plastic whalebone will fill in nicely.
I used my bodice pattern from the 1838 cream poplin, but did a bit of refitting, along with some lengthening of the bodice in front and making a more obvious point. I cut the silk fronts on the bias, because a lot of dresses of the time seem to have done that (because they liked wrinkly fronts, I suppose? I still have reservations about this), but compromised by cutting the linen linings on the straight-but-across-the-stretchy-grain. I wasn't about to cut linen on the bias...I've made that mistake enough times, thank you very much! Seems to have mostly worked. I do get some front bodice wrinkles but they look worse in pictures than in person, I think. 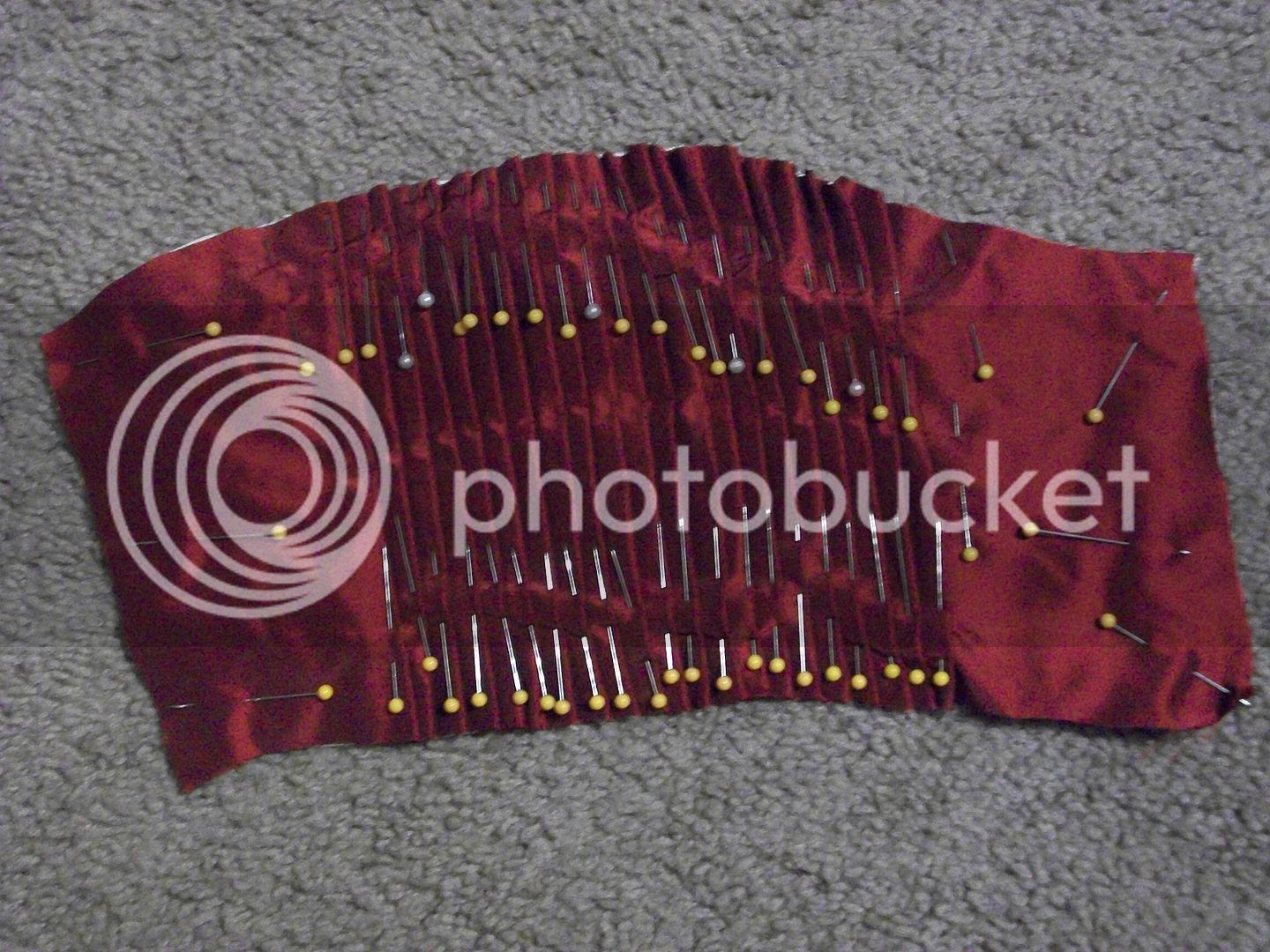 I cut the sleeve out of linen and then pleated the silk over it til I thought there were enough pleats! They don't exactly match but that's ok right??
I briefly considered doing pleated cuffs as well, like one of my primary inspirations, but decided that sounded too complicated (I think the ball was two days off at this point) and that piping would do very well. I did stitch some antique lace to twill tape and basted that into the cuff (and later did the same for the neckline), to make it easily removable later, if I ever want to do so. 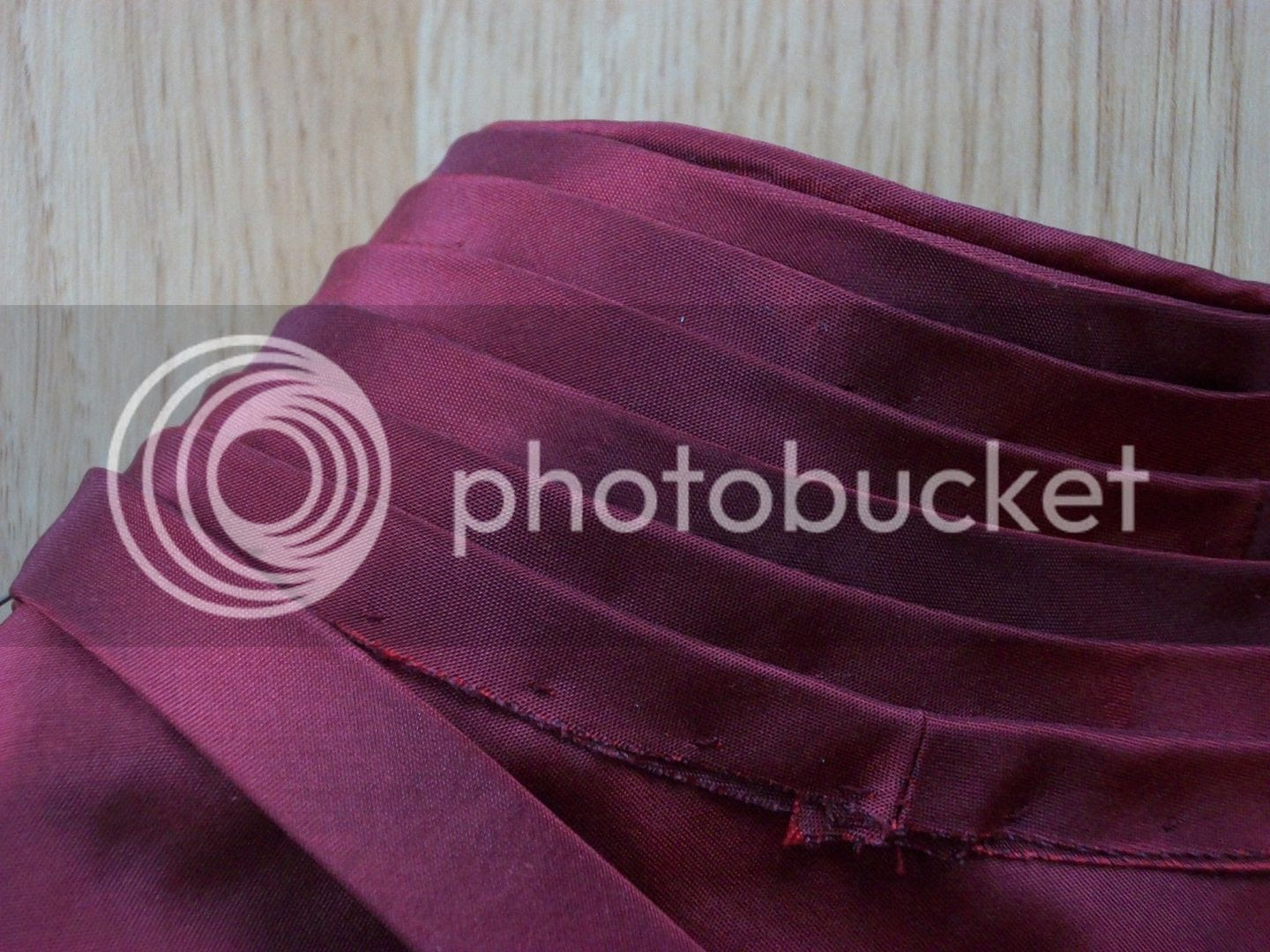 The neckline trim is made from (endless) bias strips, folded in half and tacked on just under where the next strip would go, to hide it. You can see the stitching on the last strip to go on, but, whatever. They're very small stitches! 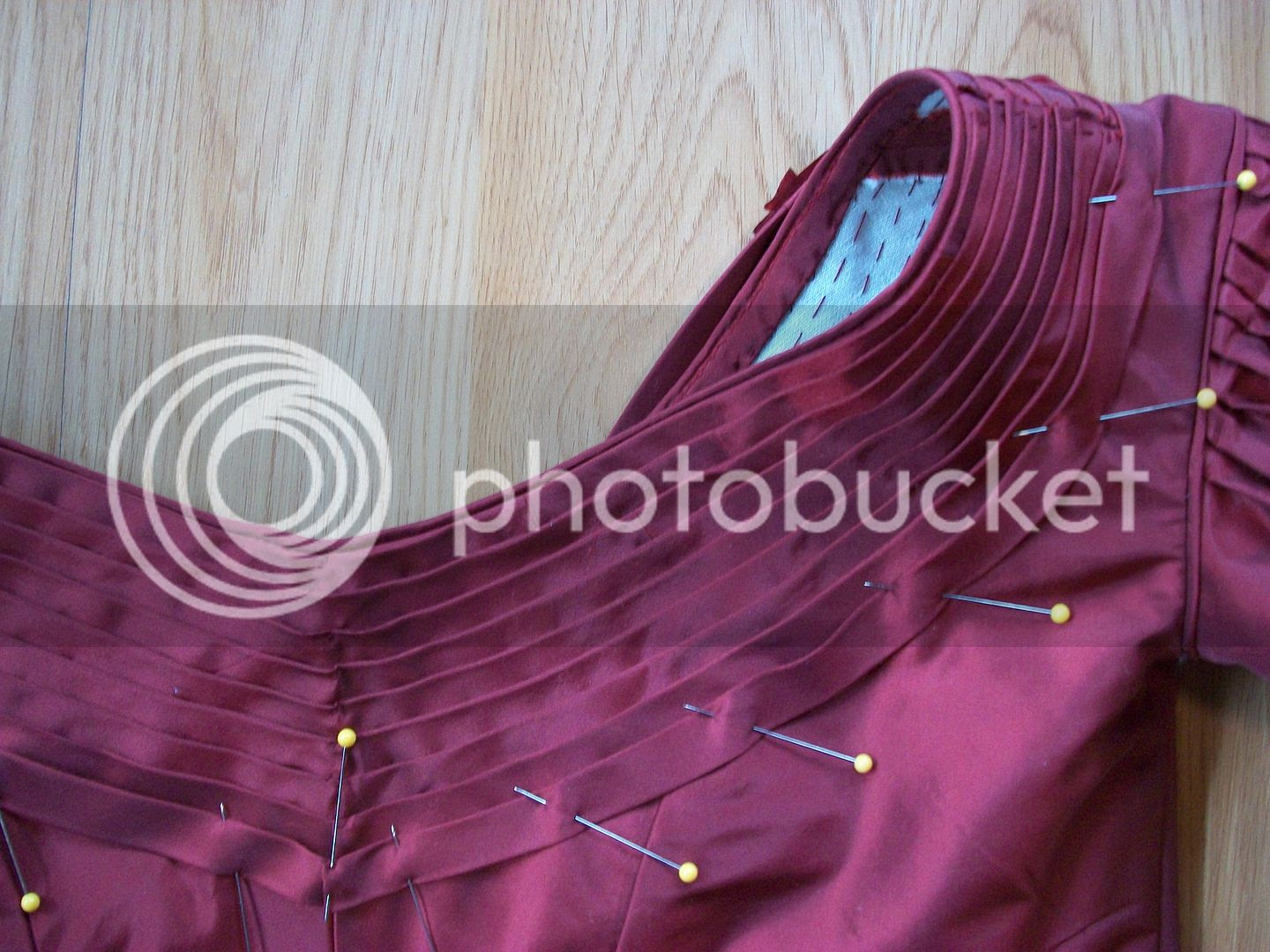 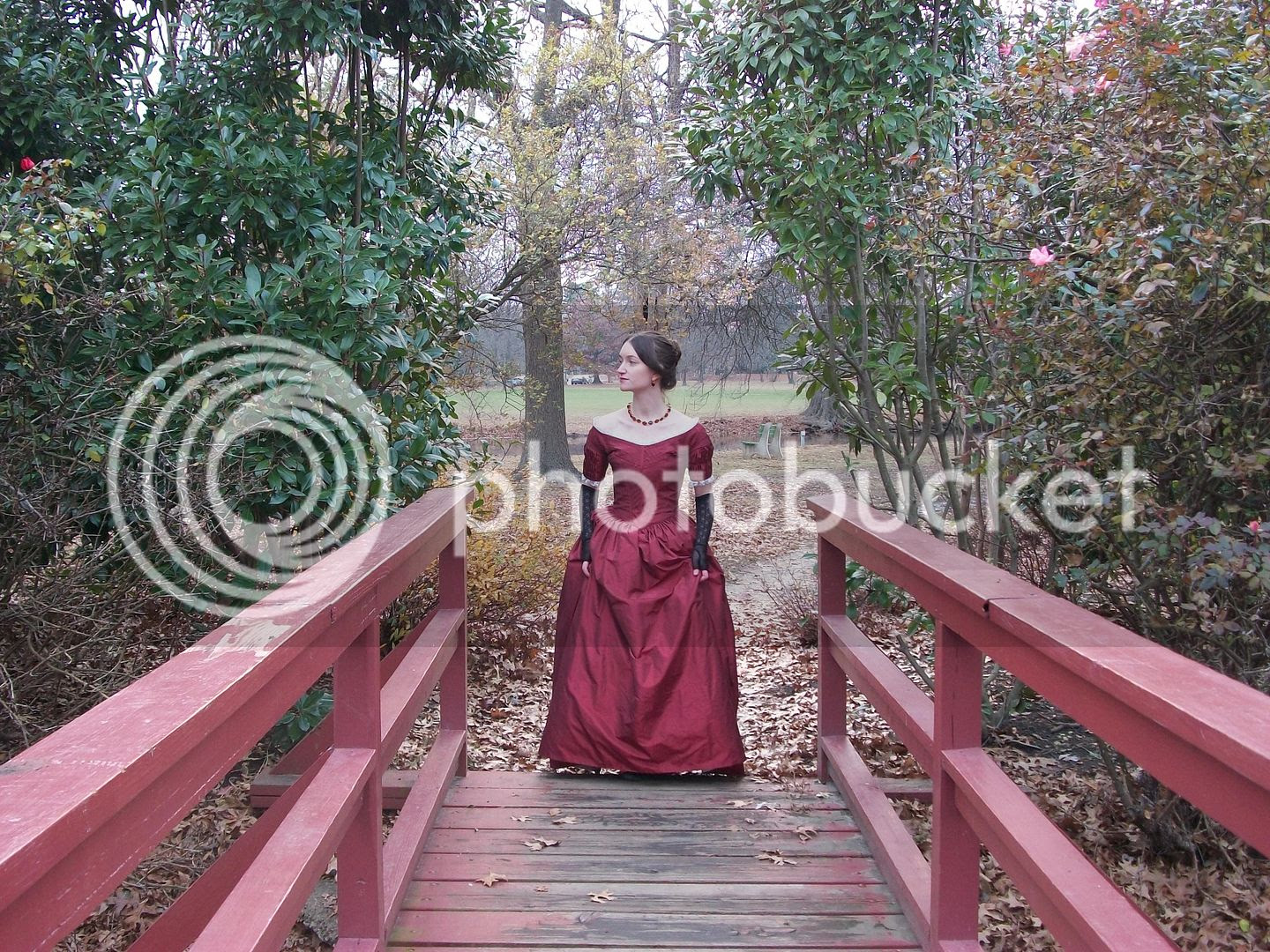 I'm really very pleased with this dress; I ought to pad out the upper bust with batting so there's less crumpling (because of the dropped armscye), but other than that I have no major fitting complaints. Plus this style of relatively simple dress, with a few meticulous but not obvious details, is exactly my romantic ideal of what a ballgown should be! ;) 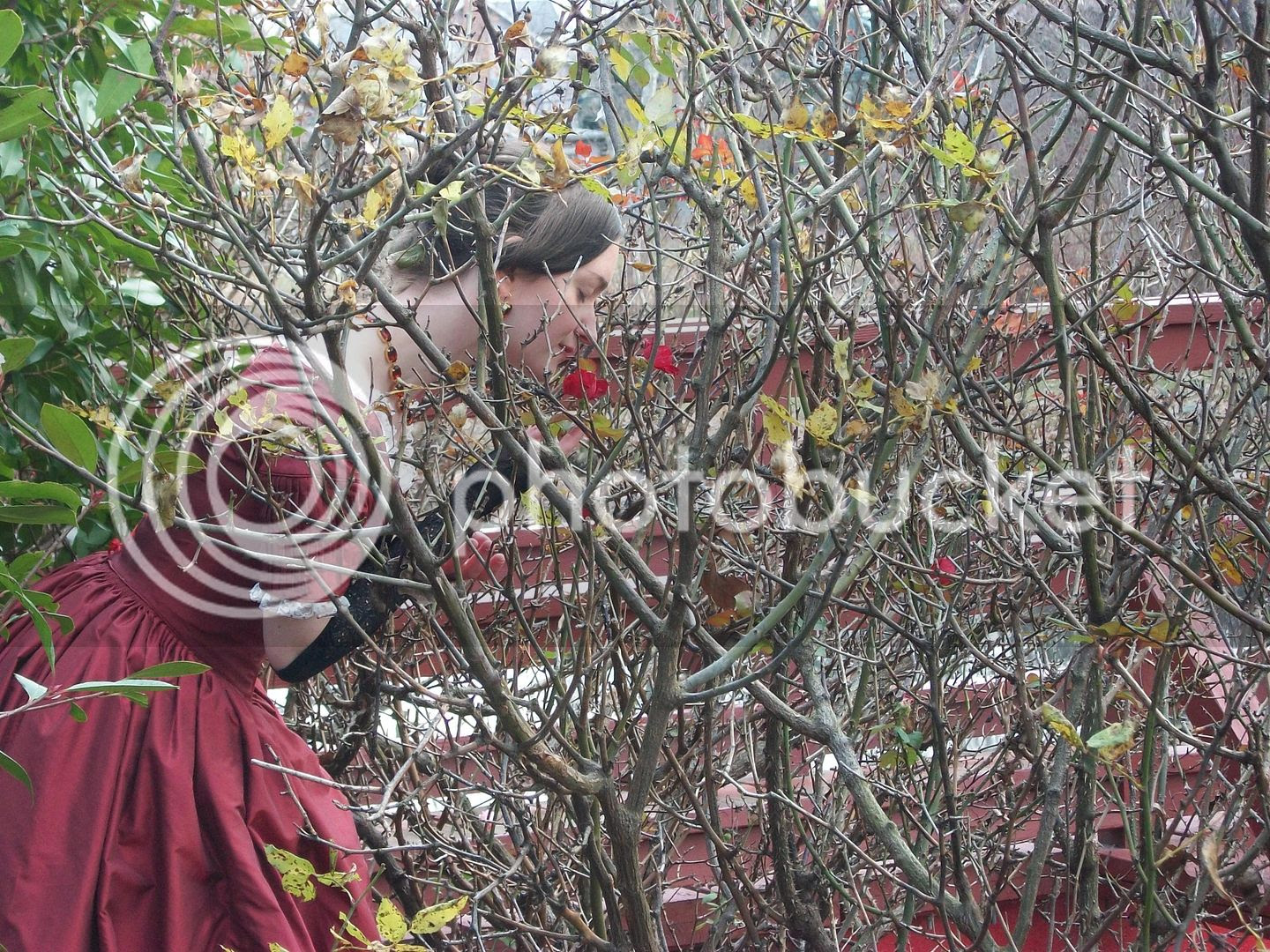 And a few less-clear shots from the Friday night ball (but with fancier hair!)... 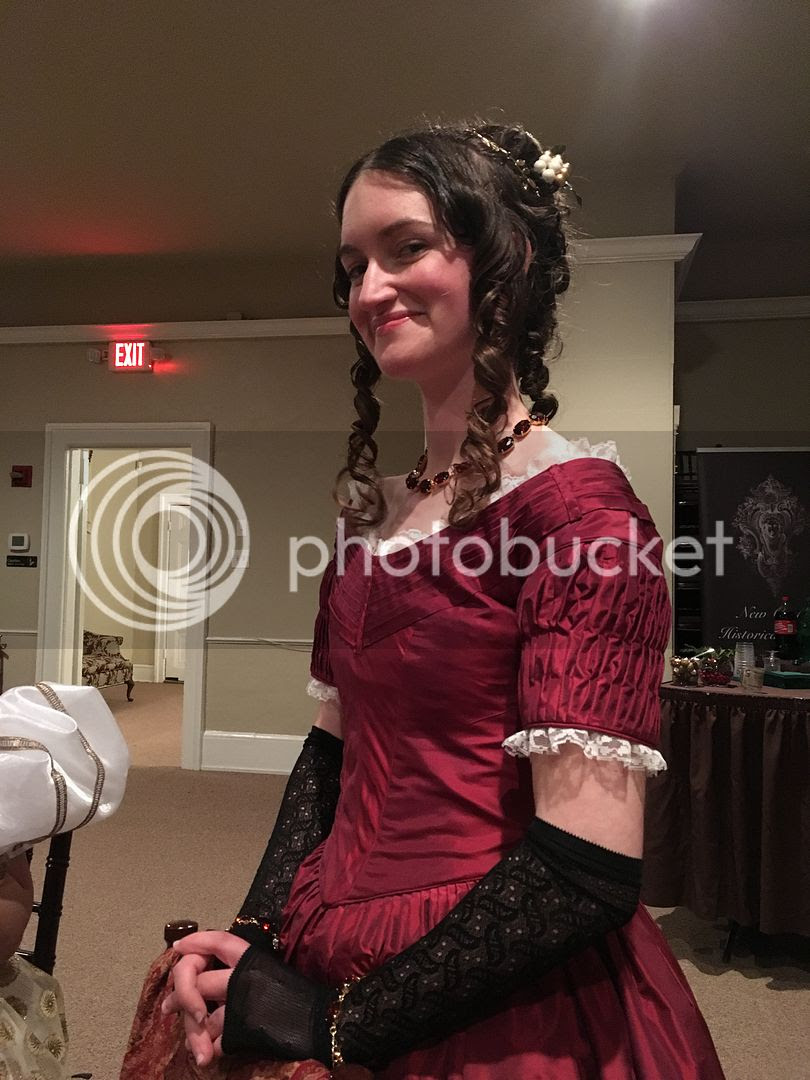 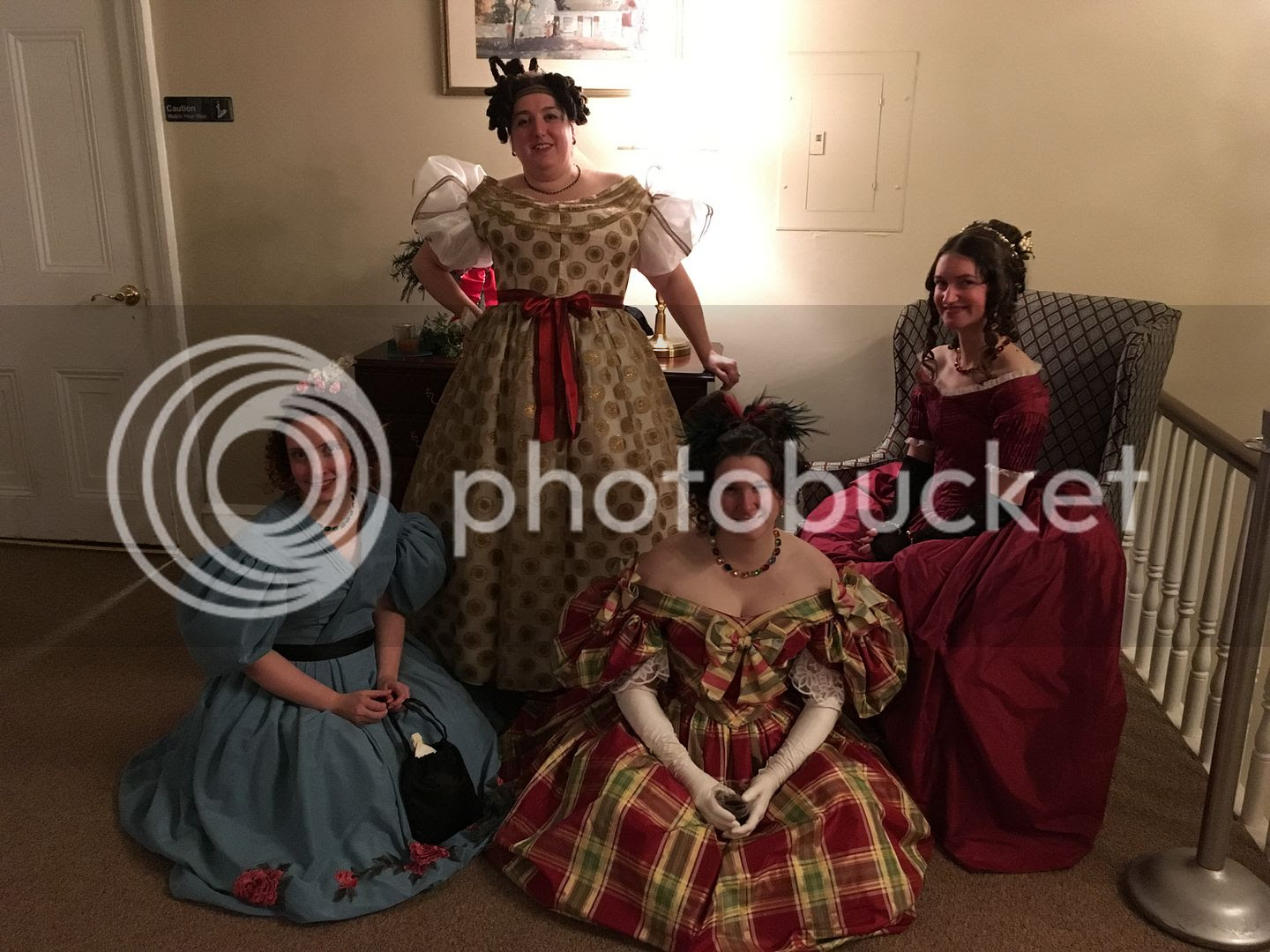 Next up will be a Victorian ice-skating outfit (1898, unless plans change), but as I don't need that til February it will probably be quiet around here til then.
19thc: christmas red ballgown