- December 12, 2016
New costume bits for New Castle will be in two parts; not so much because I made a lot of stuff, but because I couldn't get detail shots of the ballgown from Friday night (the dim lighting at balls is not great for my poor little camera, especially when the trim is all tone-on-tone)! So I plan on dressing up the dummy today or tomorrow, and do a writeup on the ballgown then.

With that said: new outerwear! Period winter clothes are some of my very favorite things to make and wear, so I decided to focus on a bonnet and mantle for Saturday tea and town-wanderings, and rewear my cream poplin dress from last year. Not a dress I'm thrilled with (still need to fix the sleeves), but perfectly acceptable, especially as a base for more fun things. 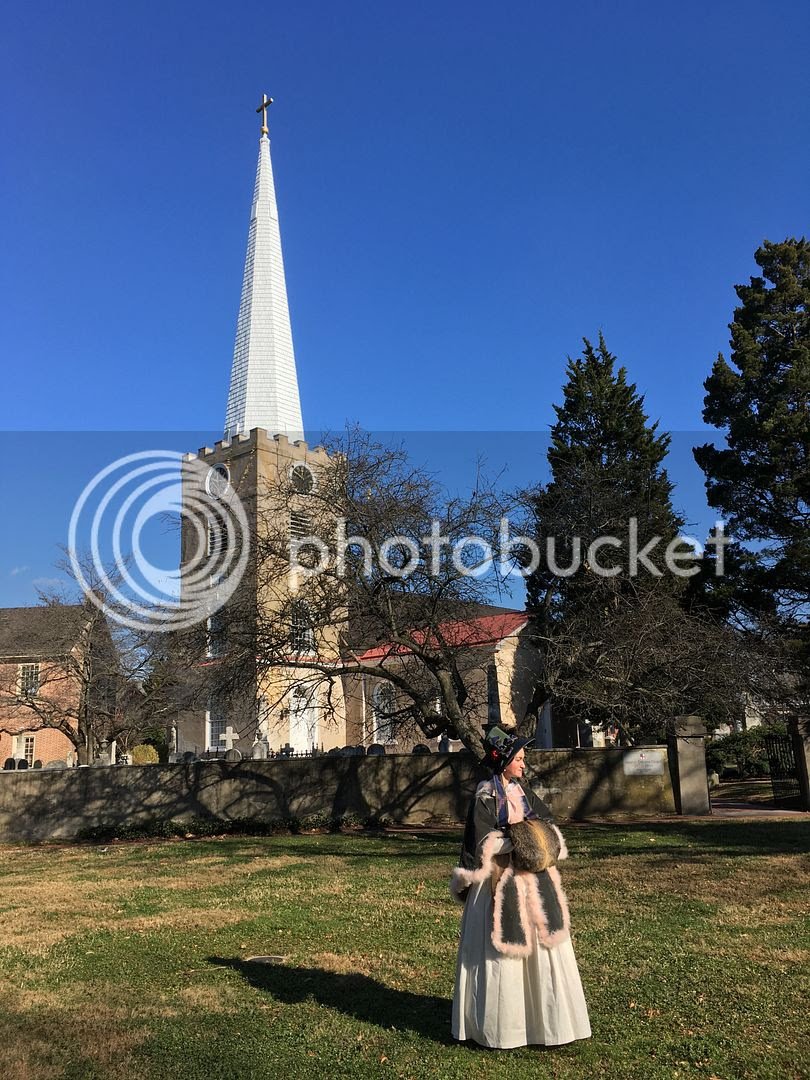 Those "more fun things" would be a new bonnet and mantle, precisely. Relatively simple but very necessary in cold weather! (And we did have cold weather this past weekend. I was thrilled. "You mean it's going to be a high in the 30s?! Hooray cold!")

And before I get any further into outfit talk: New Castle is a town in Delaware that has a Dickens Experience/Spirit of Christmas weekend every December, with a ball on Friday night and tea/Christmas-themed entertainment/open historic houses on Saturday. It's an absolutely lovely little downtown, chock-full of buildings that date from the late 18thc-mid-19thc (if they're not all originals they're very good repros!). Last year two friends and I found out about it too late to get tea tickets but went down Saturday anyway on a recon mission to see what it was like (which was documented in my seafoam-and-fuchsia 1860s dress post). We declared it charming, and that we ought to do the ball and stay over for the tea the next day. So we did! The mantle is partly based on one in Costume in Detail, and partly just inspired by the shapes of mantles in fashion plates throughout the 30s and 40s. And partly inspired by dealing with the 1.5 yards of velvet I had to work with!

The velvet was a lucky find on the clearance table at Joanns - all dead dino (possibly with some nylon thrown in, judging by the burn test), but very soft and without the unfortunate stiff backing you find on a lot of upholstery velvets. I'm a horrid fiber snob but I won't turn down a nice velvet when I find it for cheap! ;)

It's interlined with cotton flannel and lined in bronze silk shantung (because I don't care what they tell you, poly will very rarely keep you as warm as natural fibers!). The tie is pink silk taffeta, and the trim is marabou in what I like to call "pink champagne."
Since all the layers together are quite thick, I decided on the path of least resistance and used the same bronze silk from the lining to make miles of bias binding for the edge. I knew I wanted marabou on it so it'd be covered anyway. 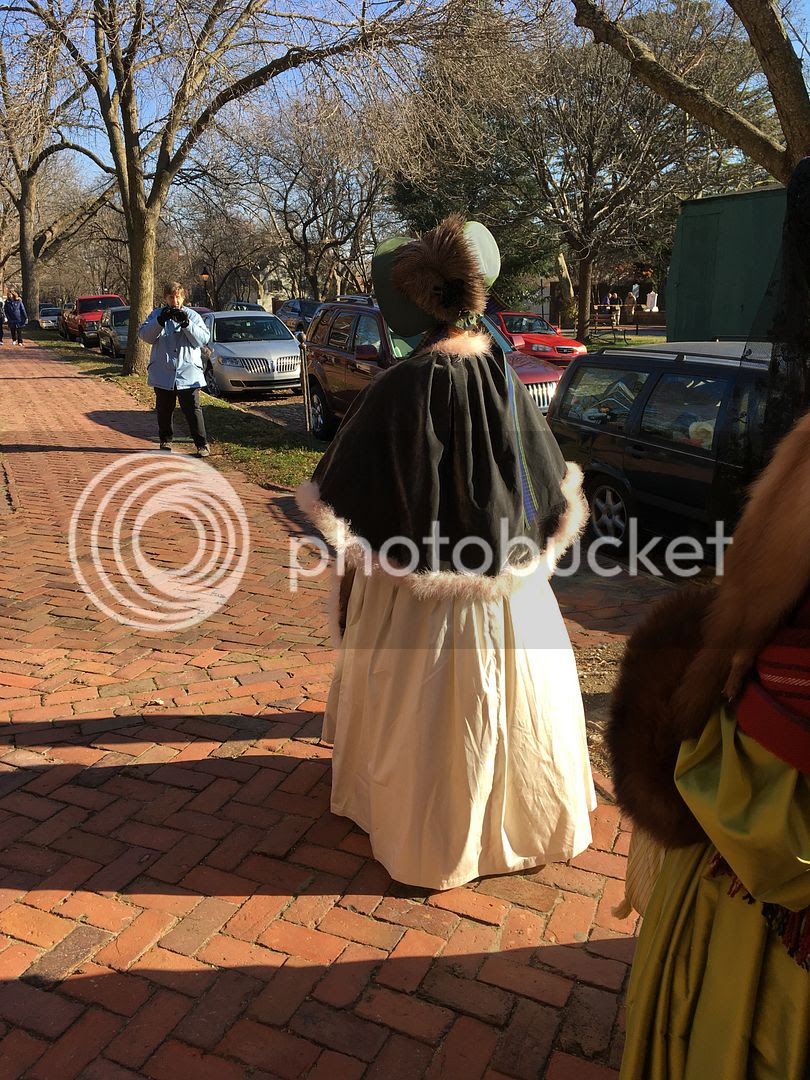 I sewed the shoulder seams on the machine, and the binding and (obviously) marabou are done by hand. And the verdict as to actual usefulness in cold? Quite satisfactory! We stayed til it started getting dark and the "real-feel" temp was in the upper 20s, and I had no complaints. Any colder and I'd probably want a muffler to keep the cold off my neck, but that's about it.

And now for the bonnet! 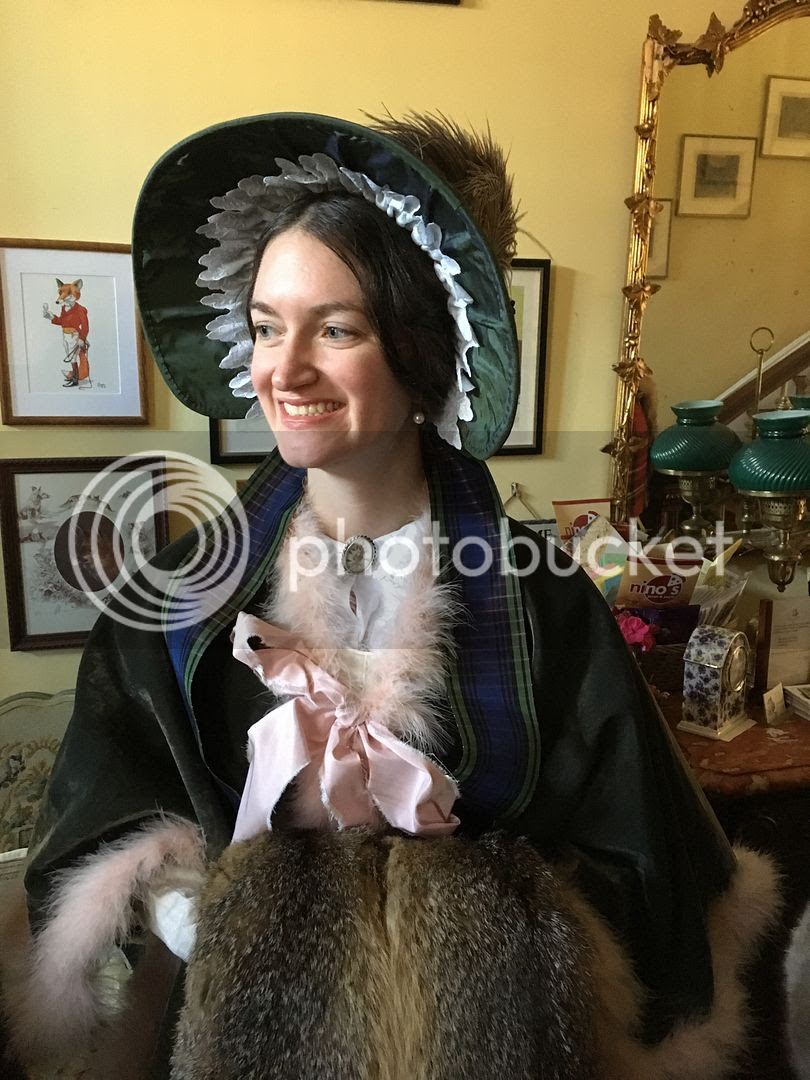 It's a buckram form covered in "Gorgon" silk taffeta, and trimmed with natural ostrich drabs, black velvet flowers, and really glorious plaid ribbon from Bulldog and Baum that I thought couldn't get much more Dickensian-Christmas if I tried! I stuck the red berries on at the last minute, because, well, Christmas. They're easily taken off for less-Christmassy events! As with the mantle, I wanted to be Christmassy but not so much so I can't wear it to a plain old winter event!
The pattern originally started life as a Lynn McMasters pattern that I tweaked pretty heavily for the peach bonnet I wore this past summer with the green lawn dress. I wanted a lower, more transitional brim to go with my c1838-40 poplin dress, so I did a bit more tweaking to the brim and got this. There are a couple things I'll adjust further if (when, let's be serious) I make this again, but overall I'm very pleased with the shape! There are no patterns that I know of out there for that transitional bonnet shape out of the big-brimmed and poke-bonnet 1830s into the coal-scuttle type of the 1840s, but naturally that's what I wanted, so I had to make life difficult for myself. ;)
Pics of it on the styrofoam head, and slightly crooked. But you can see the trim a bit better! 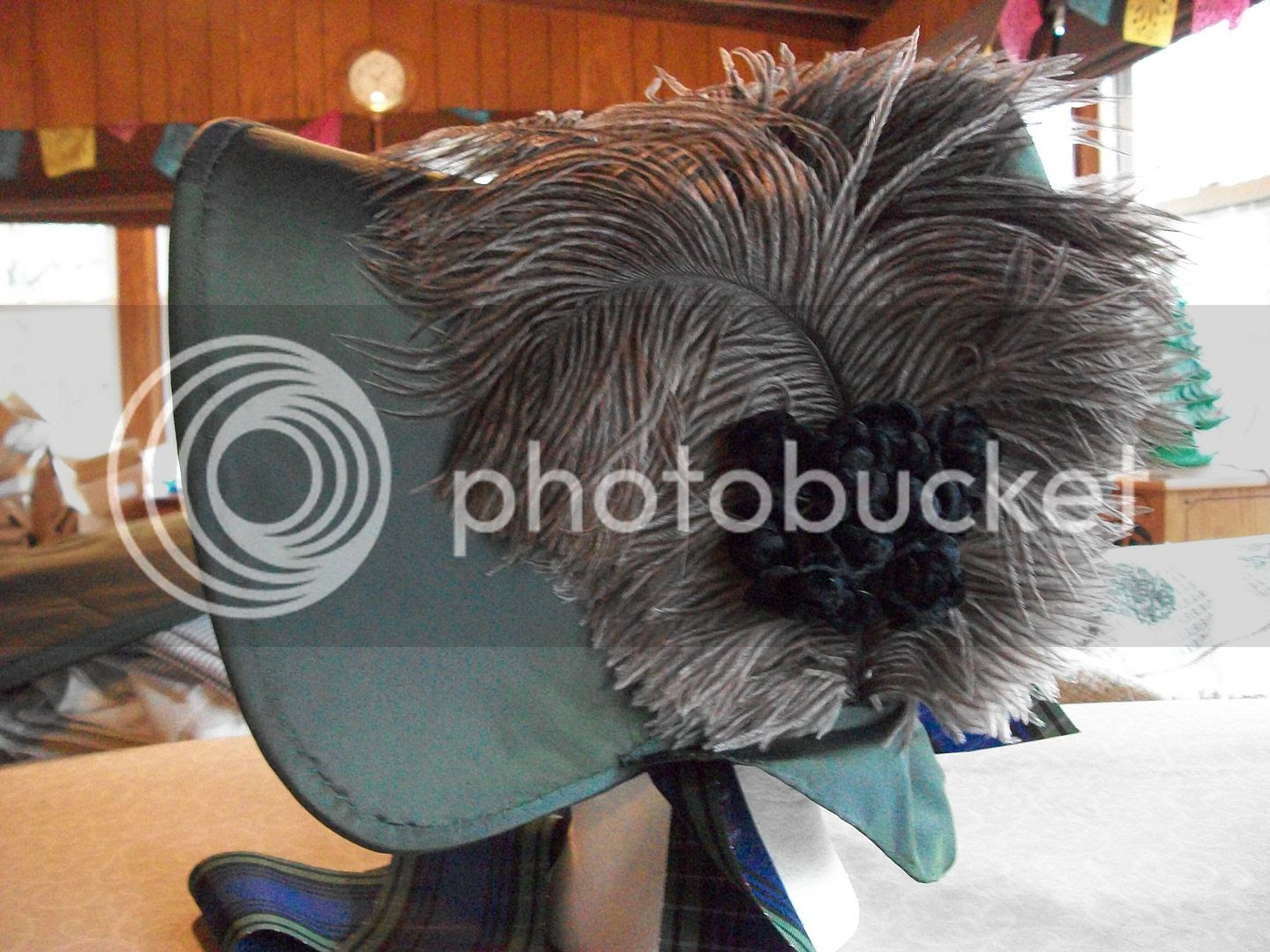 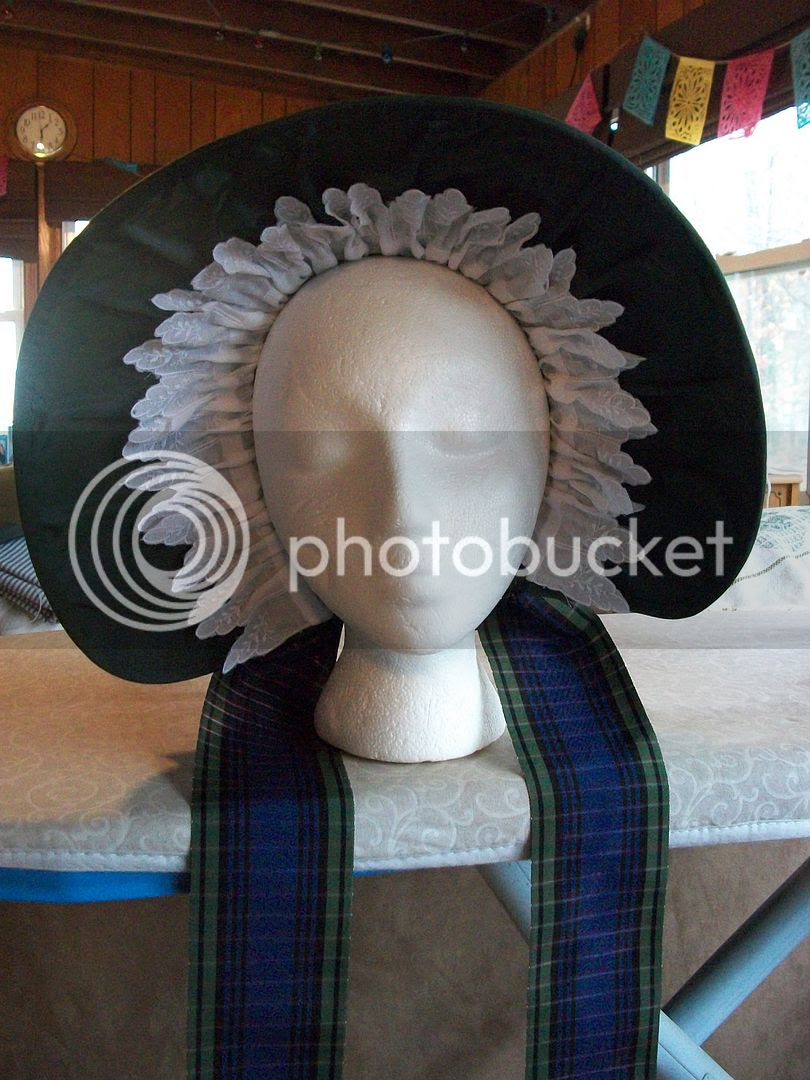 You can see a bit more of where I pieced in the lace I wanted to use inside the brim - it wasn't really wide enough to be seen behind a head, so I joined it with a strip of lawn and called it a day. 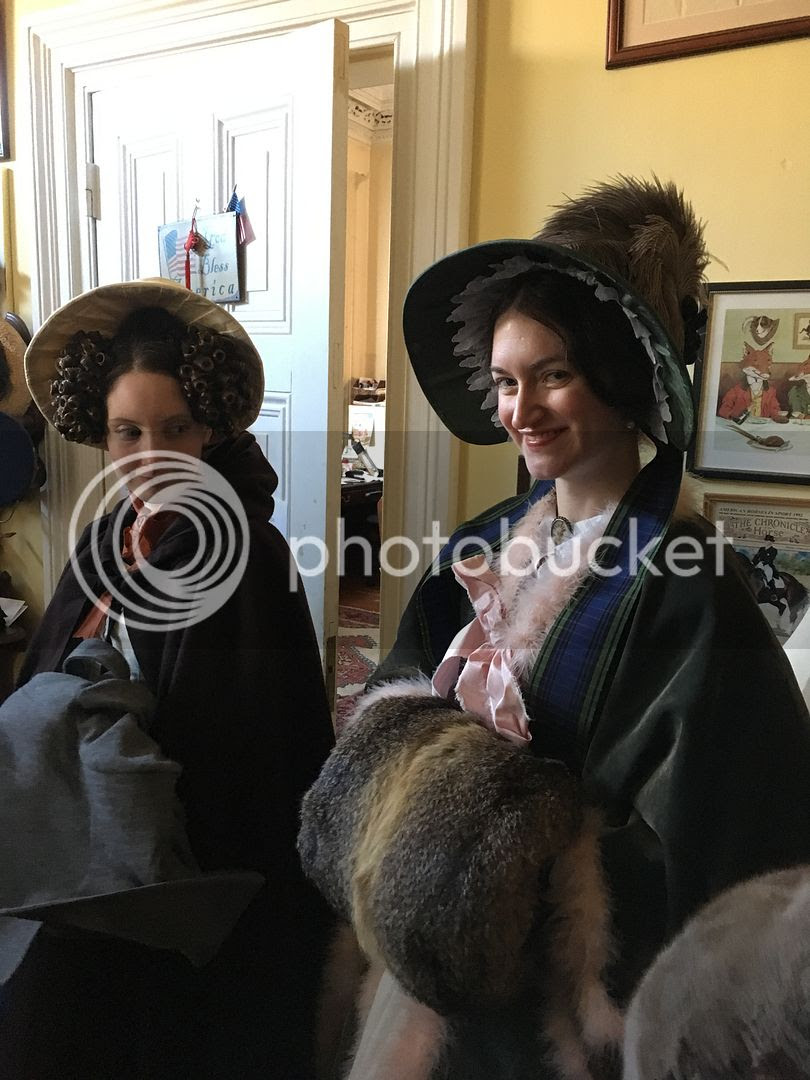 I am also responsible for this outerwear on Robin of SewLoud - she borrowed my old velveteen mantle (a girl can't have too many early Victorian velvet mantles...right?) and I made the bonnet for her. That one's covered with green and red shot machine-made dupioni, and trimmed with the same, rooster feathers, red ribbon, and lace inside the brim. 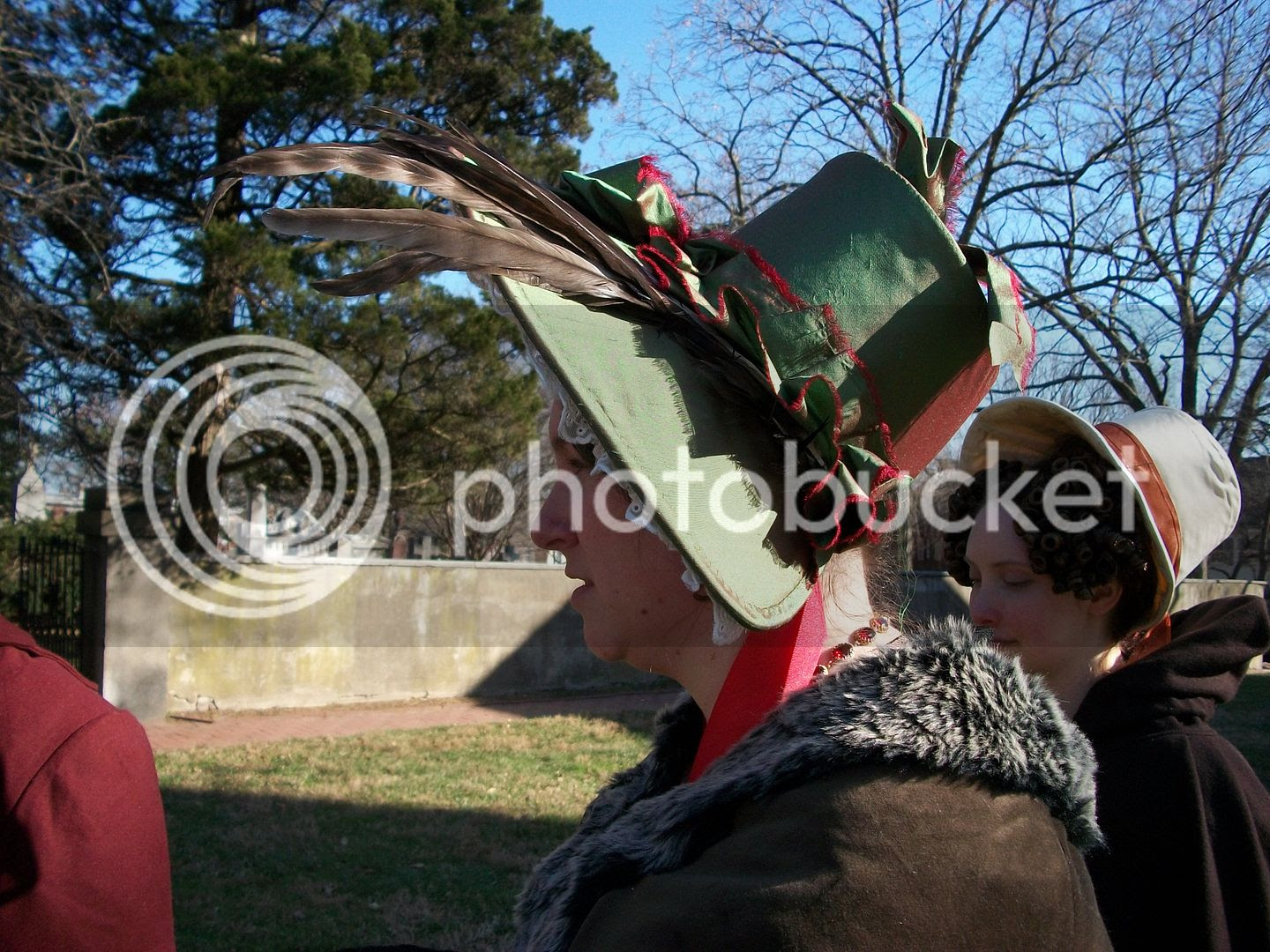 She wanted a more on-the-nose Christmas bonnet, and I think she got one! ;) And just a couple more photos, because I like them! Thank you, New Castle, for having a charming green upon which to take costume photos!