Halloween at the Metropolitan Museum of Art

- November 02, 2014
I went up to the Death Becomes Her gallery exhibit with a few friends, we met up with some more of our costumer friends, and had a really good time! There was only one lady in historic costume that I didn't know (at least as a friend of a friend), which either means I know a lot of awesome costumers (which is true), or that there were way more gothy-steampunky outfits than historic (which is also true). It was fun to see so many people dressed up at the Met though, and lots of them thought we were super-awesome...which is always very flattering!

Plus, I was on CBS news! Just very briefly (they took a couple-second clip from when I was modeling for the drawing session), but, still yay! Link to CBS's video here...and yes, Leia totally is a fashionista in every era, hehe!

I wasn't terribly concerned with getting pictures of my dress, partly because I'm not thrilled with it, and partly because the lighting in a museum is not great for getting photos of a black dress! There are a couple on my own camera, and then a friend got a shot of some of us modeling for the drawing class, but that's it. If more turn up I'll post them too; I'm sure there are lots of the general group floating around! 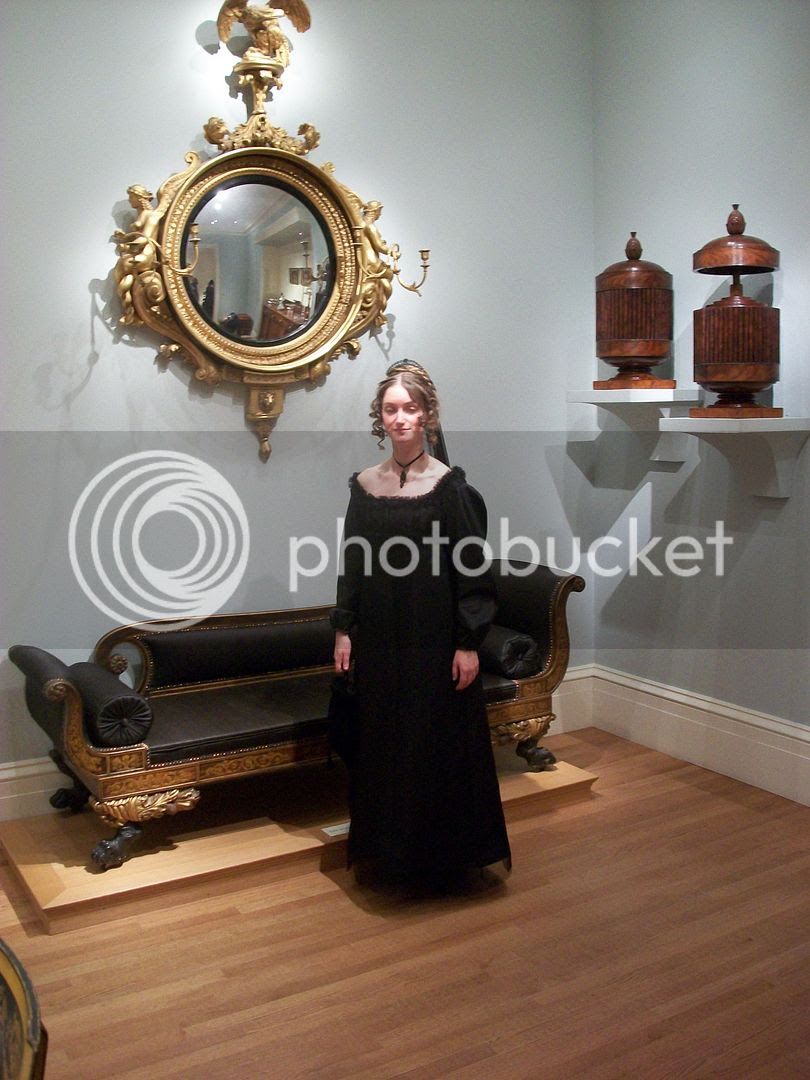 Veil of silk gauze, dress base and sleeves of soft silk taffeta, and bodice/skirt overlay and trim of silk organza. Sewn by hand. I am now very tired of sewing black... 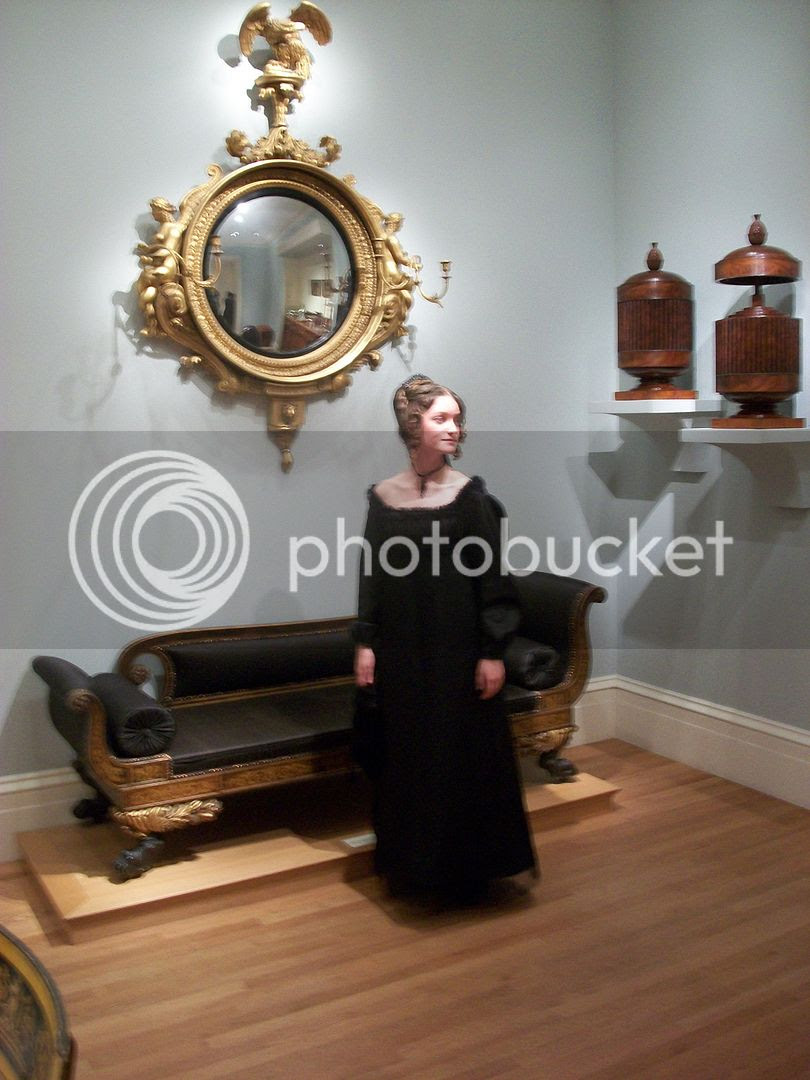 There was supposed to be trim on the skirt, but the bodice was giving me fits, so I ran out of time for skirt trim. Not that it matters, since you wouldn't be able to see it anyway!

I don't think I ever actually posted my inspiration for the dress, which was this plate from 1816: 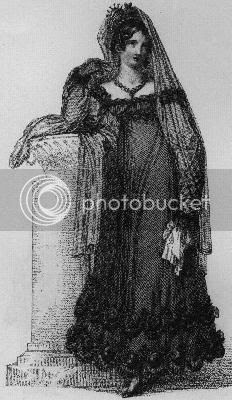 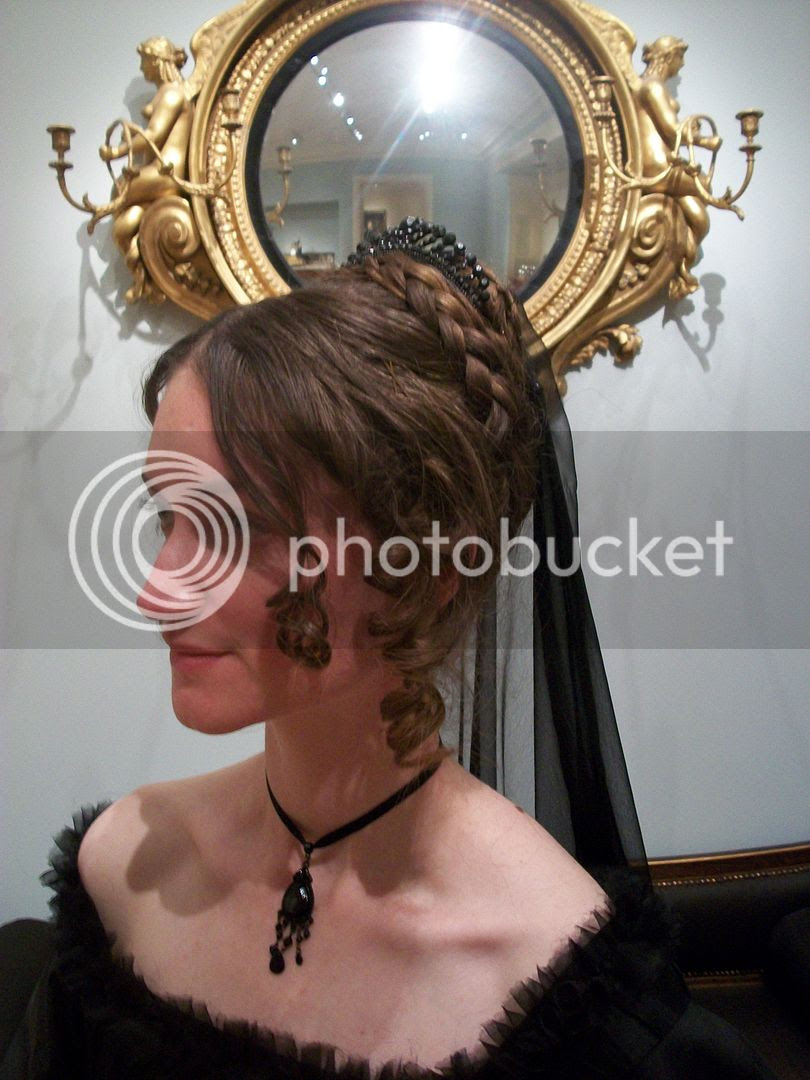 I was rather pleased with my hair, at least. And the front curls stayed in very well all night...at least til they got rained on during the (very brisk) walk back from dinner! I think the veil was my favorite part of the whole thing...you can't tell from the photos, but it was a large rectangle of silk gauze, which I found very fun to hold onto and run around going, "wheeeeeeeeeeeeeeee!" while it breezed behind me. That veil will definitely be making another appearance with some other outfit. And I might buy some of the same gauze in white for another one...

And here's a couple shots of us modeling for the gesture drawing class. We did two sessions; the first was alright, but the second was definitely longer and started approaching the "what will they do if I fall over because it's very warm in here and my legs are asleep and I haven't had dinner" point. 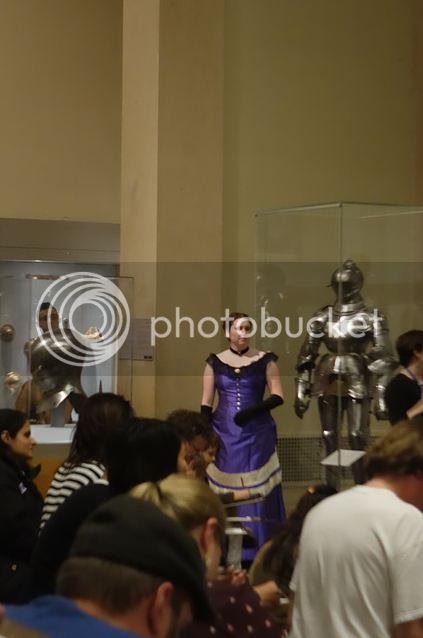 I ought to trim the hem, because I've got the strips of organza for it, and it doesn't look complete without trim...but I don't know when I'll get around to doing that! Other things to sew, you know.