(I wore it once, for ten minutes to take pictures in the back yard, and have already gotten a mud mark on the hem and snagged the hem thread. I'm good.)

I'm making an open-robe-turque-thing to wear over it to an event on the 15th, so I did want to get a few pics of it sans robe-thing! I think the clotheslines next to my head really make it, don't you? (I was pressed for time so couldn't get to one of my nice parks, but wanted to get it out of the way!) 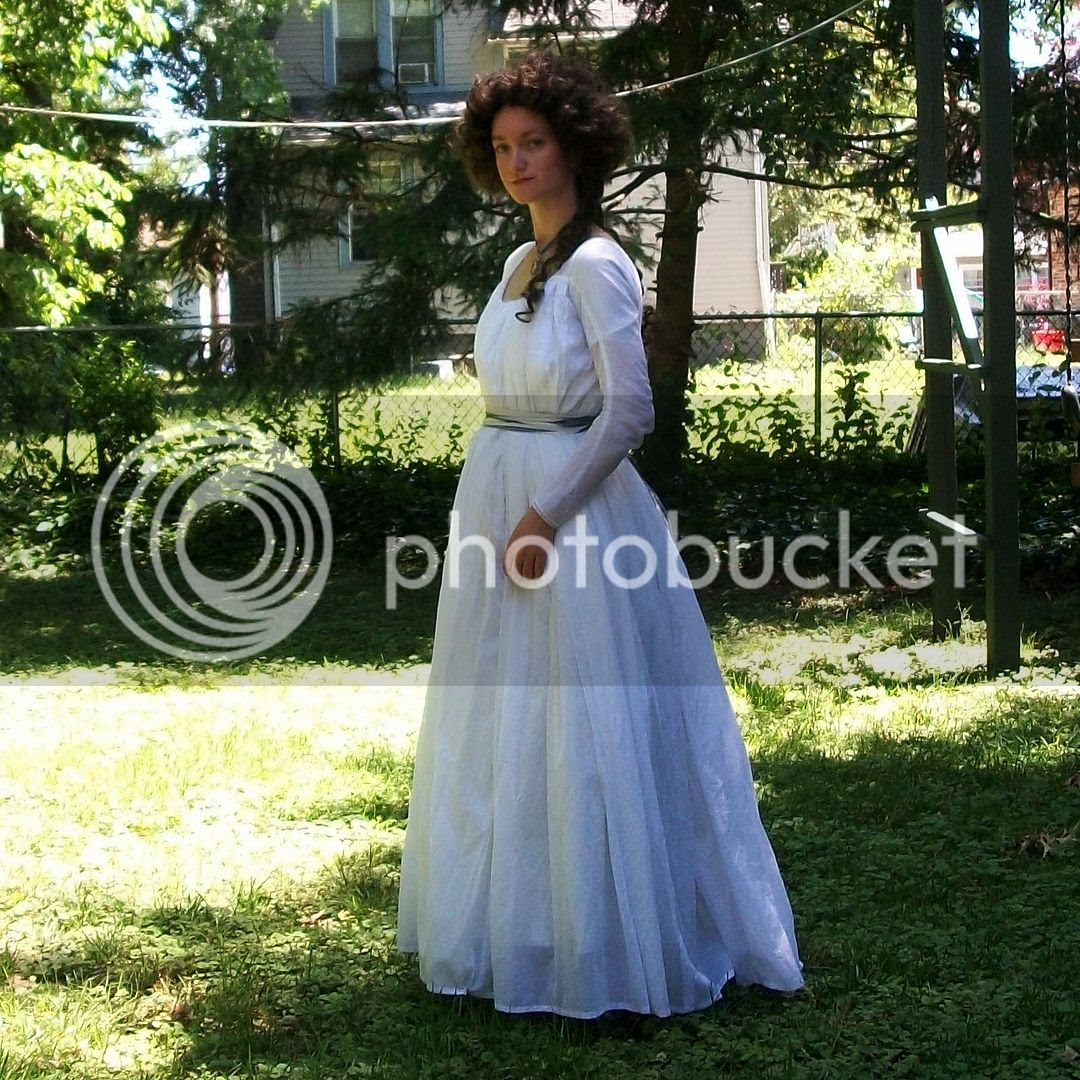 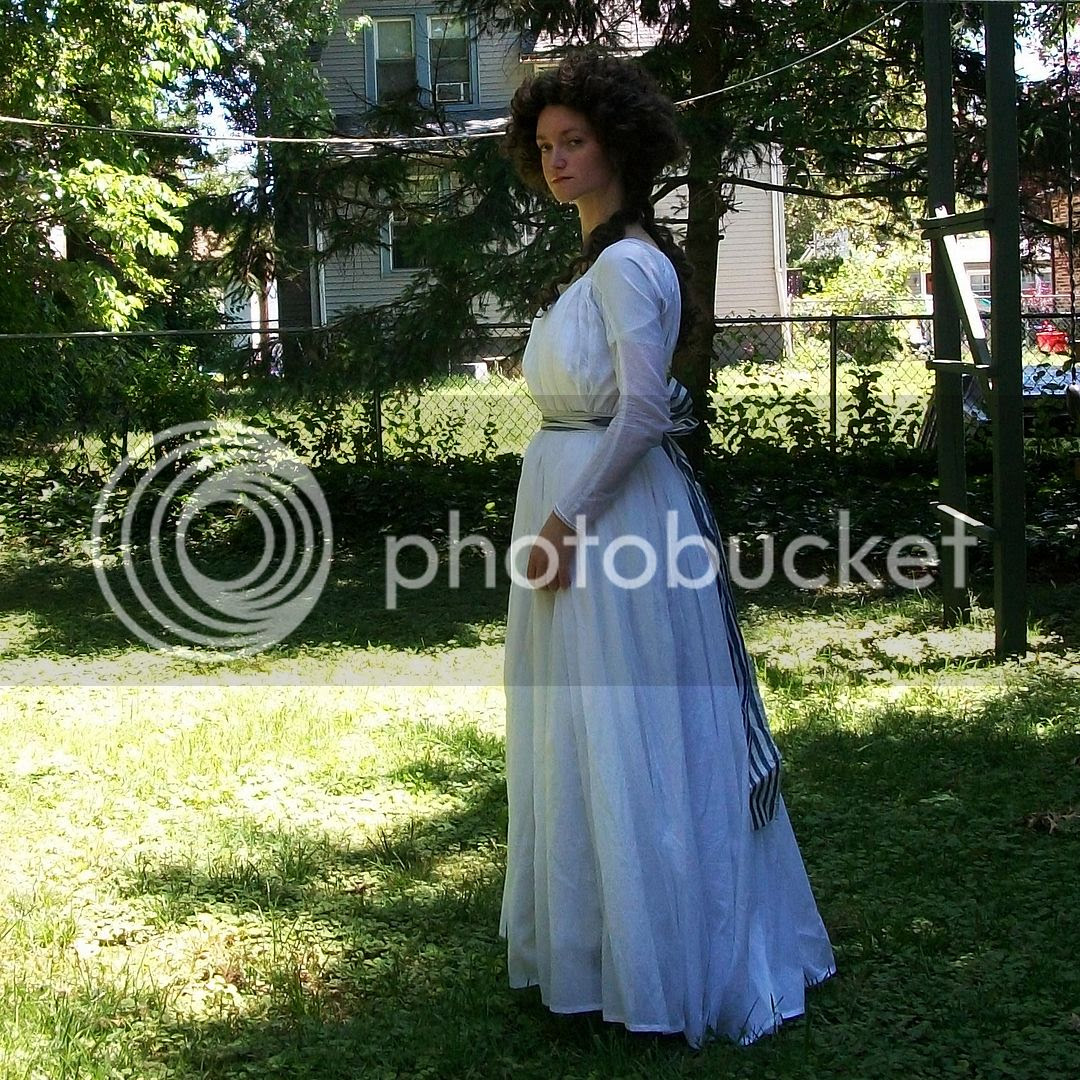 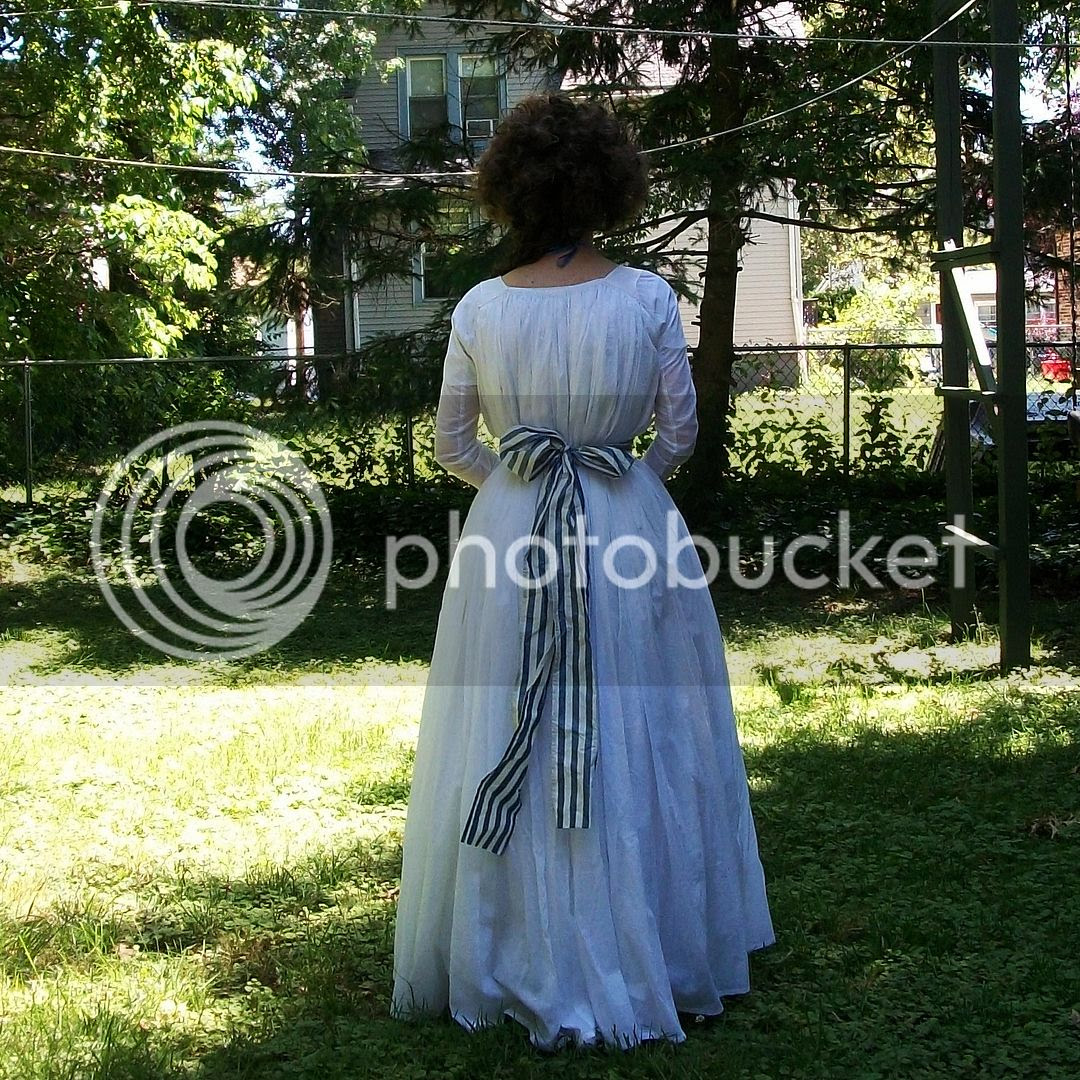 I sewed a good bit of this dress last summer, but couldn't make the event it was for, and ended up not finishing it. So when I realized I'd have a summer 18thc event this year, I thought I'd drag it out. (And I don't love it, but that's more the style of dress on me than anything else.)

The dress itself is just panels of white cotton voile sewn together, with armholes cut out. The shoulder straps are the the only lined bit, and lined in white linen. It's all hand sewn with cotton thread (because, seriously, it's like fourteen seams in the entire dress), and closes with a drawstring at the CF neckline. I didn't bother with a drawstring at the waist, because 1/ I'll never wear it without a sash, which holds it in well enough, and 2/ sewing another 100"+ casing didn't seem like a lot of fun at the time.

The sash is three widths of silk taffeta sewn together and hemmed. It refuses to not fold over on itself and be all scrunched up. 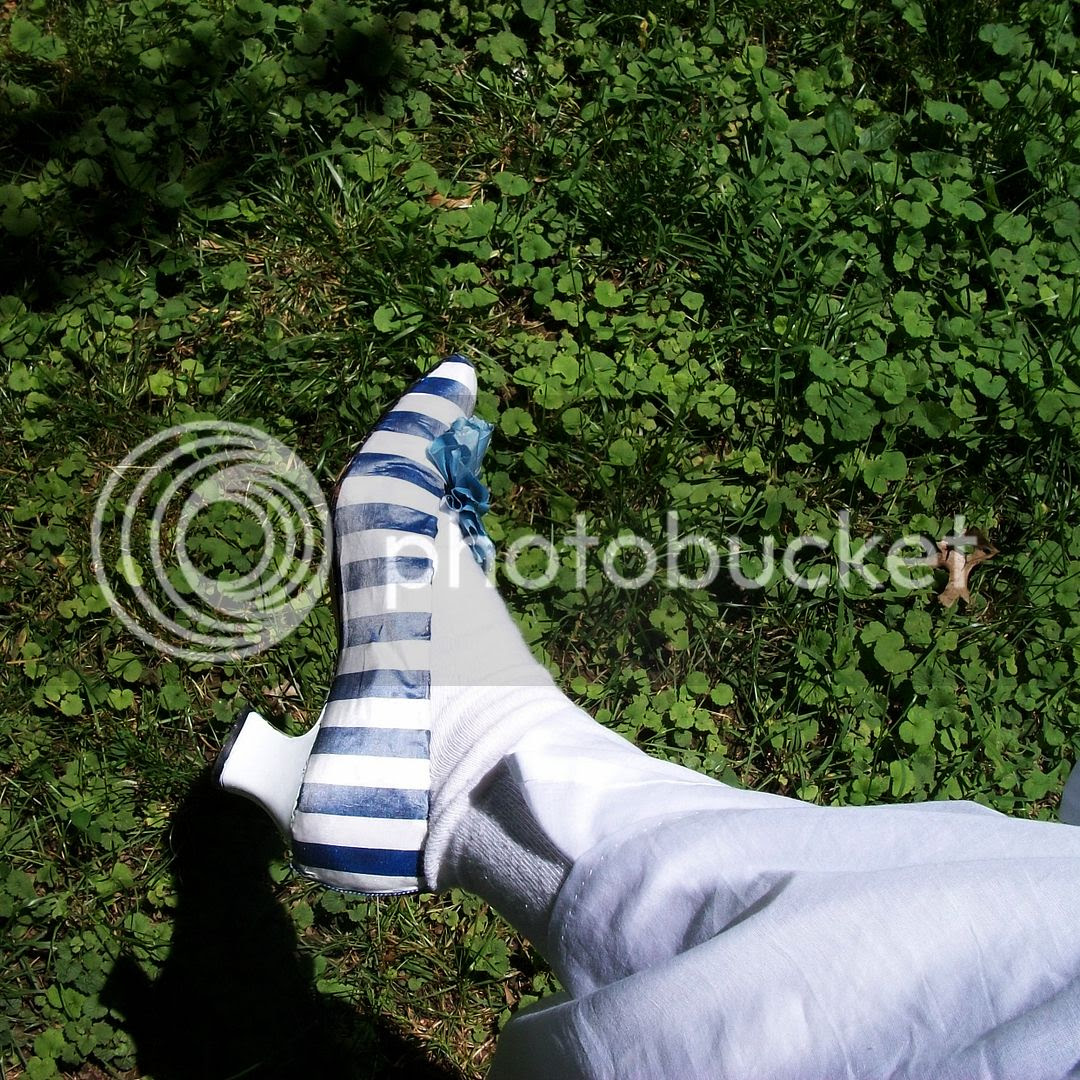 I also spruced up some shoes. They were some appropriately-shaped $5 dark blue heels from ebay. I painted the heels white, covered the rest of the shoe in white flannel first (so the base shoe wouldn't show through) and then the striped silk taffeta. The light blue silk taffeta cockades are sewn to American Duchess shoe clips - which are wonderful, despite the fact they bit me a few times. Dangerous things!

Oh, and they're probably more glue than shoe at this point. They're just play shoes (I've got my lovely Fuggerwuggers for muddy outdoor events), so I don't mind in the least! 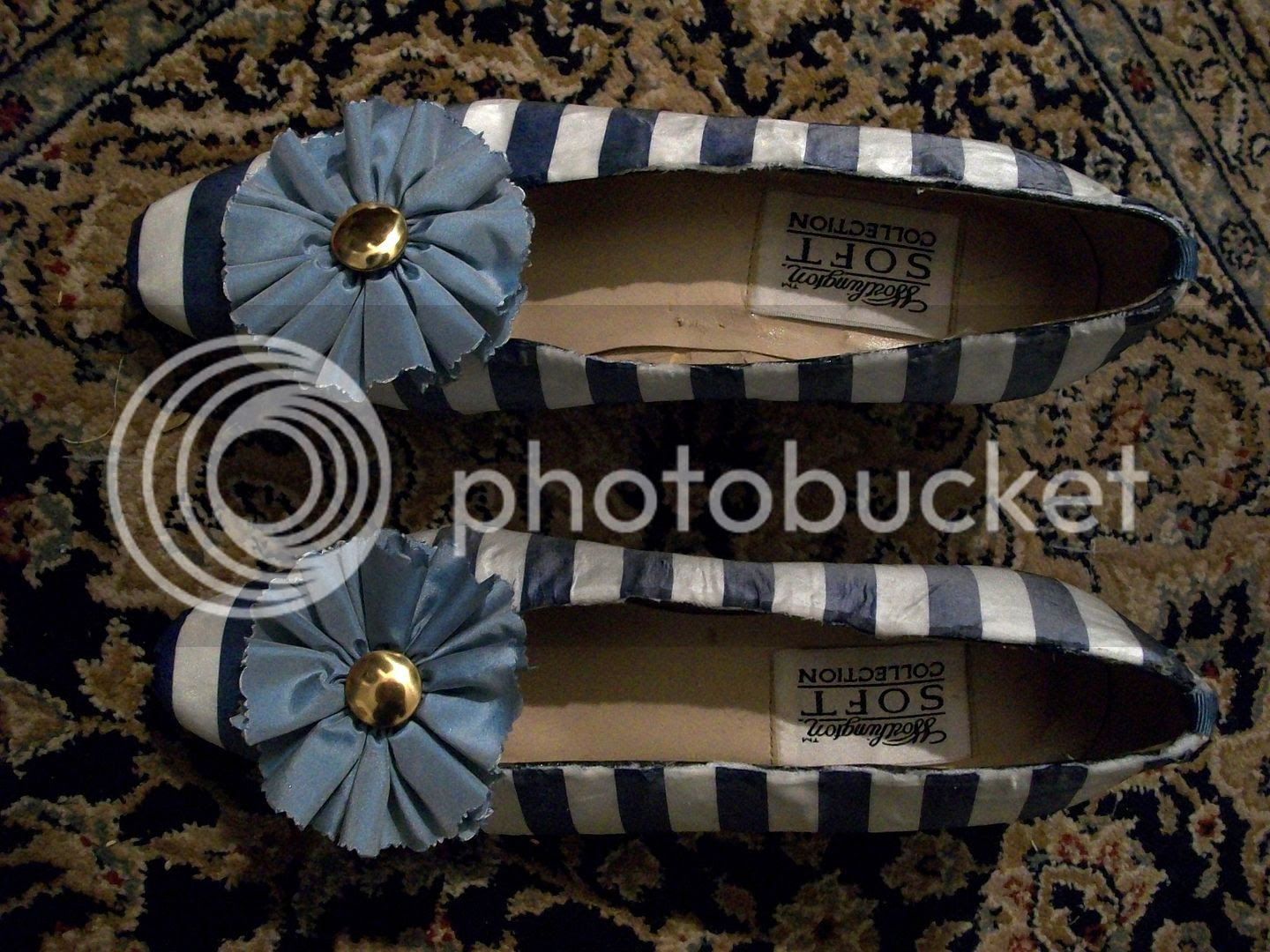 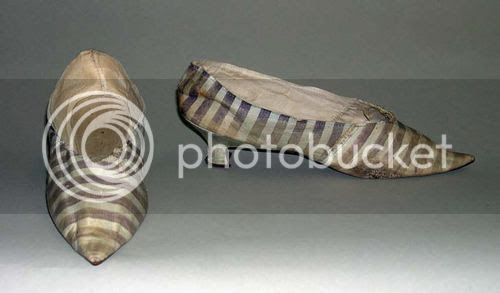 Since, as I mentioned, this next event's coming up soon, you may expect to see a little more posting around here! I've been pretty lazy. But I'm planning an 1860s sheer dress for an event in July, and...well, ok, after that there's nothing til September. I'll try to be more exciting on here!