See, I do still sew! Not as often, or extensively (I got married and bought a house this year), but I still sew and even occasionally finish things. Heh. Not that often. Heh. Instagram is the place to be for second-generation costumers who are too lazy to do writeups much (it me. I mean me), but I'm still hanging on to the pictures-AND-words format. So there, steadily advancing social media trends.

Regardless...I've got an opportunity to do some 1890s in January, and I wanted to see if I could bang out a new, mid-1890s dress over break. I haven't yet done any banging of outfits (ahem), but I did start and finish a couple of new petticoats! I have, uh, a lot of petticoats, but none that give a nice fashionable A-line for the mid-1890s. And fashionable was pretty wide mid-decade!

Anyway, I made two new petticoats over the past few weeks, and finished the Big Fluffer the other day. Warning: bad pictures taken at awkward angle ahead. I'm not sure where the camera tripod is and the husband is still learning to take costume pictures so he's not the best tripod. ;) Plus I'm on winter break and refuse to get pretty for the camera!

First petticoat is relatively plain - made of cotton organdy with a single lightly-gathered flounce trimmed with some very stiff and scratchy lace. Bottom basic! 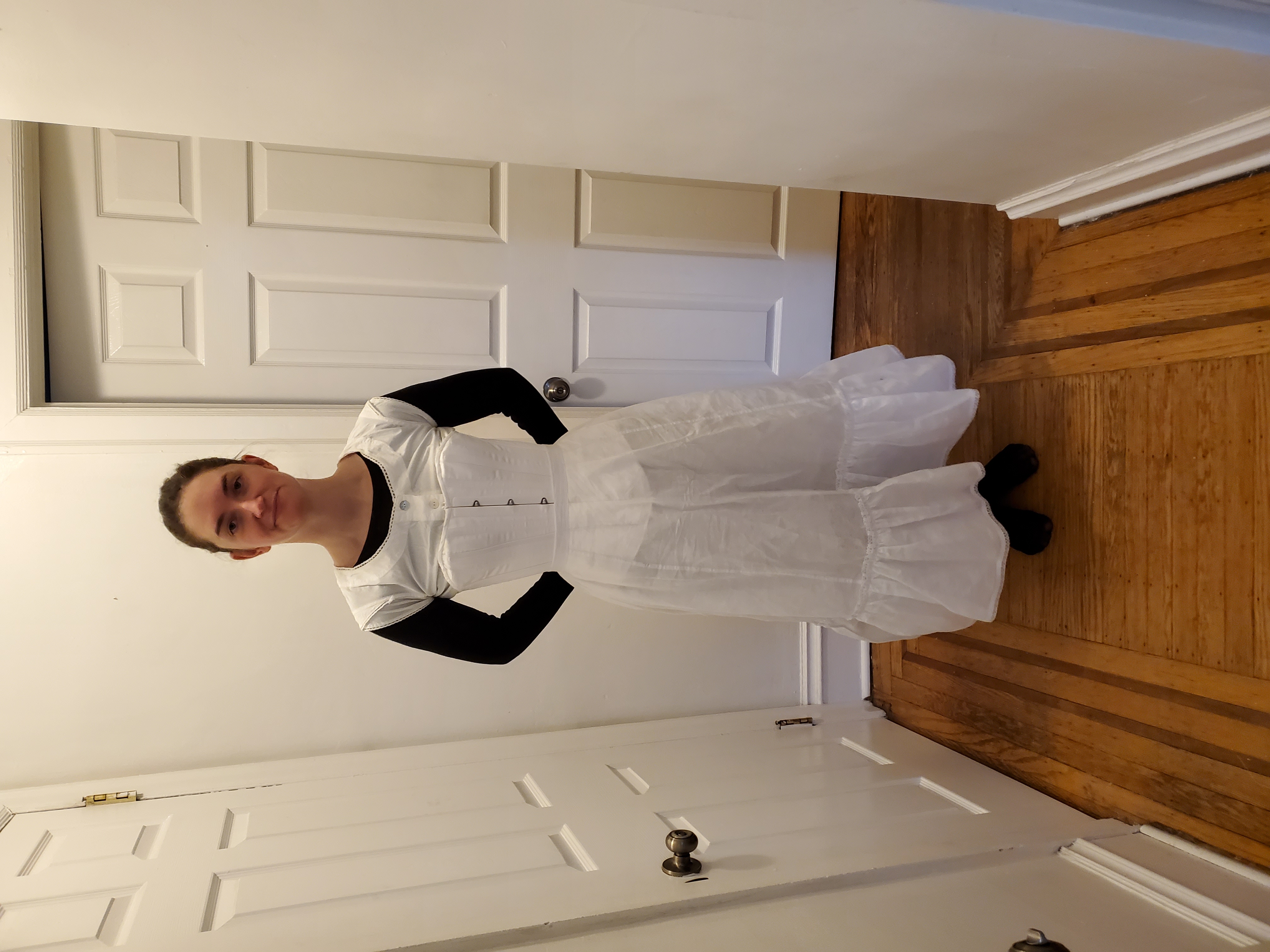 I'm also wearing The Smallest Bum Pad - I think I originally made it for an 1860s hoop pad, but it works for everything from early 1790s to mid-1890s here. Anything I just want to hold out the back of a skirt a wee bit! I'm wearing it lower here, over my hips and on my actual bum, to keep bulk away from the waist. Not looking for a bustle effect here! 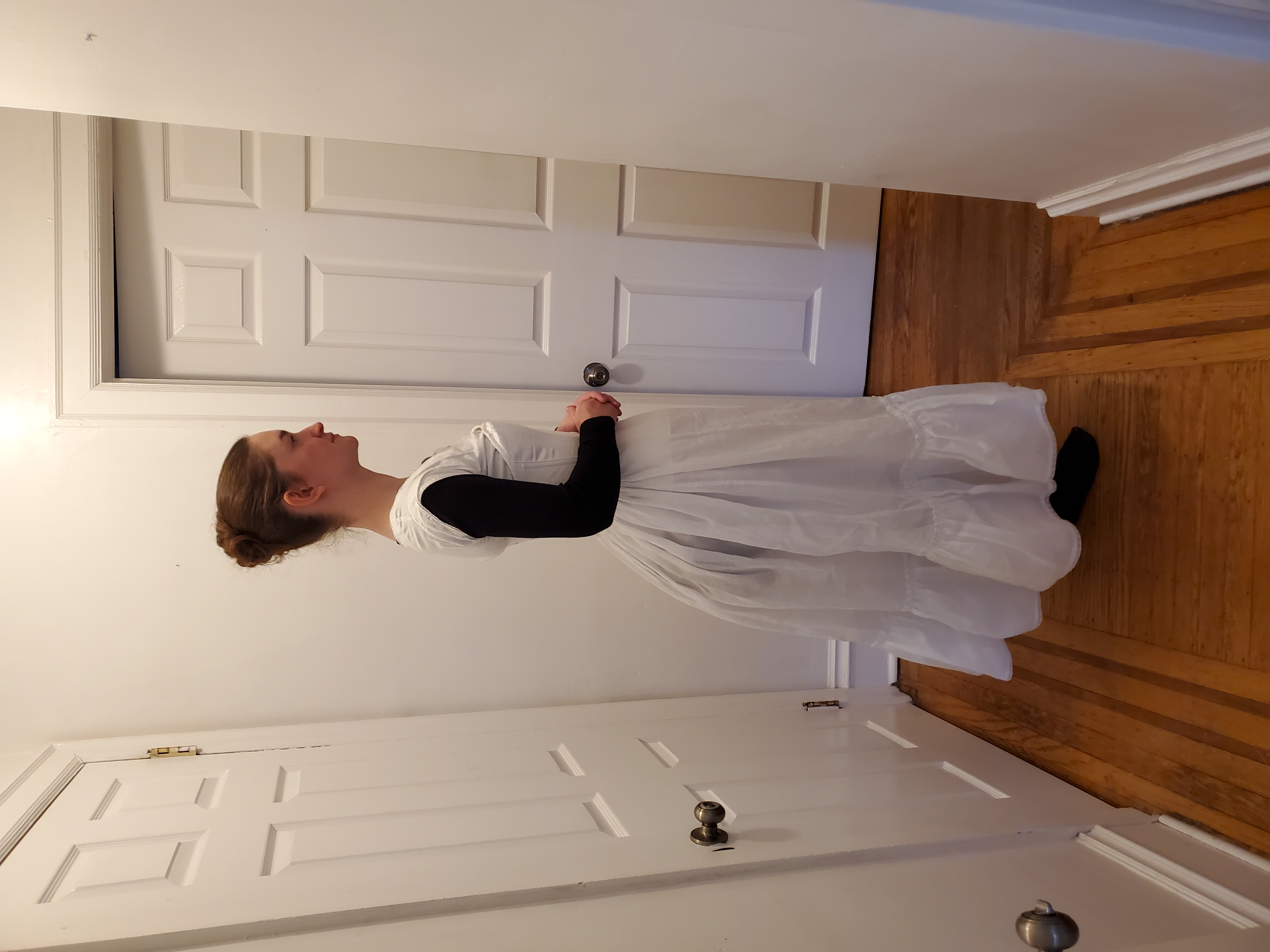 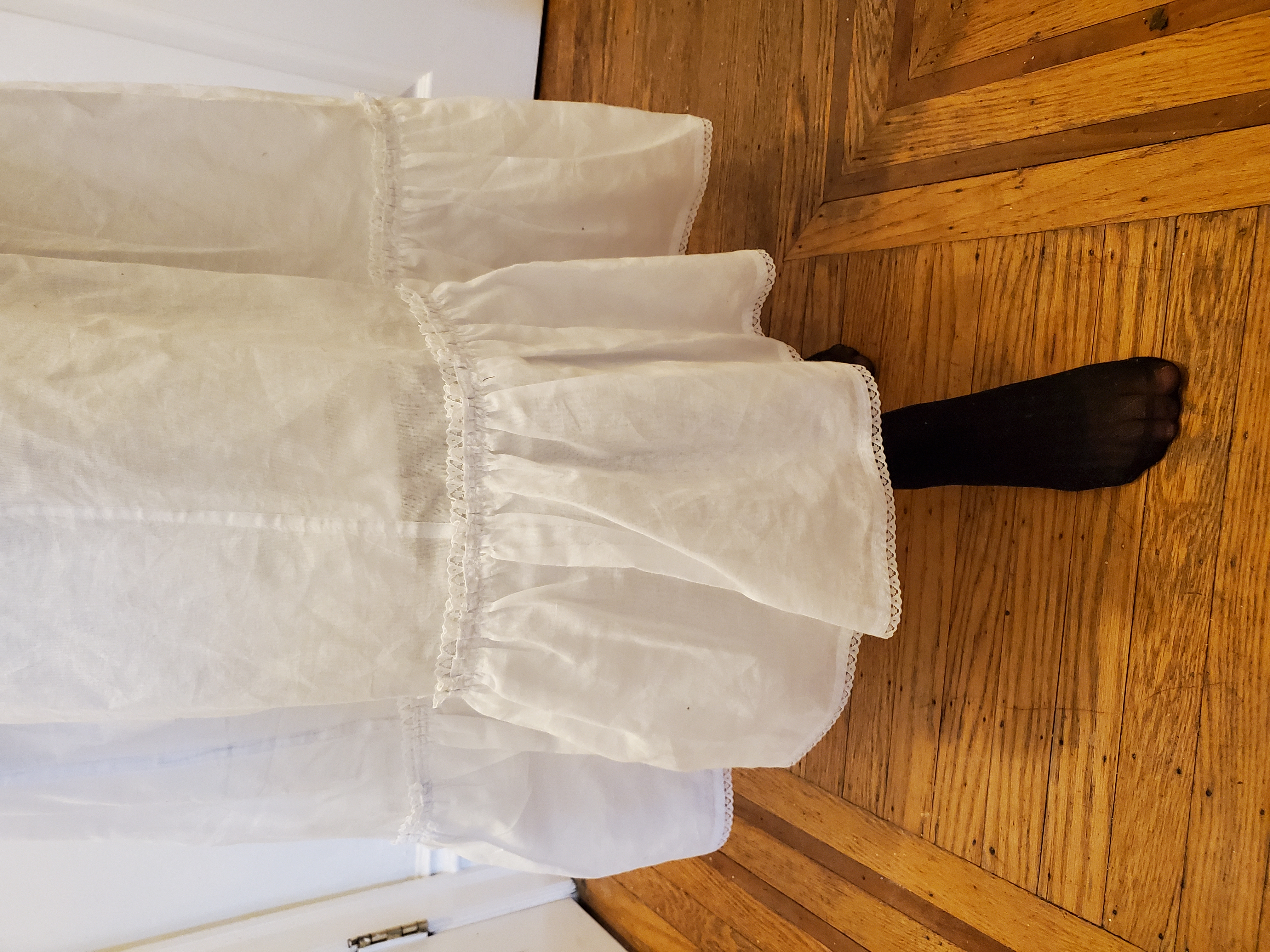 If I wanted a less fashionable silhouette, I might stop here, or put one more plain petticoat on top of this one. It's reasonably A-line, and will hold a fairly lightweight skirt out well enough. However, we're not looking for "reasonable" here...

The Big Fluffer is made of acetate taffeta, shot emerald green and black. I'm still a yuge fiber snob, but I didn't have any dress lengths of silk taffeta that I wanted to sacrifice for a petticoat! Found a 10-yard length of this stuff on ebay for $3.95/yard. Yes, that'll work! 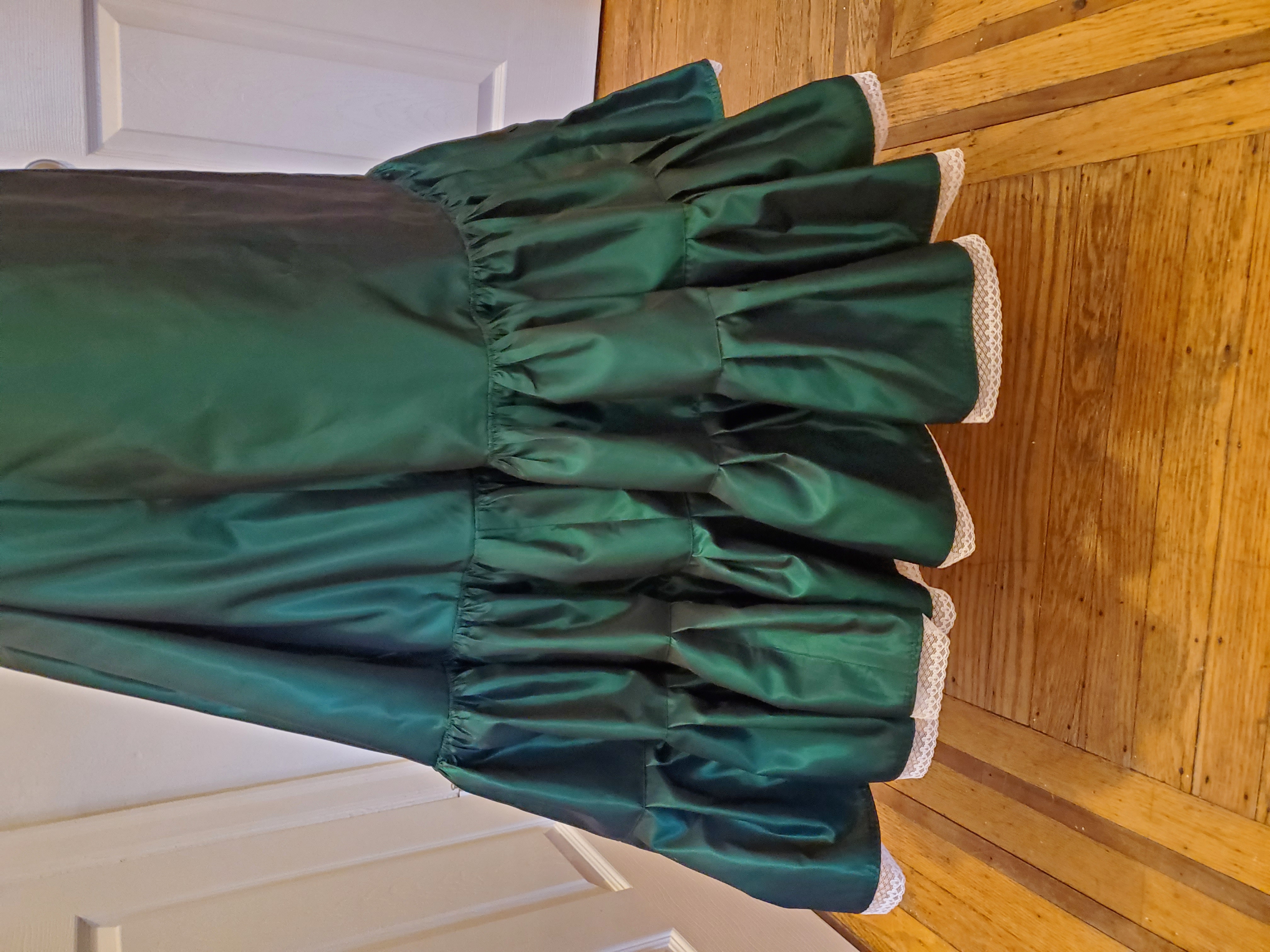 It's good-quality enough for a dress, really, but I'm so used to working with natural fibers that I'm too hard on synthetics. I'm not nice enough with them! This thing has water spots and shiny marks all over it, not to mention the scars from ripping out stitching. I don't really bring the best and the brightest to my petticoat game anyway, and add in the acetate factor...just don't look too closely! 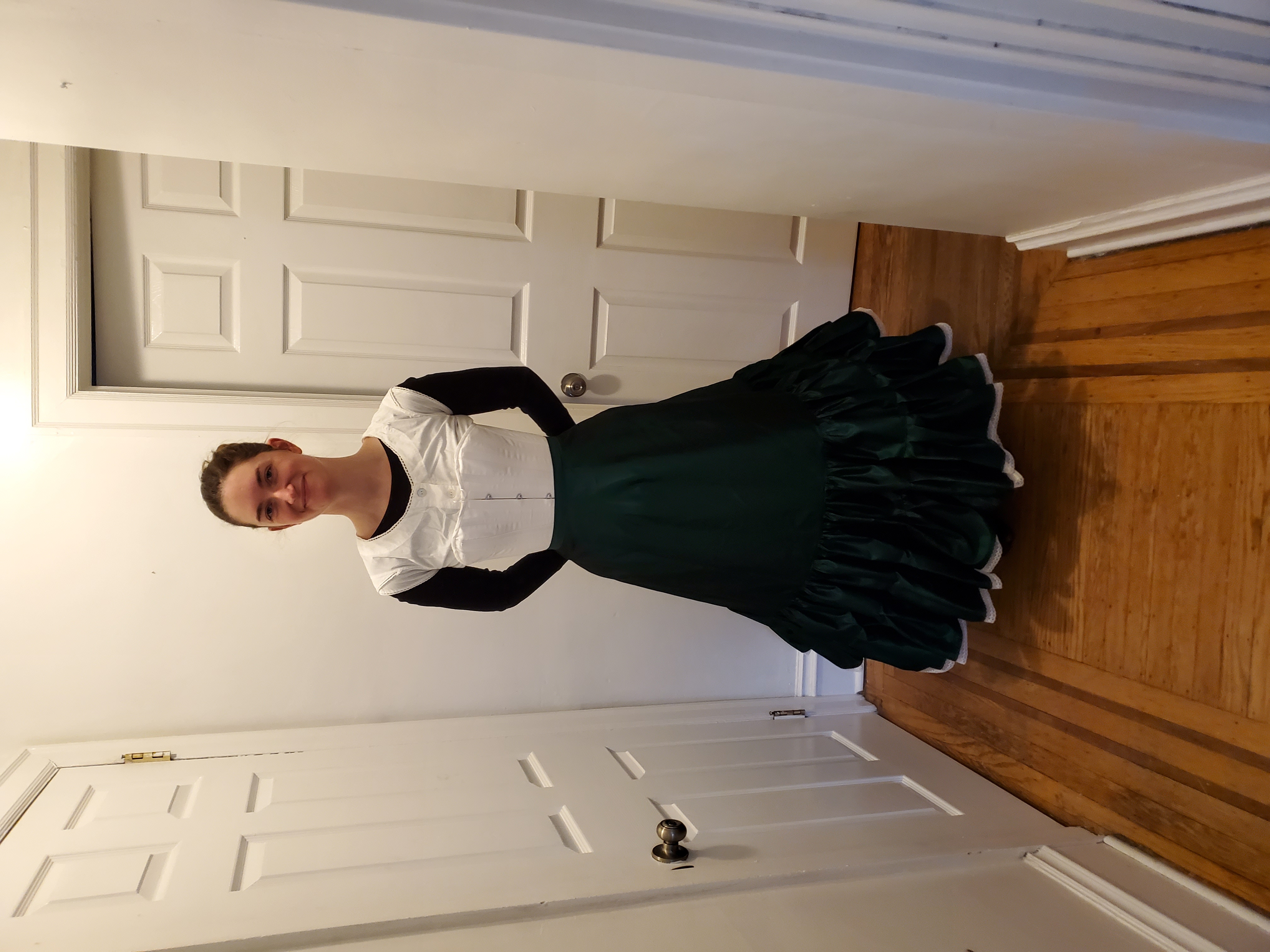 The ruffle is a two-parter: 17 yards in the bottom ruffle pleated into the 6.5 yard top ruffle, gathered to the petticoat itself. 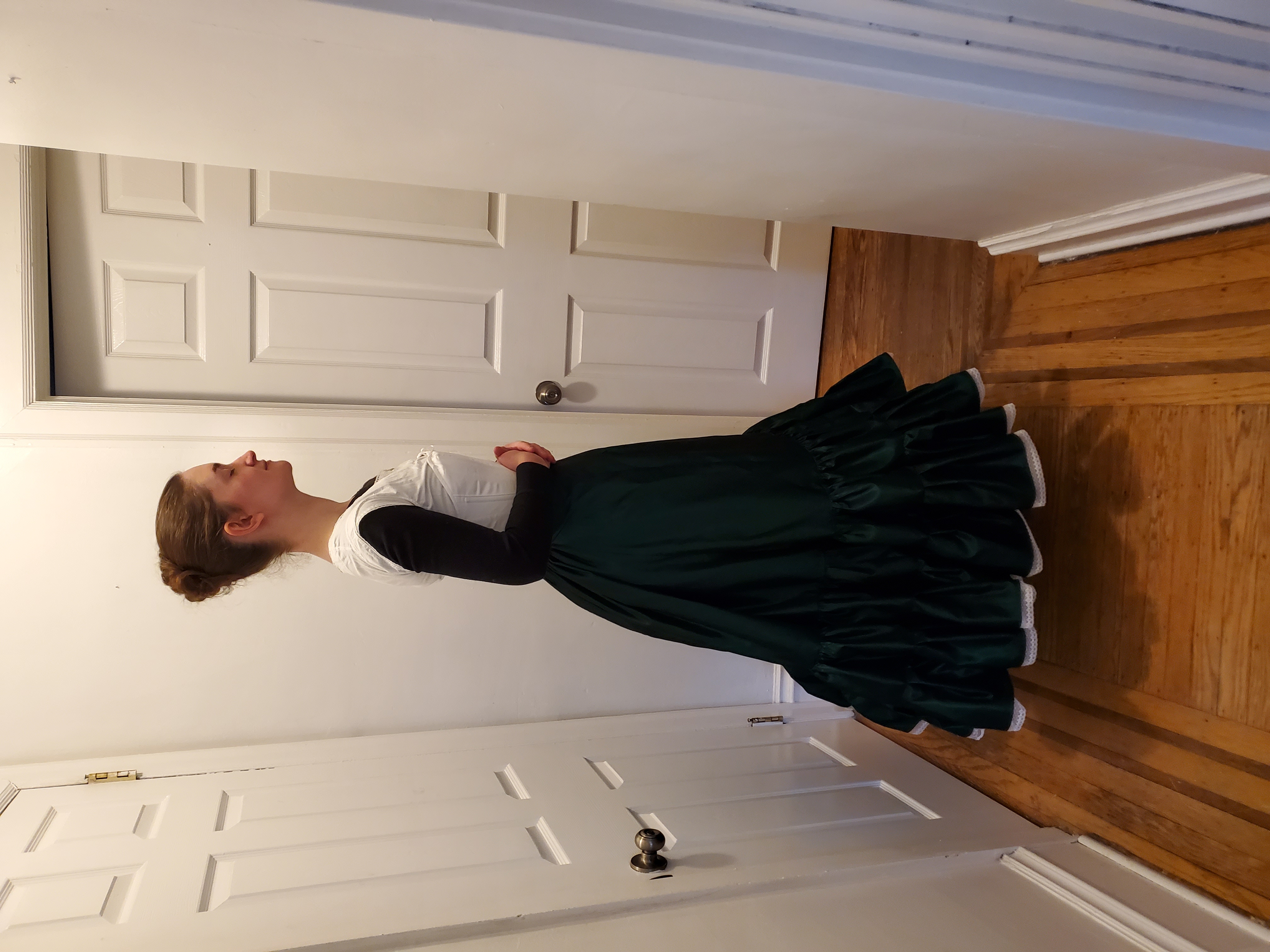 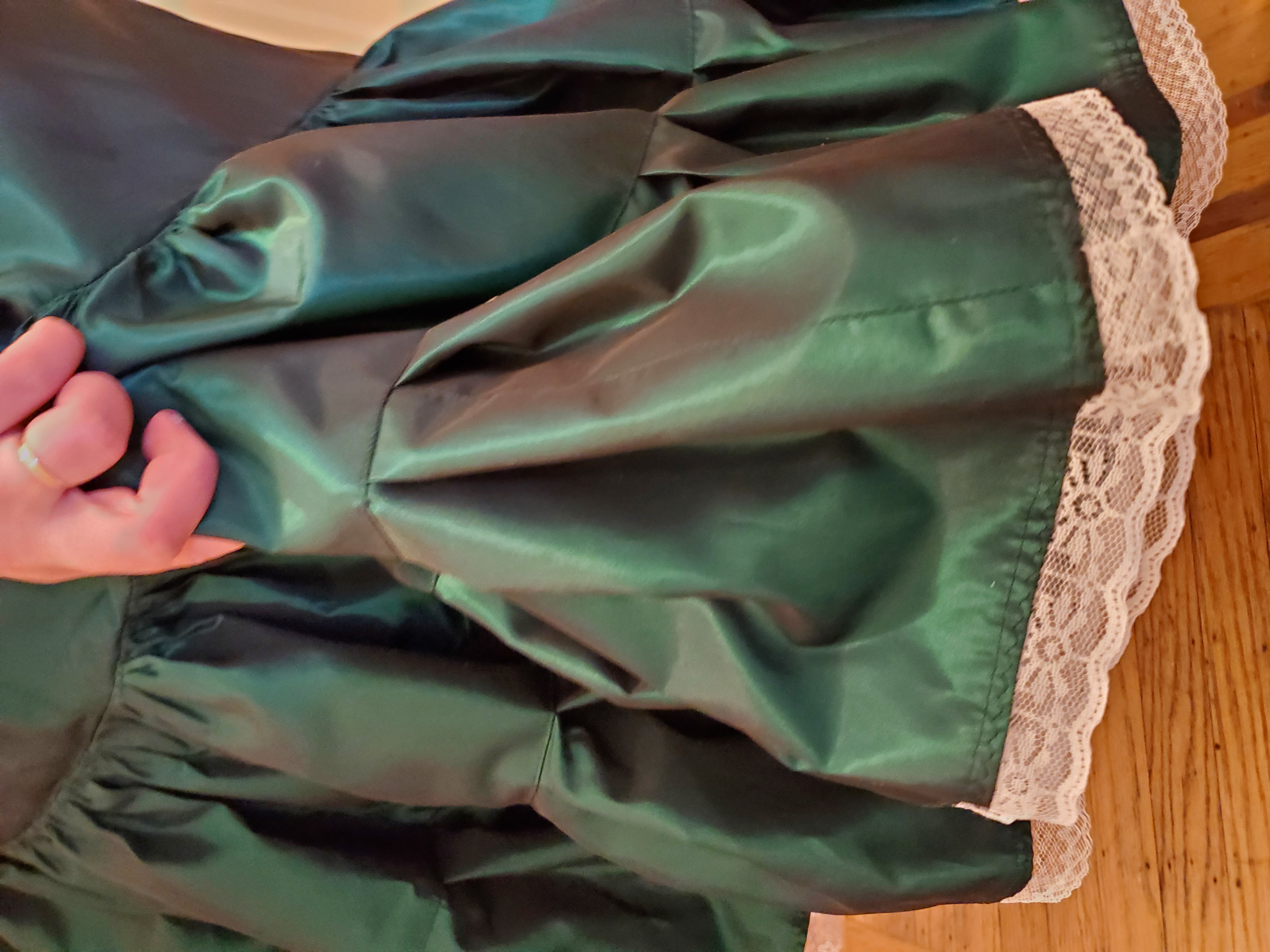 Probably my favorite part of this whole thing is the 2 feet or so of different lace on the bottom flounce. Hey, I had a couple of lengths of random somewhat-crappy laces, but none of them were more than 15 yards... xD I did manage to remember to put that piece round the back, anyway. Hey, I've seen it on an original petticoat! Waste not, &c. 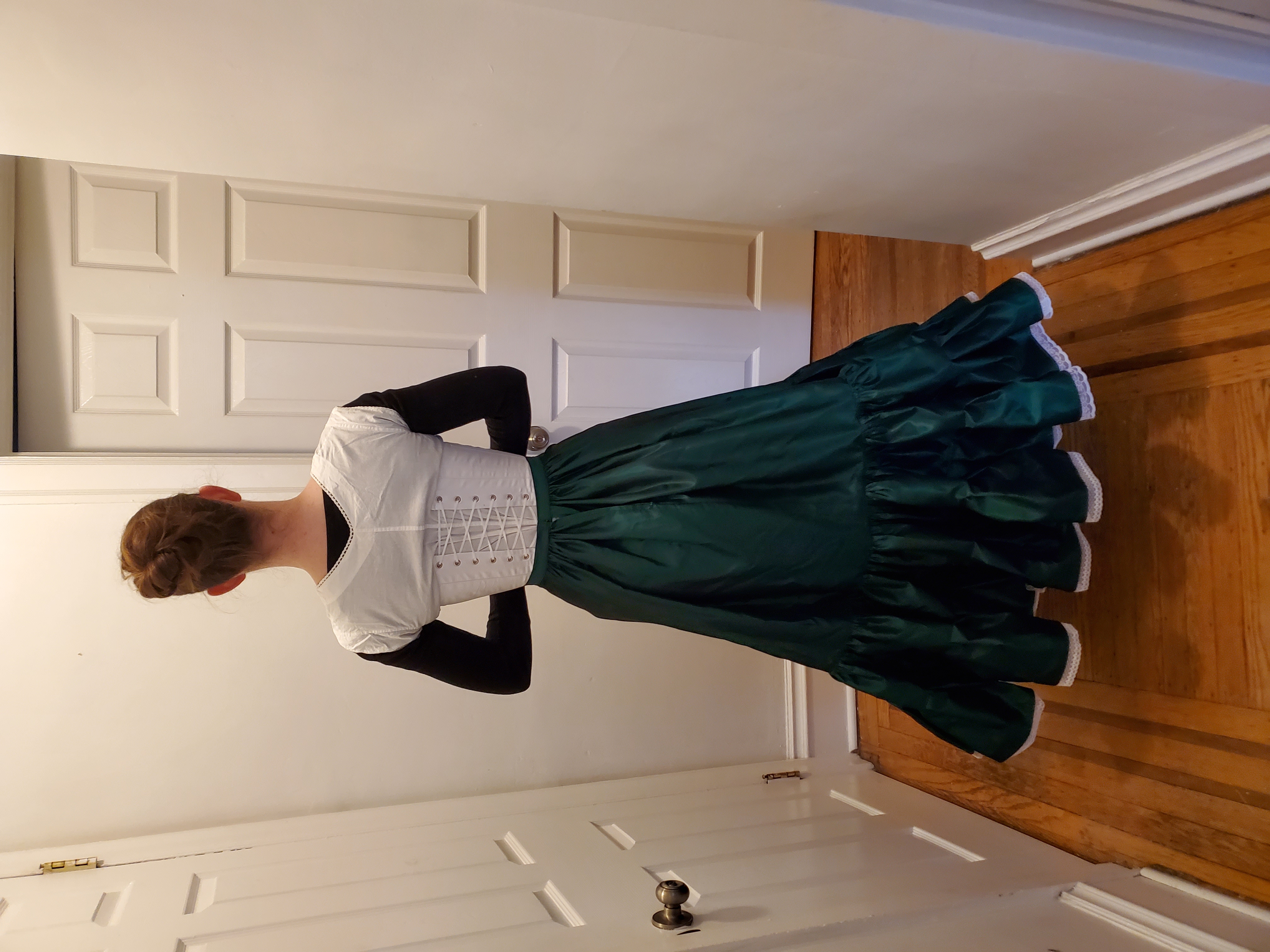 Now I guess I have to make the dress to go over it... eh I suppose so! If I manage it, it'll be some version of this 1894 "Velveteen Costume With Cape" from Ageless Patterns. I have a length of dark blue-green Pendleton wool that I think should work, and I bought a vintage coat off ebay for the fur.

It's currently in the early mockup stages - the pattern is a good 8" too big in the bust for me (don't tell me everyone was tiny Back Then!), plus all the rest of the usual fitting annoyances (adding an inch to the waist length, fussing with the back shoulders, &c. &c.), so it's currently at mockup 1.2 stage. And now it's cold and I don't wanna get undressed and put on a corset for fittings! Hmph.