This project was started on a total whim, back in March (ahem), I got through about three-quarters of the way through, lost interest, and just came back to them this week, all inspired to finish them! (Thank you, getaway with costumer friends last weekend!) It wasn't for an event, so better late than never? 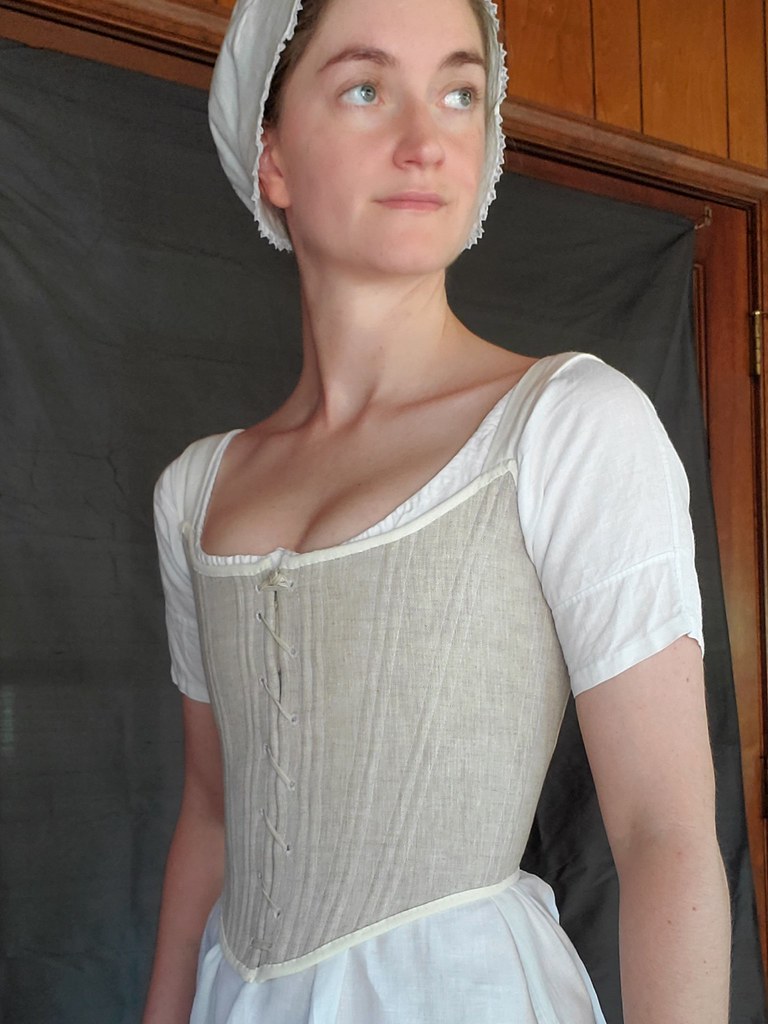 With almost no events this past year+ to inspire me, I had decided I wanted to make an outfit inspired by one in Costume in Detail, out of a print that would be working-class appropriate. I love dressing up, but I like dressing down as well - I think there's still a widespread misconception amongst The Public that working class women didn't wear stays/corsets and were all dressed in potato sacks, and that's just not true! Plus my favorite costumes are ones that feel like clothing to me, and middle/working class wear usually fits the bill for me, rather than my silks! (Which I enjoy as well, don't get me wrong.) 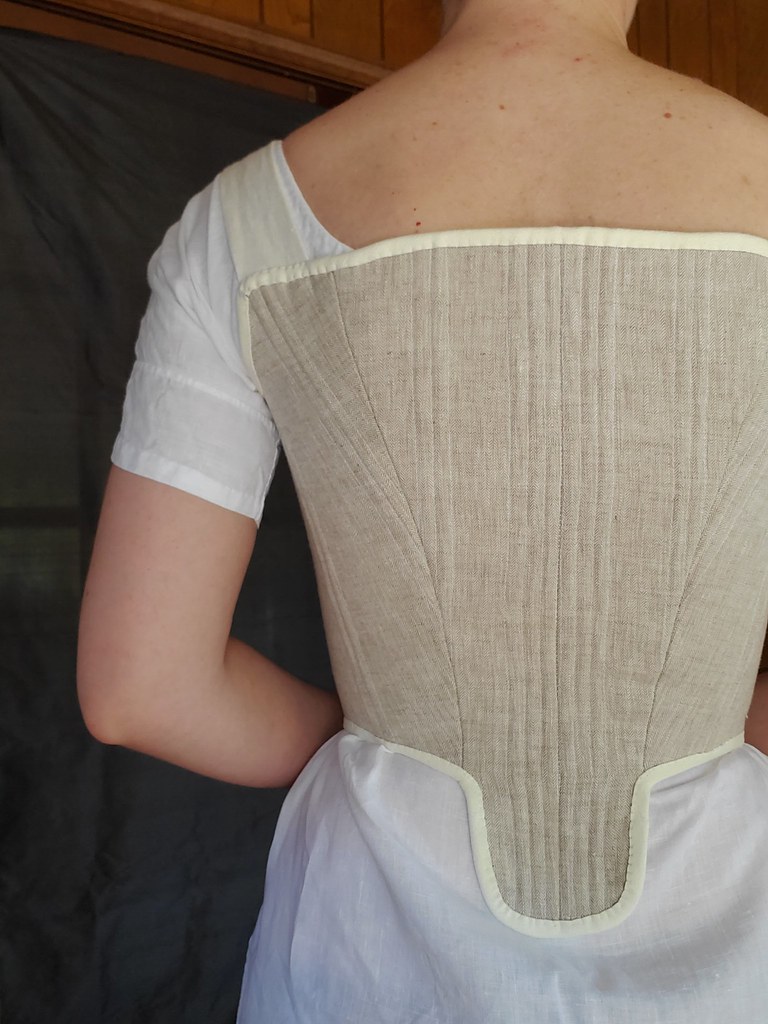 I got as far as buying the fabric and sewing together the petticoat panels before stopping to consider that my lovely new Regency stays from a Redthreaded pattern (...which I still haven't posted here. Er, someday? Maybe?) might be a titch fashion-forward for a turn-of-the-century working class outfit. Not necessarily, and the 1790s/ 1800s have an incredibly wide range of stay types (some of them are pretty wacky combinations of conical 18thc and more "natural" early 19th, actually), but it's certainly not as if the clock hit midnight on January 1, 1800, and every woman ditched her more conical stays for the new version with bust gussets!

Plus...I actually like making stays, believe it or not, so I was more than happy to have an excuse to try out a new variation! (Later 19th-century corsets are a different story...) Not to mention the different types of boning mentioned in Patterns of Fashion 5. There are more options than just whalebone, especially for "provincial" stays; PoF mentions both bents and wood, for instance. I've used German plastic whalebone and plastic cable ties for stays (and an ill-fated experiment with cane), but I thought it might be fun to branch out a bit...

I have a pretty decent assortment of books with patterns for stays dated to the 1790s; I decided to base this pair on one that's patterned in Regency Women's Dress, partly because they're pretty basic and just a shorter version of earlier stays (no tabs), and partly because it's one of the books I added to my collection during 2020, so it was a fun new resource for me!

My stays ended up being much more "inspired by" than truly based on that pair - this is a running theme with me. For a few reasons, but mainly because the original wearer was neither my shape nor my size! Rather than scale the pattern up and try to deal with that, I just pulled out my 1770s stays pattern pieces and redrew seam lines and futzed til I had something that looked similar. 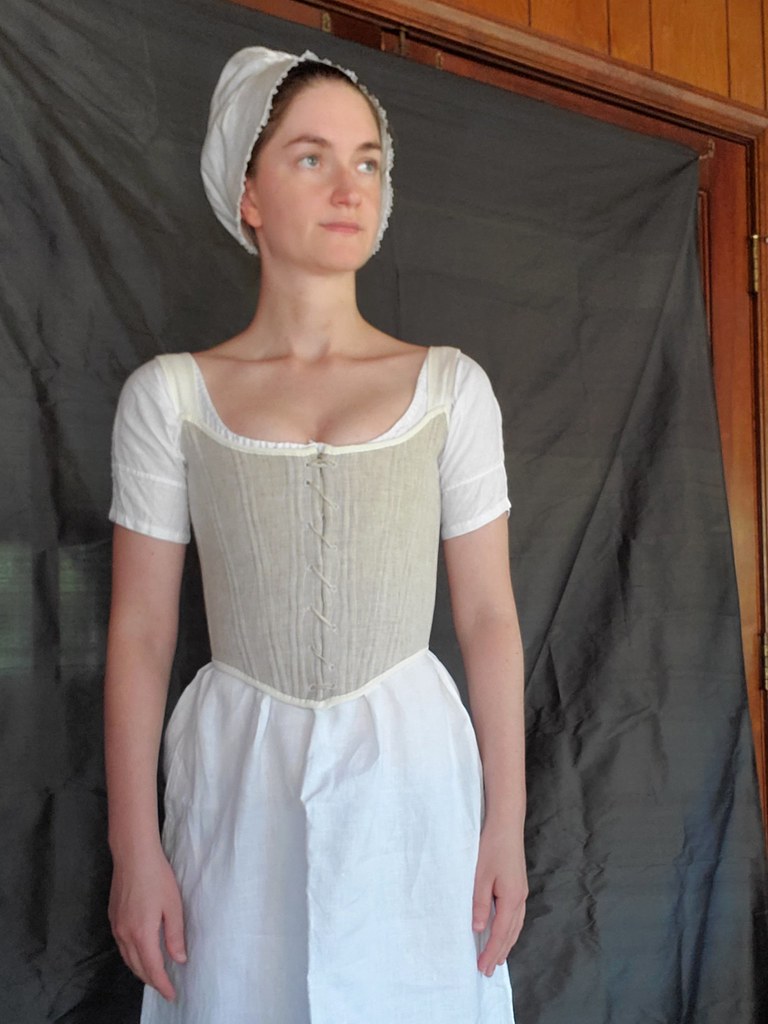 Worked pretty well for fit, but it did mean that I ended up with stays that I think are longer at CF than that original. It's hard to be sure, because the stays aren't shown mounted, just a little line drawing, but they seem to be at mid-ribcage length, above the natural waist. Mine do reach the natural waist at CF. I very briefly contemplated unpicking the binding, cutting, and rebinding, but...that seemed like too much trouble, upon reflection! It won't really matter for the dress. Plus I'm long-waisted, so my "full length" stays can be a full 2" longer (at least!) before they hit my side hip. (It's interesting trying to balance proportions in eras that are meant to be slightly short-waisted but not full-on above the waist, like 1780s; if I cut to my waist the bodices look "off"!) 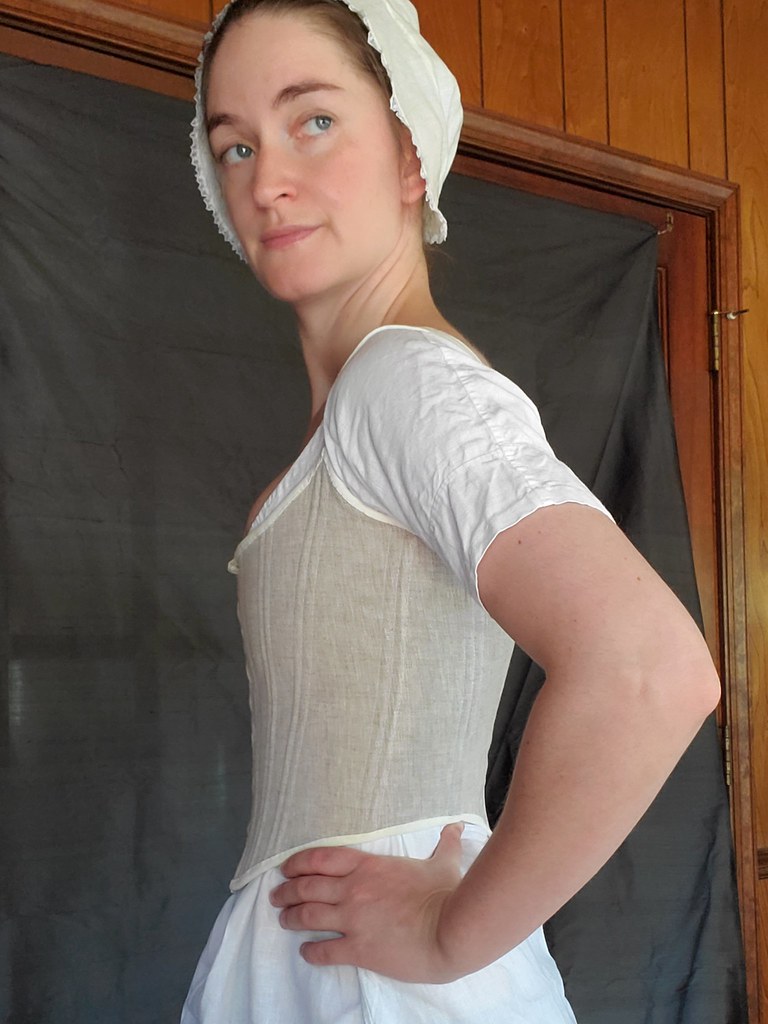 I constructed my stays a bit differently than the original pair, as well. Those are two layers of linen, and it's boned with baleen (I believe). I had a scrap of herringbone-weave natural linen I wanted to use for the outside, but it was too lightweight to hold poky boning on its own, so I used the herringbone linen on the outside, and then two layers of midweight white linen to sandwich the boning. Used another white linen scrap for the shoulder straps, as there wasn't enough of the herringbone - it was a small scrap! 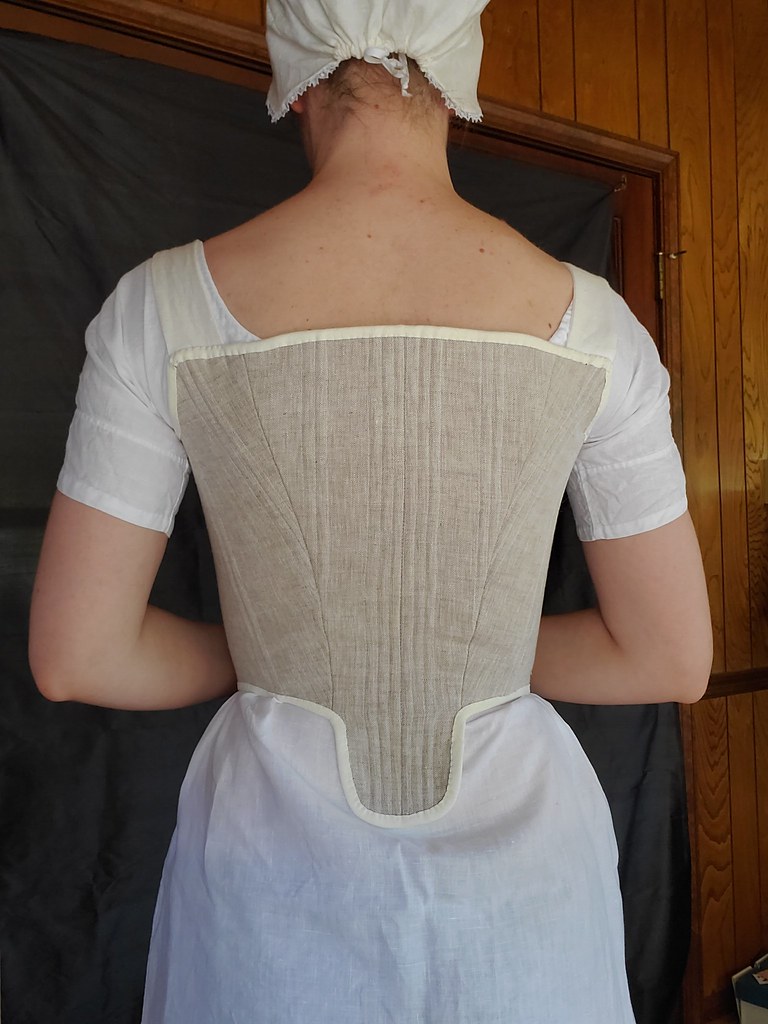 The channels for the boning are machine-sewn, and the rest of the sewing is done by hand. I really enjoy hand sewing, but I've never yet been inspired to 100% hand sew a pair of stays. Someday I'd like to make a really nice mid-century all-hand-sewn pair out of silk brocade...but that's not this pair! Machine sewn channels with the rest done by hand is my usual M.O.

A few shots from the first fitting - pretty good, considering the unorthodox "drafting", lol. This is where I had left them from March to this past Monday... 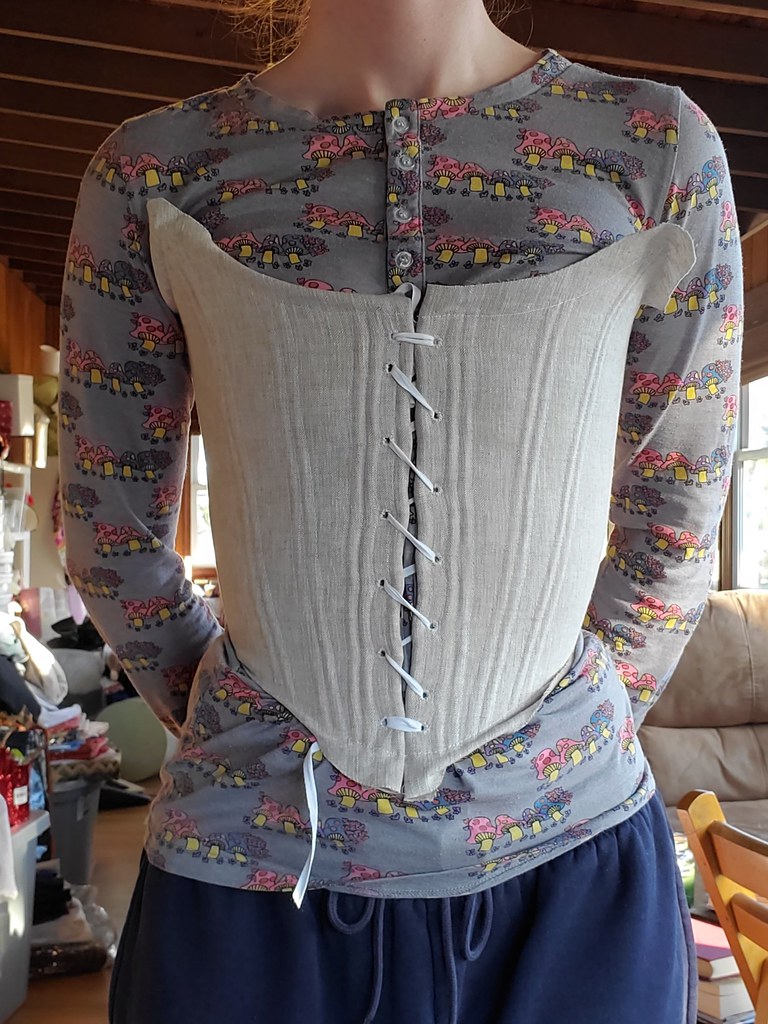 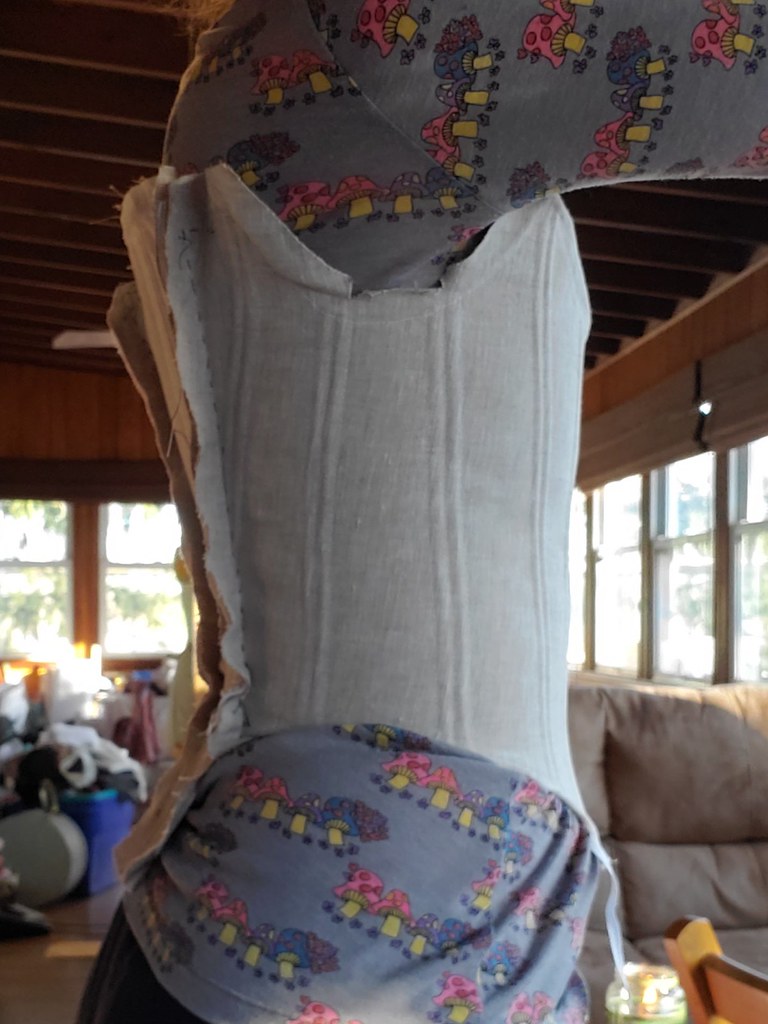 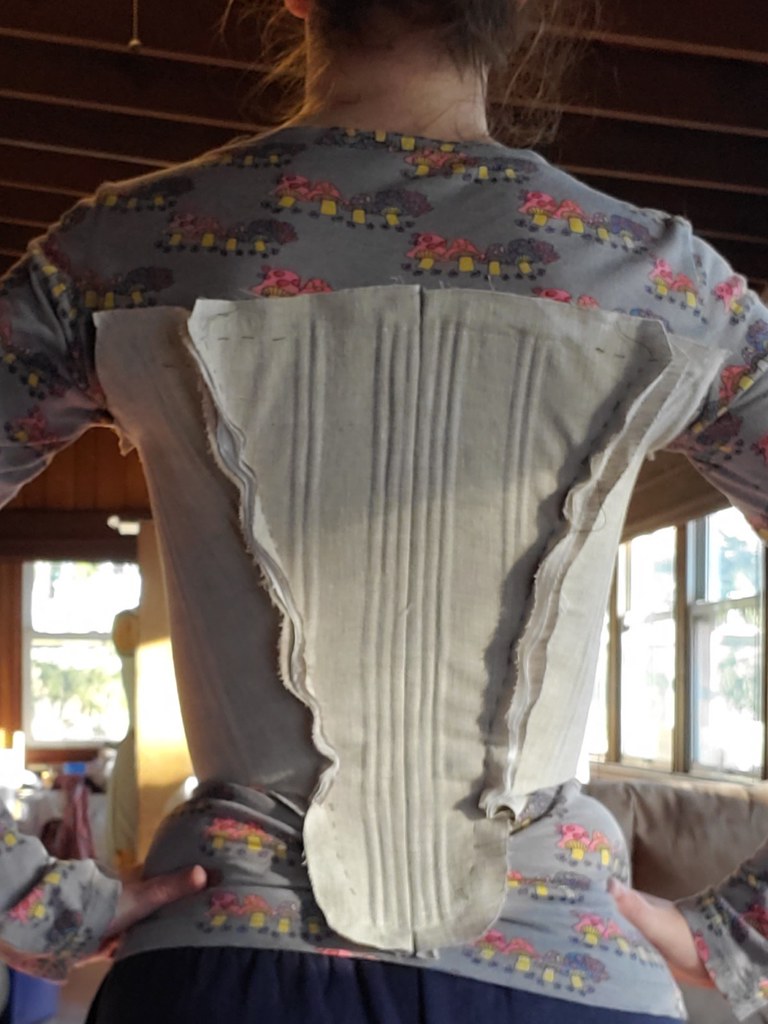 I bound the stays fully with strips of chamois leather; the original used leather on the bottom edge and in the armscye (the linen layers are just turned towards each other on the rest of the top edge), but I've used chamois on other stays and liked it, plus binding the whole thing was just easier! Minus the shoulder straps - those were sewn separately and stitched on after the stays were otherwise complete. Rather than stitch the leather strip and turn it over the edge to get that nice narrow edge (as seen here in Katherine's tutorial), I just sewed the binding over the edge in one go. Clunkier-looking, but easier - doable in one pass of stitching rather than two...and I want them to look a little clunkier, as a not-professionally-made pair of working-class stays probably would have! The original pair aren't particularly finely made, either.

FYI it's SO MUCH EASIER to bind stays without tabs... 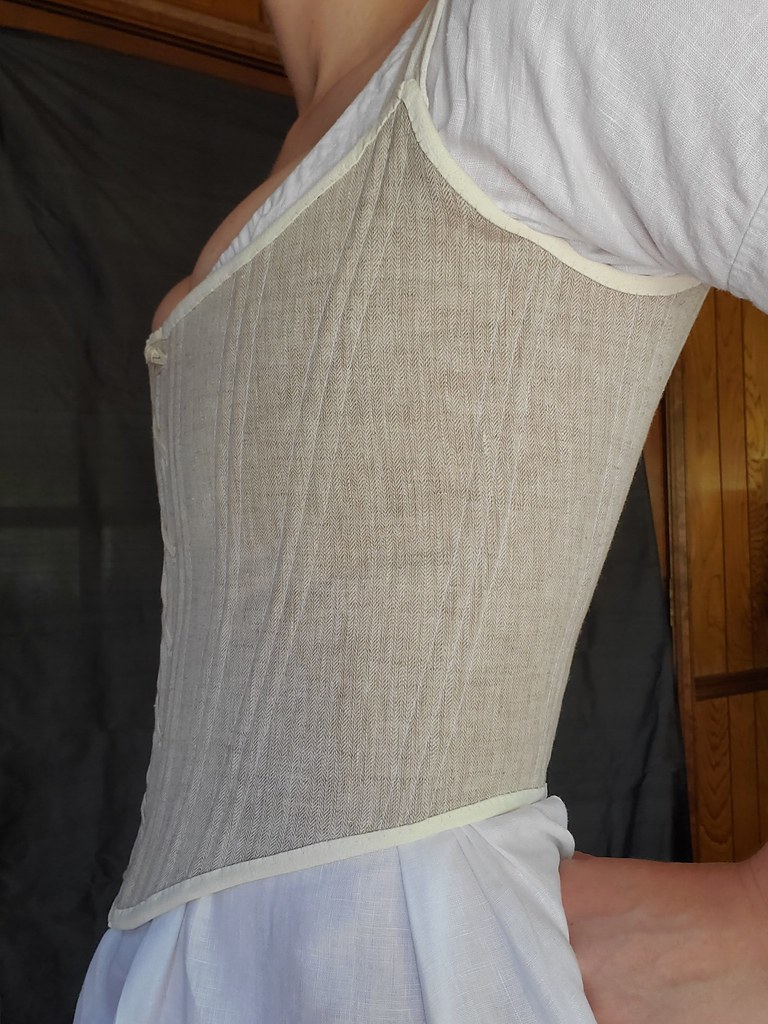 Final notable difference: boning! As I mentioned, the original pair seems to be boned with whalebone. I wanted to use some of that experimental material, though, so I chose the reed. Mostly because it didn't need any prep, just cut and shove into channels!

It's pretty poky, which reinforced my decision to bind with chamois. I suppose one could try filing the ends down, but with five reeds per channel it didn't seem like an effective use of my time when I could just bind with leather and be done.

I haven't worn them around much - just an afternoon and evening after I bound them - and right now as I write this post! - so it remains to be seen how the reeds hold up to wear. Much less likely to break than in stays with tabs, but I suspect I can still break them if I bend too extremely in a few certain directions - side back, most likely. 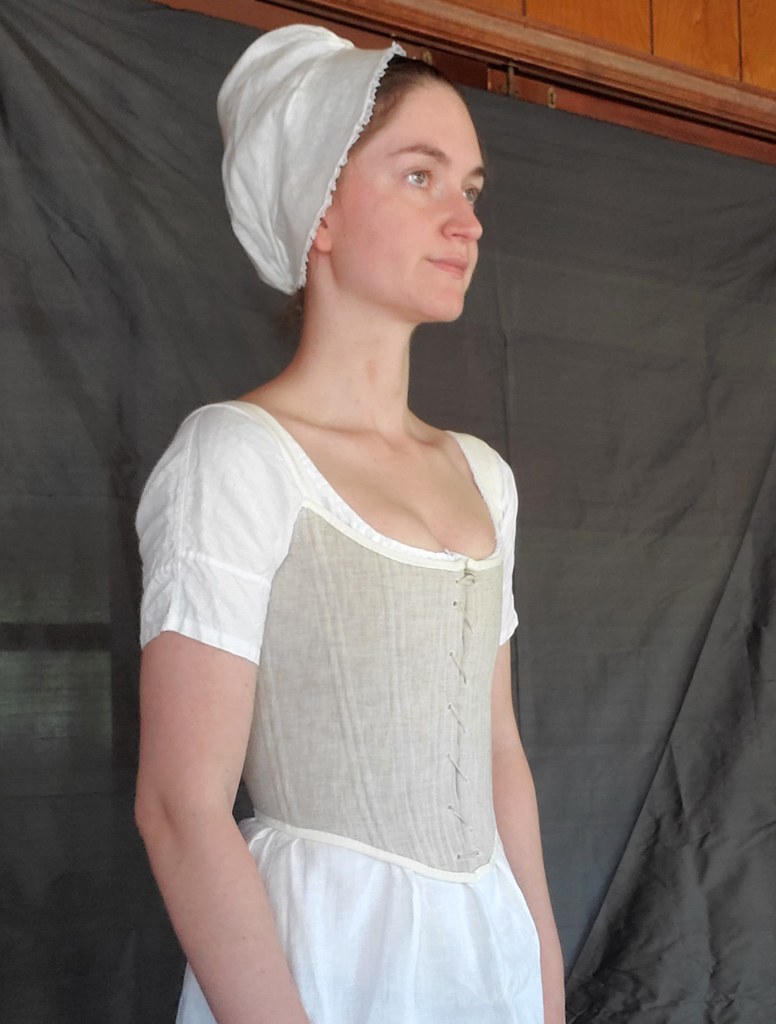 Three layers of linen and reed in half-boned stays is also softer than a whalebone substitute - in side profile you can see how that front curve isn't completely smooth, there's a small "bubble" at the bust. This will likely get more pronounced with wear. And that's entirely ok with me! 1790s move towards that softer bustline anyway, plus the whole "working wear" thing.

(I plan to see how all these materials react to wear in similar cut of stays...but that's a very long-term plan!)

They're very comfortable so far, unsurprisingly. A few layers of linen and a handful of reeds that end above the belly pooch isn't terribly constricting. Also...yes, I can raise my arms above my head! ;) 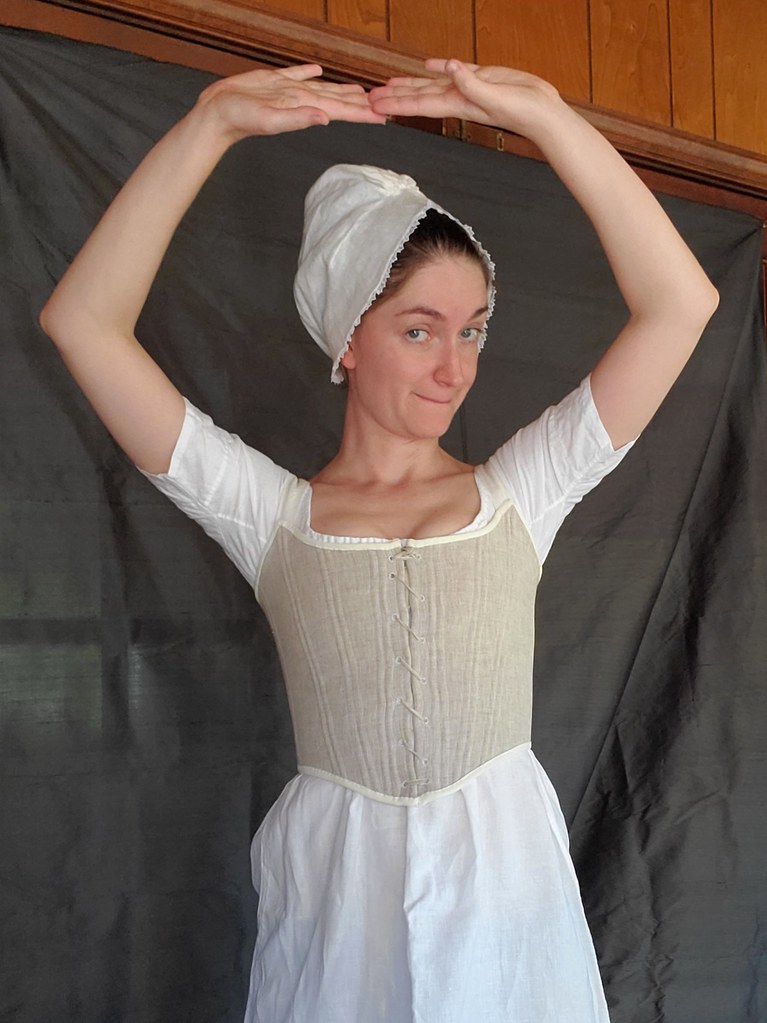 Next up: the outfit to go over this. As shown below, my 1790s petticoat fits over it just fine, so full steam ahead, while I'm still inspired to sew! (Famous last words...) 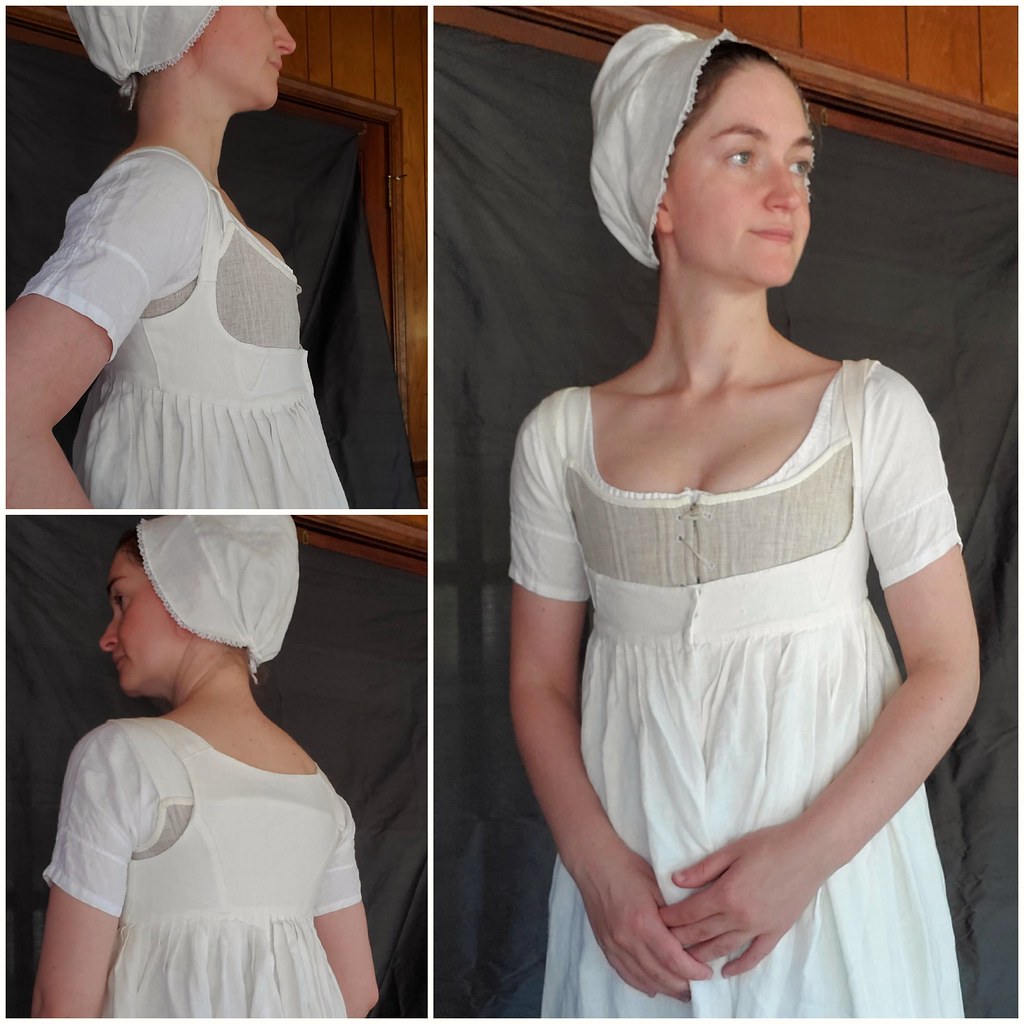