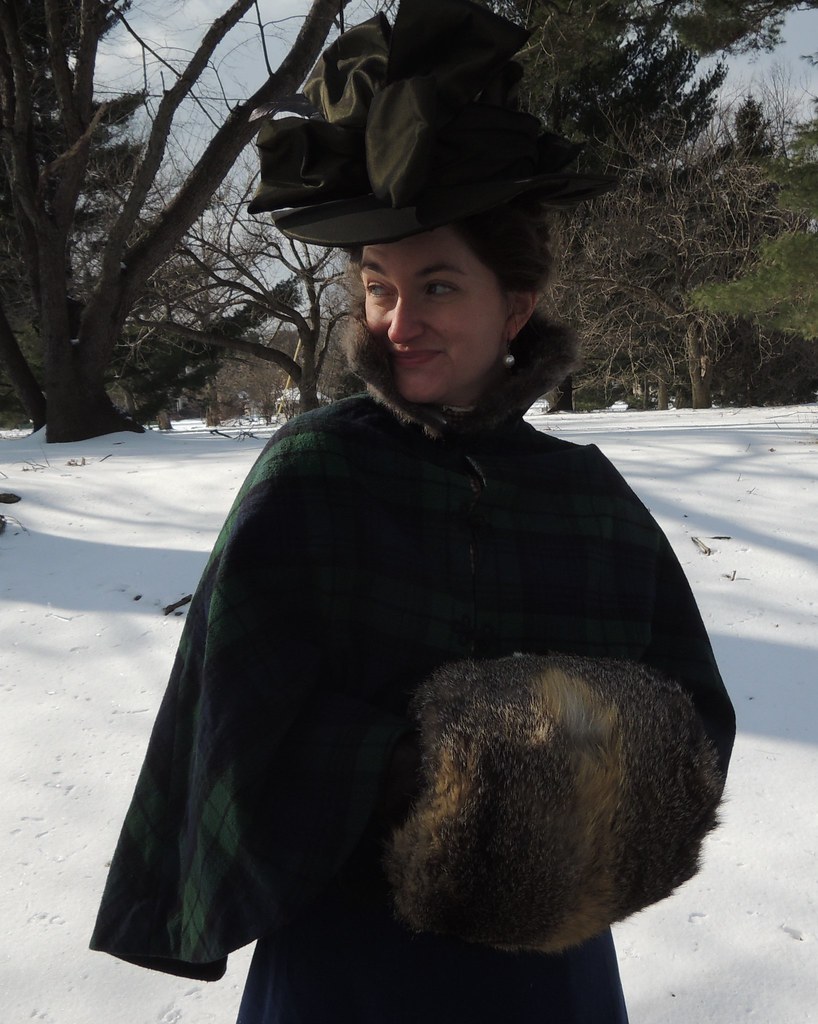 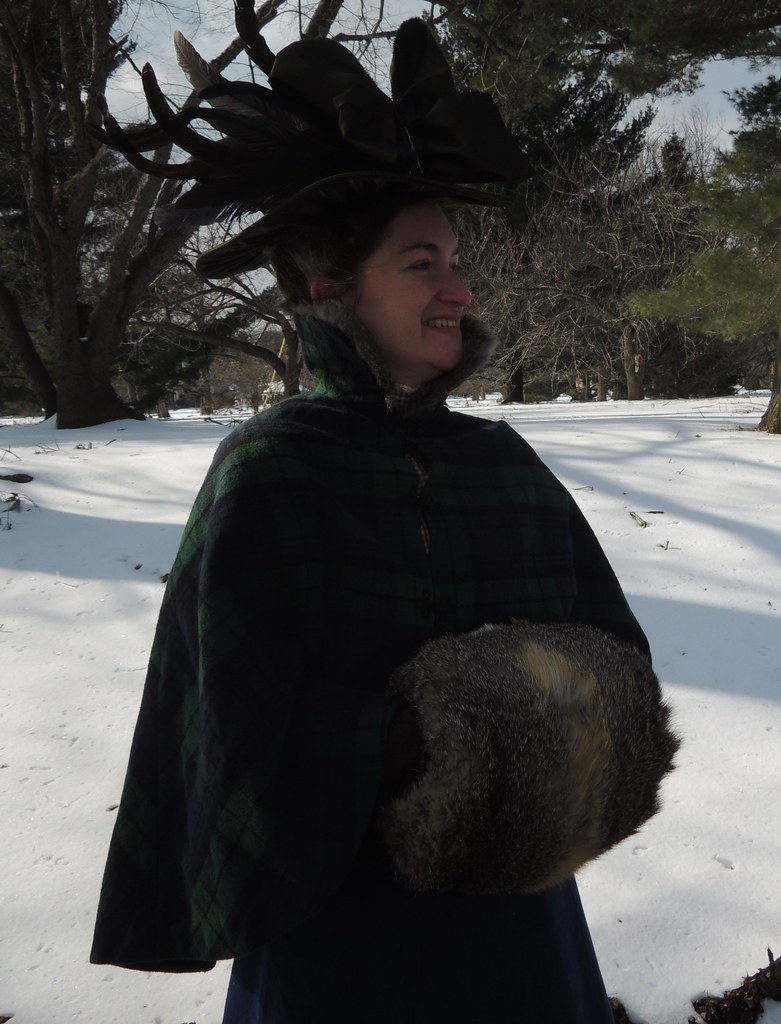 It's also a lot of hat that is really dark in a bright snow setting. Oops. Well, they're very artistic, even if you can't see as much detail as should be in a proper costume post? 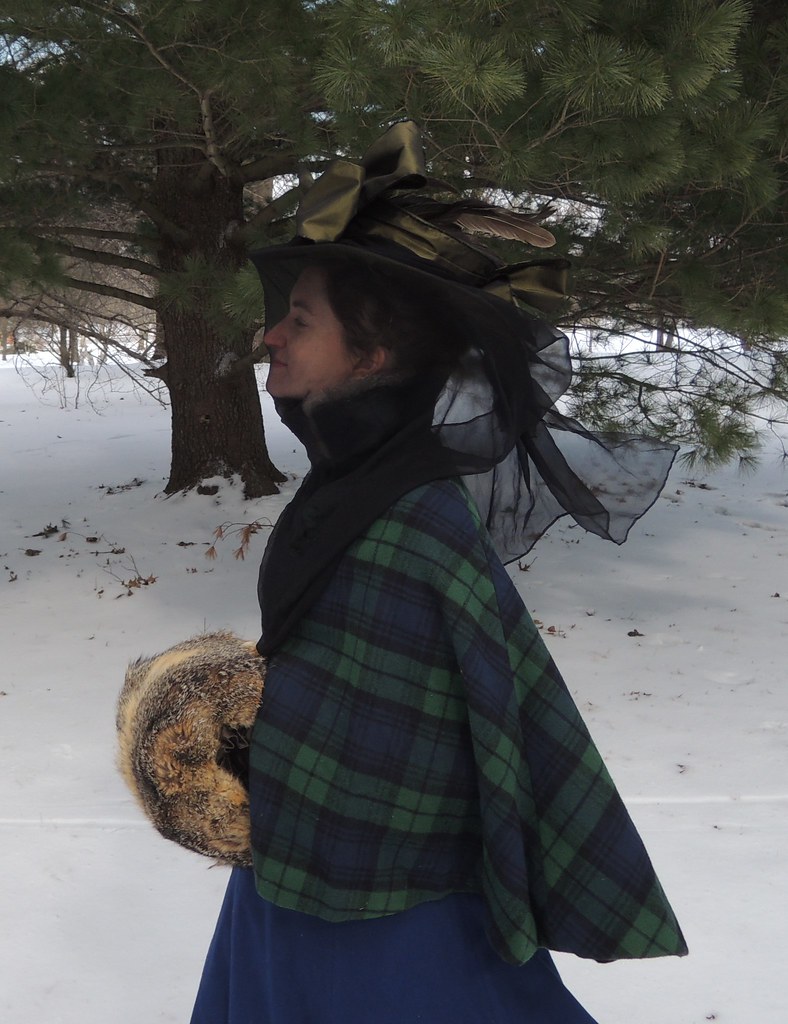 The Hat was originally intended to be part of a new turn-of-the-century outfit for a Winter Stroll with my local costume peeps, but that fell through - we've had a ton of inclement weather lately, as has much of the country. I honestly really enjoy snow, but I don't really enjoy driving in it, especially when it's not plowed - and ice is right out. (And last winter we had exactly zero appreciable snow accumulation...) 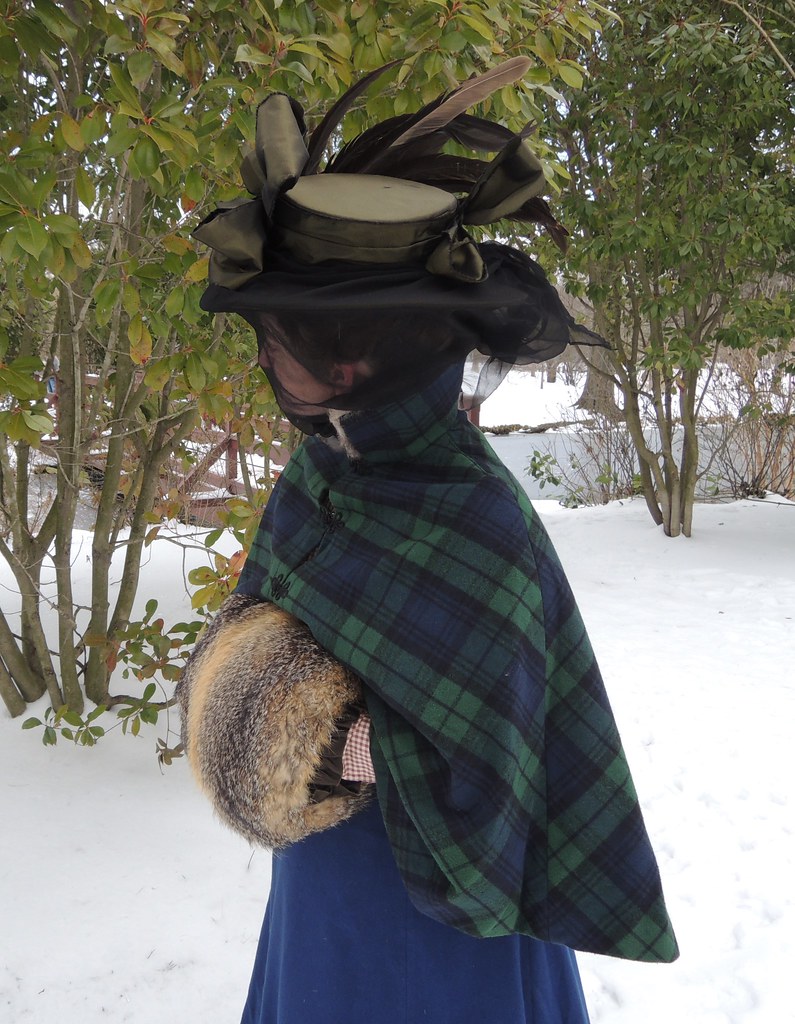 So I figured I might as well get out to a local park and get some pretty costume-snow-pictures while it was there and I had time! It was still pretty cold - just above freezing, with a bit of a wind, as you can see in pictures! I was perfectly happy tromping around the park for the better part of two hours, though. You wouldn't think a silly little gauze veil would do much for warmth, but it's in fact fairly insulating! My ears weren't warm, but they didn't get cold til the very end of the tromp. Not to mention the fur-lined collar that goes right up to the bottom of my ears...those collars are fab. 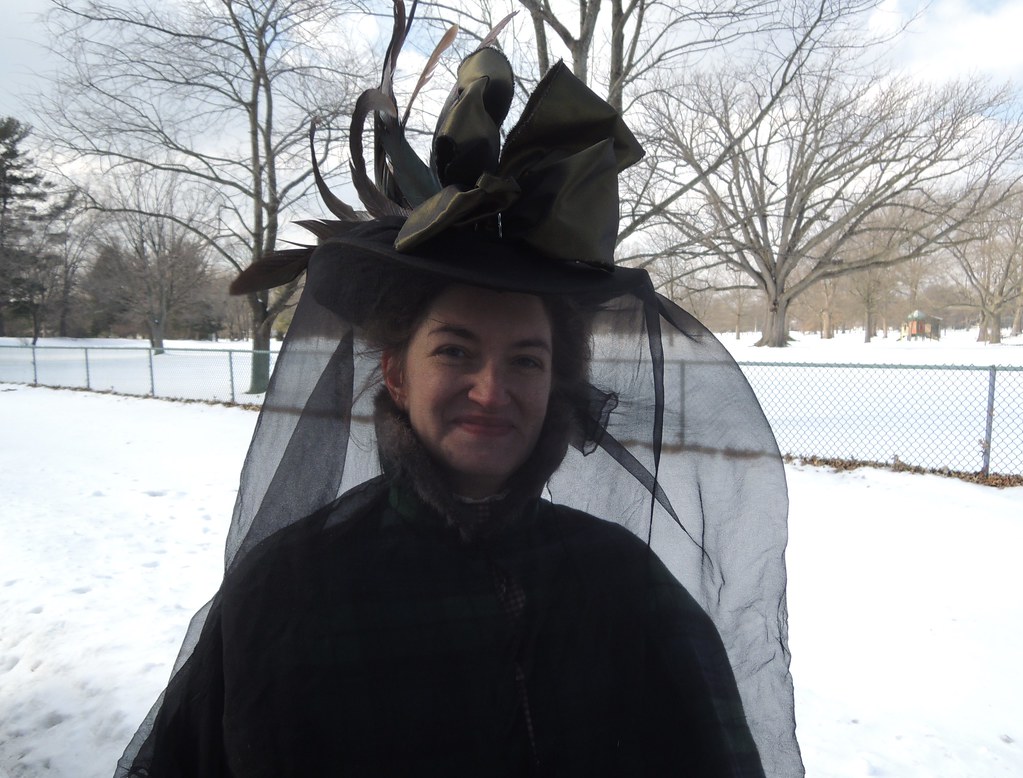 The hat's the only new thing - the rest of it is my old ice-skating outfit that I made four? years ago for My Birthday Excursion (hence the rather short skirt. Great length for snow tromping! Hardly got wet at all). Veil is even older than that...one year I decided I wanted a bonnet veil for Gettysburg (2015?), and so went to the trouble of hemming a big rectangle of silk gauze (absolute misery, gauze is horrible stuff to sew). It's definitely come in useful on occasions since! 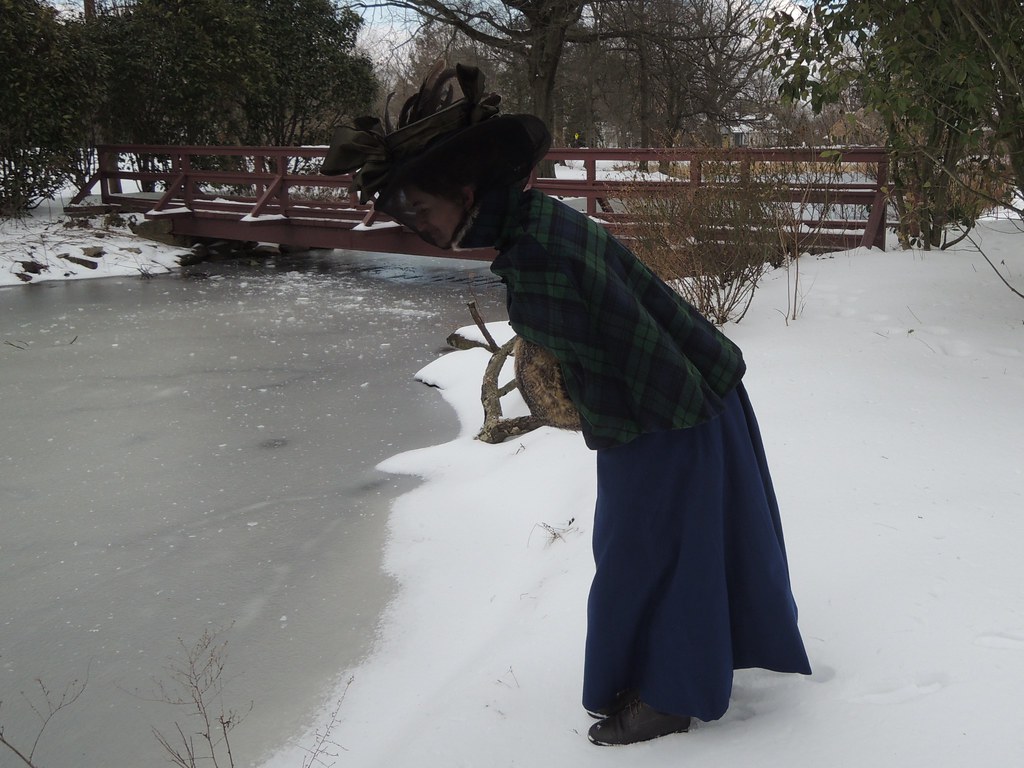 I used the Lynn McMasters "La Belle Epoque" hat pattern, which can be found on this page. I used view C, with a slightly higher crown, and ignored most of the construction directions, as per usual...there's a ton of ways to make and cover buckram forms, and I've found a way that works well for me. As long as the pattern pieces fit together, that's all I need!

It's a doubled layer of heavyweight buckram with a wired brim - fairly standard for most of my hats. I've found that single-layer buckram hats tend to warp on me, especially when they get up to this size. Could also just be that my natural environment of the mid-Atlantic East Coast has a natural propensity to humidity and hat-warping... your mileage may vary!

I used SilkBaron's "Poisonwood" taffeta to cover and trim the hat - as always, their silk's a joy to work with. (Not a shill, just a perpetually happy customer!) The feathers (natural rooster tail) were in the millinery drawer so they could be from a handful of websites - likely from FeatherPlace or Continental Feathers, though, as they're my go-to for feathery things. 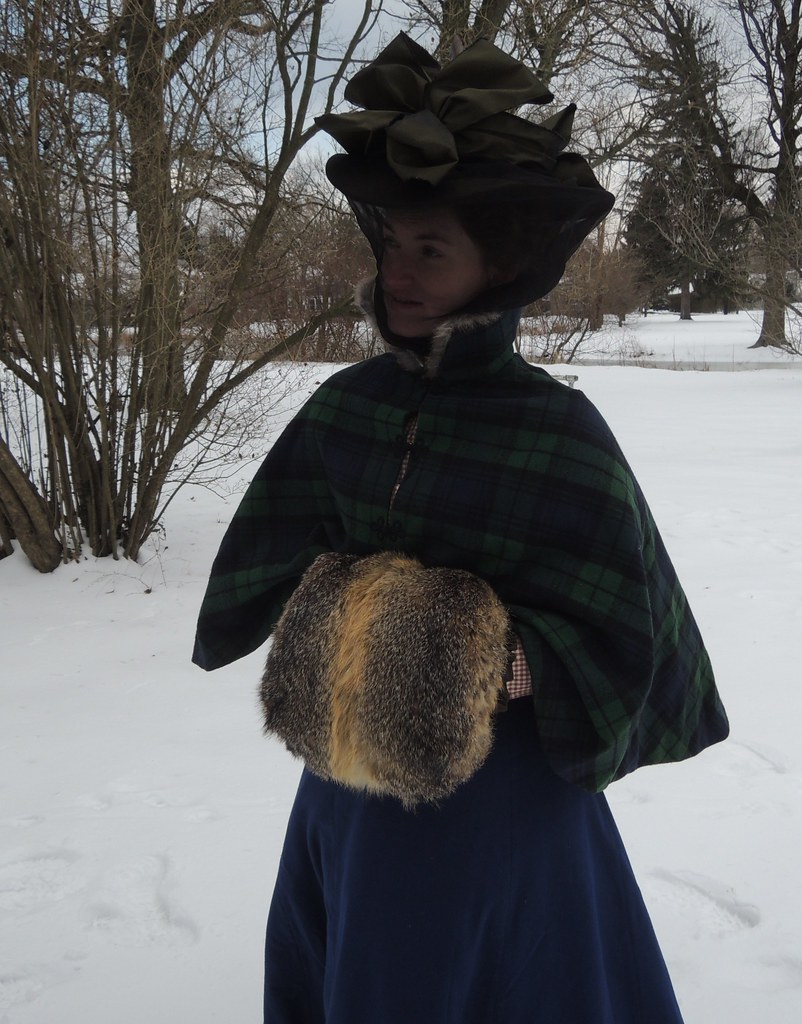 The front-bow-puff-things on the hat are solidly attached, but they got a bit flattened in head-on wind... 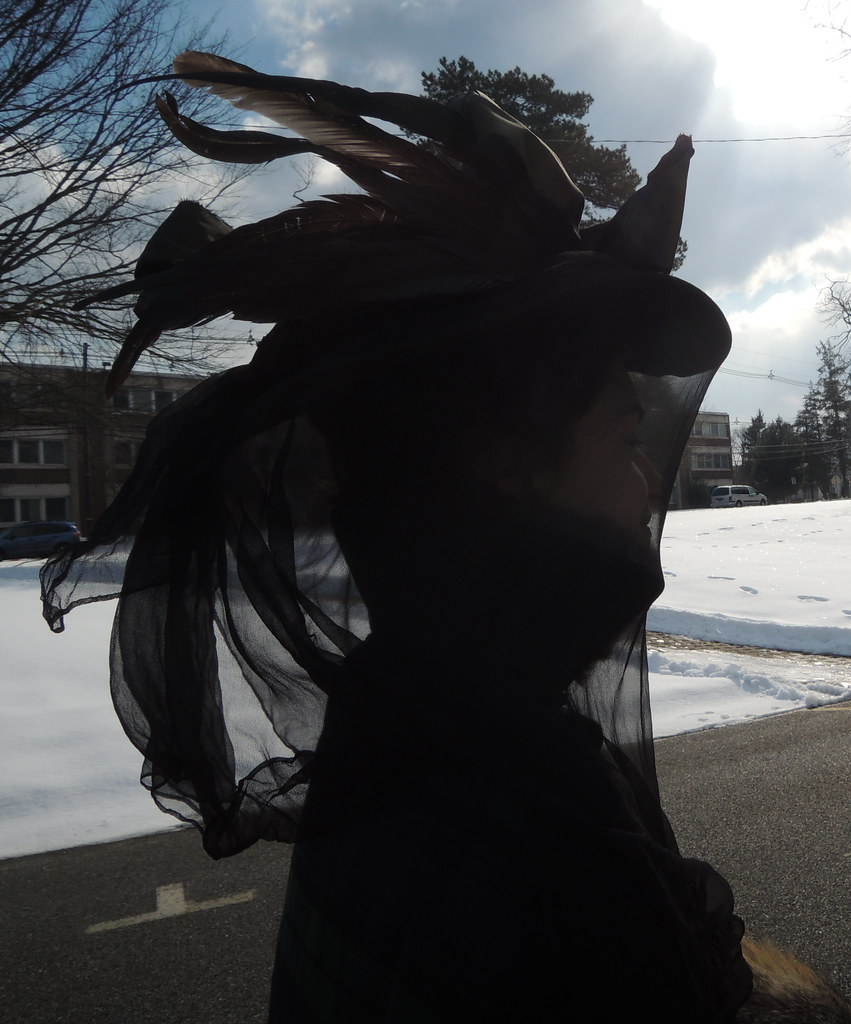 This silhouette is just...a LOT OF HAT. It's surprisingly well-anchored for the size and tilt...

Potentially less-exciting but more-visible-detail shots from when I first finished the hat and plonked it on my head are in this IG post. 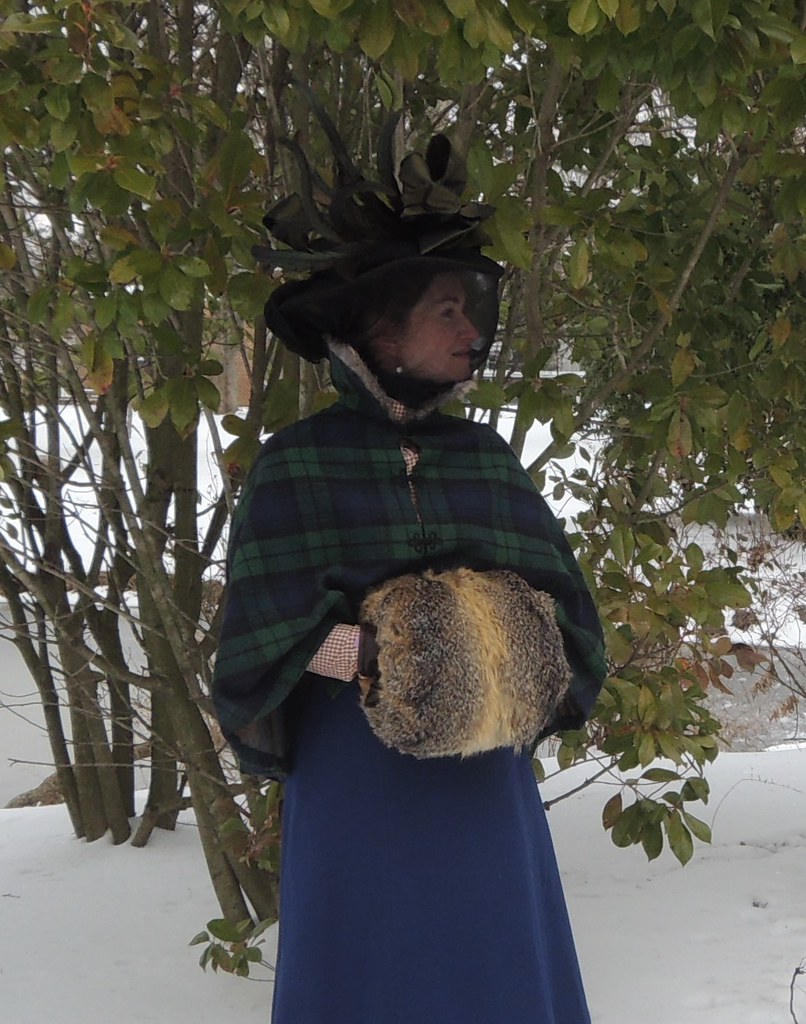 Feathers standing straight up like I've stuck my finger in a light socket...ZAP!

I've gotten worse and worse at documenting in-progress photos, because I'm quite sure that 98% of people only care about the finished product and not the ugly messy construction part...but I did take a few construction pics for Instagram - they can be seen here (part 1) and here (part 2). 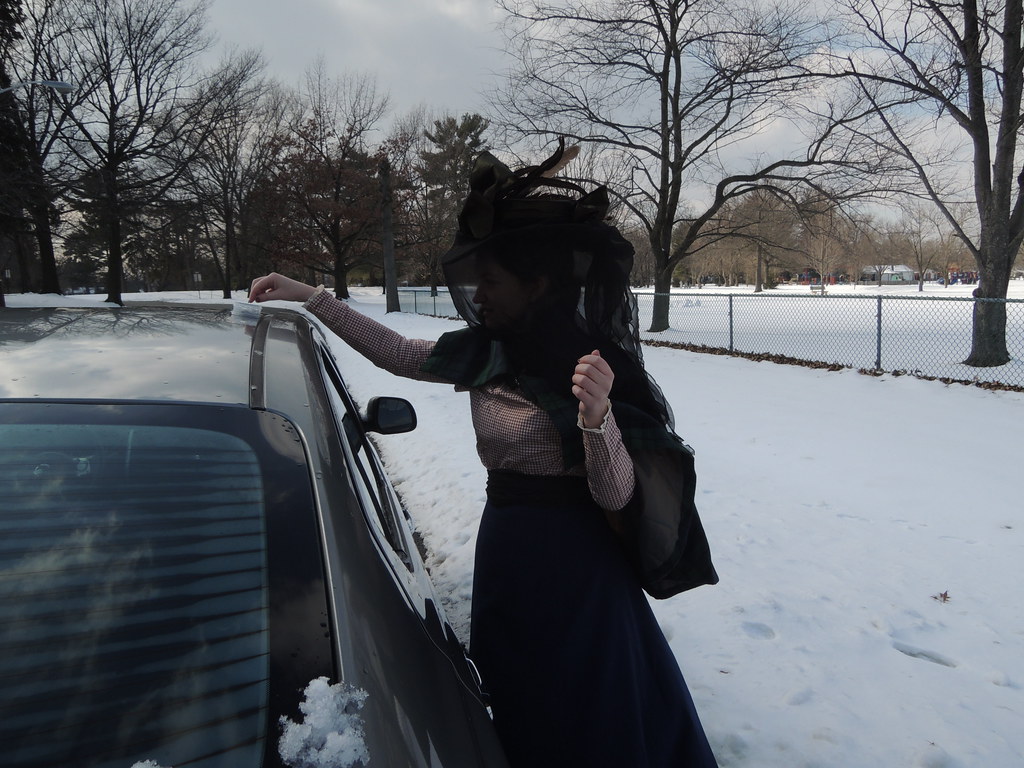 Behind the scenes: Using the car window as a mirror to pin the veil on in a, shall we say, stiff breeze! 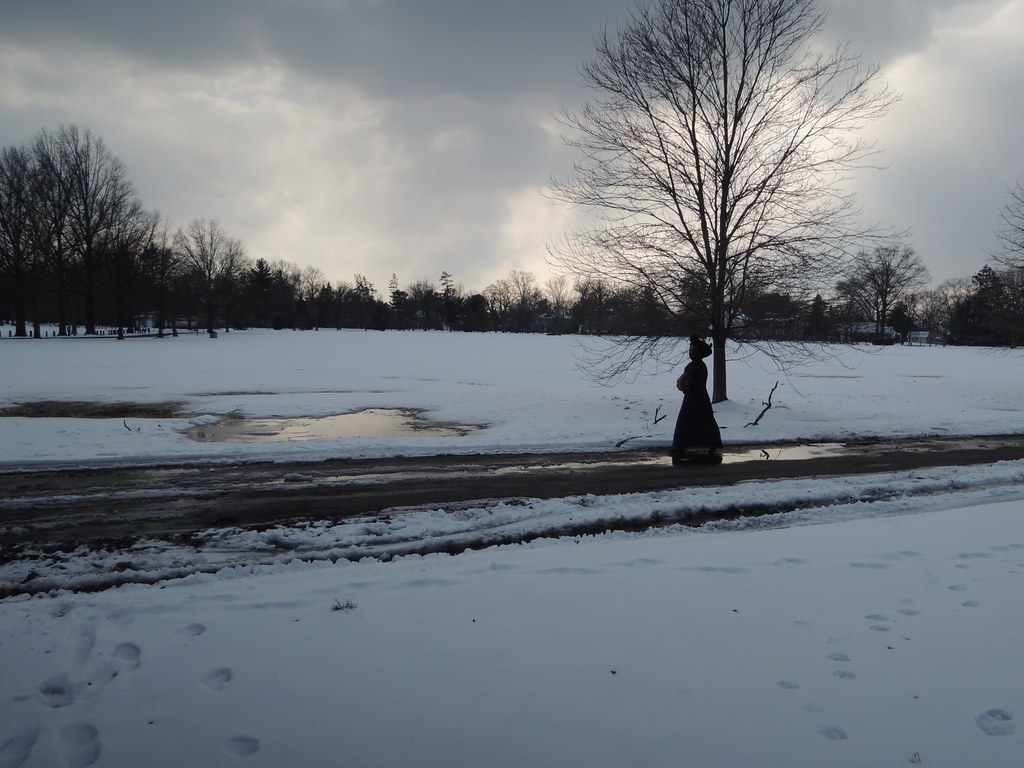 Looks cold out there! I do love the muted winter light - even if it's bad for hat pics. 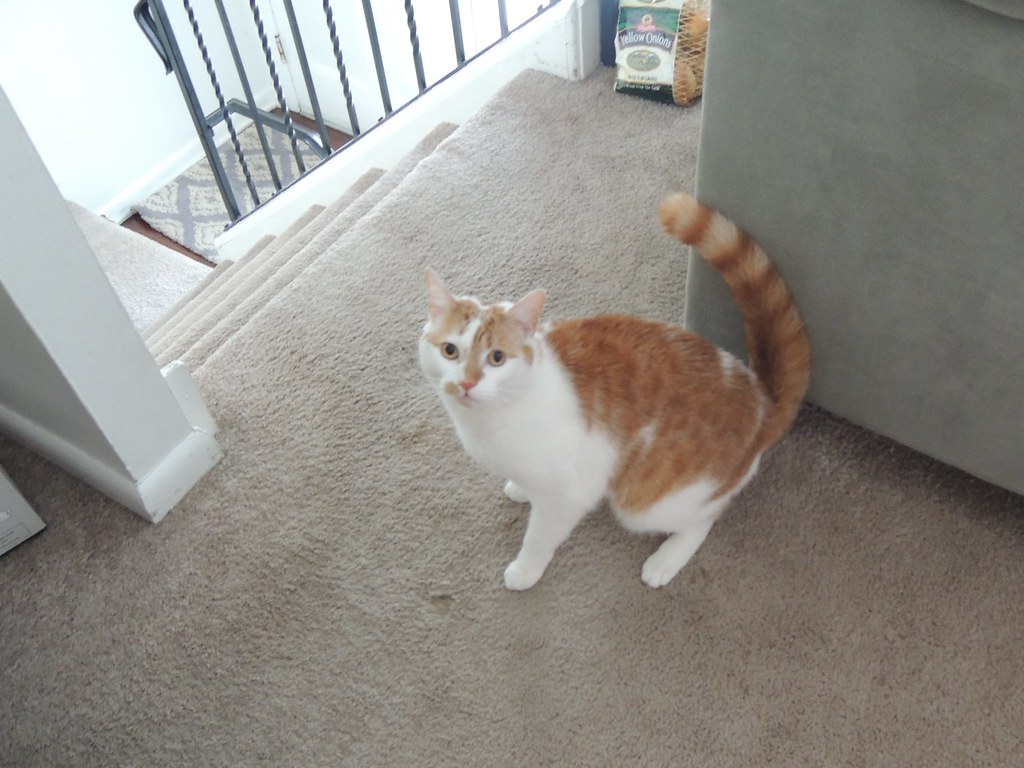 Poor stupid Pip was absolutely terrified of me in a nondescript wool flannel skirt, for reasons unfathomable. The hat wasn't even involved! He attacks the inside of my 1860s cage crinoline with impunity, but is afraid of an A-line skirt? Okay, furry potato. 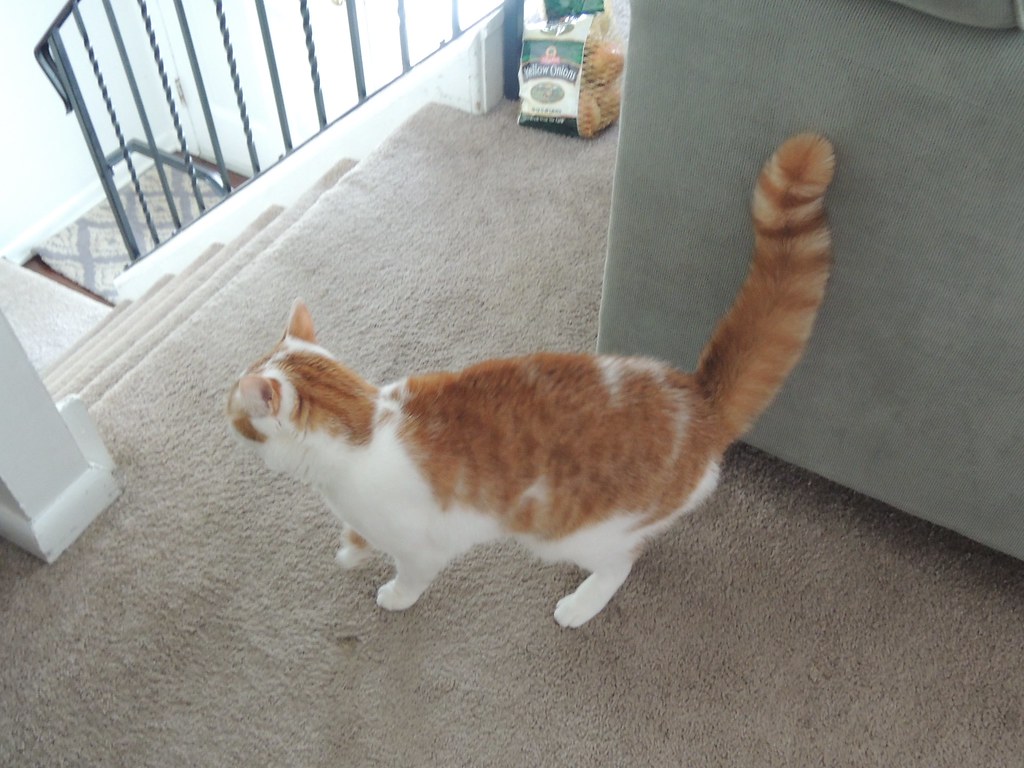 Look at that TAIL. I cannot handle it. 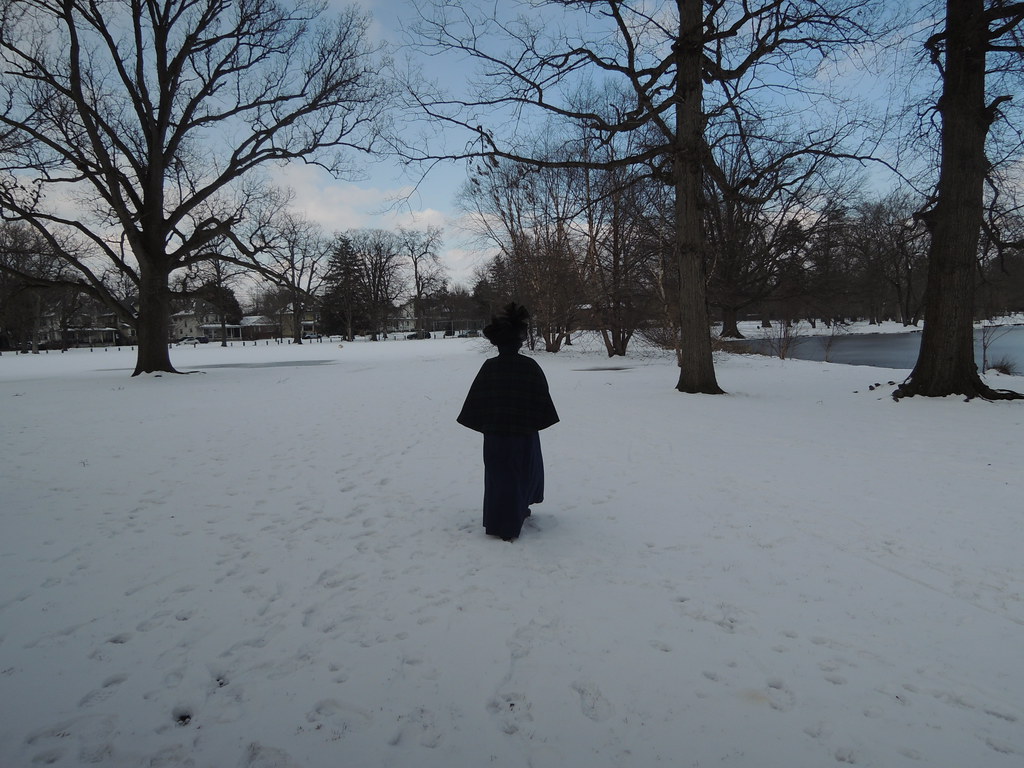 Trompin'. One can tromp in the 1890s, believe it or not! Corset notwithstanding. 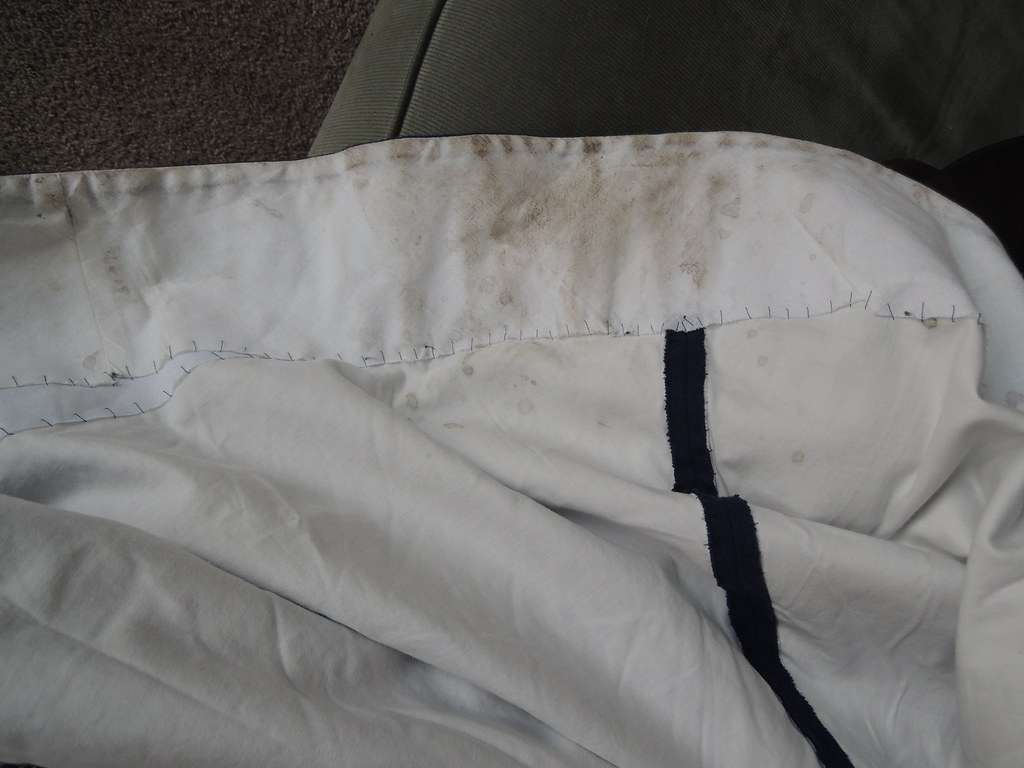 Okay...a little bit of mud on the facing! But really not bad at all, I've gotten much muddier on other occasions, and this is an old skirt. 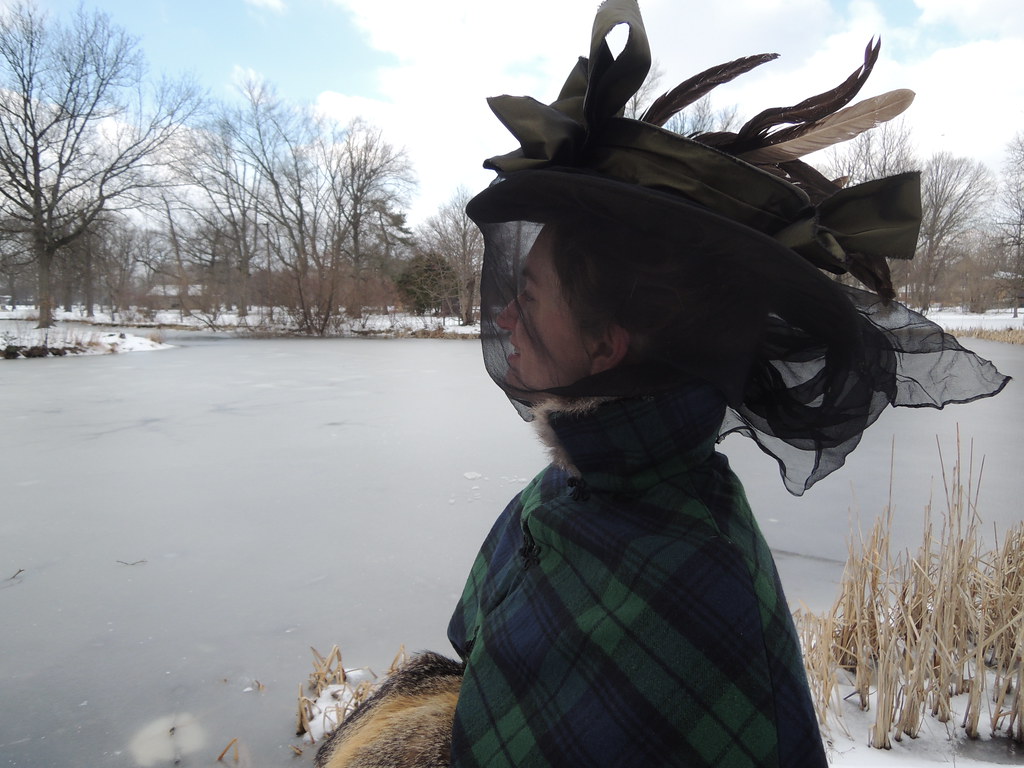 Still a lot of hat.