New Sleeves and a Poe Picnic

A couple of weeks ago, the extended version of the Usual Suspects got together for a Poe-themed picnic/outing at Valley Forge; Washington Memorial Chapel is an early-20thc church with really pretty "Gothic" architecture with little cloisters on one side, so, perfect for a Poe-esque setting! It was the first costume outing we've had since March, and we all enjoyed ourselves immensely. Gorgeous fall weather, and it's a VERY large park so despite the lots of people who had the same idea we did (spending the afternoon out-of-doors, not dressing in funny clothes), there was plenty of space for everyone to maintain a reasonable distance and not have too many dog-walkers in the background of our photos! 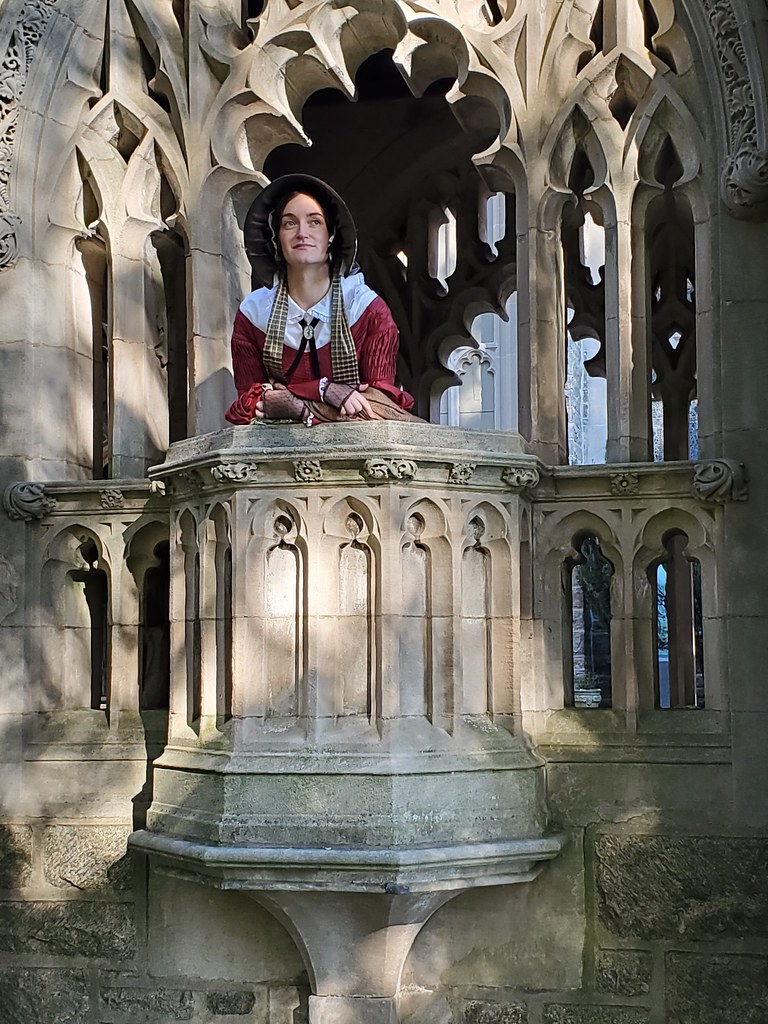 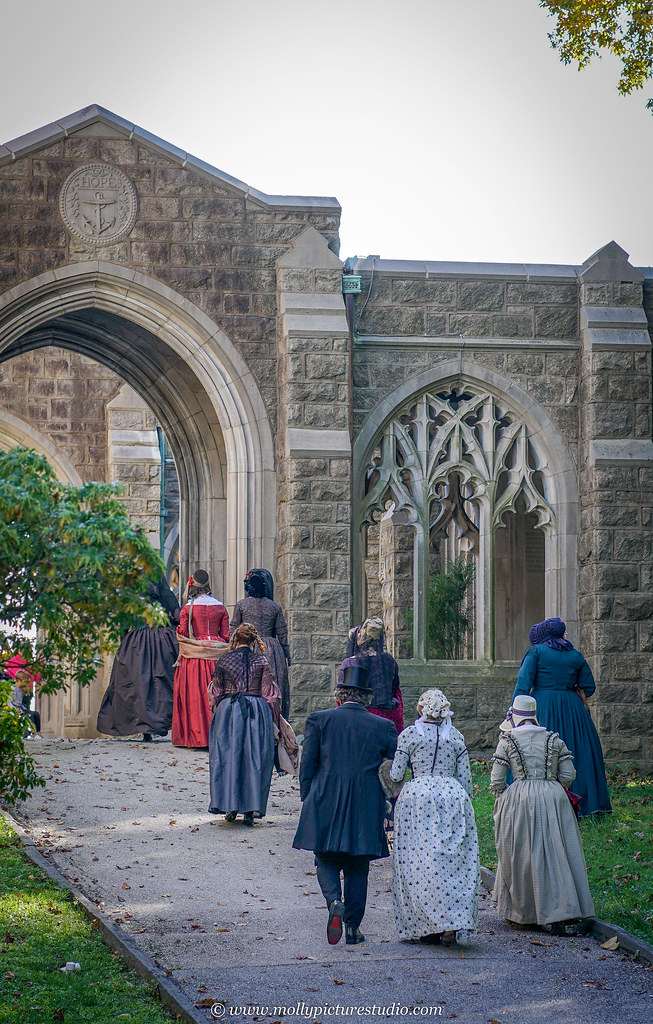 I originally wanted to make a new mid-1840s dress, from Patterns of Fashion 1, out of some appropriately-dark-and-spooky plum-colored silk taffeta...but I spend a lot of time working these days, so by mid-September realized that a new dress was not likely to happen! Ok, so I don't have any other strictly 1840s dresses, but I have a couple of late 1830s dresses that won't stick out too badly - and I've been intending to make long sleeves for my 1838-40 "Christmas" ballgown ever since I realized I had enough red silk left over from making the dress!

Decided that the red silk was a better Poe option than the cream poplin, and tootled off to Pinterest accordingly to make sure long detachable sleeves in this period weren't just a figment of my imagination. 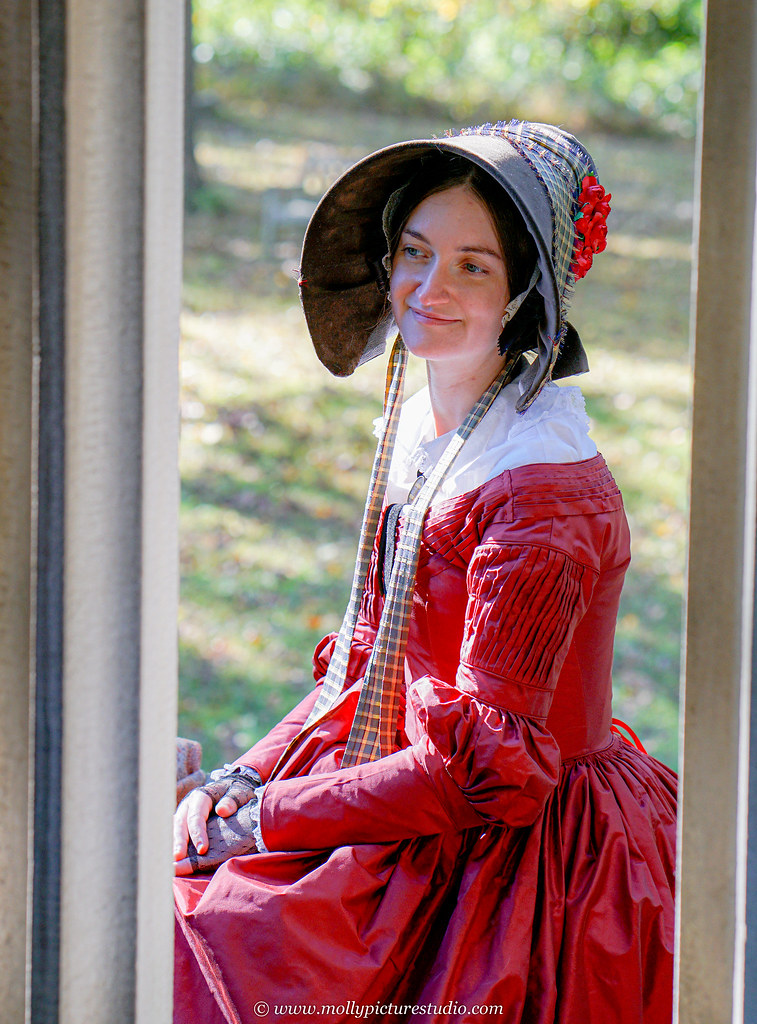 In fact they are not! Excellent. Olive green dress from the Met here, and a dress from FIT (long and short sleeves).

Those are the only two I've got evidence of, but my pet theory is that they were much more common during the post-big-sleeve-collapse years (late 30s into mid 40s) than the number of surviving examples would suggest. Considering the cost of fabric, why not make your evening dress wearable for day as well? Plus the sleeve styles of the period especially lend themselves to detachable lower sleeves: the upper arm still has some kind of embellishment or frou-frou left over from the demise of the big sleeve (they got strapped down on the upper arm before they vanished entirely) paired with an increasingly slim sleeve as you go through the 40s. I would venture a guess that some of the surviving "ball gown" examples in museums had lower sleeves that they were parted from at some point in their almost-200-year history! Very easy to lose a pair of lower sleeves if they aren't attached...And I would even go so far as to guess that there are a few long-sleeved, low-necked dresses of that particular sleeve style that are actually two-parters that remained stitched together (although that's a longer shot)! Check out this excellent Pinterest board with a survey of extant dresses from the era to see what I mean.

Anywho, whether they were really common or not, they existed, so I was good to go. I had about 3/4 yd. total left over, counting scraps, from making the ballgown, which I figured was plenty. I waffled between elbow puffs or plain straight lower sleeve - I already have the cream poplin which has elbow puffs, but more embellishment will better hide the fact that they're detachable sleeves, plus puffs are just more fun... 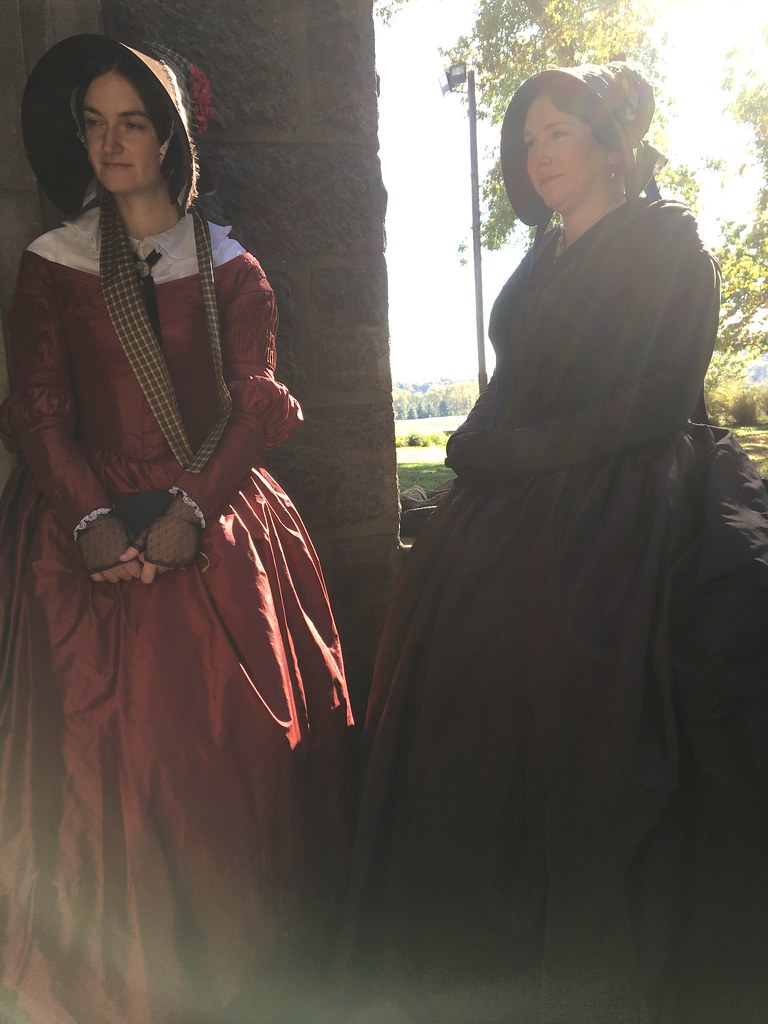 Clearly I decided to go with puffs! 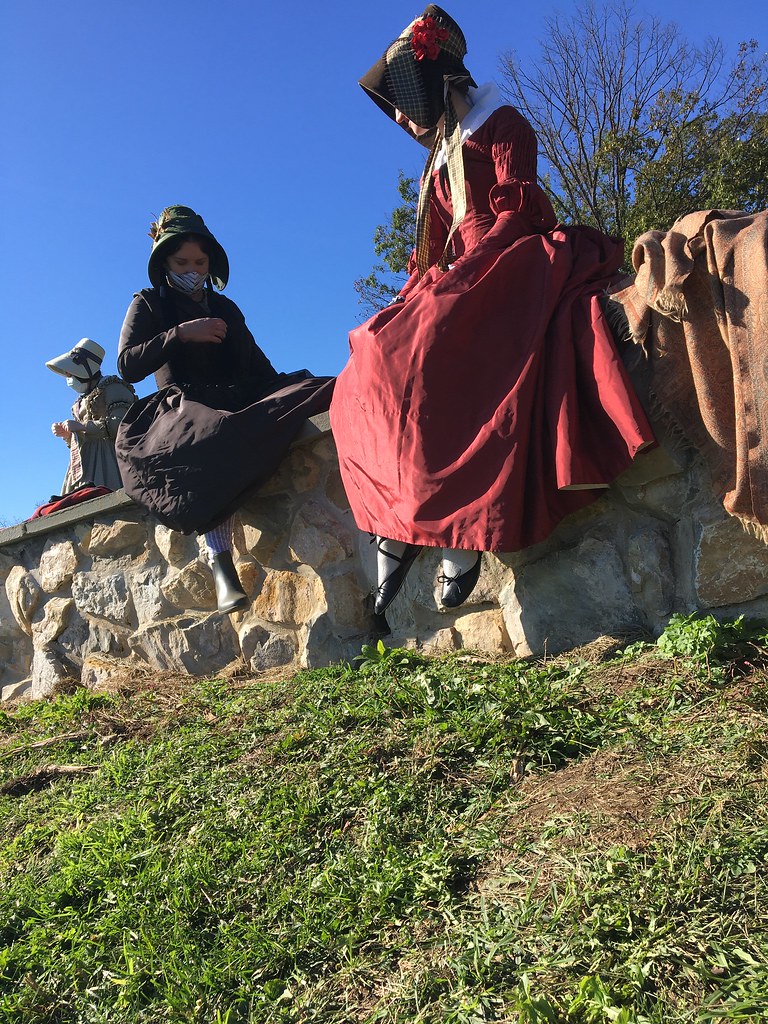 Construction was my usual non-scientific method...I fitted a mockup of the plain sleeve and cut the lining pieces from the mockup, then cut out the "gauntlets" to fit the lining, then pleated up a rectangle of fabric and sewed it down into the upper part of the sleeve, covering it in a piped strip, so that when it was tacked in, it would look like the puff was held down by two piped bands.

To make the whole thing extra day-wear-y, I took off the lace from the neckline and wore a chemisette - I've seen 1840s photos with low open necklines on obvious daywear, but this was for an outdoor October event, so chemisette seemed the better option! I also put  a new black ribbon on my net cap, and added ribbons to a pair of flats that I bought several years ago that had stupid elastic heels and therefore would never stay on (can report that adding ribbons helped immensely). I wore a black velvet ribbon around my neck, pinned it into place (which, btw, kept stabbing me in the collarbone area all day) and added one of my antique brooches to finish it off. 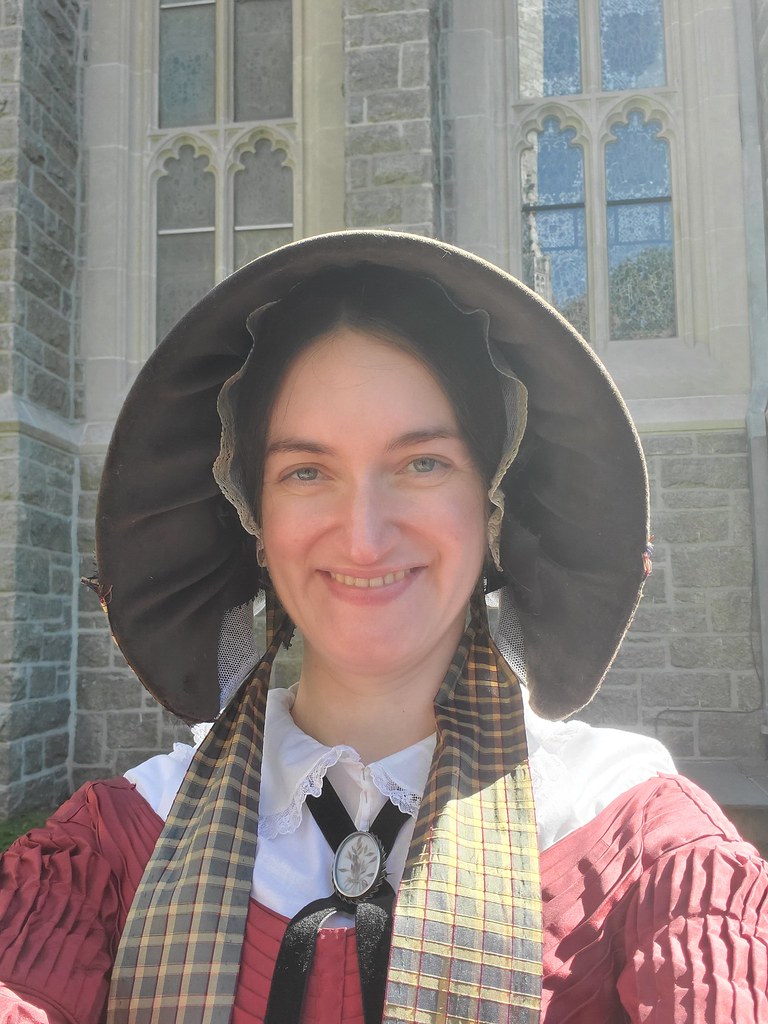 I also got a bee in my bonnet (o ho ho) to make new bonnets, so I made one for me and one for my bestie - Robin of SewLoud. Both are from Timely Tresses patterns - mine is the Lydia Alma and hers is the Lavinia Ruth - mine in brown velveteen and hers in changeable navy/green silk taffeta. 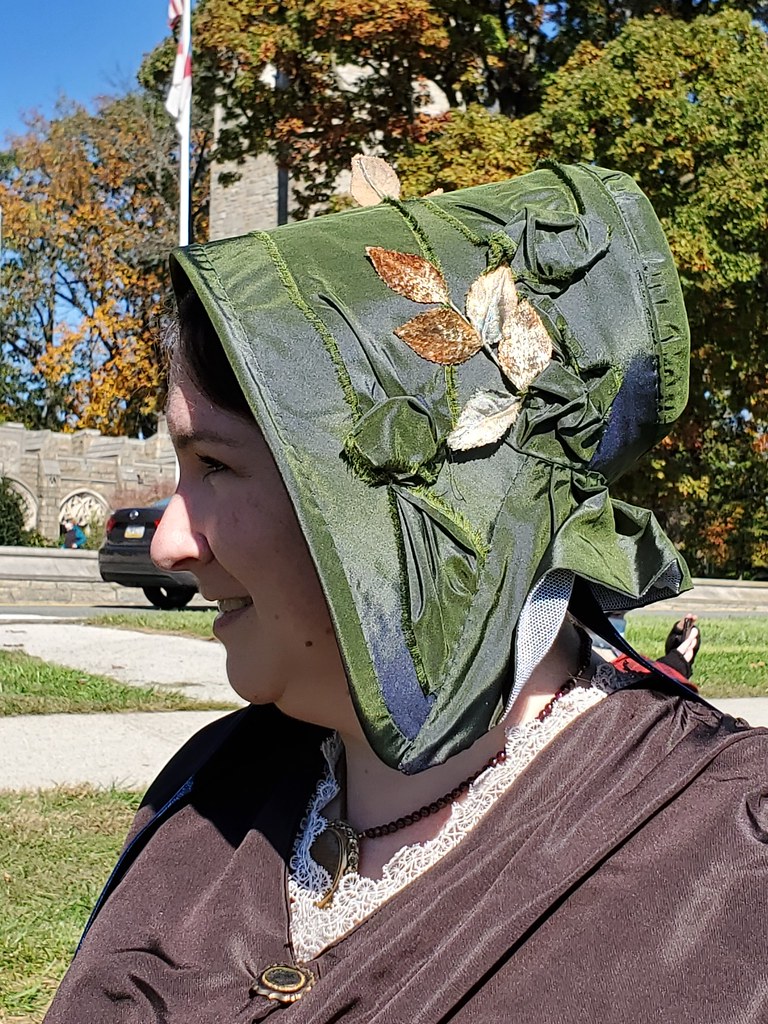 It was a great day with beautiful fall weather and a lot of fun just wandering around the park and taking silly pictures! 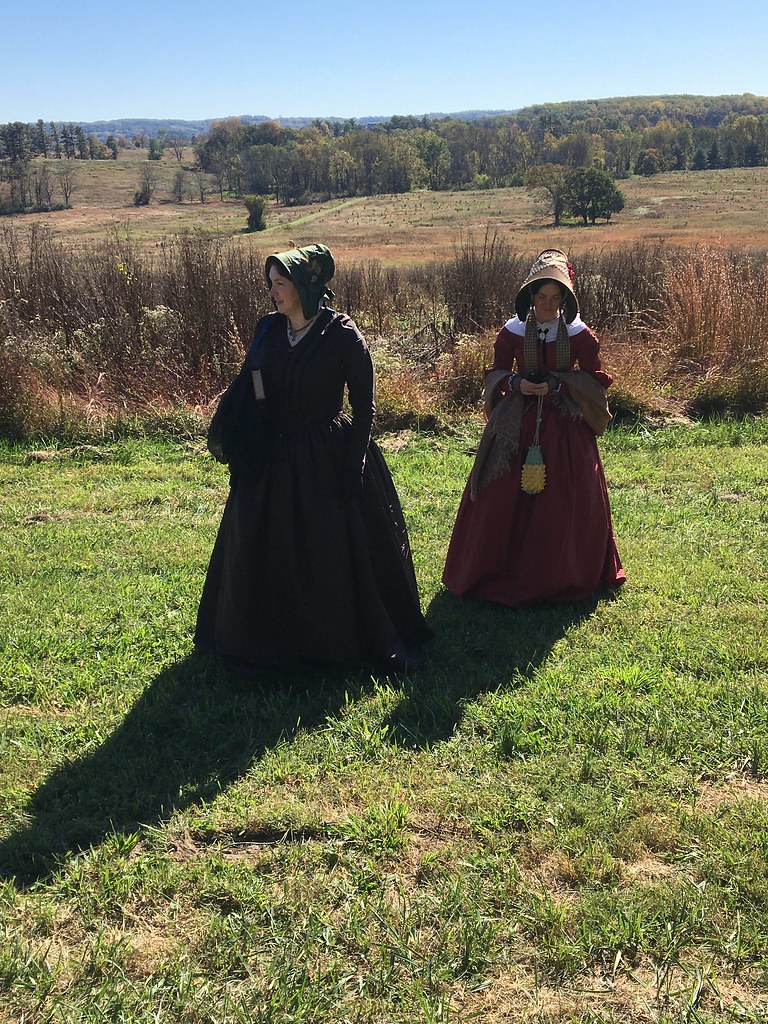