Because if your favorite American Girl doll in the '90s was Felicity, you've always wanted a cardinal cloak! Guilty as charged. 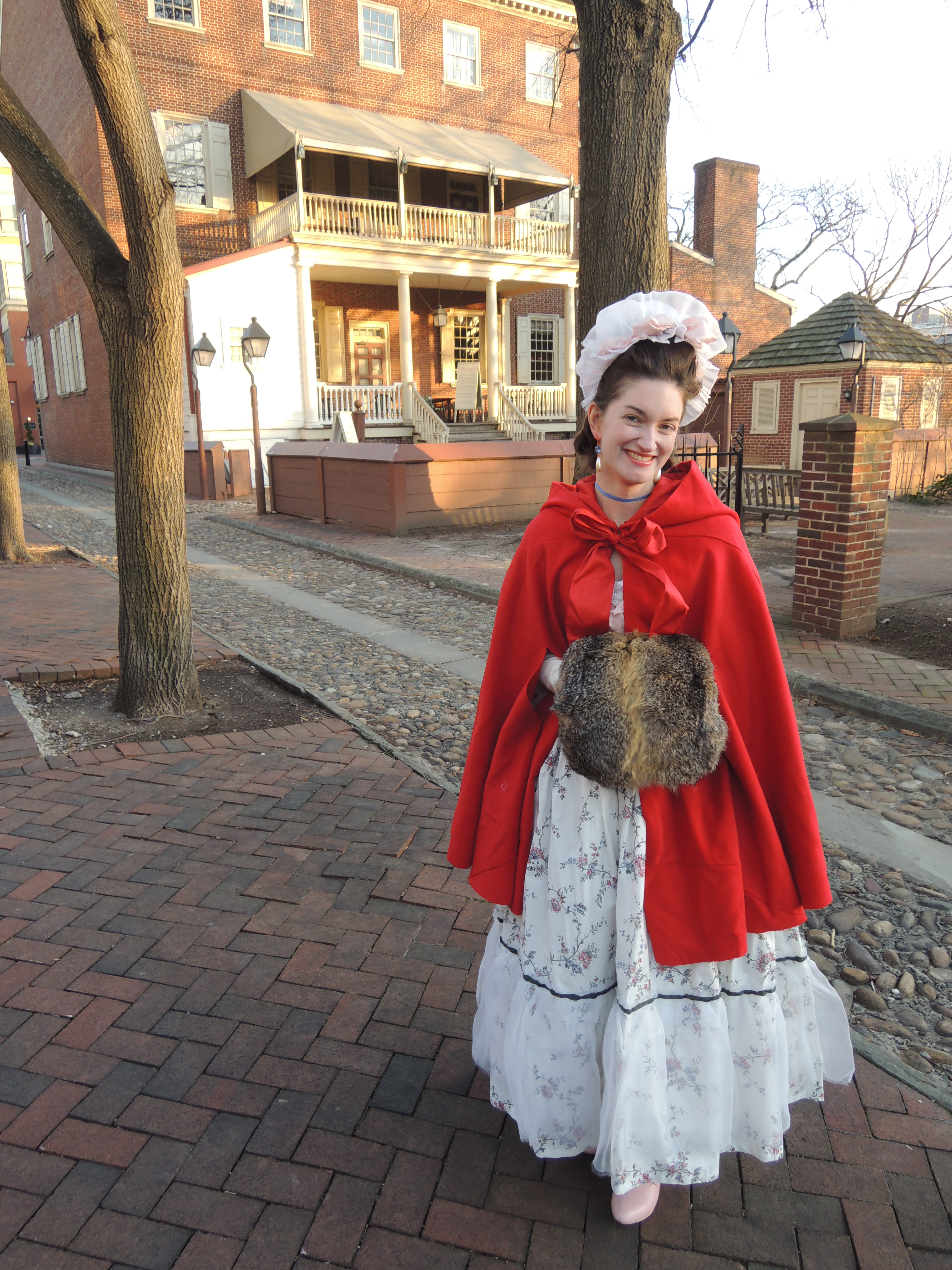 Back story of this cloak and the reason for finishing it at just this time: the Museum of the American Revolution in Philly has "after-hours" events occasionally, and this particular one was a "Winter's Ball", with dancing, and with Samantha of A Couture Courtesan there as well, to chat about the historical "Hamilton" dress she'd made. (She's an incredibly talented seamstress with impeccable taste, and I'm still impressed that she'll acknowledge she knows the likes of Yours Truly! Have I also mentioned she's a lovely person?) It was on a somewhat random Tuesday evening, but the Usual Suspects and I were all able to make it. 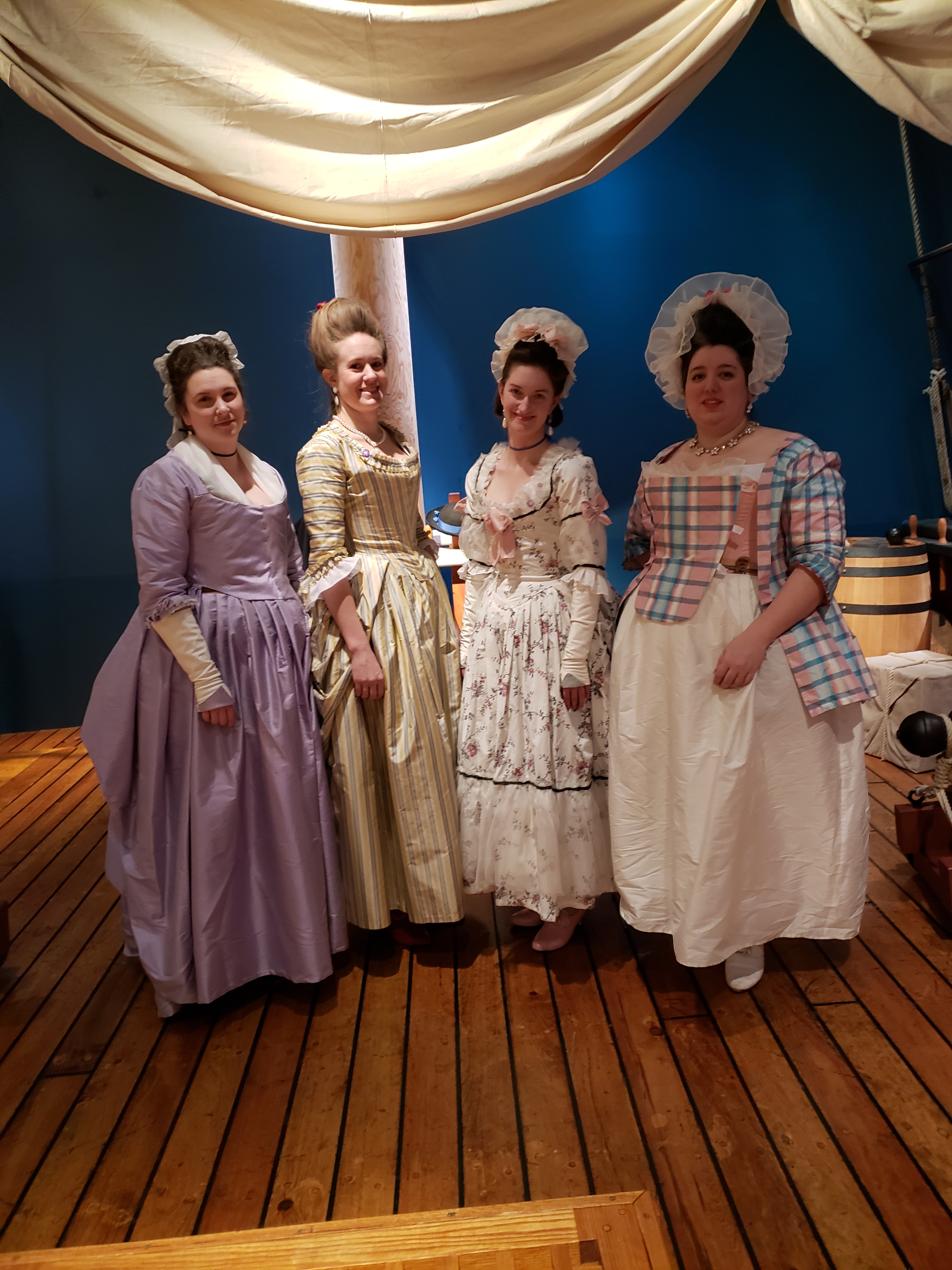 As for the cloak itself...well, I was originally planning to wear a new dress - an almost-finished 1780s silk stripe that's been in the UFO bin for far too long! But then the weather forecast inclined me to think about my outerwear instead. (COLD, if you wanted to know. High of 29F that day, which at least was better than the 15 it had been the couple of days previously?) My standard 18thc cloak, besides being rather ugly and old, is not particularly thick wool. However...I had a half-finished short cloak of red wool melton in the UFO bin. Yes please! 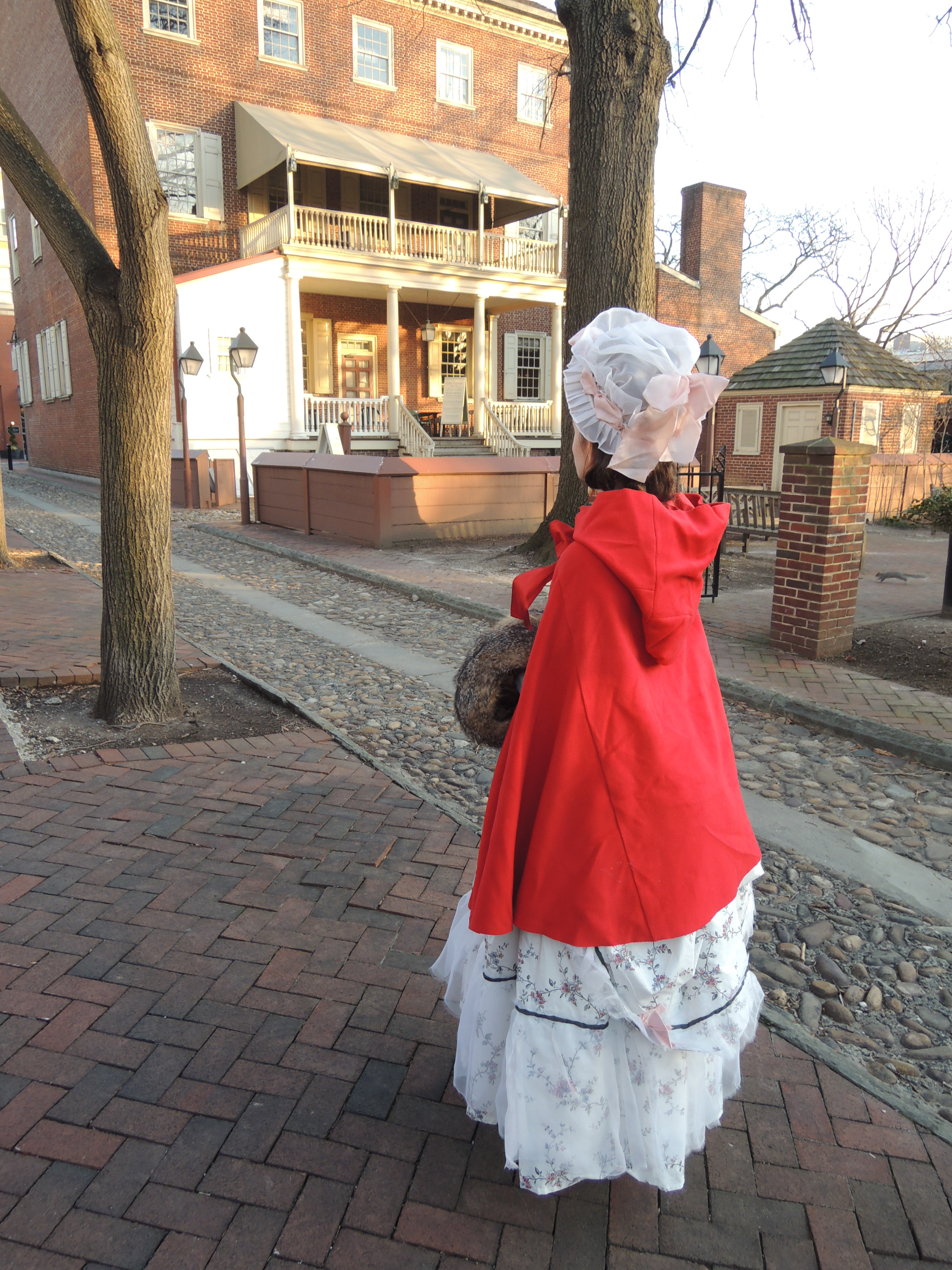 It's your bog-standard half-circle 18thc cloak, that I would have made longer if I'd had more fabric! The melton was gifted to me, and it was long enough ago that I don't at all remember how many yards there were; all I know is that I had to piece a bit to get that half circle and a big hood. Wanted an oversized hood to specifically be able to wear this with Fashionably Big Hair! 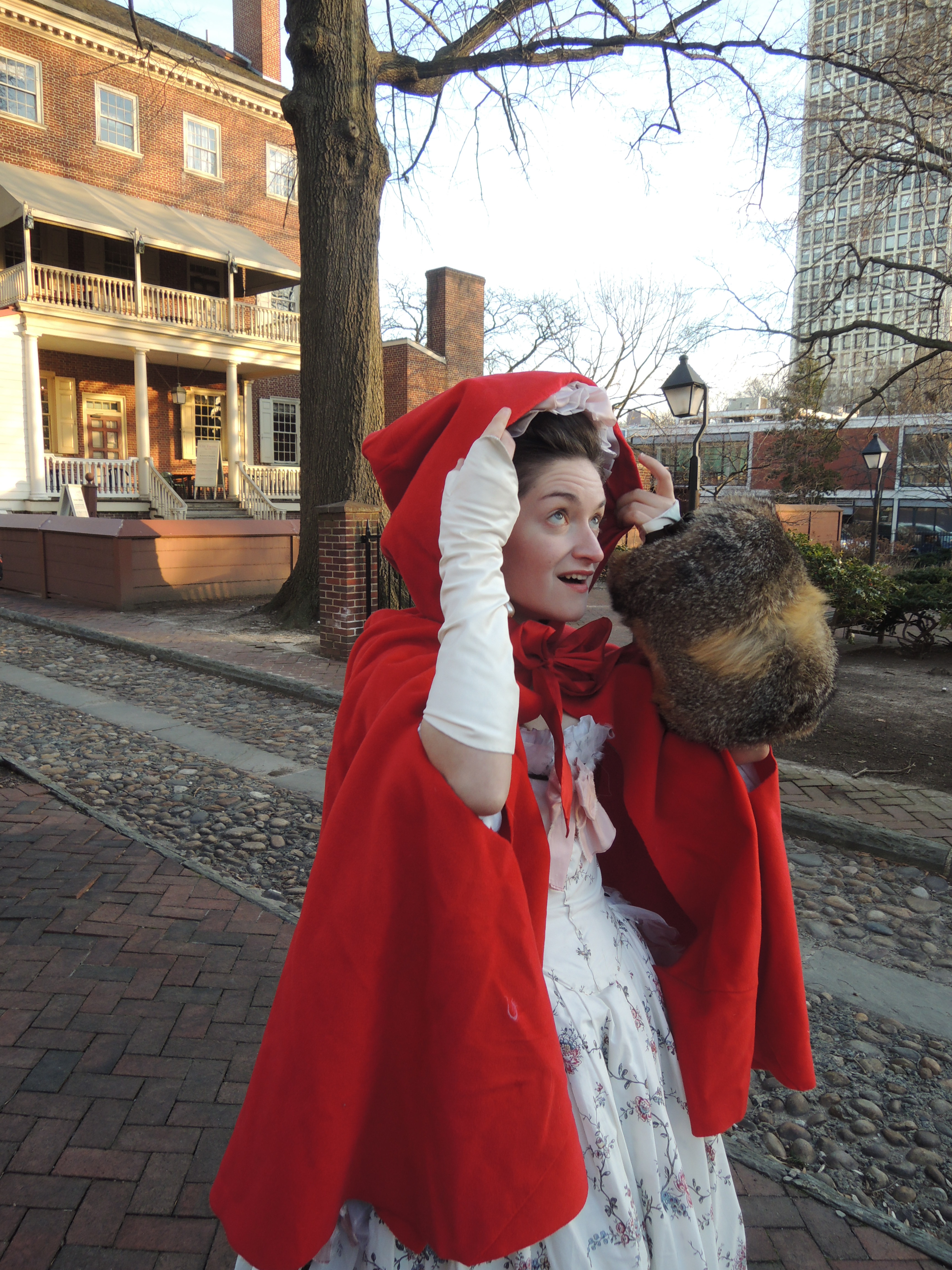 I lined the hood with the same red silk the ties are made of for a bit of extra insulation, and the cloak fastens with a hook and bar underneath the ties. (I have learned the hard way not to depend on ties only to fasten my cloak...hooks are much more dependable!) Other than that, there's not much to say about this garment...does what it says on the label! 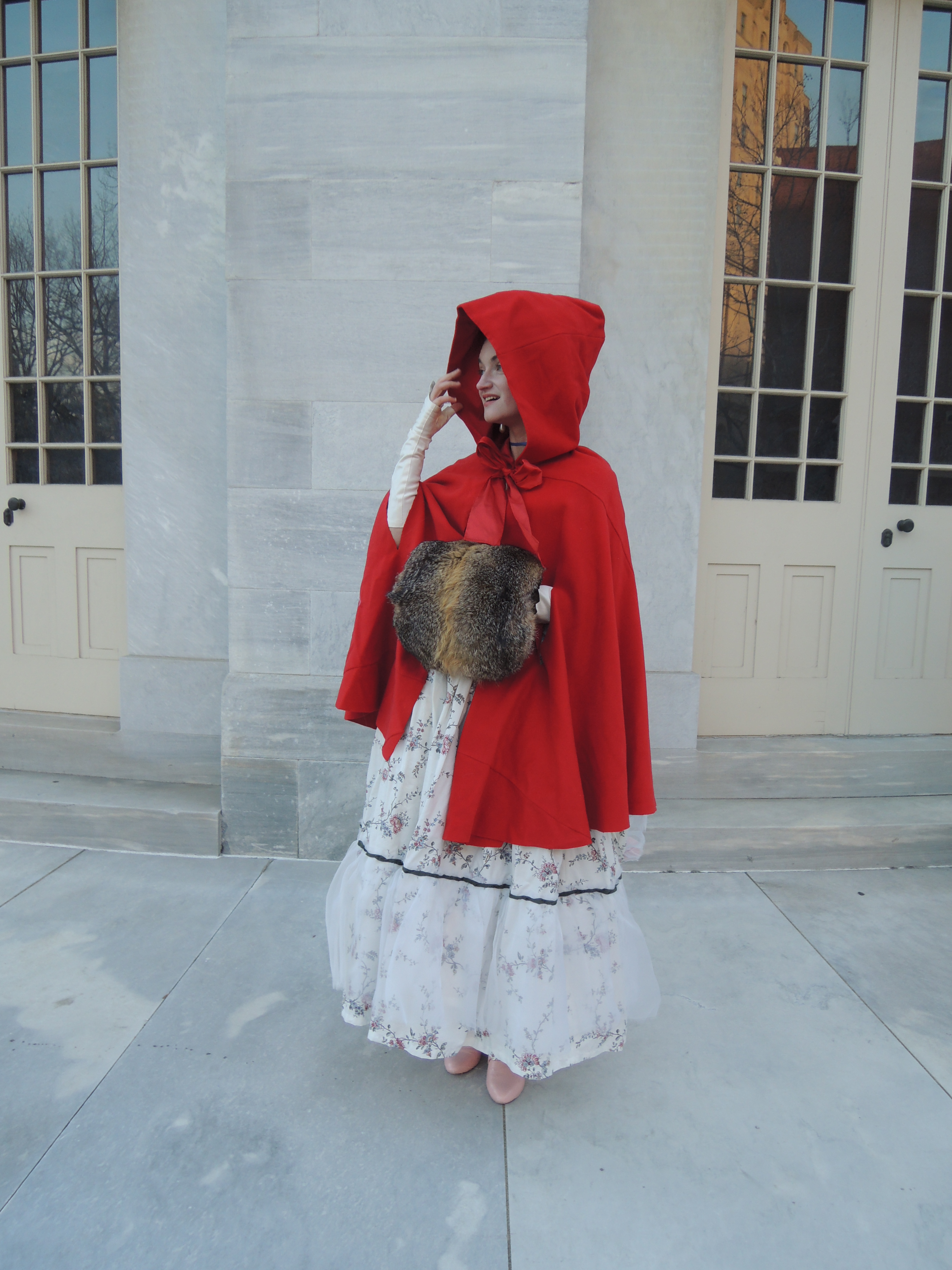 Apart from the Cold Feet situation, just add in a kerchief (bit drafty there!) and I'd be happy outside for a much longer amount of time than I spent walking from the parking garage to the museum, even in that thin printed cotton gown. My mitts are silk, my muff is fur, and I've got four petticoats on besides the visible top one! Inner to outer: wool-cotton blend, linen, linen, silk with a quilted border, and then the printed cotton. That's one more than I usually wear with this particular outfit, and two more than I wear with a middling-class 18thc outfit. Seriously, don't skimp on your petticoats, people...and love natural fibers!

(This has been your Petticoat PSA for the season; thank you for your attention and please petticoat wisely.)

A few more pictures for your consumption... 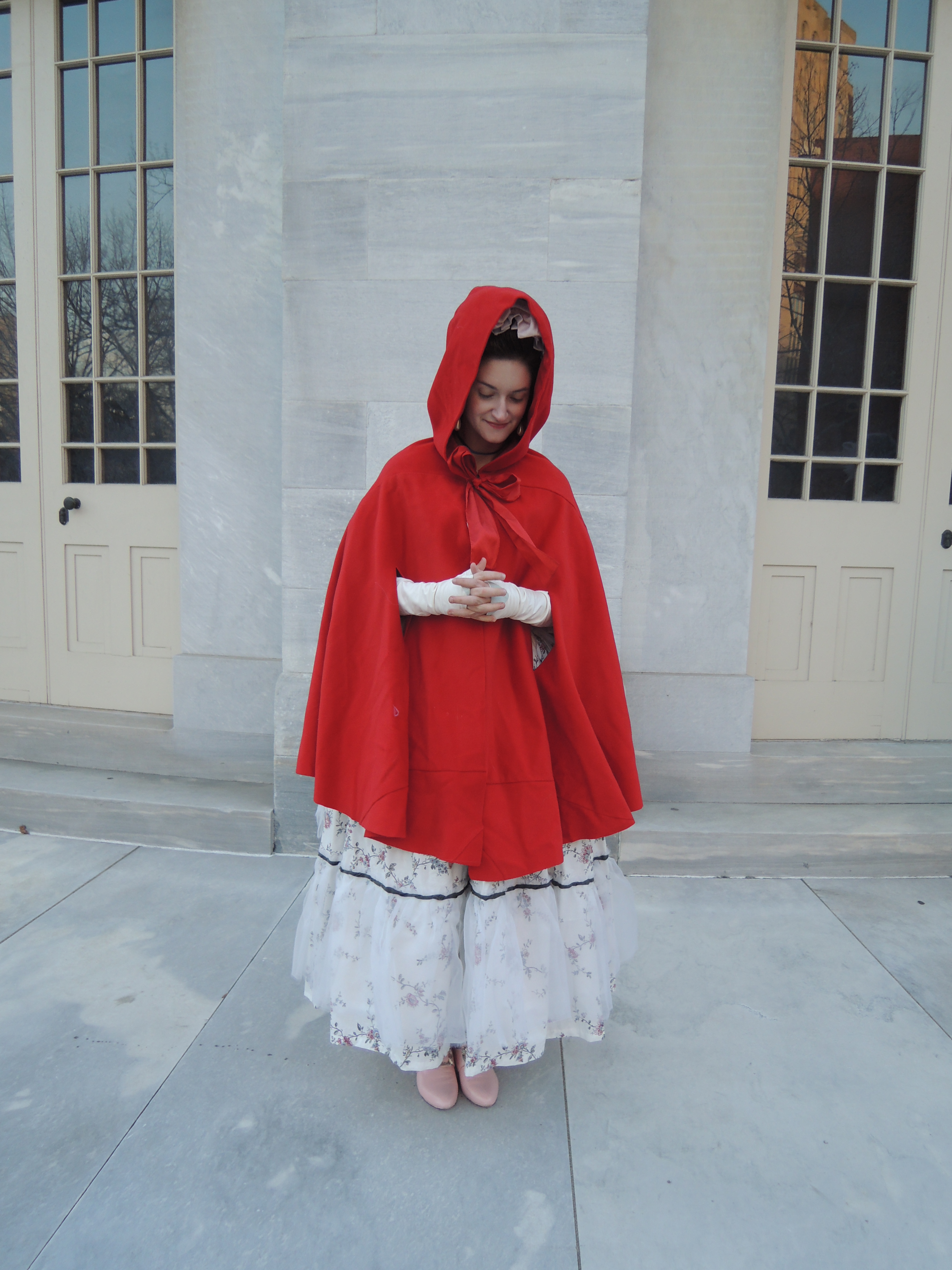 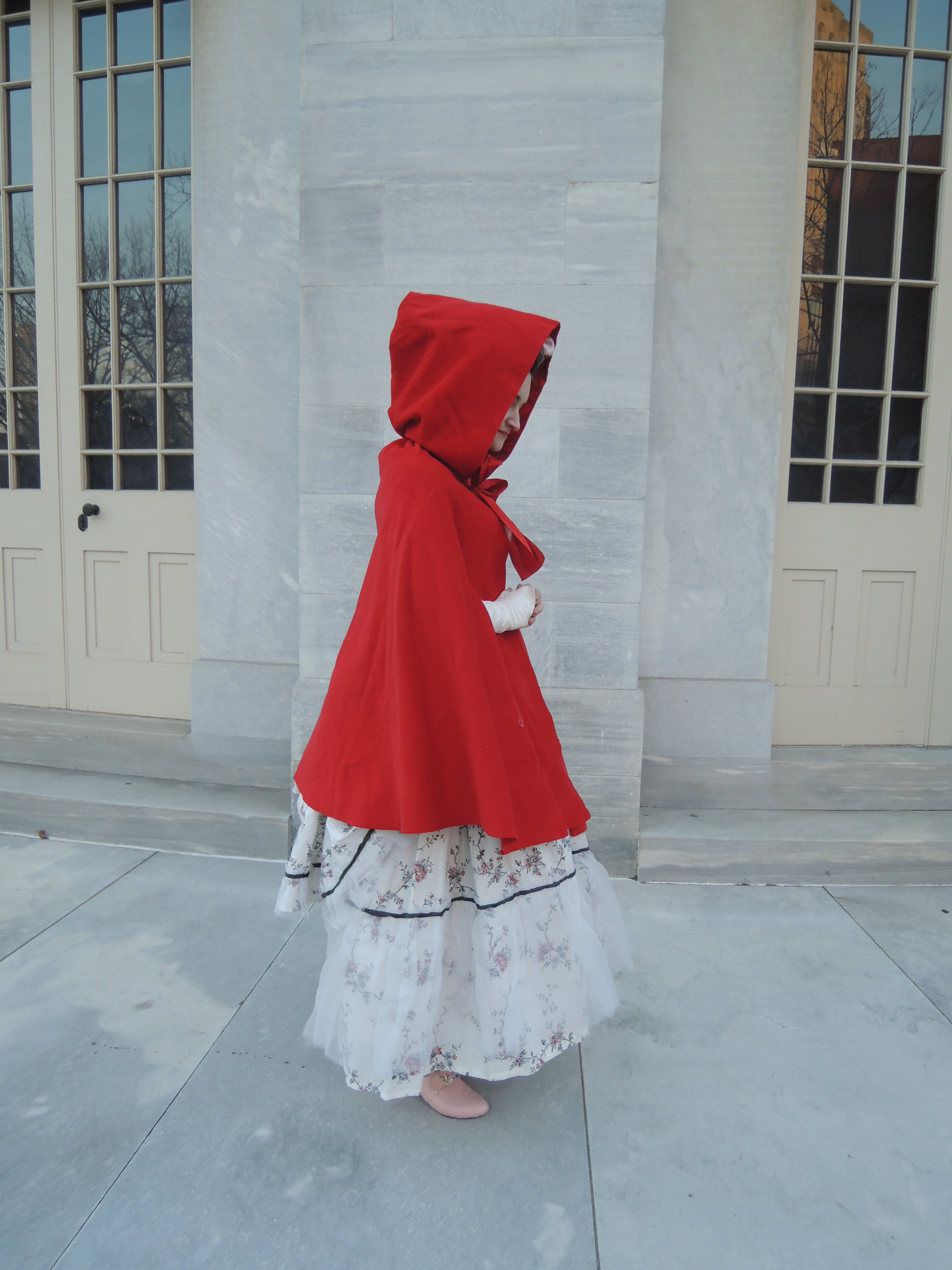 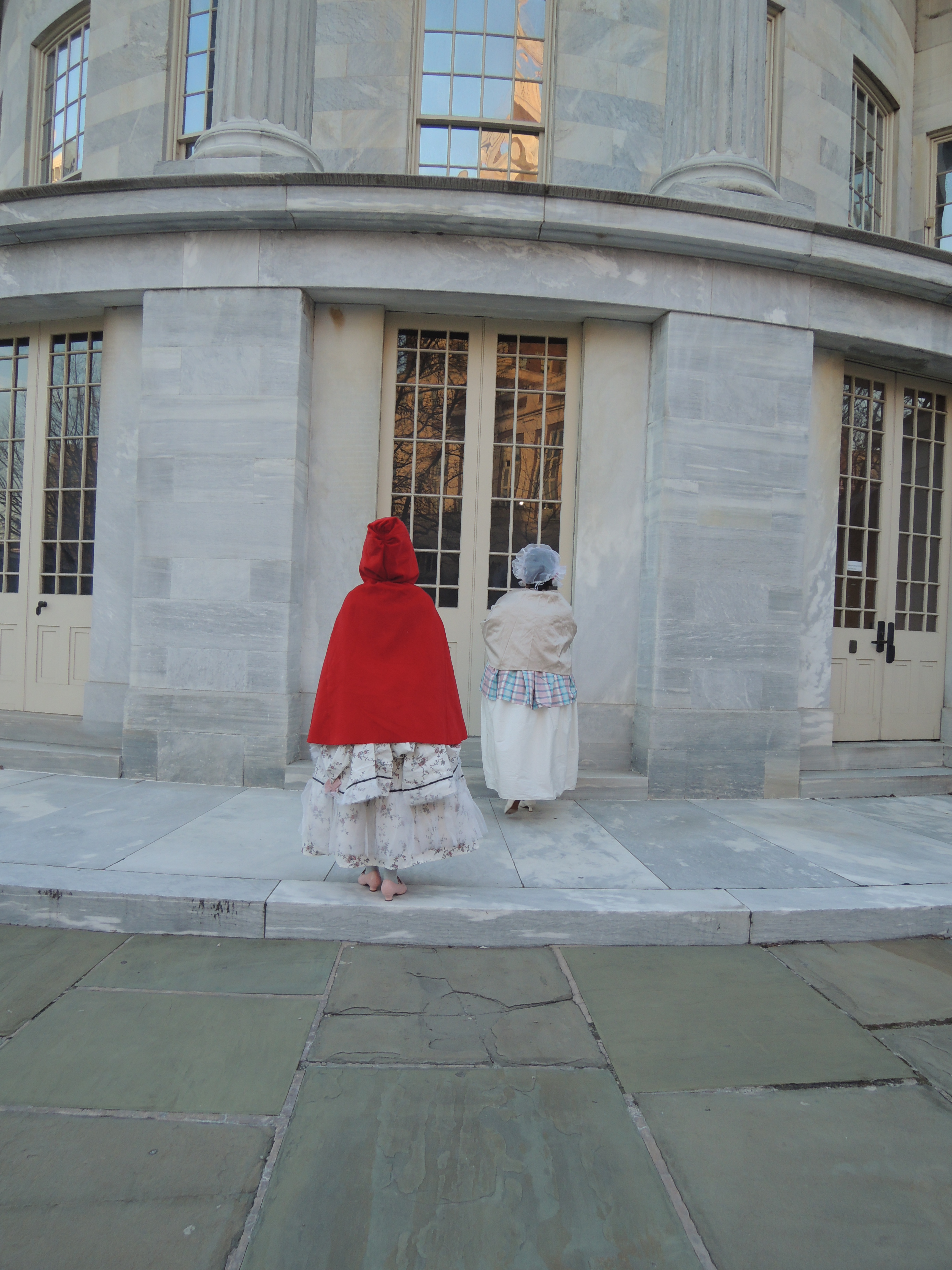 Other than finishing that long-neglected striped 1780s dress mentioned earlier (poor thing), I think the next sewing on the docket is going to be for a "Young Victoria" event that the Usual Suspects are doing in April. Most of the other ladies are doing 1830s and the ridiculous sleeves that go along with it - while I can't wait to see it, I really don't care for those giant sleeves on my own self, so I'm going transitional, 1837-40.

I'd like to make a new day dress and bonnet if I have time, but I'm focusing first on Mr. Dedicated Follower of Fashion, who I've been with long enough now that I feel secure investing time and money into an outfit for! Two outfits, actually, as it's a day and evening event. (Or one outfit, when I run out of time for two.) I bought the patterns for everything from Black Snail Patterns, as I like the look of them, and that they give you the historical methods and you can adapt to modern methods if you want. As with my own costumes, I like to know what's correct first, even if I decide I want to deviate later.

Also...boy clothes are weird. Trousers, man. It's a brave new world!
Posted by Amanda at 12:48 PM