- August 07, 2018
I haven't been sewing much this summer, but I did manage to scrape together a new skirt and hat to do a Great War event with the Usual Suspects in Ringwood, NJ this past weekend. 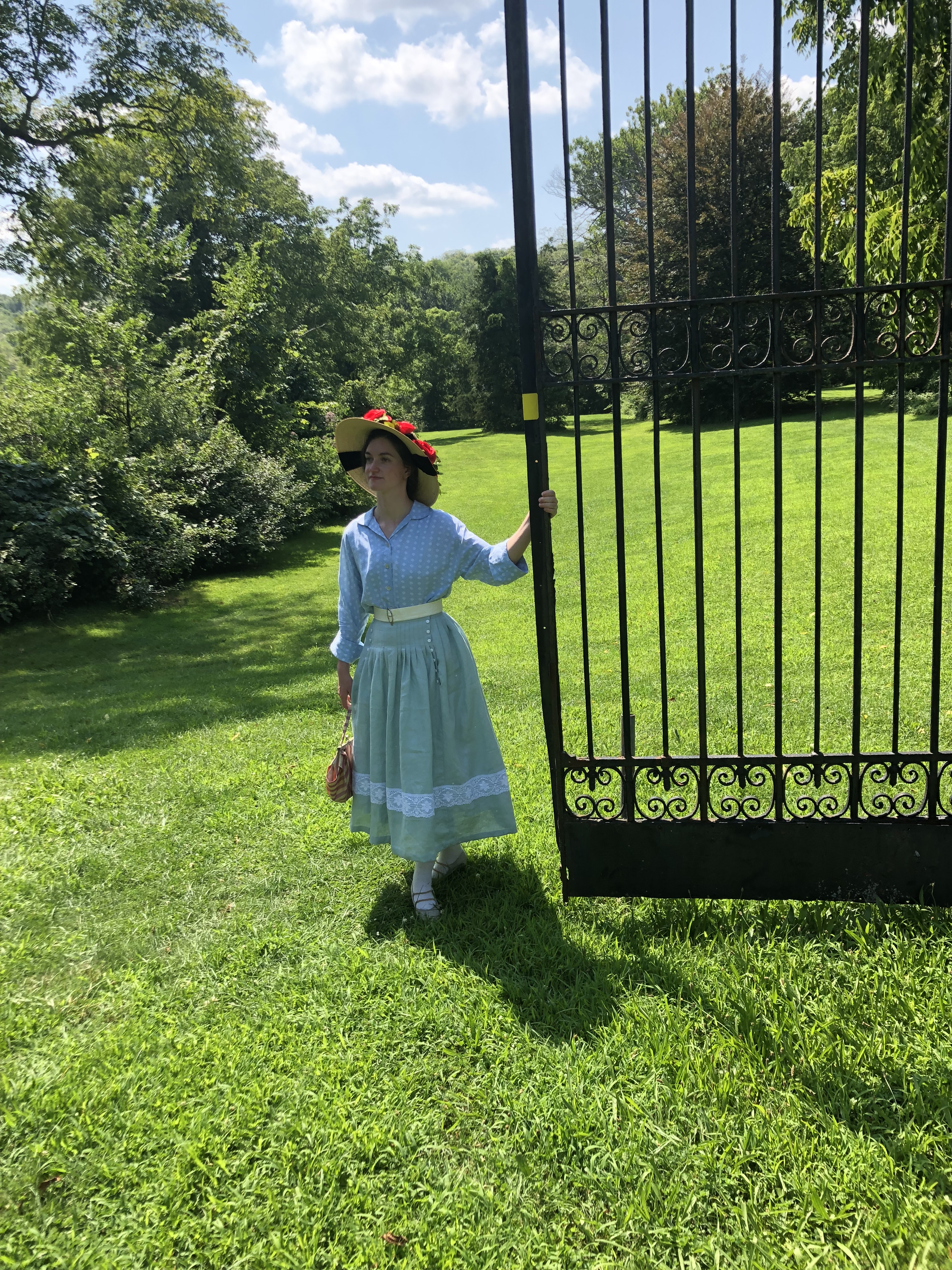 It was a nice (if small) event, and Ringwood Manor and its grounds turned out to be excellent for photos! We brought a picnic lunch (and ate far too many scones with clotted cream and various curds - yes, that is how we do), took a tour of the manor, and tried not to melt in the heat! It was only about 50%  humidity and there was a lot of shade, but it was still in the mid-90s, so by about 4pm we were all pretty well wilted, and ready for a parking-lot strip and drive home in air conditioning!
Originally I wanted to make some pretty, frothy summer whites, like this dress, but two weeks out from the event I hadn't found my motivation for doing so, and it was unlikely to show up at that point! So I decided to be more practical, and just make a new skirt to wear with my blue blouse that I wore with my 1914 suit. They're different tones of blue, which maybe wouldn't have been my first choice but...it still works? Well enough? 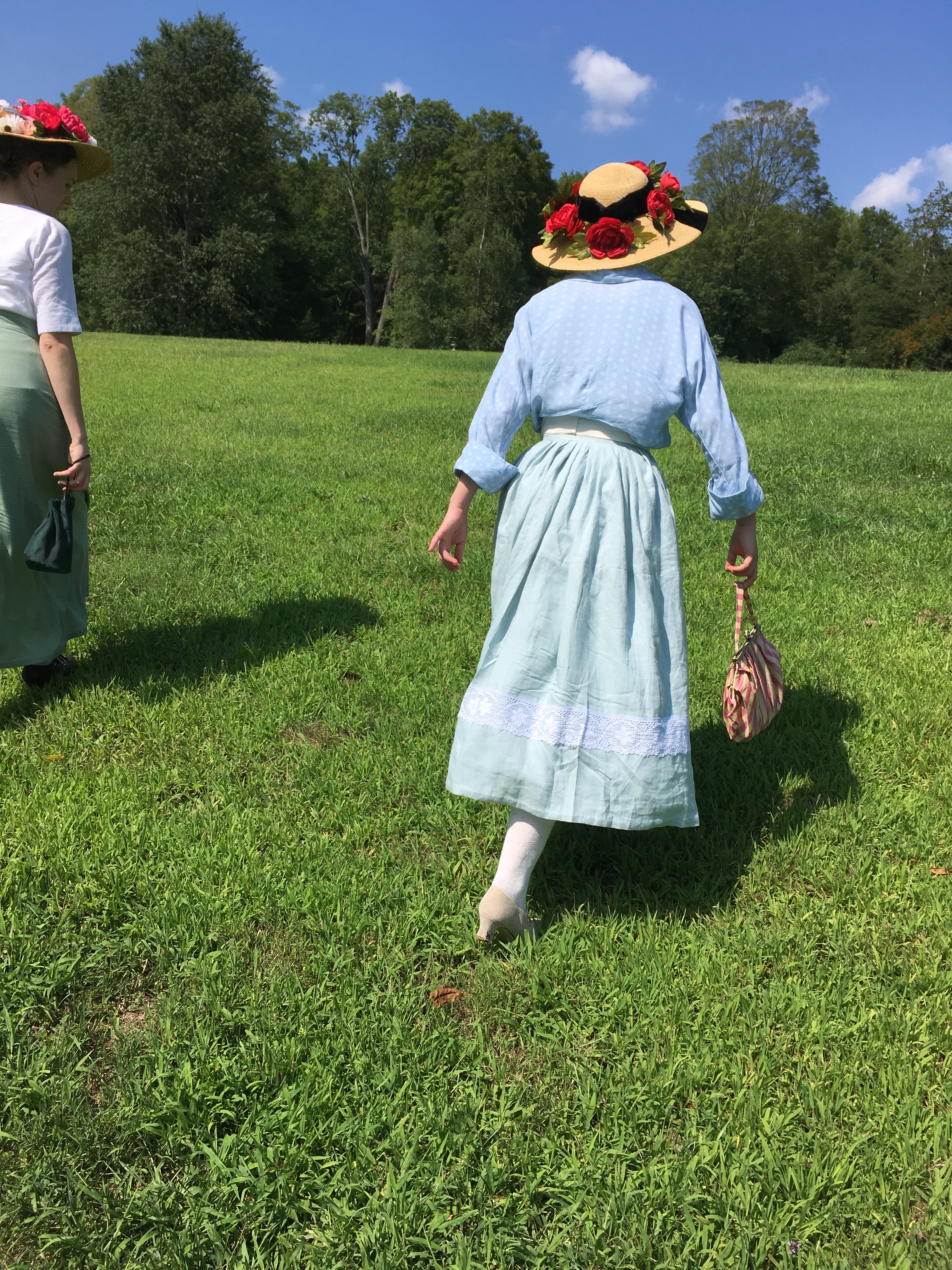 I took my inspiration from this dress (bottom, second from left); I thought it would be simple to make, look nice with the materials I had on hand, and look fine as just the skirt! Someday I might make the top half, if I have the inclination and can squeak it out of the leftover fabric, but that wasn't happening for this weekend. 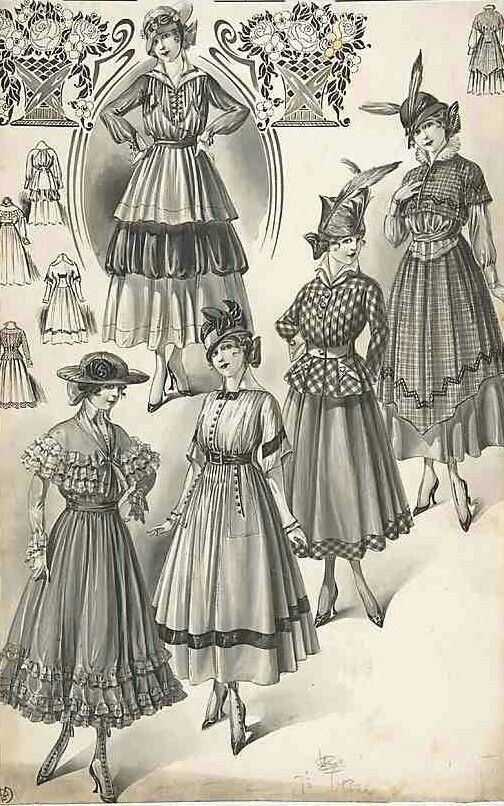 I told myself this had to be from the stash, since this was a small event and the likelihood of doing another Great War event is pretty slim! Which was harder than you would think, looking at my fabric stash...but I have a lot of wool and silk, neither of which I wanted to use for a dead-of-summer outdoor event! After a lot of digging, I found some scraps leftover from my blue linen turque, and managed to eke a skirt out of them with some piecing! 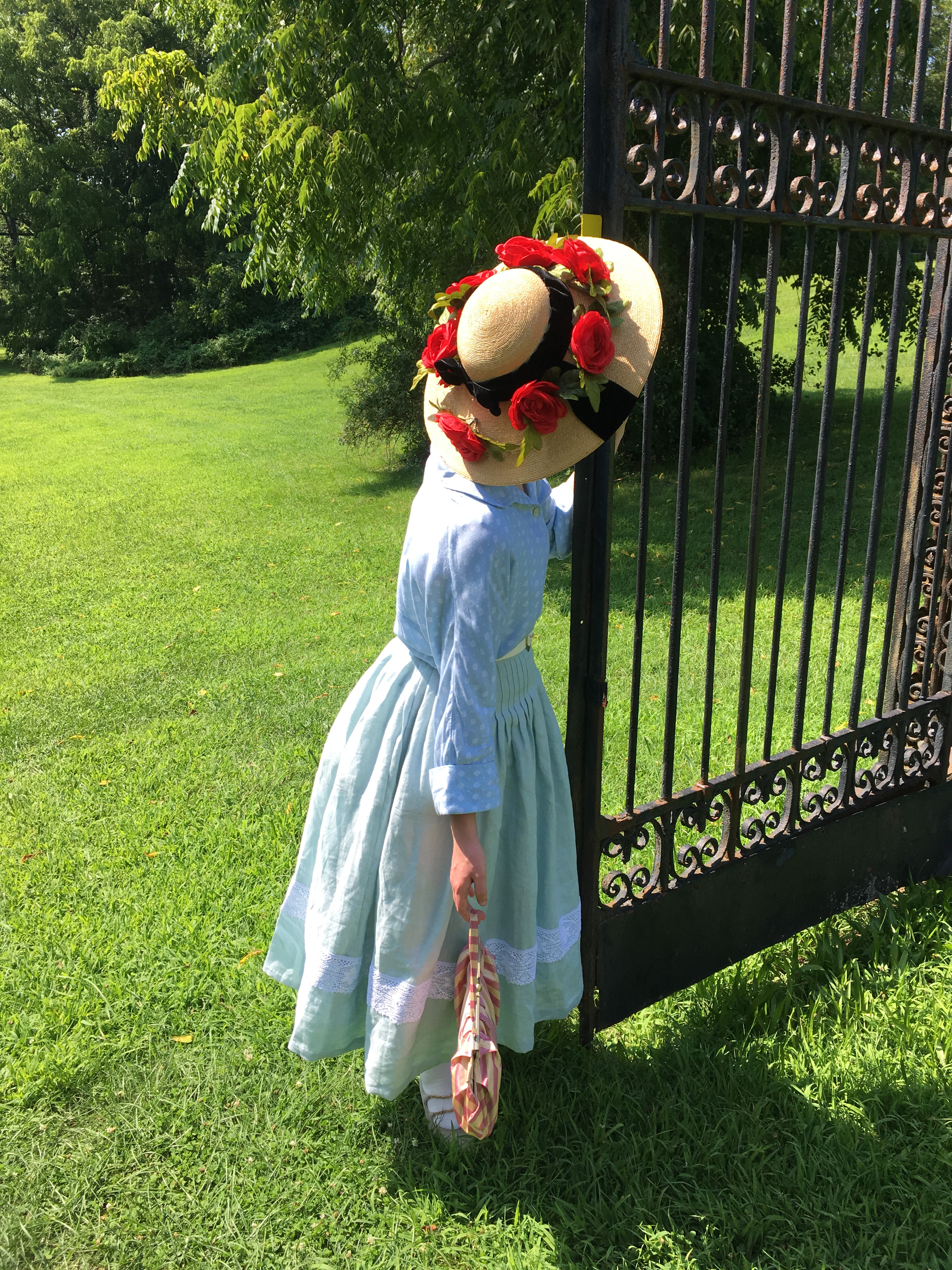 I don't think you can see in any of the photos, but one of the back panels has two horizontal seams, and the other has three! I was determined to use this linen...

The construction is very straightforward: tucks hand-sewn in the front of the skirt, and the rest of it pleated up to the waistband. I did end up buying the buttons, as there are 7 on each side plus I wanted to make sure I had the same ones in case I make the top half of the dress someday...that's just more buttons of one type than I have stashed! Not a big button-stasher. The white cotton lace was what I bought months ago when I was still planning to make a summer whites dress; it's English lace from ebay.

The hat was inspired by the lady in the center of this plate. I already had a plain straw hat (from an antique store that had bins of $5 hats, yes please!) that I just cut down the crown a couple inches, tricked out in velvet ribbons and clearance floral from the craft store, and called it Good Enough! 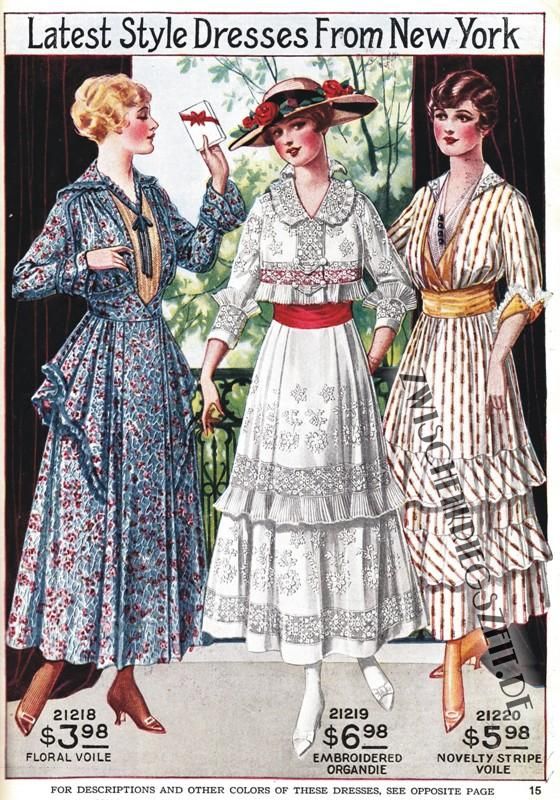 I mean to have it tilted a bit further forward, but I did my hair a little too low, so it naturally settled there (and made me look like I had no hair at a certain angle...nice). 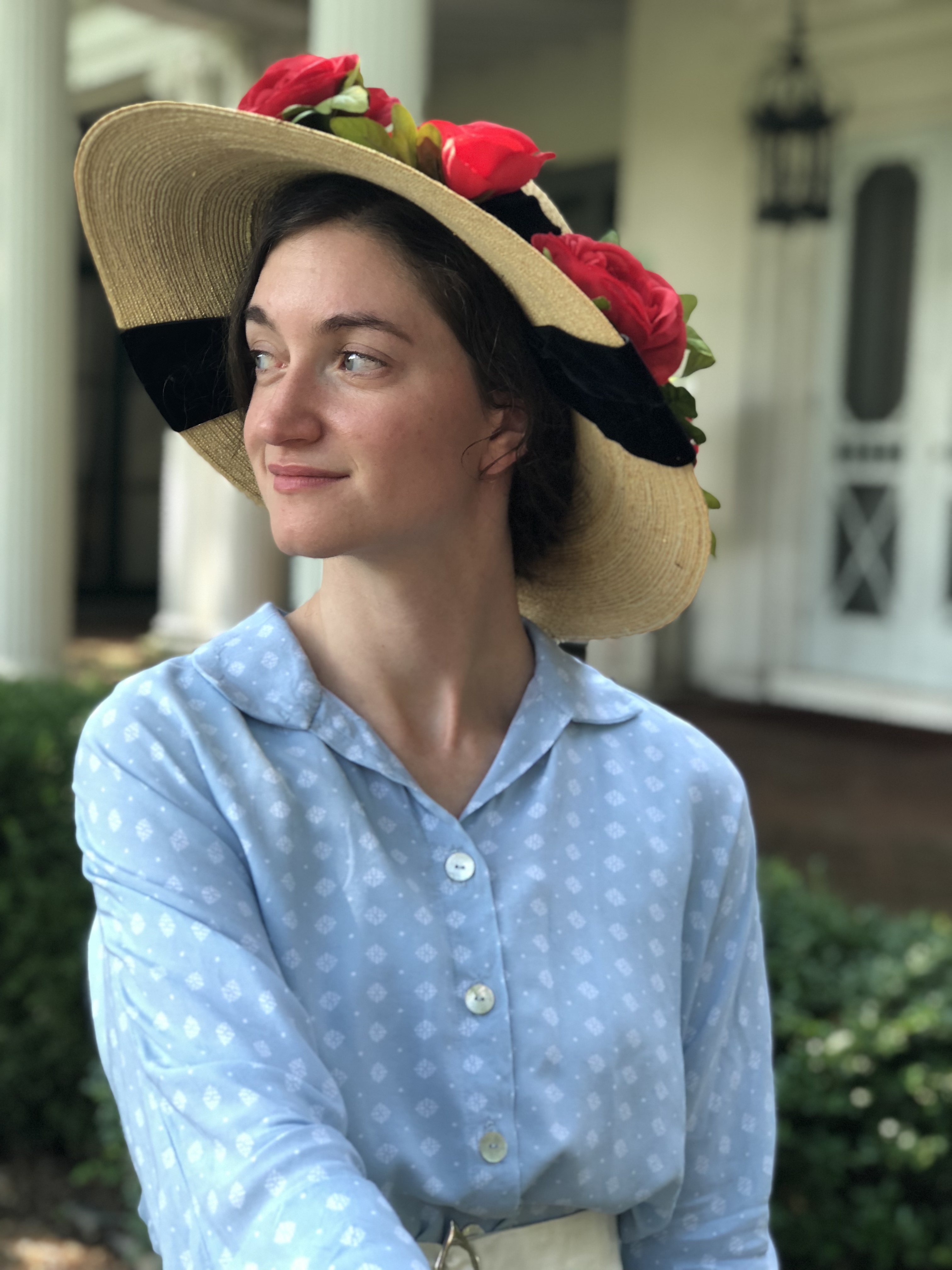 I also made the belt with silk taffeta and a vintage buckle from my ebay bag o'buckles. I did not make my purse; that was compliments of my lovely friend Adrienne (she of the plaid dress), and I don't think we got any nice pictures of it, whoops. It's fabulous though! Shoes are ebay'd - just old 80s/90s faux-Edwardian-style but they're cheap and easily findable! At least in my size... The heel caps completely disintegrated over the course of the day but that comes with the territory! That's replaceable, anyway. 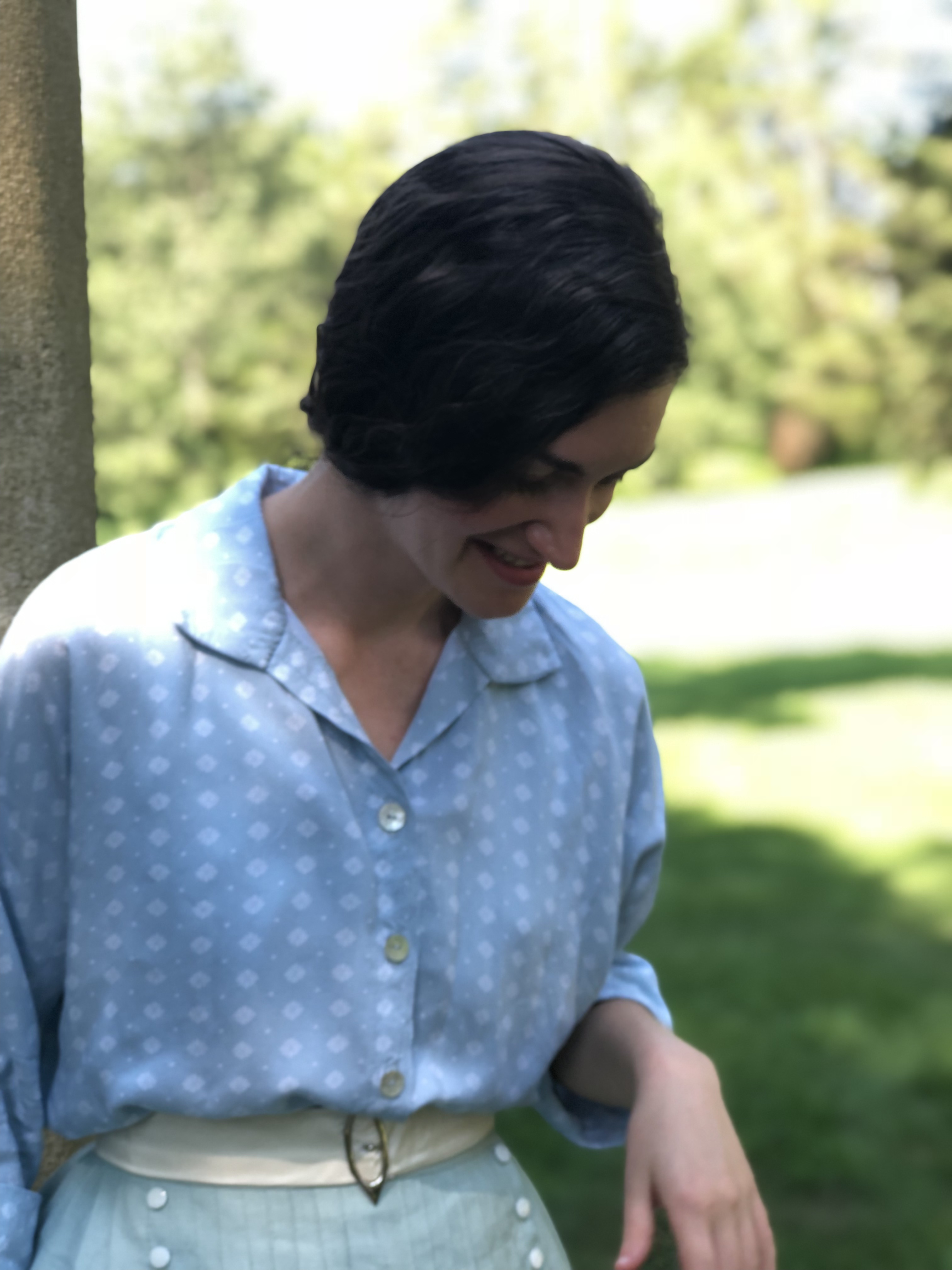 And I'll mention my undies because they amuse me: I made combinations from the Wearing History pattern that are hilarious because the crotch flap really is at your knees. I intended to make a corset cover as well but...didn't. Maybe next time! Also wore my teens corset (from Corsets & Crinolines) and...the hoop petticoat that goes over my short fancy-dress 1860s hoop. Yes, really. LOL. It's not perfect but it was definitely my best option! 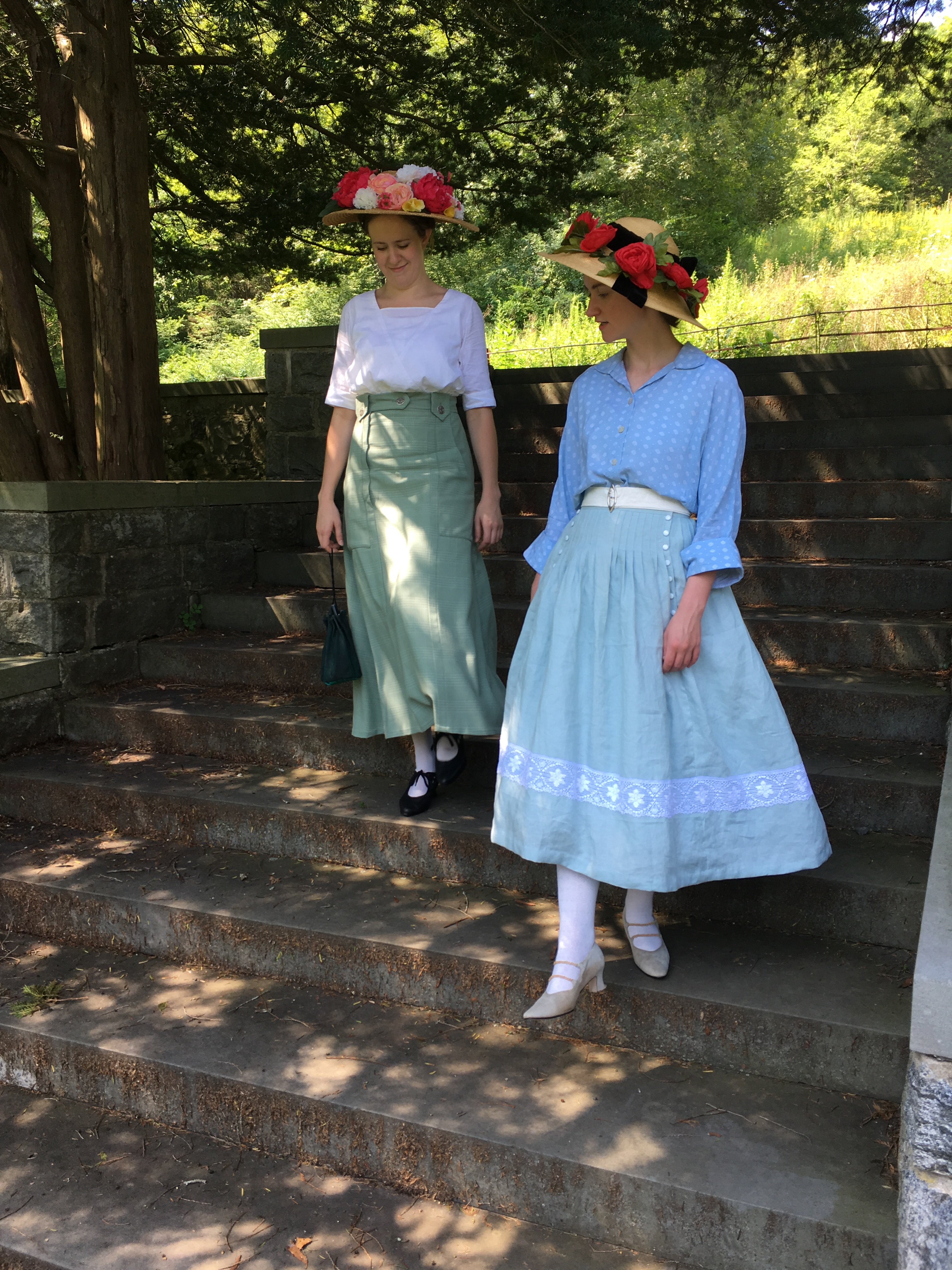 Despite the heat, we had lots of fun swanning around the grounds and taking overly dramatic photos by gates and pillars and sphinxes and things! As you do. 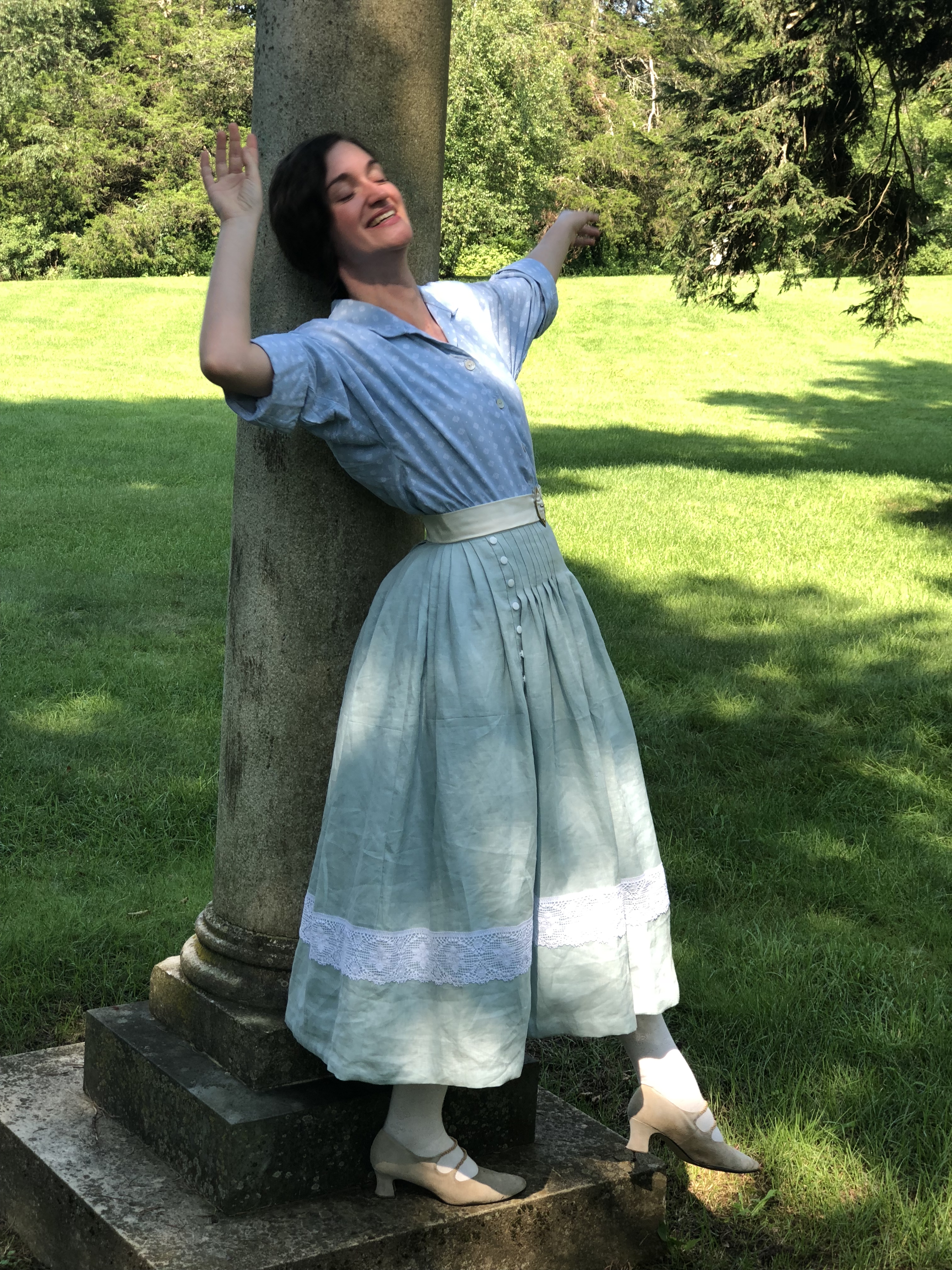 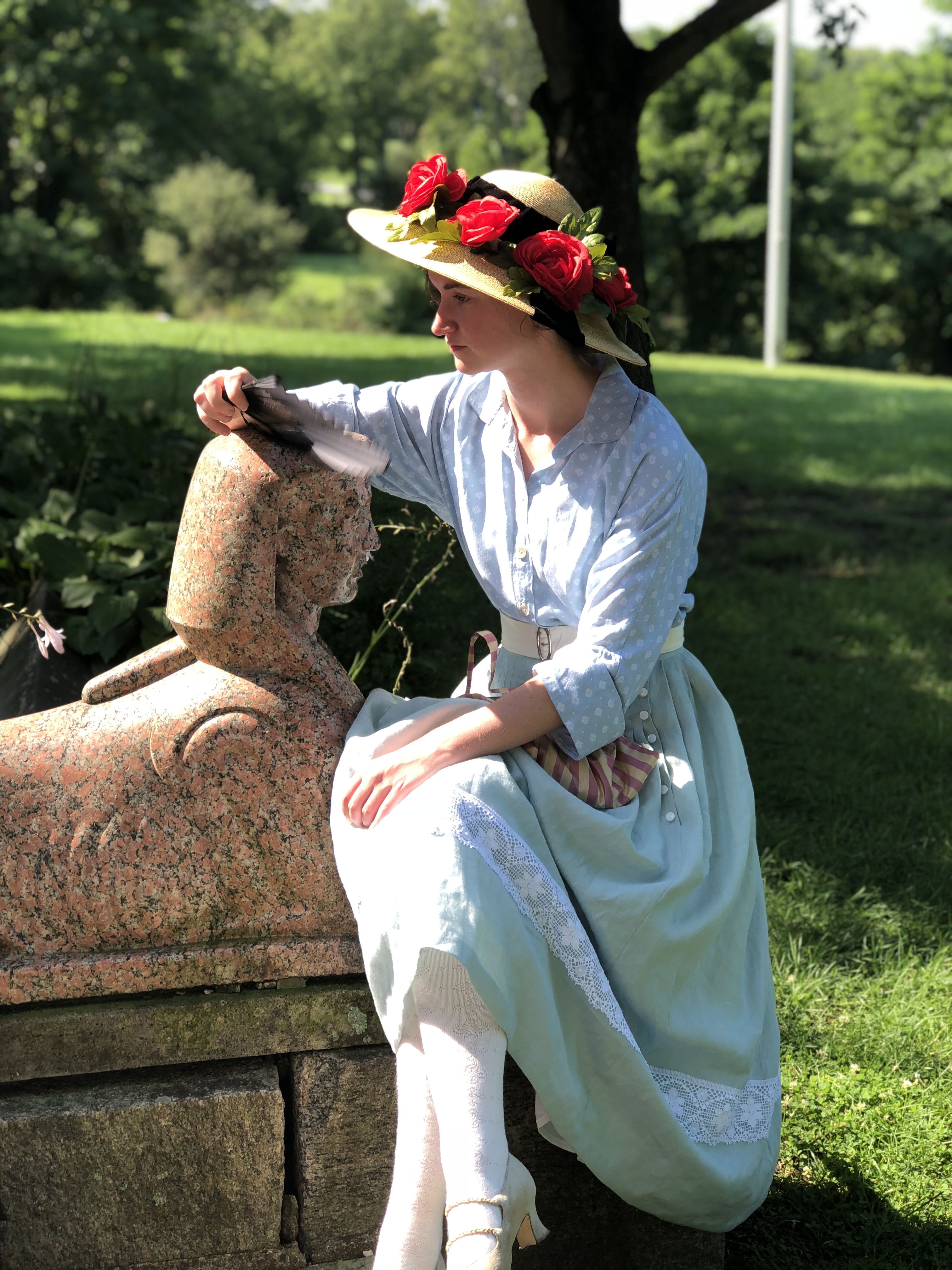 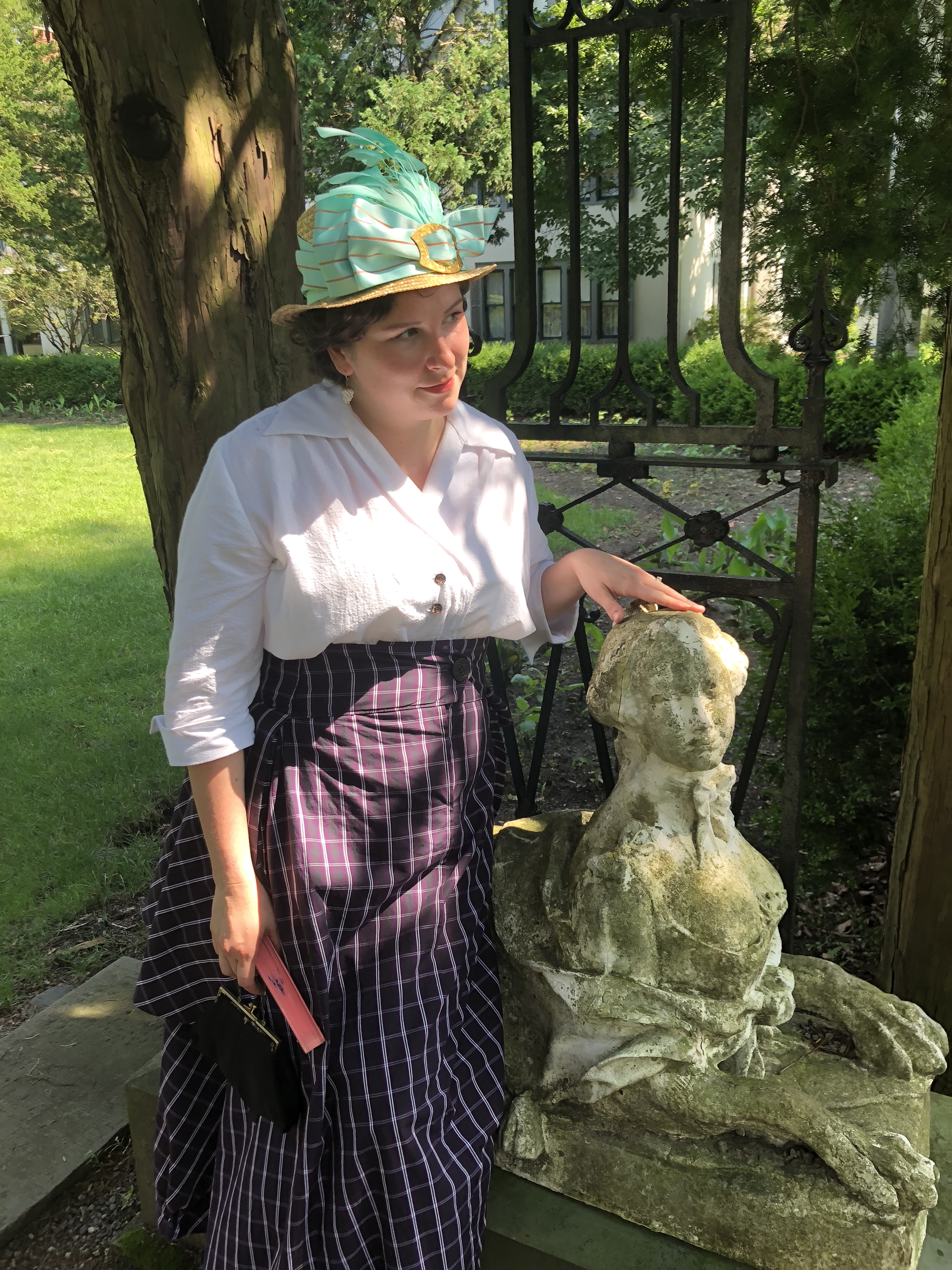 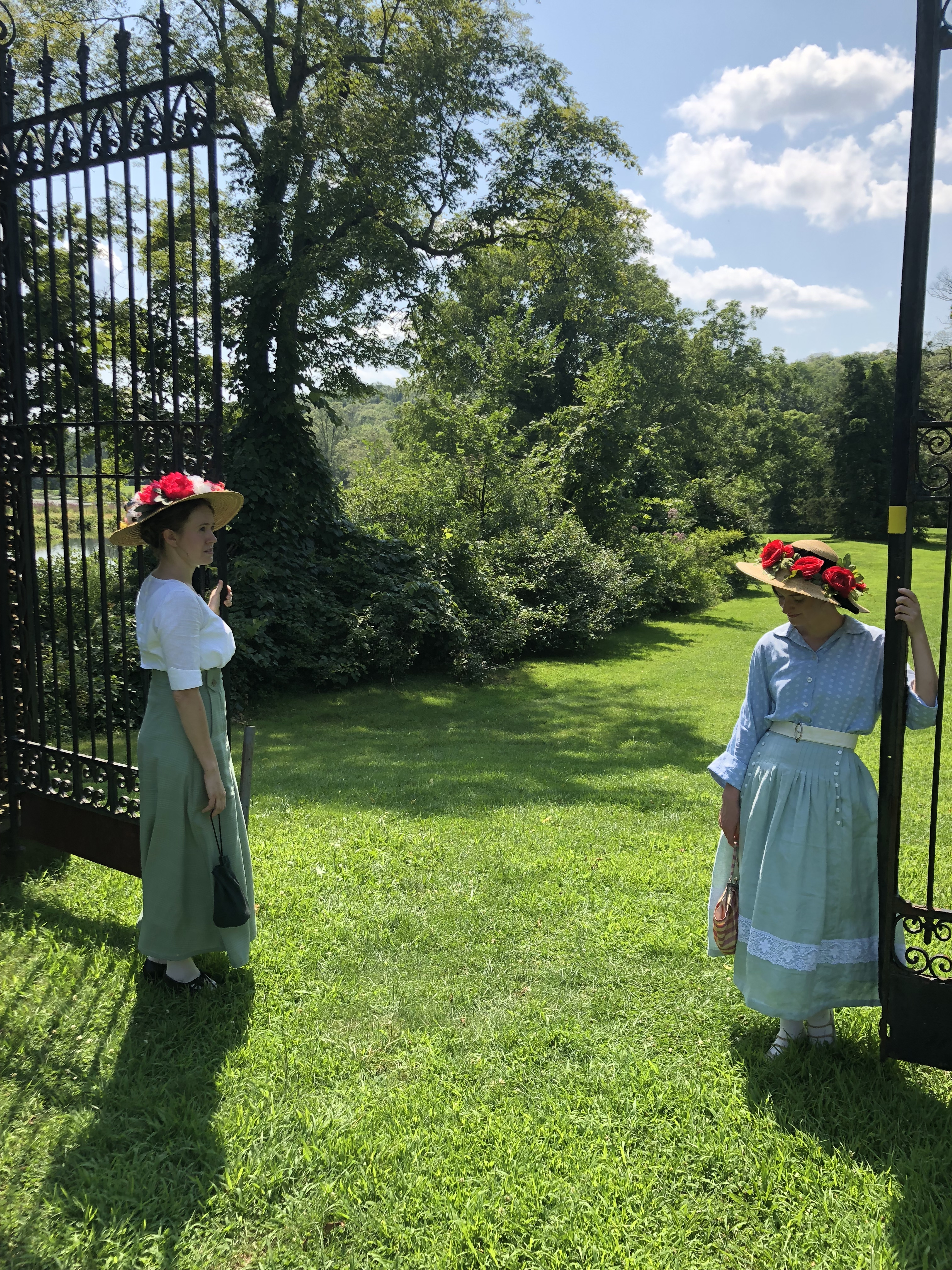 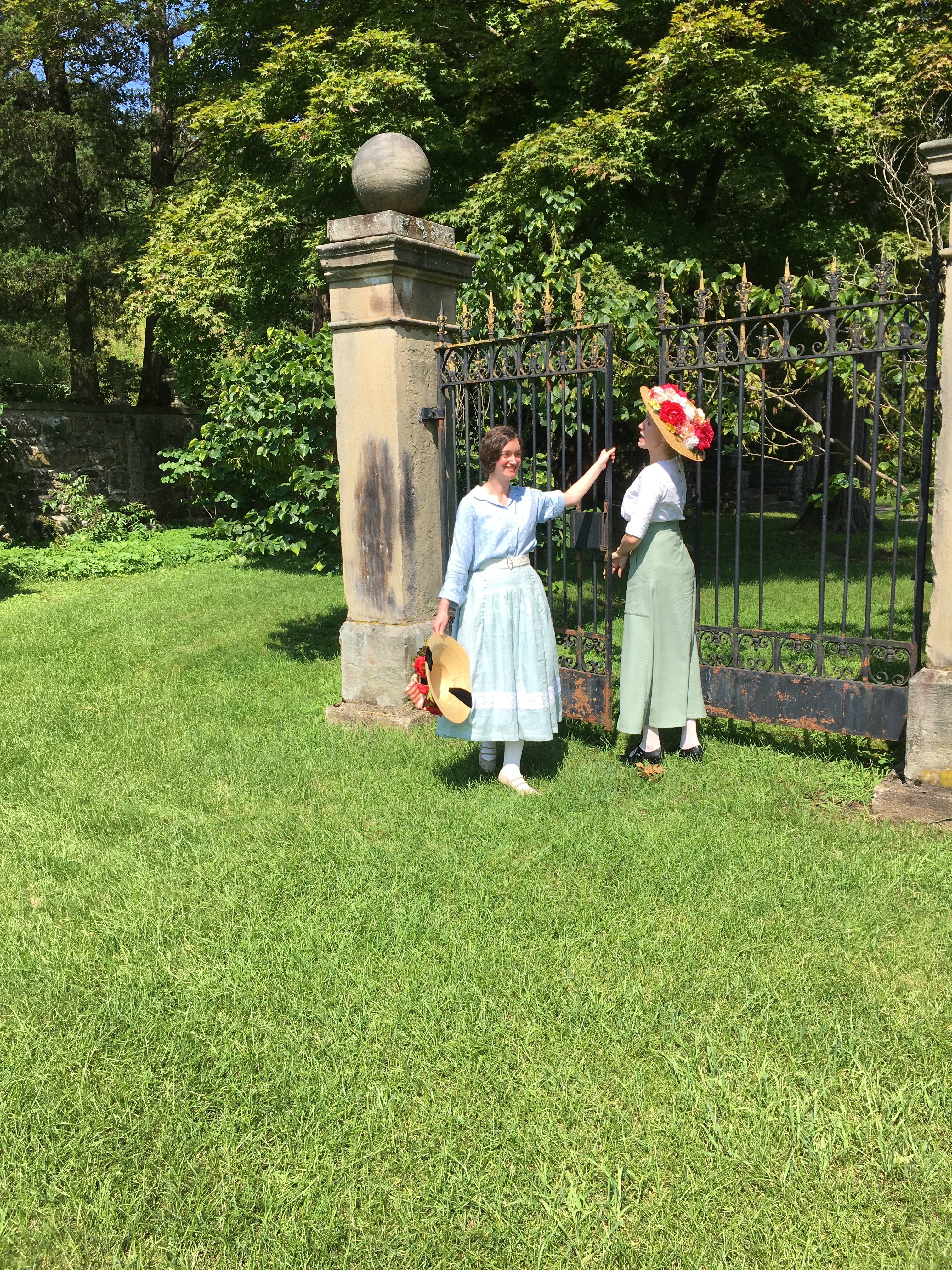 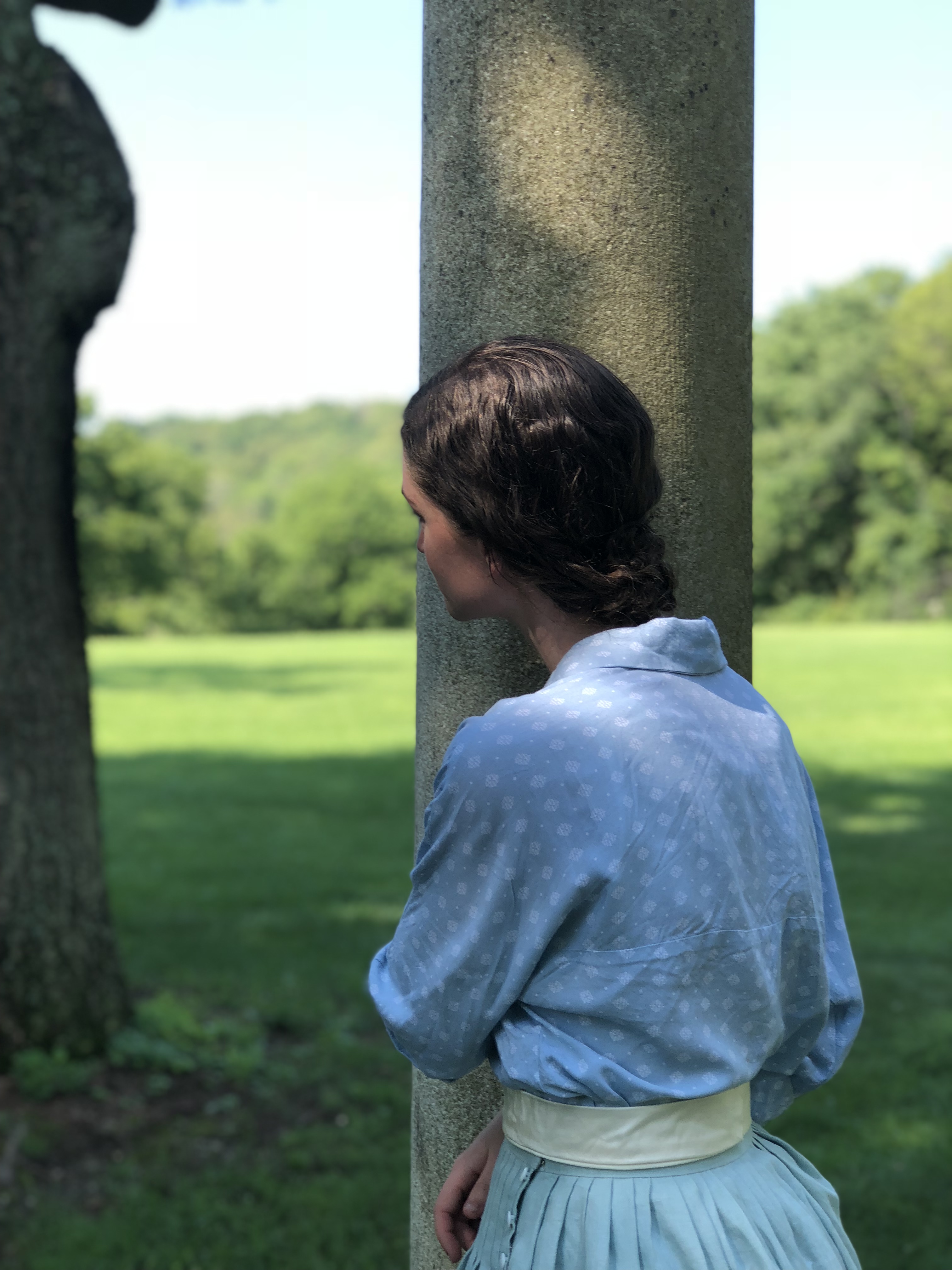 Same goes for columns, urns...you name it, we got it! 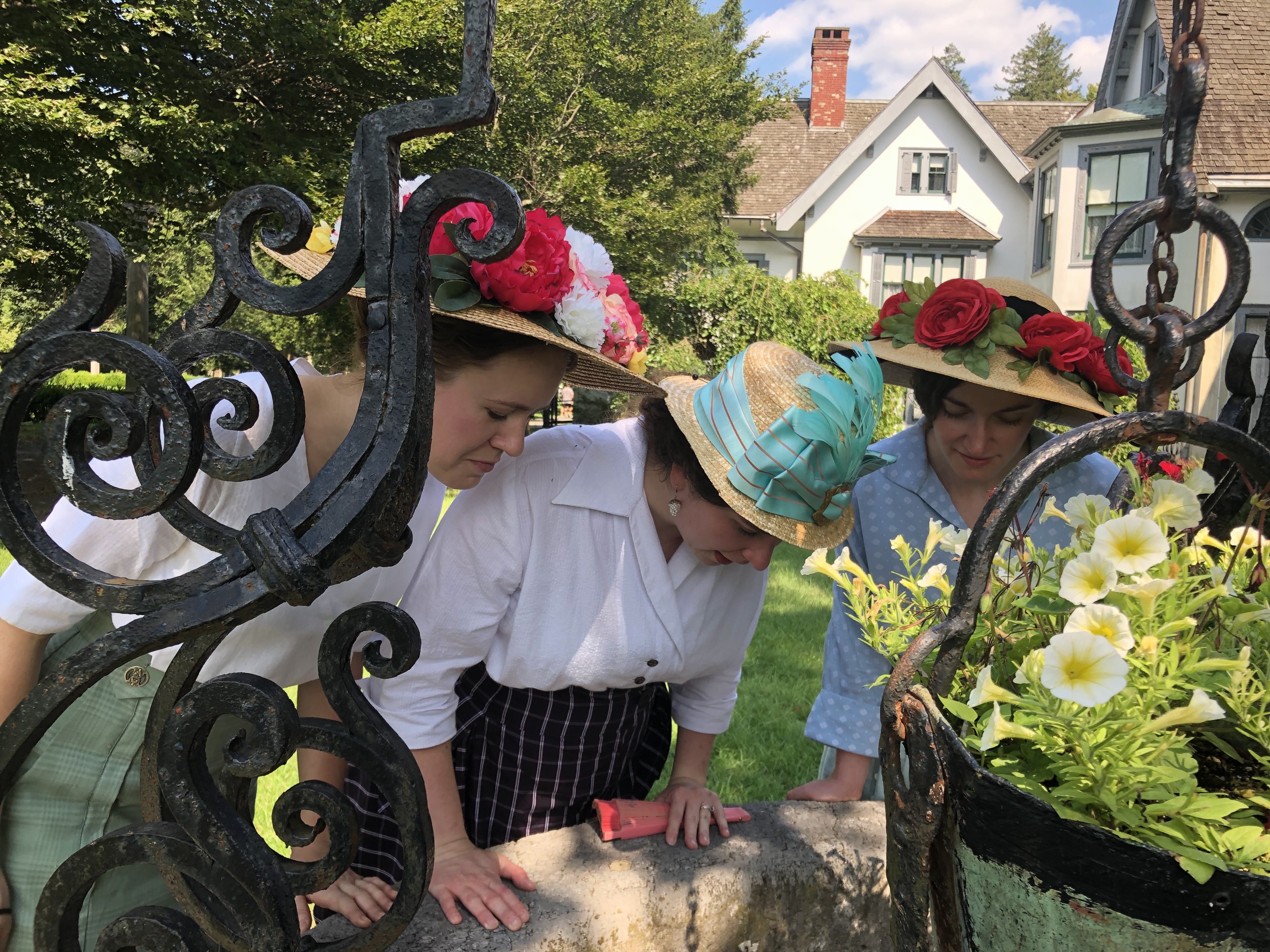 Hellooooo down there! Oh look, it's a real well...