- November 21, 2017
I had very grand plans for this weekend, that as the school semester progressed, kept getting scaled down...and down...til eventually all I managed to make new was one measly bonnet. So this mightn't be the most exciting post for those of you that have been reading here for a while! But I'll do a costume-weekend recap anyway.

Entertainingly-slash-annoyingly, I didn't actually get to wear the bonnet at all, other than the ten minutes I had it on outside while taking pictures of it on Friday afternoon, as we only dressed for the tintype on Friday, and then Saturday was a monsoon so I wasn't about to wear a buckram and silk bonnet outside!

There was an 8-person group of us this year and we stayed in an Air B&B house outside of town (which was an experience...suffice it to say I won't be doing that again. It's a good thing we're a group of very laid-back people who can just roll with it!); we rolled in Friday afternoon/evening, dressed Friday and went to the Victorian Photography Studio to get tintypes, and then went to the Friday night ball at the Gettysburg Hotel. Saturday was another tintype and supposedly the parade, but due to the aforementioned monsoon in combination with other factors, we bought a stack of pizzas and went back to the house to get ready for the Saturday night ball rather than hanging round town and getting wet...ter.

I only participated in the group tintypes, as I've not yet made a dress I want to document that badly in a really period way (they're fabulous and entirely worth the money, but not exactly cheap), but some of our group were tintype fiends, so there are some really great individual ones floating around out there! If you follow Dames a la Mode or Koshka the cat on any social media you've probably seen the group shots, but for those of you who don't, I'll post them here (and for my own satisfaction! I never tire of seeing how the colors look in tintypes vs. in person):
Yes, I do in fact only have one hairstyle...I do that in real life too so it doesn't seem out of character for 1860s me. ;)

In terms of costumes...Friday daywear was the 2014 candy-stripe plaid taffeta dress, and Saturday daywear was the exceptionally boring grey wool My First 1860s dress from 2011(!), which is borderline-embarrassingly-constructed dress...but it's a nice quality lightweight wool, which is good to have since the seafoam/fuchsia flannel dress from last Gettysburg weighs somewhere in the 10-12lb range! Which makes it not really fun to wear when it's any warmer than about 45F.
The bonnet's made from the Timely Tresses Eliza Coretta bonnet pattern - I've been using their patterns for a while now and I have nothing but good things to say about them! Highly recommend. If you know anything about period-correct bonnet construction, you'll know I cheat from that pic! I don't block the tips, and I haven't yet made a wired net brim. (Buckram brims are easy, and I'm lazy.) Also I should have lined the curtain but couldn't find my cotton net, so...didn't. 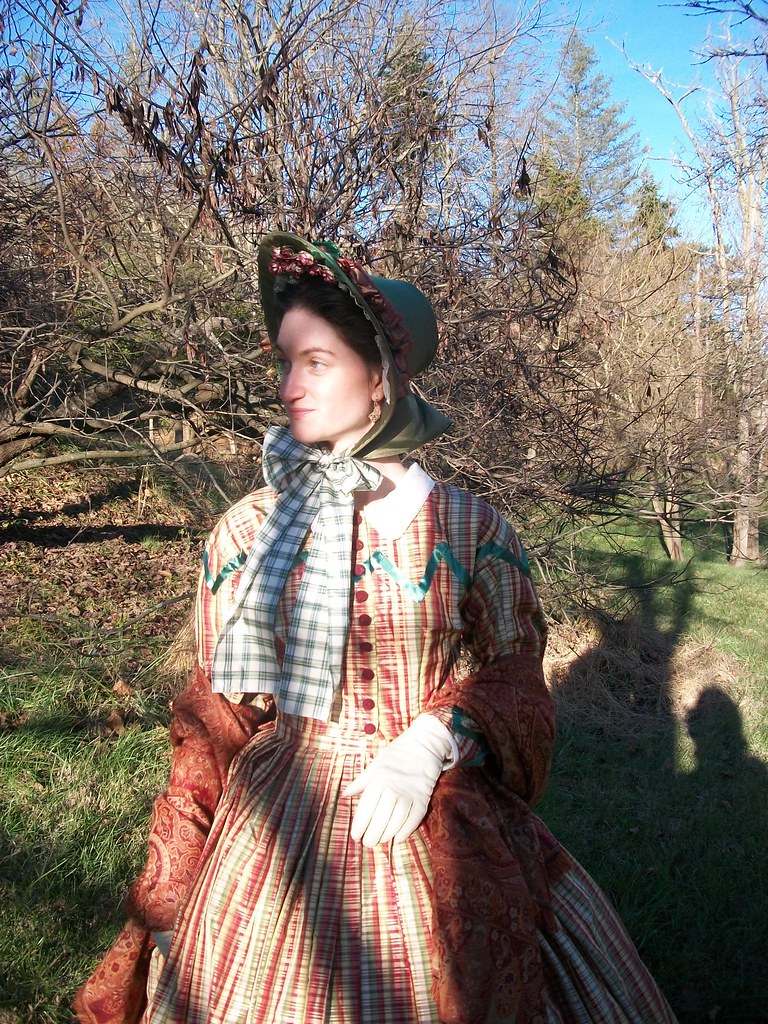 The bonnet's covered in taffeta from SilkBaron, one of my favorite taffeta suppliers (they aren't exactly cheap and they very rarely have sales, but they have free shipping and are consistently high-quality, so they're always the first site I check! This green is actually scraps from my 1810s pelisse..); it's trimmed with paper roses, obnoxiously green ostrich drabs, and more SB taffeta scraps. The ties are plaid silk taffeta that I hemmed; I tend to favor hemmed silk strips over ribbon for ties, partly because you can't get silk ribbon for cheap nowadays, and there's much more variety in fabric! 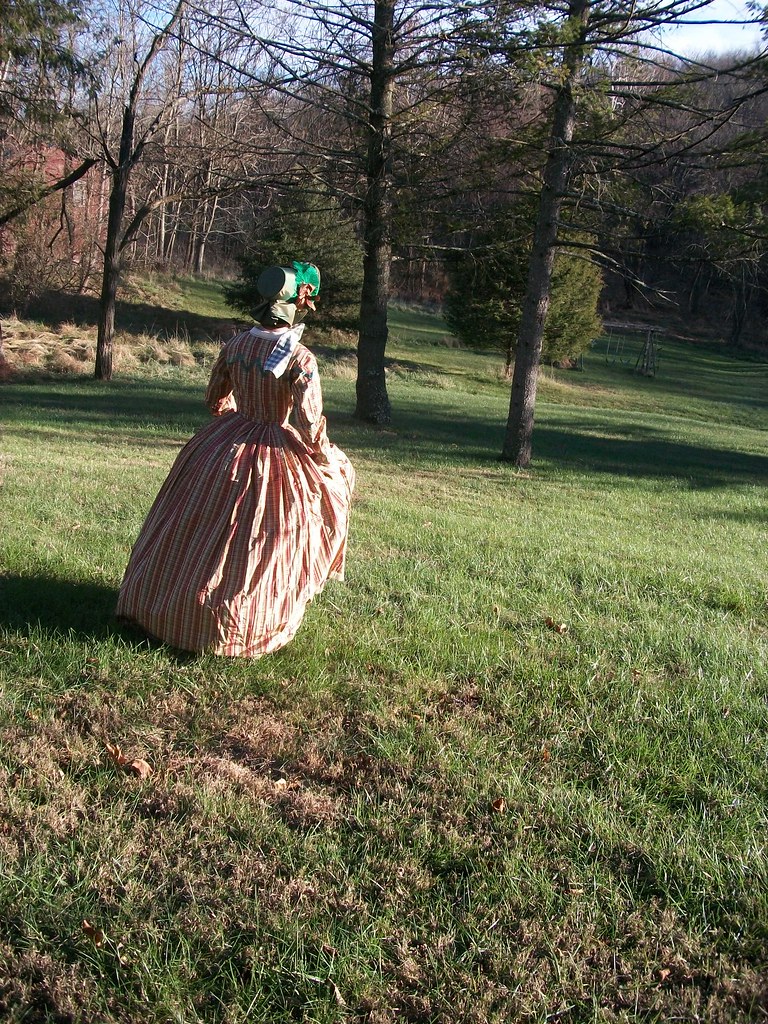 Friday night's ball had a fancy dress theme; I punked out on my starry night dress with a week left til Gettysburg and way too much schoolwork to do, which I didn't regret in terms of keeping my sanity, but which I regretted in terms of not being half as adorable in short dresses as the other ladies!
I wore my ancient Venetian gown over my hoop and 1860s corset (seriously, it's ancient. I made it in fall 2006 and wore it to the renfaire for a few years, back when we still went to that fairly regularly), which passed muster but wasn't anything exciting. 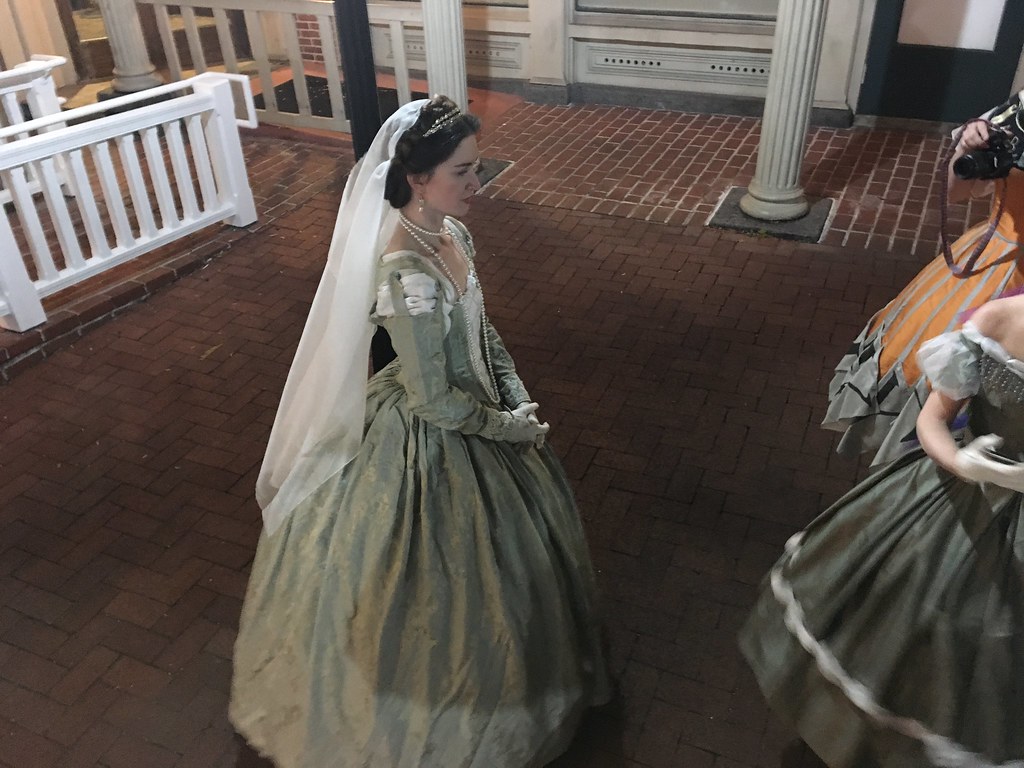 Although I guess it's exciting that I still fit in something I made eleven years ago! 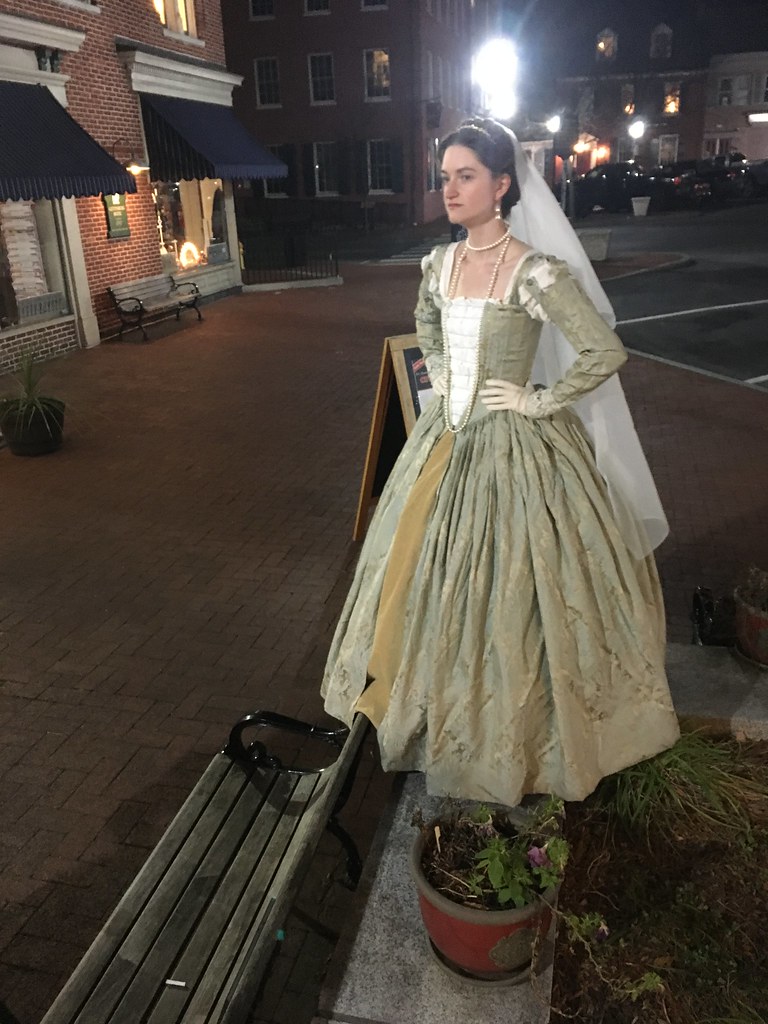 (And if the wrinkles look like it's been in a plastic bin since 2008...that's because it has.)

Saturday night was the Prince of Wales/"crystal" ball, where light-colored ballgowns, tiaras, white flowers, and generally sparkly things were encouraged. Oh-so-conveniently, my current ballgown is silvery satin, so it fit the theme perfectly!
Somewhat less conveniently, the thing weighs a TON, and I had a "I ripped my dress AGAIN?!" crisis after the second dance...just like last time I wore it. This time the flounce got stepped on and about 6" of stitches holding it on ripped out. Thankfully Alice came through with a couple of safety pins, but I really don't enjoy waiting for the next wardrobe malfunction with this dress! I love how it looks in videos of the dancing, but I'm not sure it's worth the trauma. :P 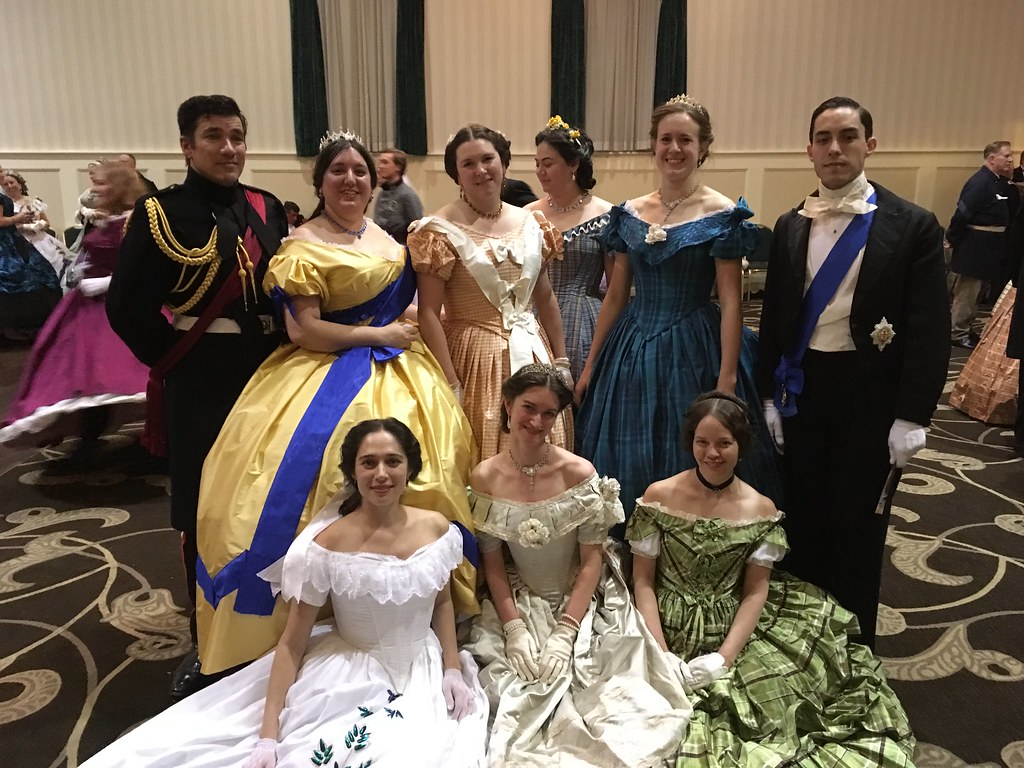 HRH the Prince of Wales deigned to come to our little Gettysburg ball, and very generously favored me with a reel (I "swooned" over him and his entourage when they entered, landed on a hoop steel, and still have a very nice bruise on my hip from that...so I told him he owed me, LOL. Sad that there are probably no pics out there of that, because I'd love to see how silly it looked!)...and we all did the last Virginia reel of the night together. We're definitely a group of energetic reelers..."why yes I did just fling the Prince of Wales across the set! why do you ask? wheeeeeeeeeee!" etc etc.

Hey, what's the fun in dancing in a satin dress over a hoop if you're not bouncing all the time? No fun at ALL! 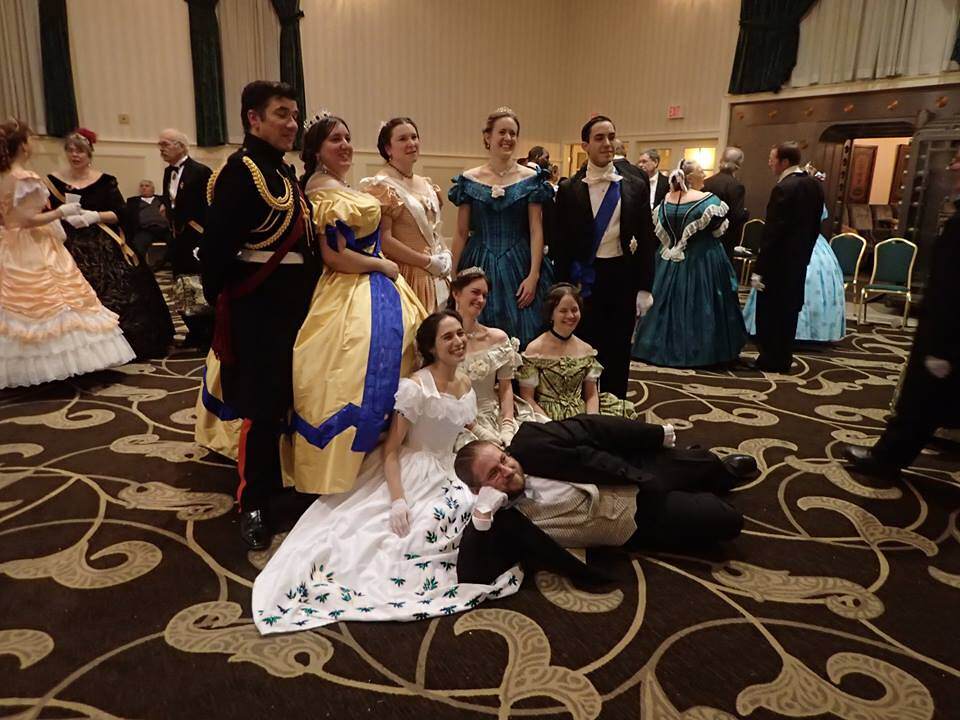 And really, that was it! Lovely weekend, that my calves needed two days to recover from (oof, those reels)...