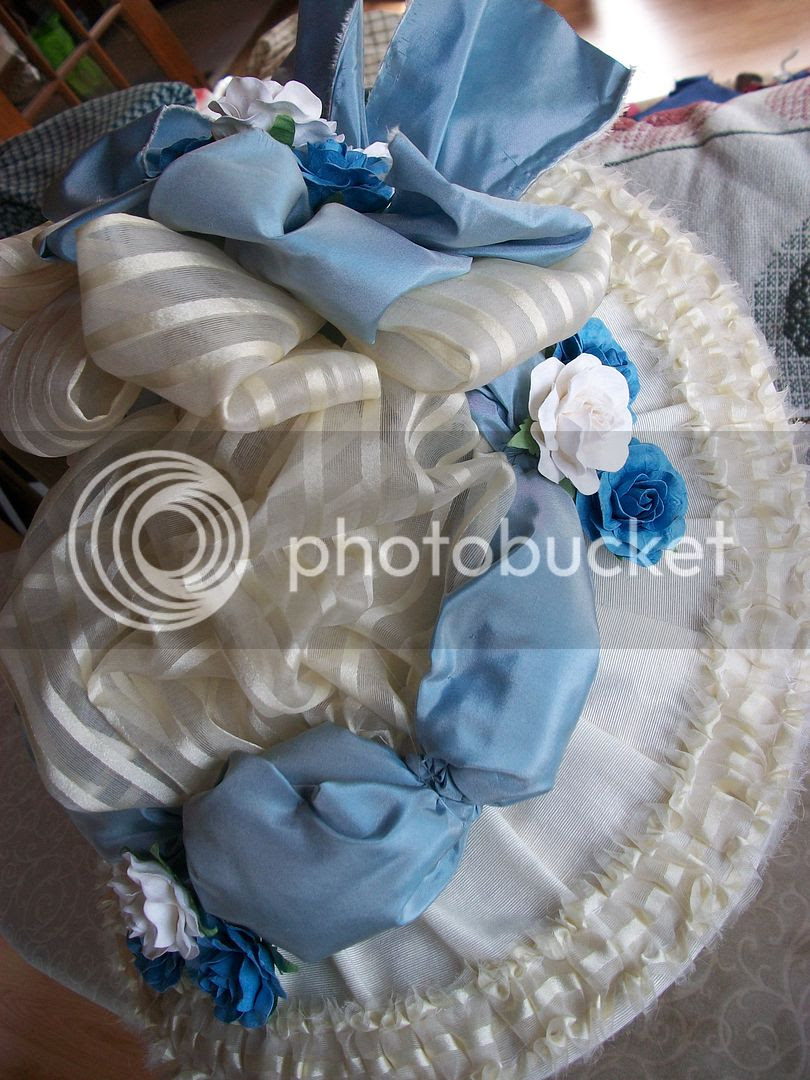 Originally 18th Century Big Hats said 1780s to me, but after careful consideration of costs and time, I decided to go with my old standby, 1770s, instead. I'm not much of a frou-frou kind of girl in general, but for some reason I make an exception for those ridiculous 1770s meringue-like confections! (Jenny La Fleur's pinterest boards have been invaluable to me...she's so well-organized!) Not to mention I had a perfect 18thc cotton print in the stash. 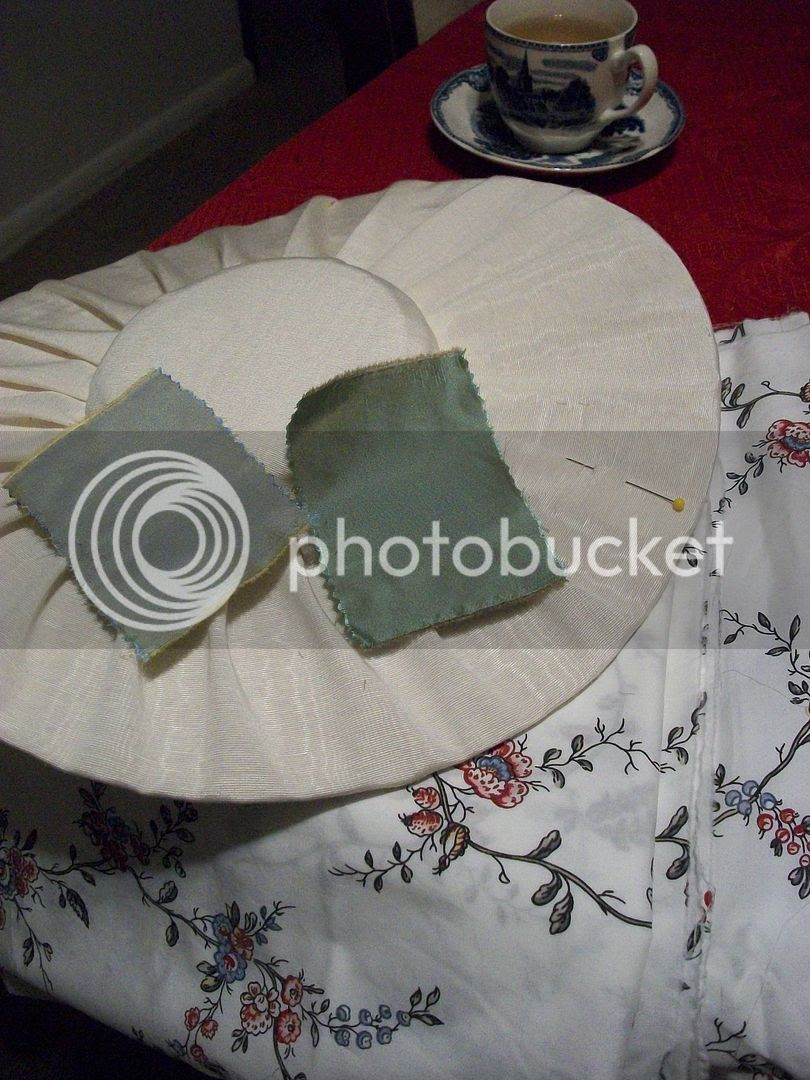 Yes, it's an Ikea duvet. Just enough for a gown and petticoat, as the reverse was a different striped fabric, and I got a king-sized set.

A fluffy "shepherdess" hat requires much less engineering than a big 1780s hat, so this one took me comparatively little time! I got it mostly covered in one evening. It's a straw base that's made from a cheap straw hat I took apart for the braid and resewed YEARS ago. Originally I'd covered it in, um, polyester shantung. Thankfully that never actually saw the light of day, and it was simple to rip that off and recover it with a mostly-cotton moire scrap from the stash. 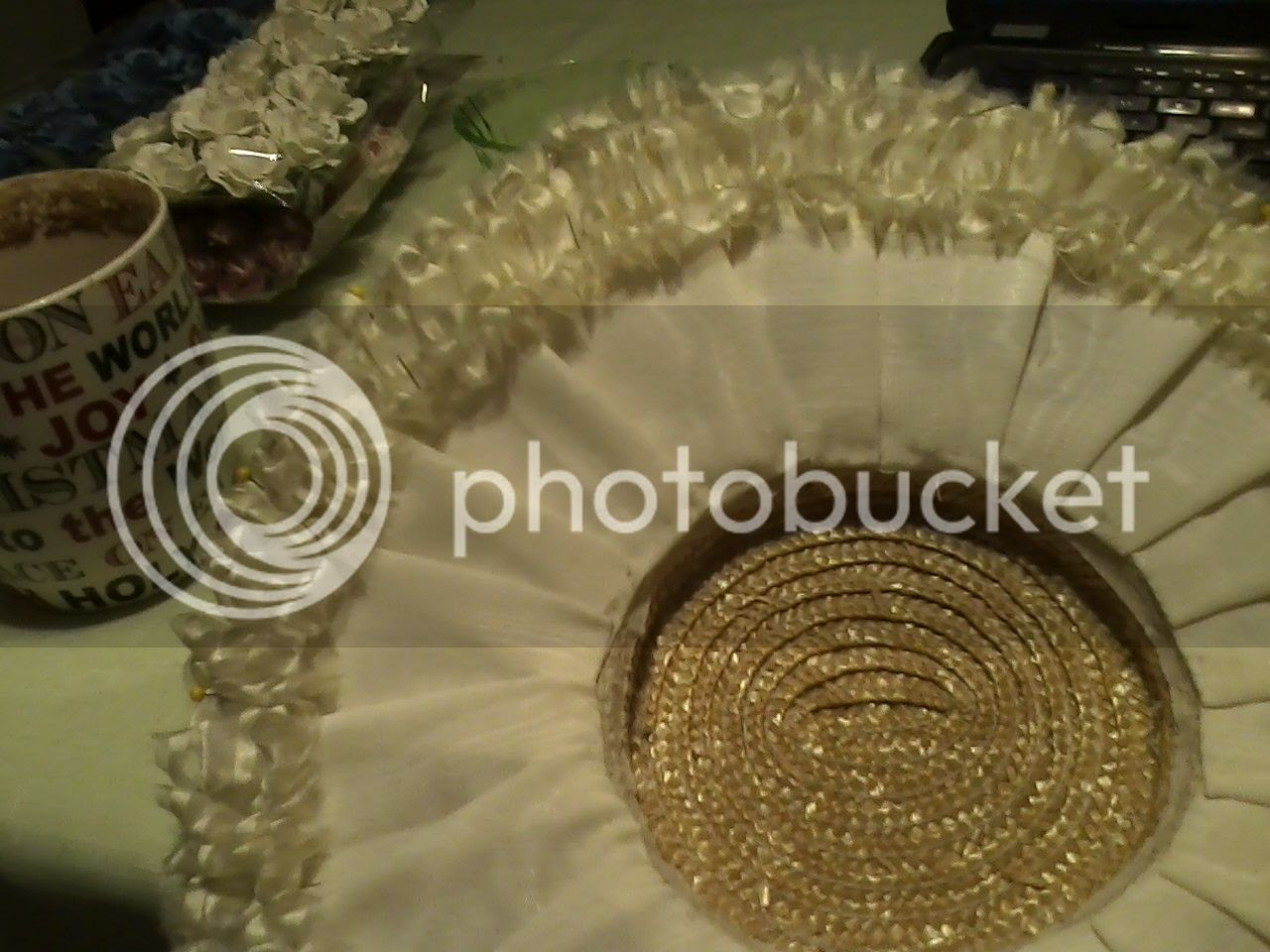 Not that you can see much of the base covering now! I piled satin-striped ivory silk organza, blue taffeta, and paper flowers on top of it til it looked like a ridiculous wedding cake, which was how I knew it had been trimmed enough.
Broken down, the trim is: a band of gathered organza on both the top and underside of the brim, a tube of taffeta stuffed with wool batting and scrunched down at intervals with thread, a big circle of organza gathered round the edge and tacked to the taffeta "doughnut", blue and white paper roses at intervals sewn on, and blue taffeta bows on the back of the brim, under and upper sides, while the upper side also is backed with an organza bow.

And keep in mind that it'll be worn much more vertically over 1770s hair (and probably a cap), which just adds to the absurdity, but which is basically impossibly to display on a little styrofoam head. Stay tuned for the full outfit!
18thc:hat