- May 05, 2016
With truly dismal hair, for which I apologize! I really thought I had a wig that would work with minimal tweaking (the tweaking needed was not minimal), and I didn't want to go to the trouble of setting all my hair last night for a ten-minute shoot (this is still valid, in my books)! So...just try and ignore the hair. 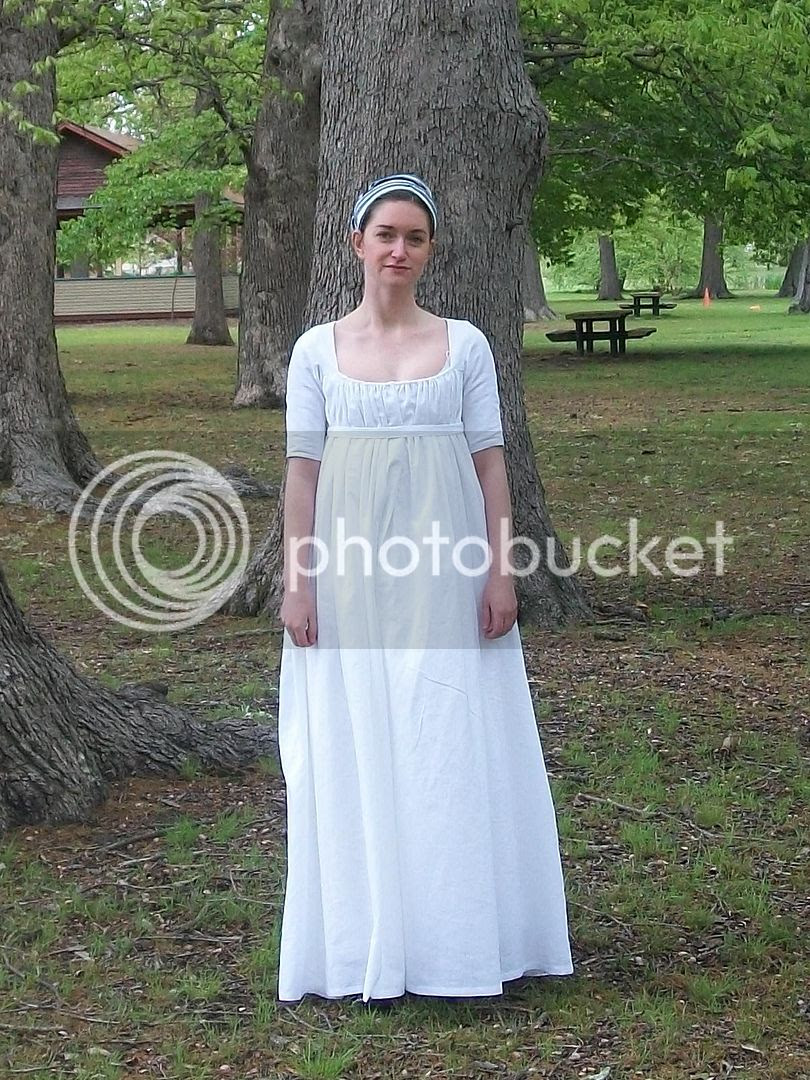 I'm having a Regency/1790-1820-themed picnic in a few weeks, and of course I wanted something new! Specifically, a mid-1790s open robe. Which, obviously, this is not, but I need something to go under the robe. I'd put it at about 1795, because it's obviously quite high-waisted, but hasn't yet moved to the (more flattering by modern standards, ahem) flat-fronted "standard Regency" gown that you start seeing about the turn of the century. And it's still worn over a very 18th-century foundation.


So, round gown, which, despite the bad hair, deserved an attempt at pics on its own. I say "attempt" because everything being blinding white doesn't make for stellar pics! 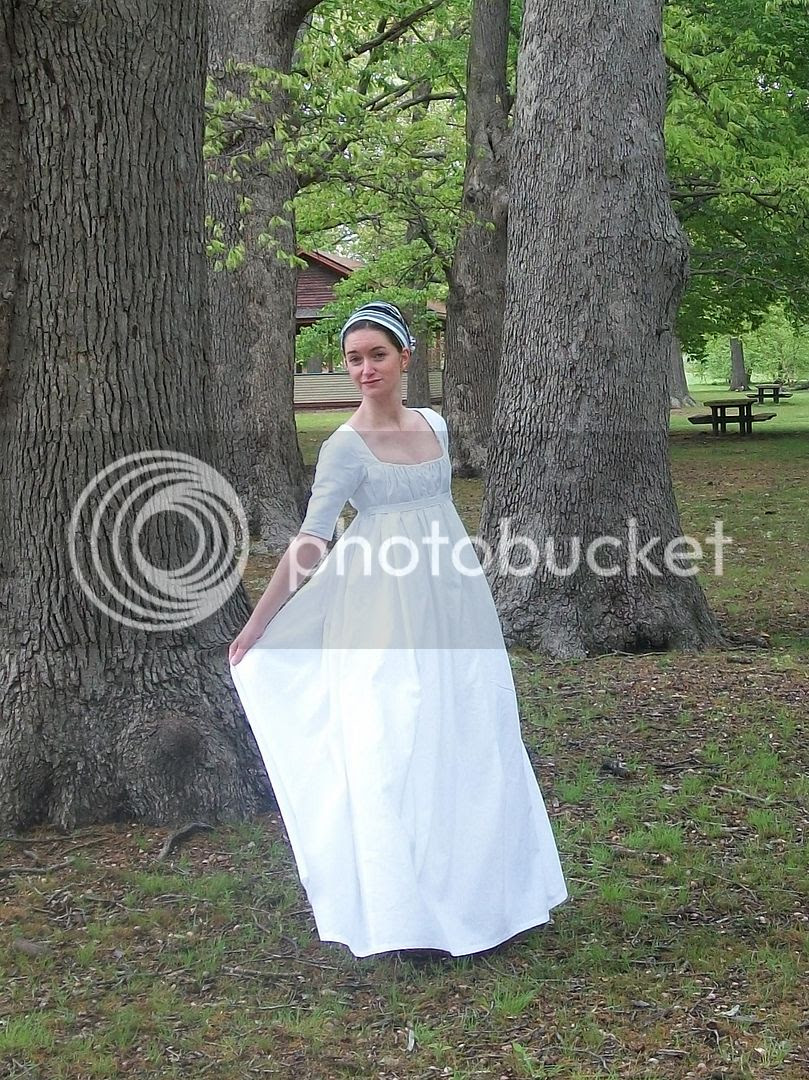 But you at least get the idea. 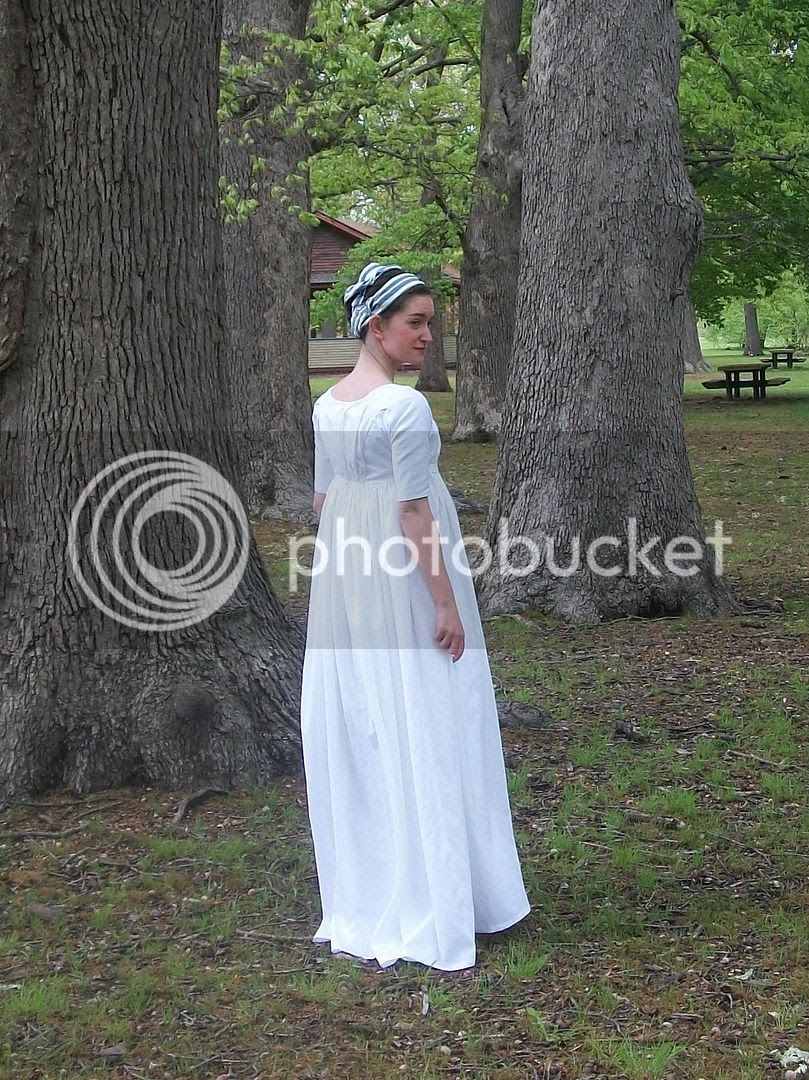 And it was really cold this morning so I didn't feel up to hanging around the park trying for better pictures! Well - upper 40s(F), which I'm happy with when I'm properly dressed! 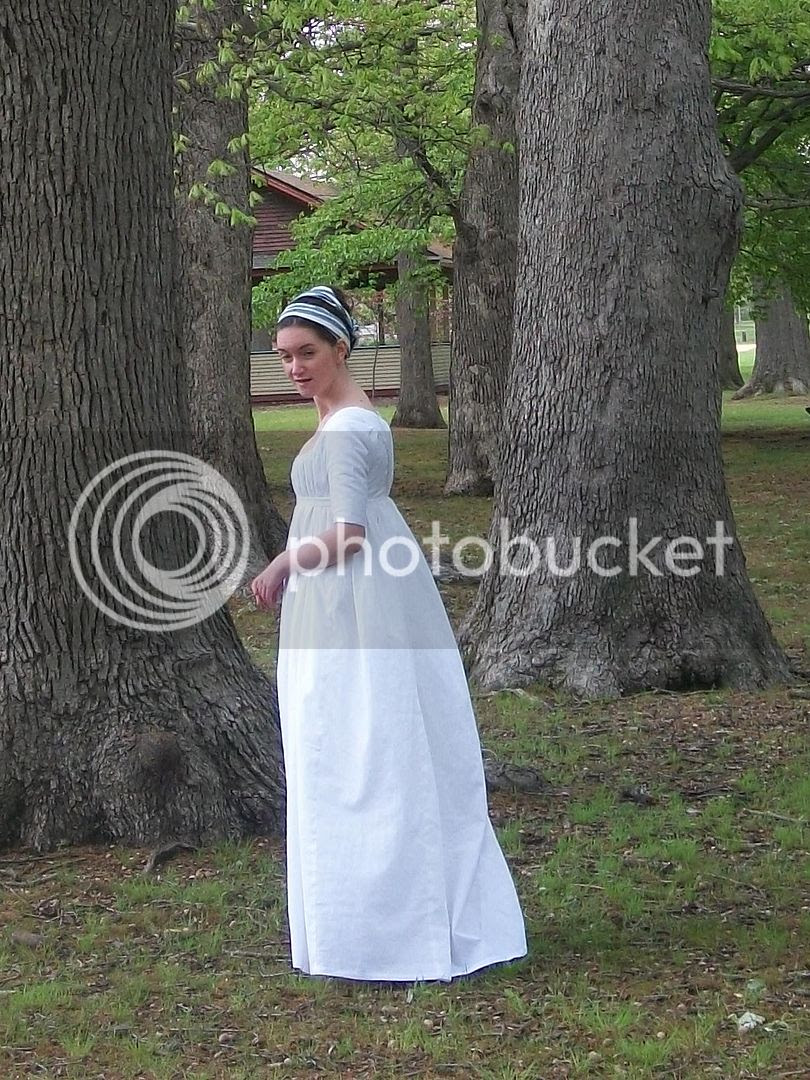 This did not count as properly dressed. Brrrrrr. The dress will almost always be worn with a fichu, and filling in the low neckline does a lot to keep one warm - but the fichu's white, too, and that wouldn't be helpful on this particular occasion! 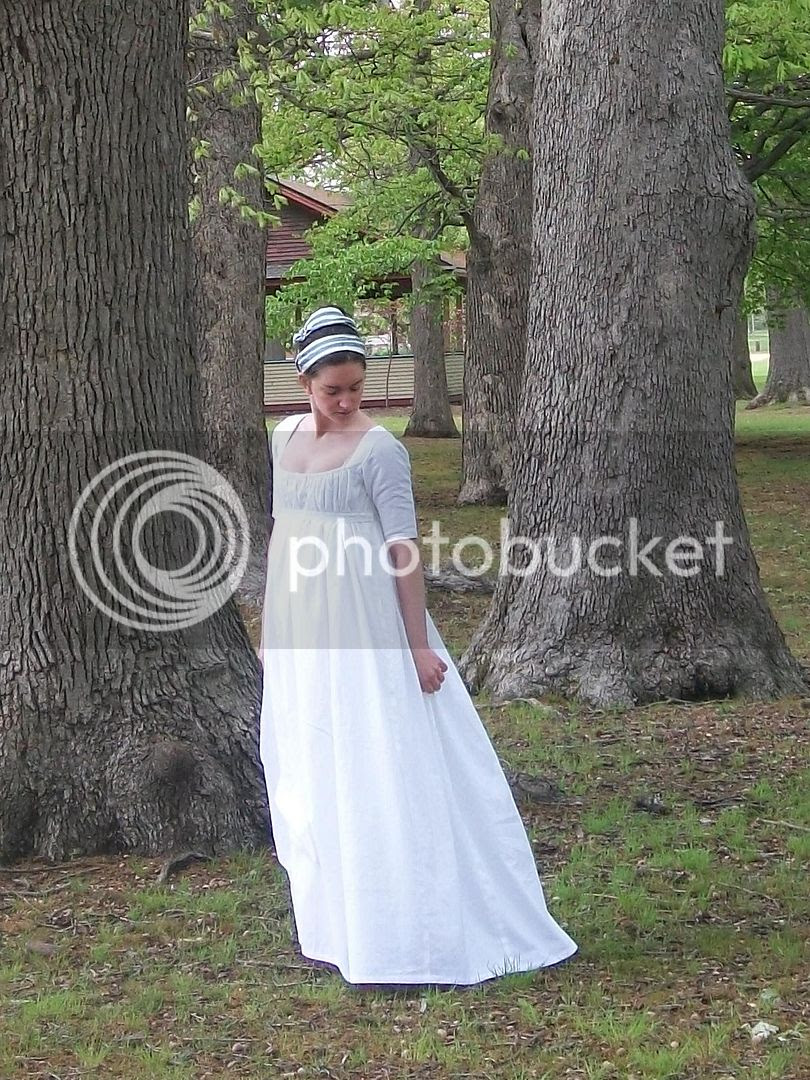 I gave up and came home to take the how-it-fastens/detail shots... 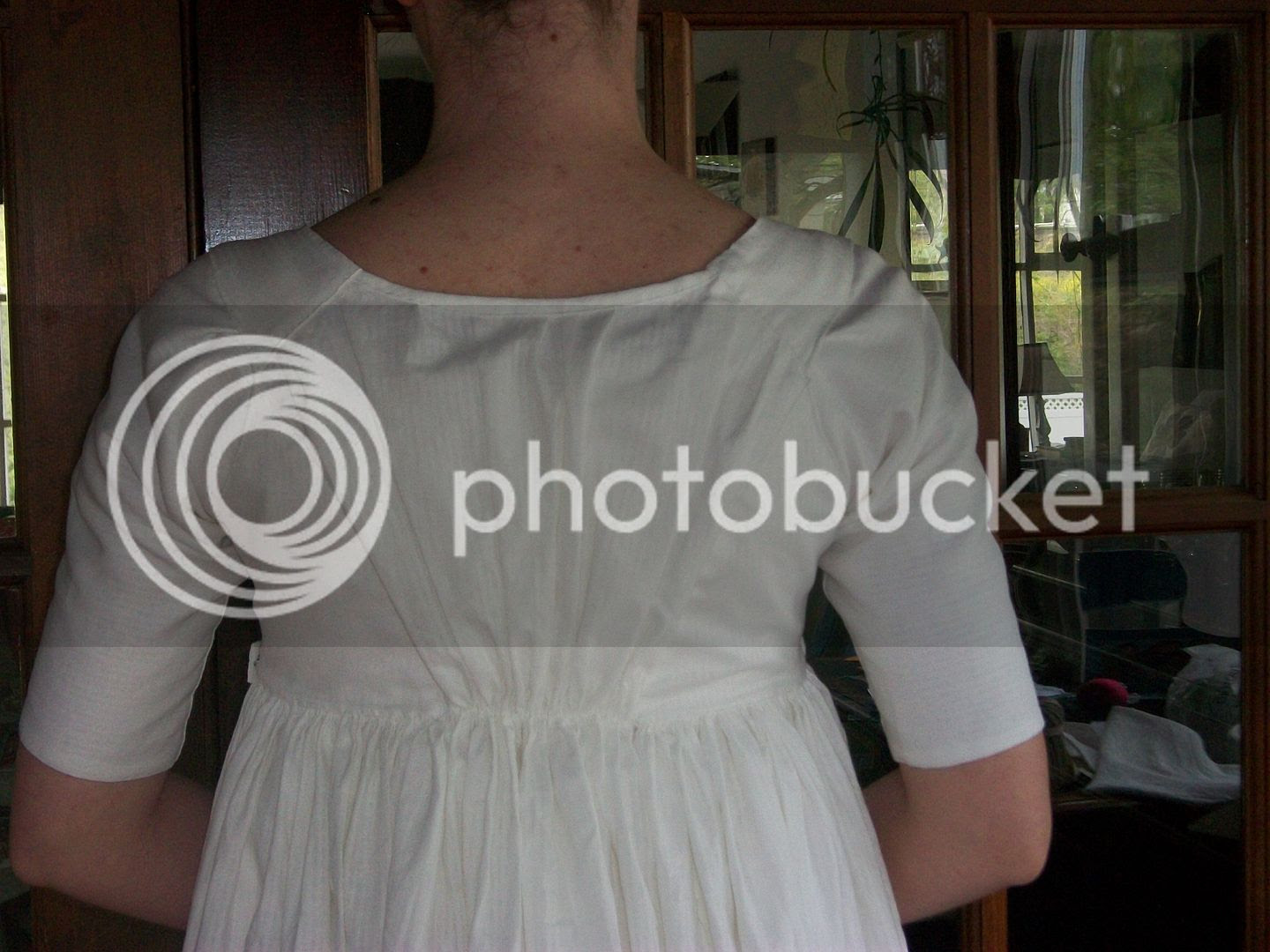 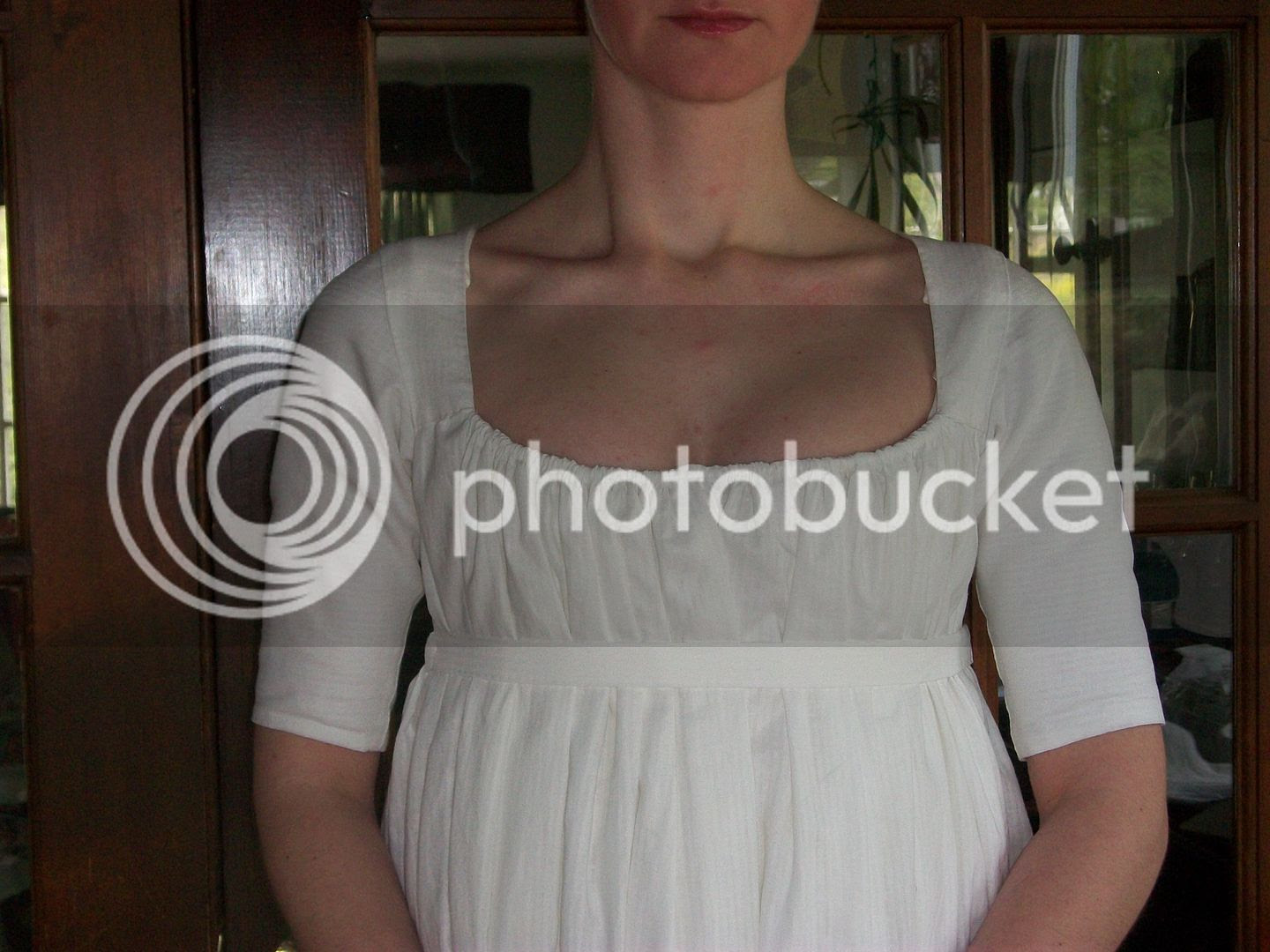 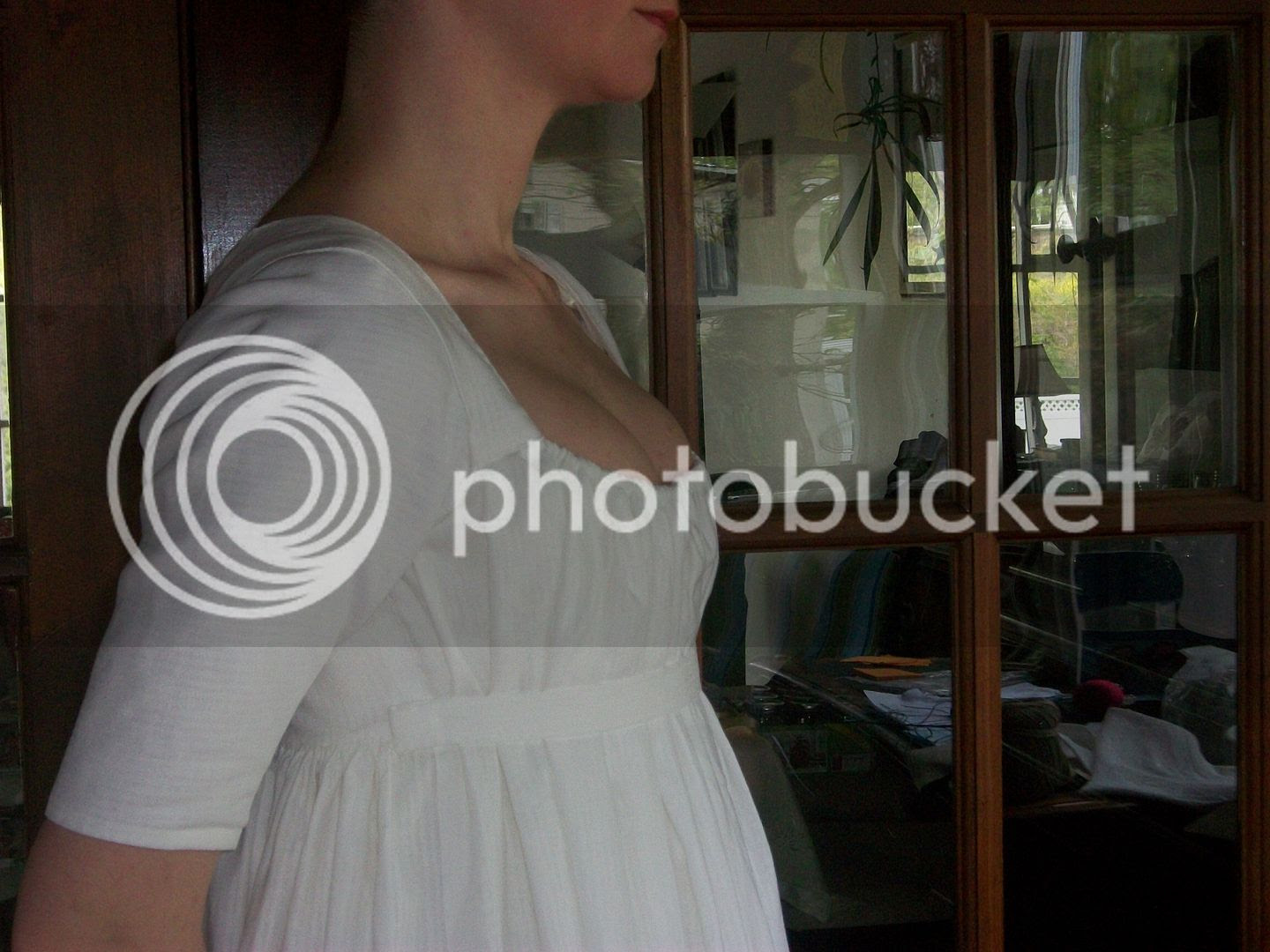 In terms of closure (and construction, really!), this really is just a slightly updated version of the 1780s chemise gown: it has a fitted lining that pins closed in front, and the dress draws up on a string at the neckline.
And I could have put another drawstring in at the waist, but I decided it was easier to make a front waistband instead - it's sewn down on one side, and hooks at the other. Holds the front panel in place just fine, and took much less time than another channel would have! Win-win. And now some dress construction. First off, it's not based on any particular garment. This is more of a big ball of "what I know about 18thc construction, and what I know about Regency, and where they meet in the middle." Plausible, but not necessarily documentable. The bodice and sleeves are lined in white linen, the dress fabric is a very subtle self-stripe 55/45 linen/cotton blend. (It's so subtle I don't think you can see it in any of the pictures! Heh.) 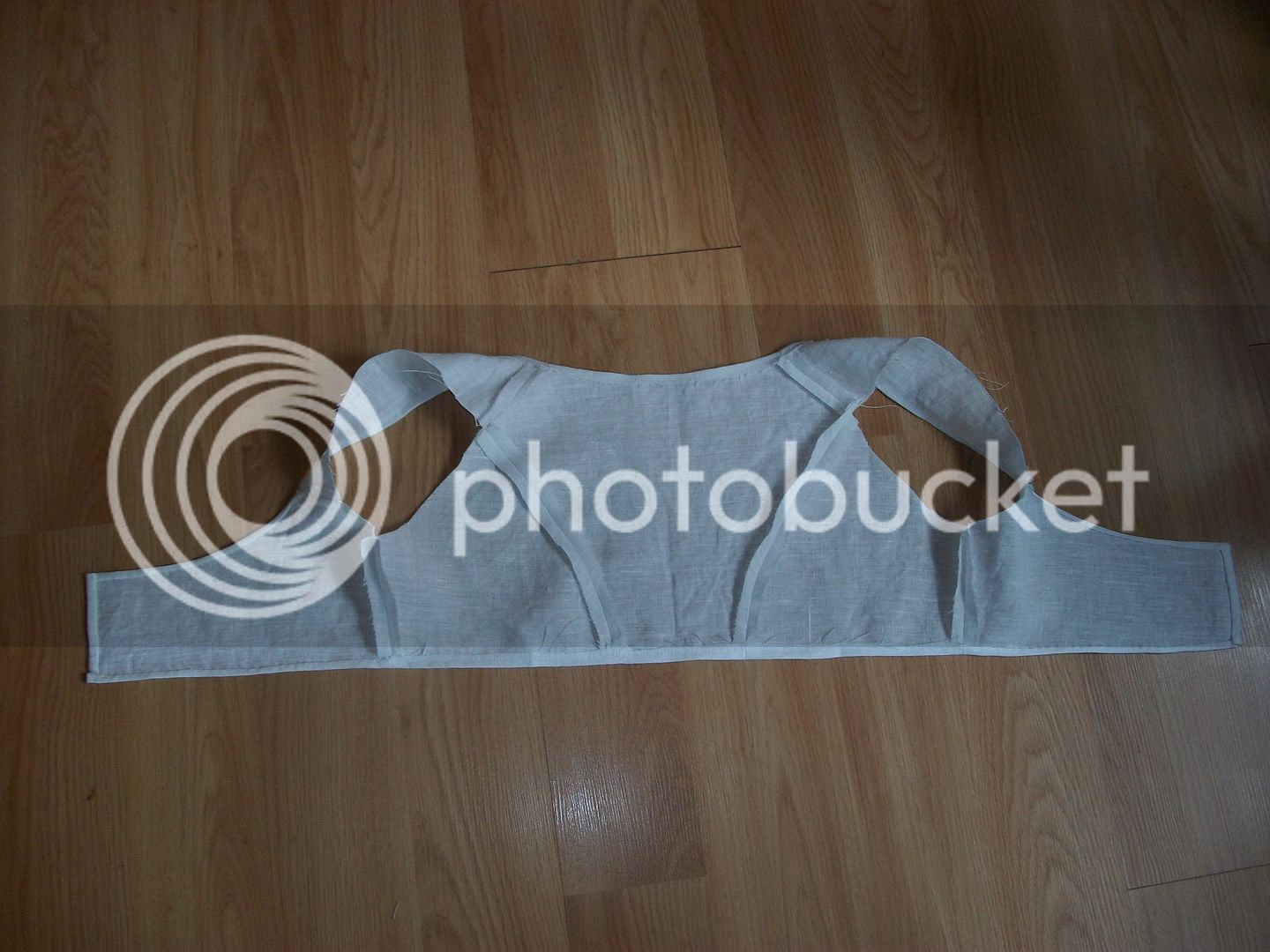 First I made the basic fitted lining. It's machine-sewn...I did a bit of machine work on this dress, but nowhere you can see now that it's done! 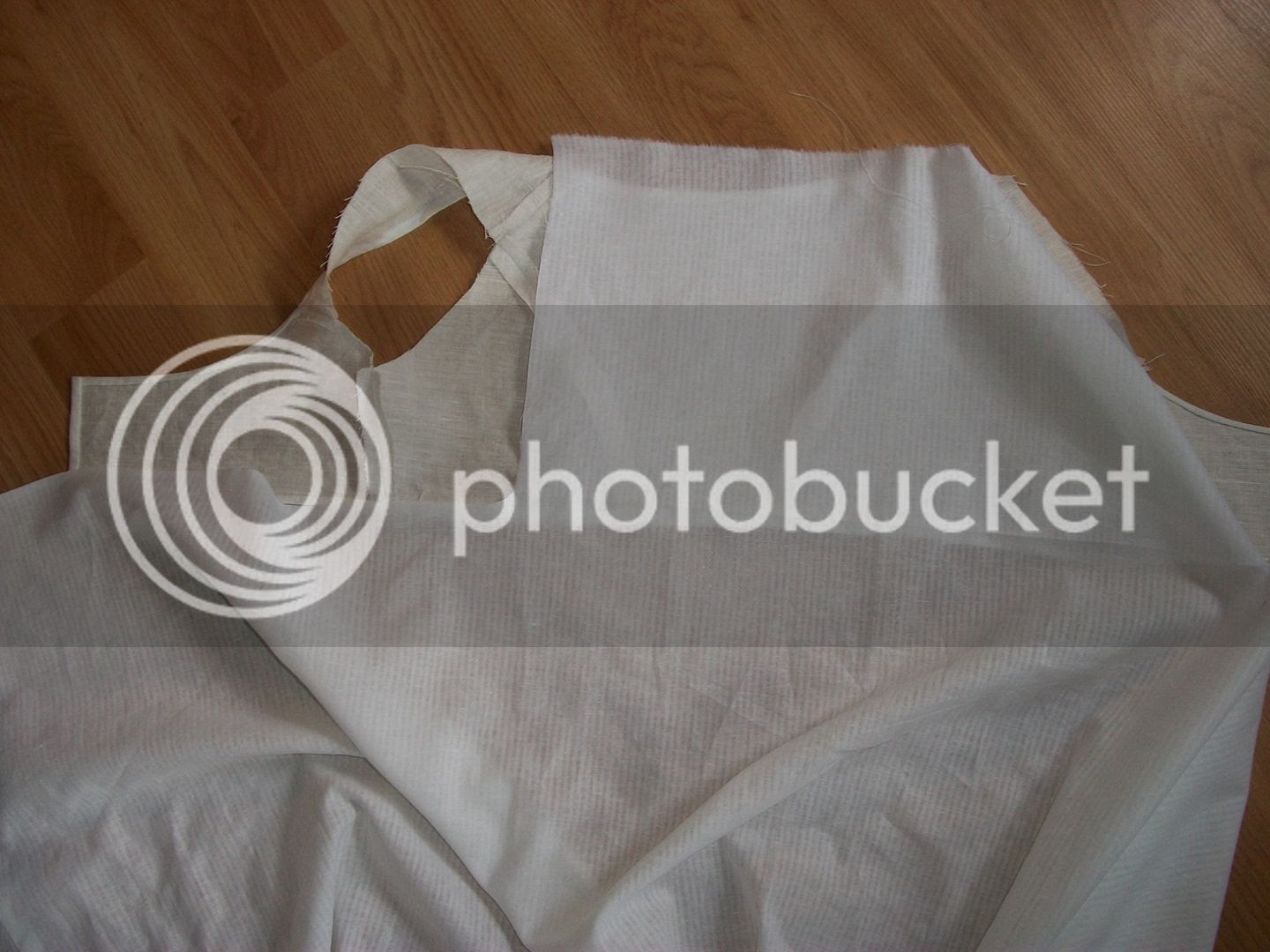 The dress is made up of 2.5 panels of 53" fabric - 1 panel in the front, 1.5 for the back. The center back is one length of fabric, neck to hem, similarly to an "en forreau" gown from earlier in the century.
I then gathered up the rest of the back section and basted the skirt to the bodice, then topstitched the side-back bodice pieces over that. 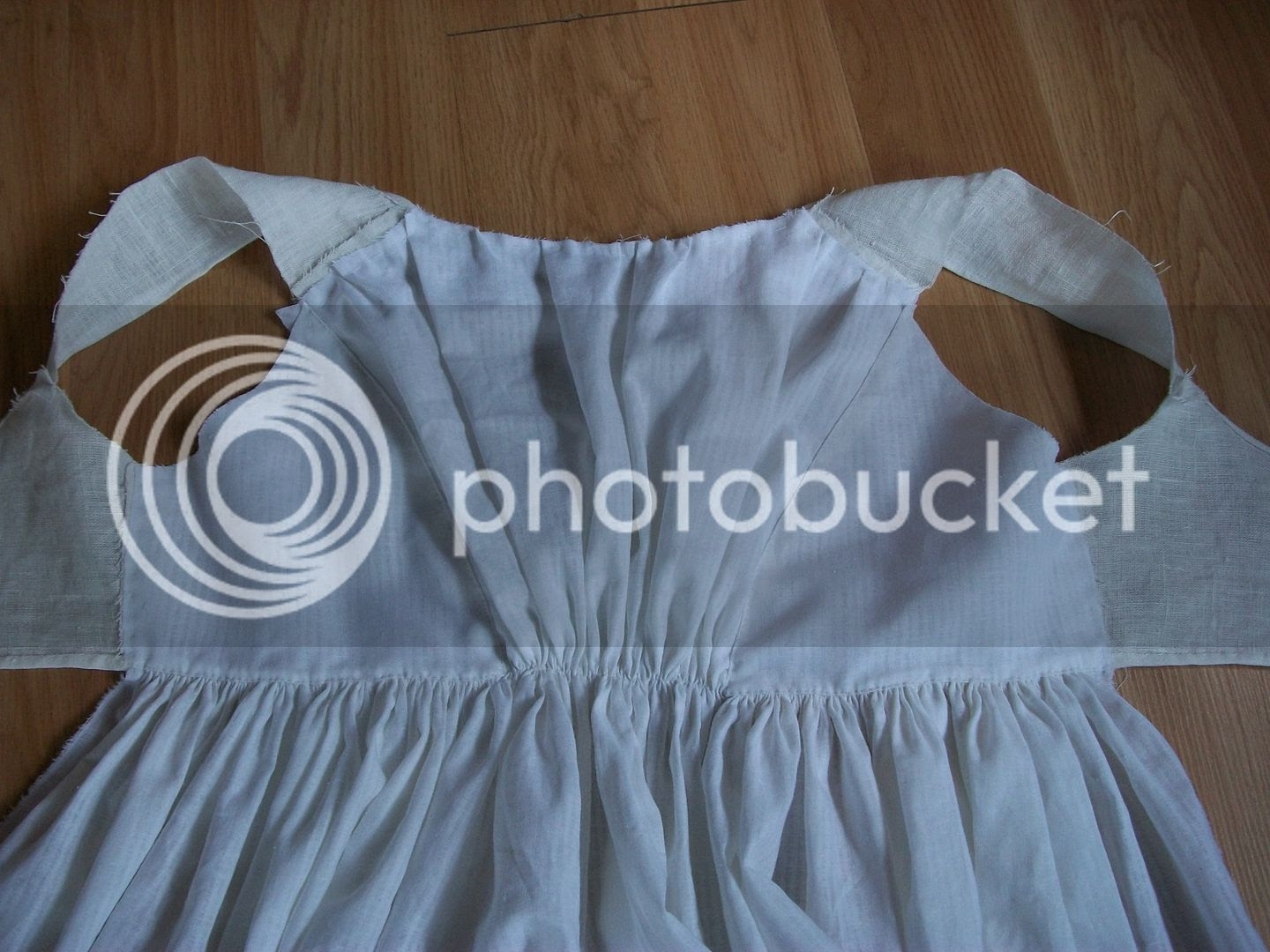 The front is just one big rectangle of fabric - I pleated it down a bit in that little space between the side seam and where the drawstring would start at the edge of the neckline, so as to avoid that weird little flat space I got (and didn't like) on my yellow silk chemise gown. 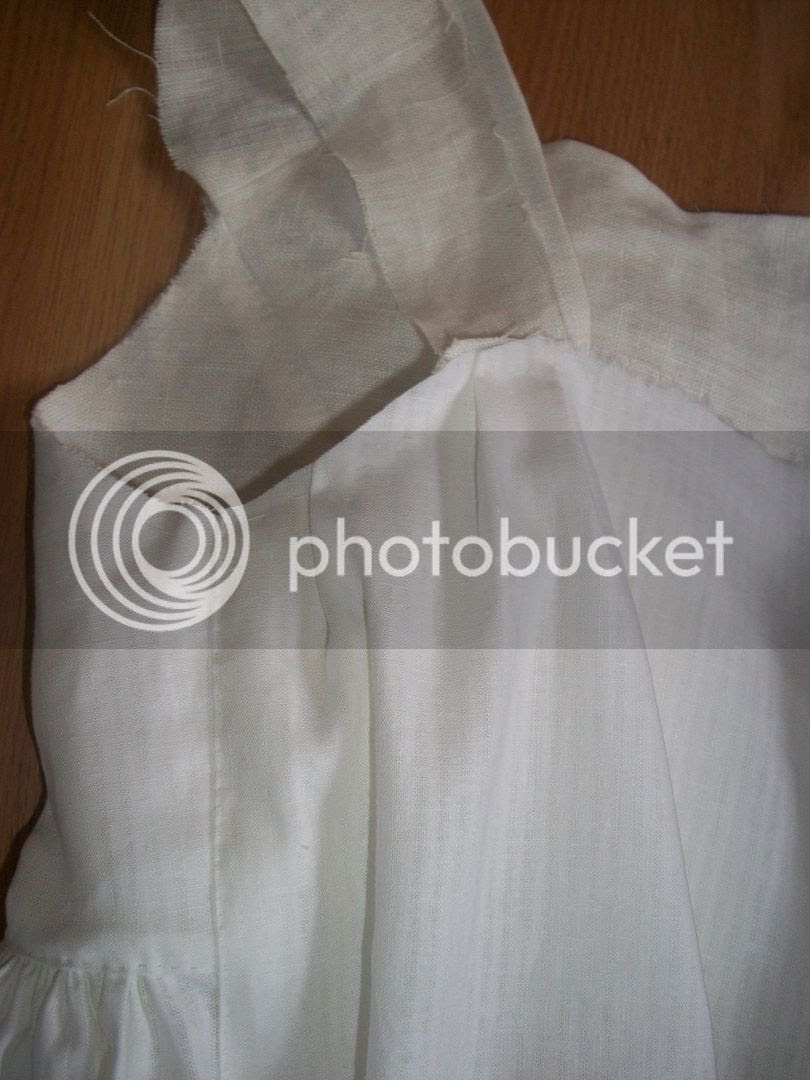 Then I sewed the drawstring channel and topstitched the shoulder pieces on, and that was just about it! Apart from the hem and sleeves (which are my pink sacque sleeves, just cut a little shorter, nothing remarkable).

I'm wearing it over my neoclassical bodiced petticoat - different from my Regency petti because it's got a pleated rather than flat front! not particularly slimming - and my mid-1790s stays, which are a mashup of the two 1790s stays in Corsets and Crinolines. They're shaped like your standard last-quarter-18thc stays, just with the tabs cut off to make them higher-waisted, and with a small bust gusset put in. (I made them 5 years ago and never made a dress to go with - the construction isn't great but happily the shape is good!) And they have the silly padded balls attached to the back! Which look entirely ridiculous but do in fact support the skirt.
18thc: mid-1790s round gown