One of my good friends has connections, you guys. She'd been told about a project for an historic house, but as it wasn't really her thing, she passed it on to the rest of us. And since it seemed to be totally my thing, I jumped on it!

It's for the Whitall House at Red Bank Battlefield in South Jersey. The owners of the house in the 18thc were the Whitalls (you'd never have guessed that, right?), well-to-do Quakers. Ann Cooper Whitall famously refused to leave her house during the battle, and supposedly she was spinning when a British cannonball blew right into her room; she took her work down to the basement and kept spinning. Well, it's a good story, anyway!

Anyway, in the records, there's a 1760s advert for a runaway indentured servant, Mary Heany. As is usual, there's a description of what she was wearing when she ran away. They wanted somebody to make a reproduction of an outfit from this description, and, hi! that's now me.

The Pennsylvania Gazette
November 25, 1762
Title: Ran away from James Whitall, of Red Bank, Gloucester County,
An Irish servant girl named Mary Heany, short and thick; had on when she went away, a
lightish colored jacket, an old black quilt, brownish striped petticoat, blue yarn stockings,
and neats leather shoes with buckles in them. Whoever takes up and secures said
servant so as her master may have her again, shall have thirty shillings reward and
reasonable charges paid by James Whitall.
N.B. Any person that conceals said servant shall be prosecuted as the law directs.

I haven't got any exciting pictures to show you yet, because I haven't got the fabric yet; most of it was ordered online, and the rest of it I'm just waiting to go off sale at work so I can use a better coupon!

Since we're trying to save money wherever we can and they don't have a mannequin or anything to display the outfit, I said I'd make a duct-tape form. I'd never done it before and it sounded like an adventure! I found a willing victim in a friend who's a bigger size than me (also taller, but as I put it, "We'll just chop your legs off!"), and we taped her all up one afternoon recently.

The form is mostly done, minus the fabric covering and stand. I tried wrangling one myself, but dang, she's heavy. Too top heavy for cardboard; she kept tipping over. I've had an offer for something a little more legit made out of 2x4s, so she should be fine. 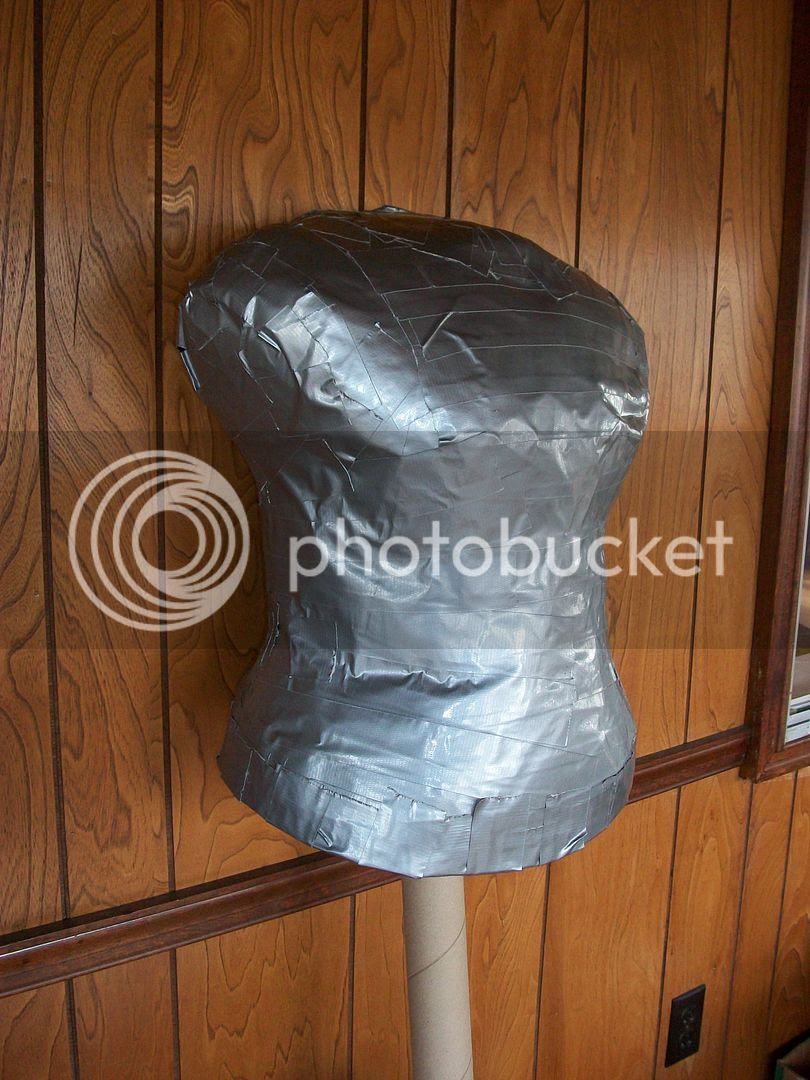 She got a little dented on the car ride back home the day we made her, as you can see. She was a little prone to warping before she got stuffed, but this doesn't need to be an exact copy of anybody, so it doesn't matter. She's stuffed with approximately a million plastic bags and the piece filling in her bottom is the top of a pizza box. Creativity!