As mentioned in the lavender plaid post, I figured I'd break this down separately, as it would be too long as one very big post I think! Here we have a What To Wear Underneath Your Turn-of-the-Century-Outfit Post: in my case, shoes, stockings, chemise, drawers, corset, corset cover, and petticoat.
Yes, it sounds like a lot if this isn't what you do on the weekends and aren't familiar with it, but with all natural fibers it's really not bad. Of course you sweat, but it's not like wearing a load of nasty polyester that doesn't breathe! Plus I firmly subscribe to the "if you're spending a day in the sun it's better to cover up" line of thinking. And at a certain temperature, "we're all hot...bet you're hot too" is our answer to inquiring minds who want to know!

I had a petticoat and combinations for the period already, but since this was an event planned for outdoors, in the Philadelphia area, in August...I wanted to keep everything as lightweight as possible. The aforementioned petticoat and combies were made to wear outdoors in February, so they were a little bit on the warmer side...


I made my chemise and drawers from linen, because I've been costuming long enough now that I've found firsthand how much better linen wears than cotton. Like, it really is worth the higher cost of the linen fabric if you plan to keep wearing your costume bits intermittently for a decade (which is the kind of wear mine get). I'm still perfectly happy to make petticoats from cotton, but body linens? Linen. (And yes, this is one instance where I completely disregard what they did in the period - at some point during the 19thc there's a switch to mostly cotton for chemises &tc...but I don't care. Linen for me, thank you.)
I used a chemise pattern from Fashions of the Gilded Age, Vol. 1 by Frances Grimble...which, you may notice, is not turn-of-the-century, strictly speaking. But The Voice of Fashion, which is the actual turn-of-the-century book, only has one chemise pattern and I didn't like it, so Gilded Age it was! Not a huge difference in chemises, really... 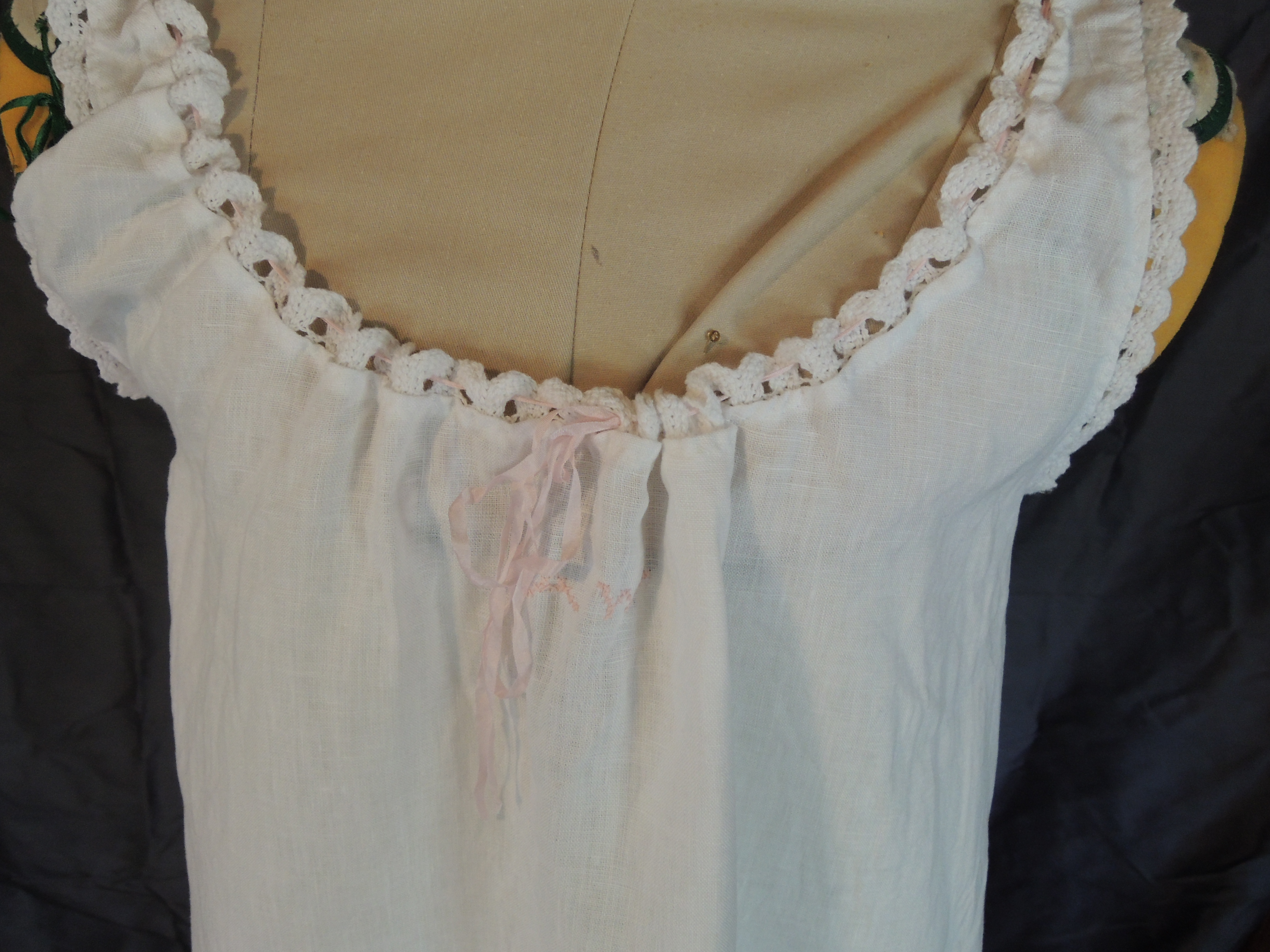 It's trimmed with VERY cheap cotton lace. Kind of ugly, but it works well enough. And I got enough of it to trim the chemise and drawers for about $10. I'm happy to pay for nice lace when it's visible...but this isn't visible. I wouldn't even bother trimming it, except that if you go by period adverts it must have been illegal to have untrimmed underwear, LOL. (It's ALL TRIMMED or embellished or has insertion or...all of the above.)

I did use the 1901 drawers patterns from Voice of Fashion, and actually scaled them up properly, with the little rulers and everything. It's like connect-the-dots...it's fun! Ish. They're entertainingly dumpy sans trim:
Definitely improved with some Cheap Lace and a little ruffle. 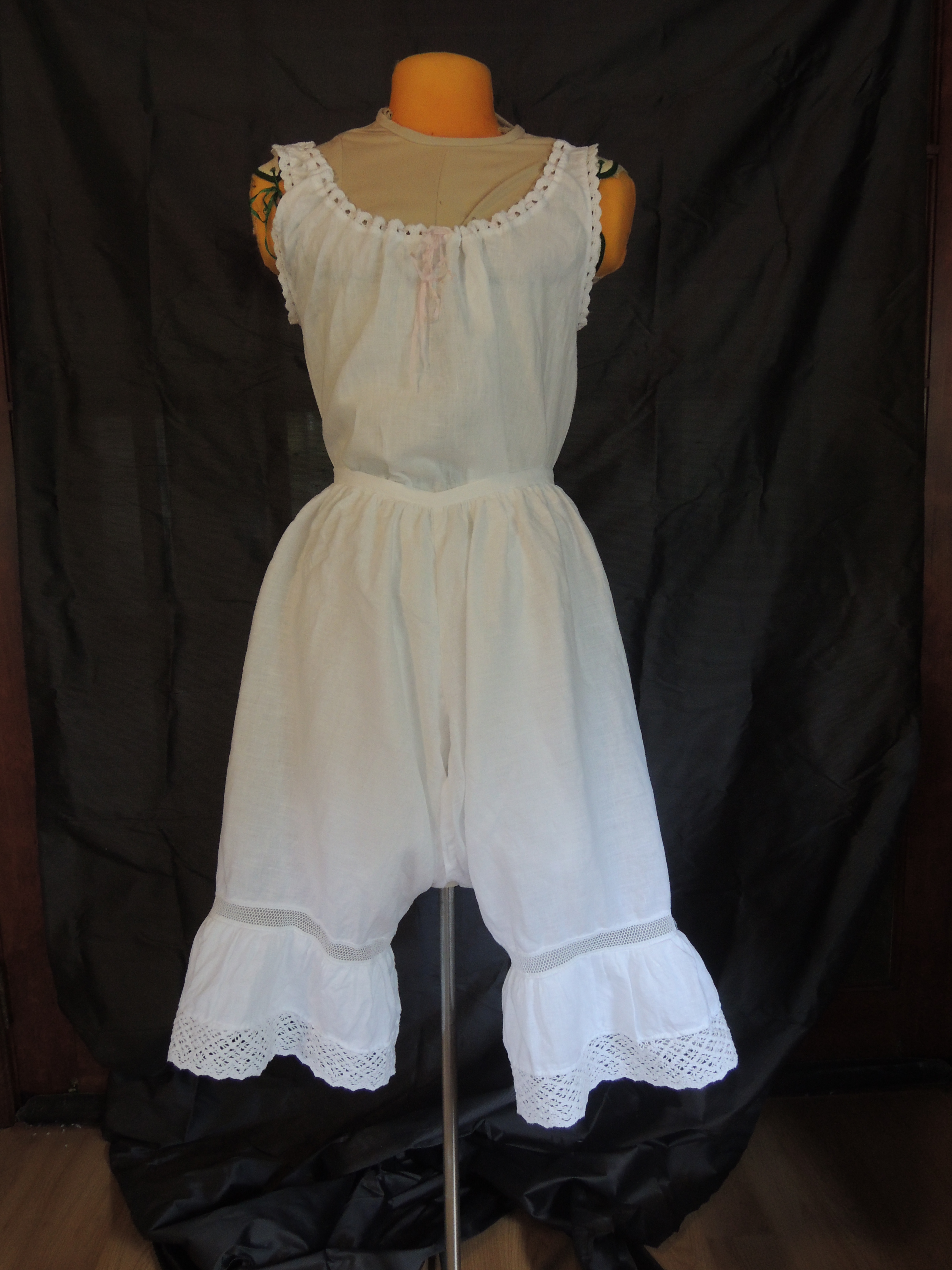 Well, the hem lace is cheapo; the insertion is English from an ebay lot. Cheap in price but much less so in quality! 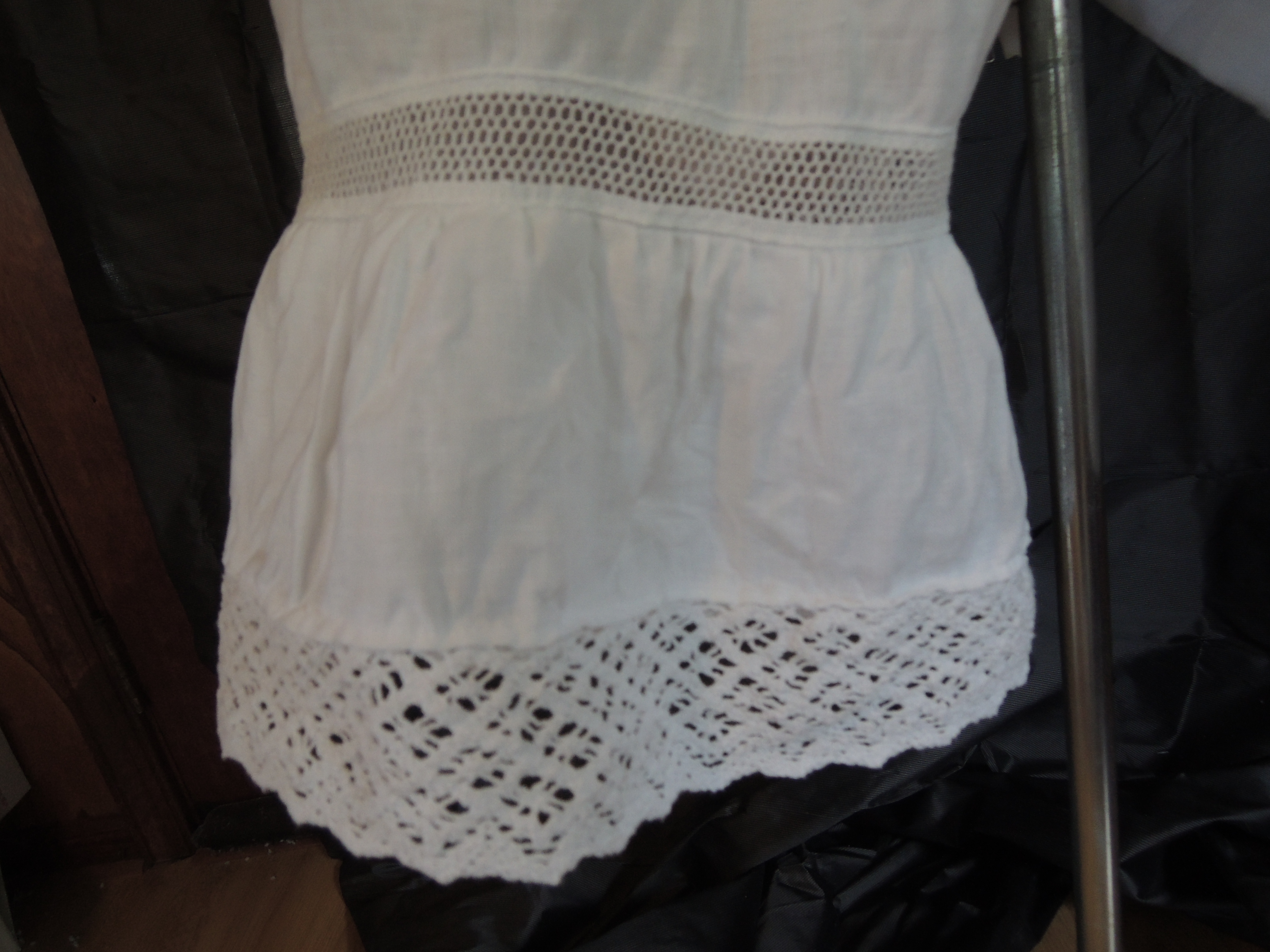 Next layer is the corset, of course, which is going to get yet another post of its own, being made of cotton net and therefore somewhat unusual! It was something of an experiment, plus I still have to get photos of it on me...there are plenty of flaws that I will try to be honest about, but I do want to go into some detail, For Science. Now if I can just find time to put it on and get pictures!

After the corset comes the corset cover and petticoat. This manner of dressing is not the be-all-and-end-all, by the way. This is just how I chose to do it for this outfit! You'll also see combinations and princess petticoats as well as waist petticoats, chemises, drawers, and corset covers - it's all according to individual preference.

My corset cover is...a nightgown from Amazon. Yes, really. If you're not too picky about it all being nicely finished in a period-correct way, you can find a pretty nice selection of Edwardian-ish underwear pieces in the grandma nightgown section!

I made sure to find one that had buttons in the front so I wouldn't even have to put those in - just cut it off at the waist, fit it a little more closely at the side seams, take a hunk out of the CB because it was still too roomy, and gather it in a little more at the waist. Being nightgowns, they tend to be generous with the fit. If I wanted it for a chemise though, it would have been perfect as-is. 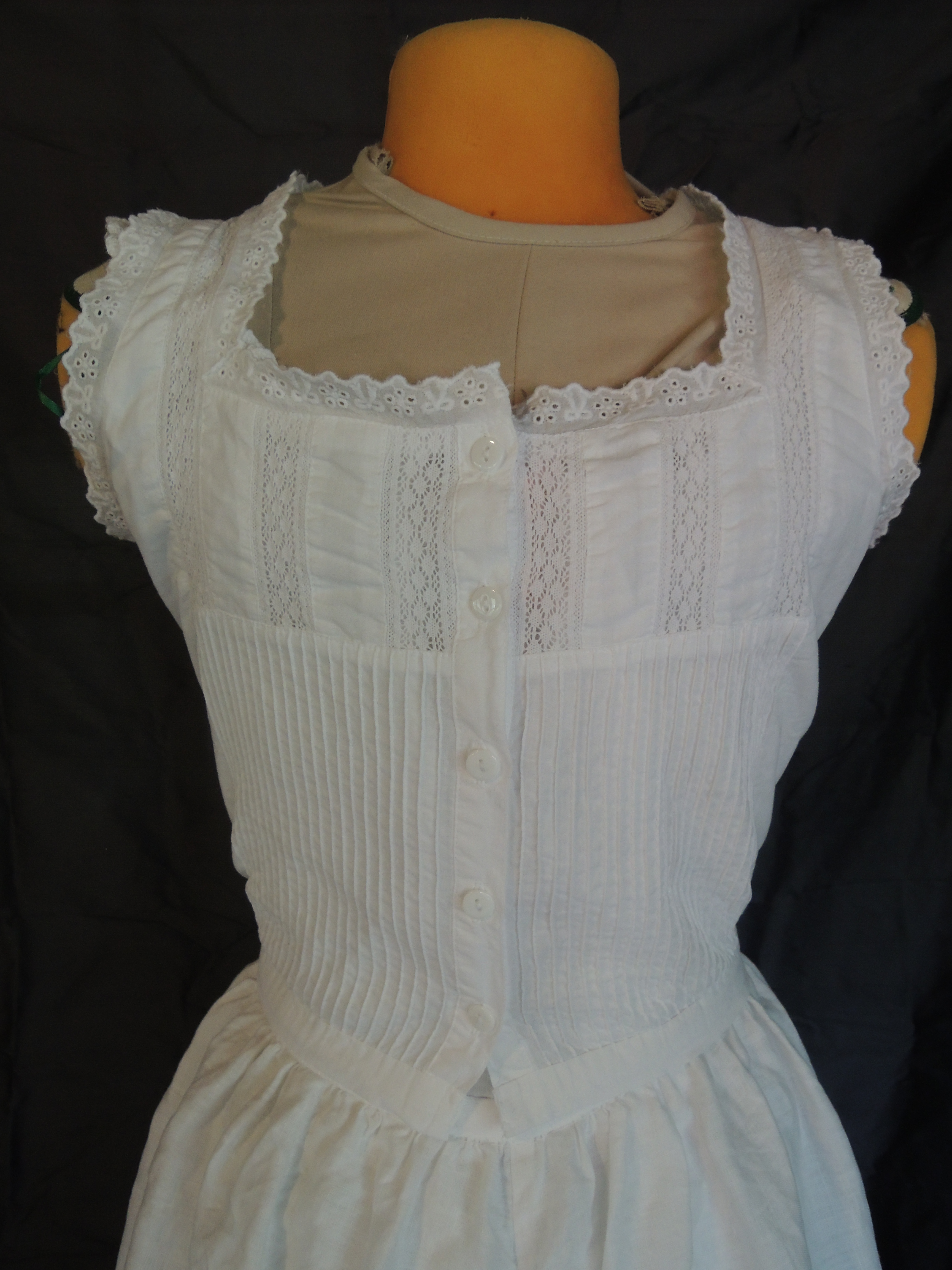 And, of course, petticoat! As I mentioned, I have a perfectly functional late-90s petticoat that I made to wear under my skating skirt a couple of birthdays ago...but I wanted something a little lighter weight for the dog days of summer. Originally I was thinking organdy, as organdy is very nice and light, and has a nice body for its weight. And then I decided I'd rather have an outfit than a new petticoat, as I ended up working a lot of hours in the lead-up to this event, and just didn't have time to make one. 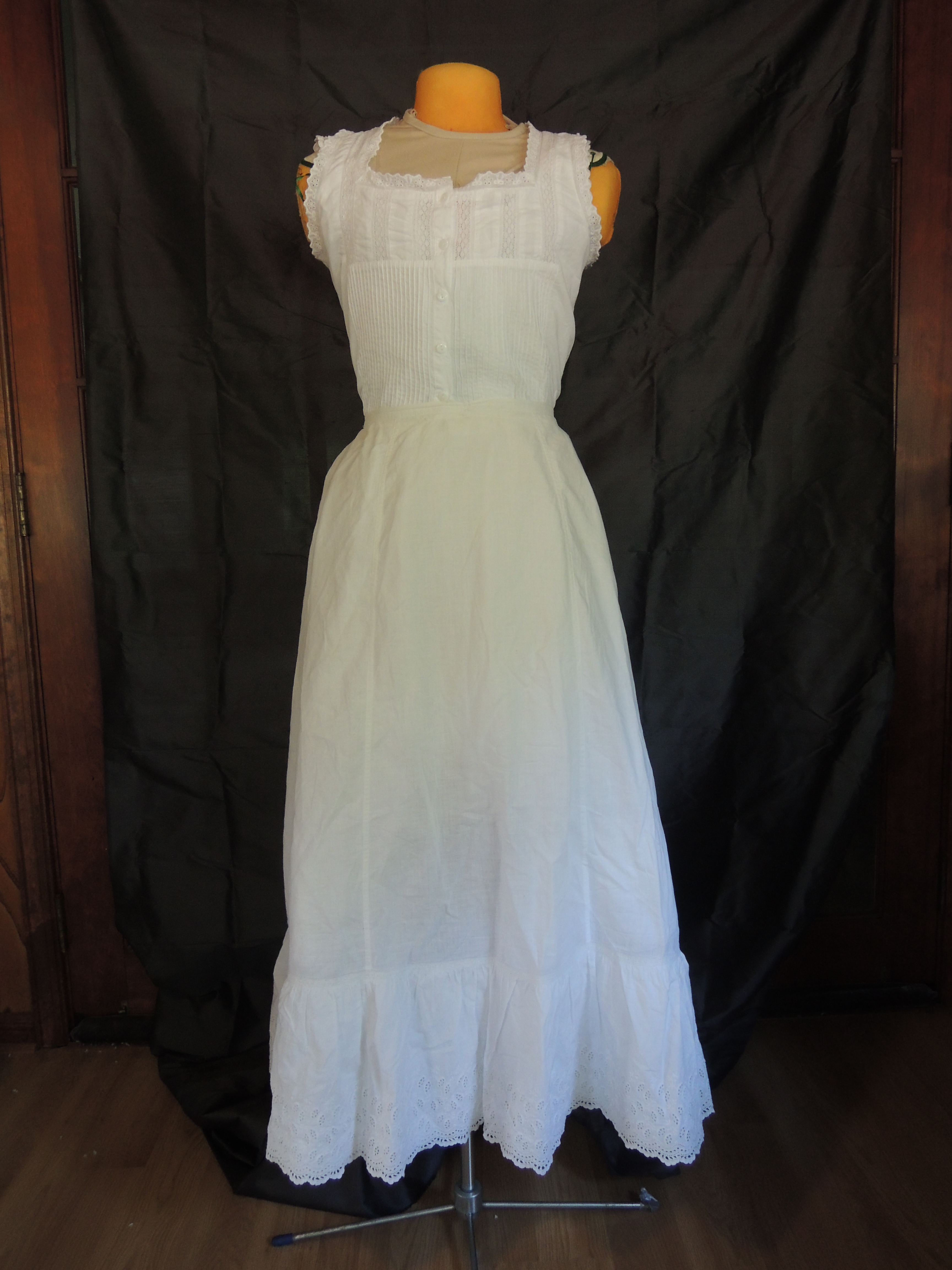 Ebay to the rescue! Did you know that you can find a turn-of-the-century petticoat with very little trouble on there? The right combination of shape (straighter 'teens ones seem to be more common), size, and price can be a little trickier, but I got mine for $30, with shipping. 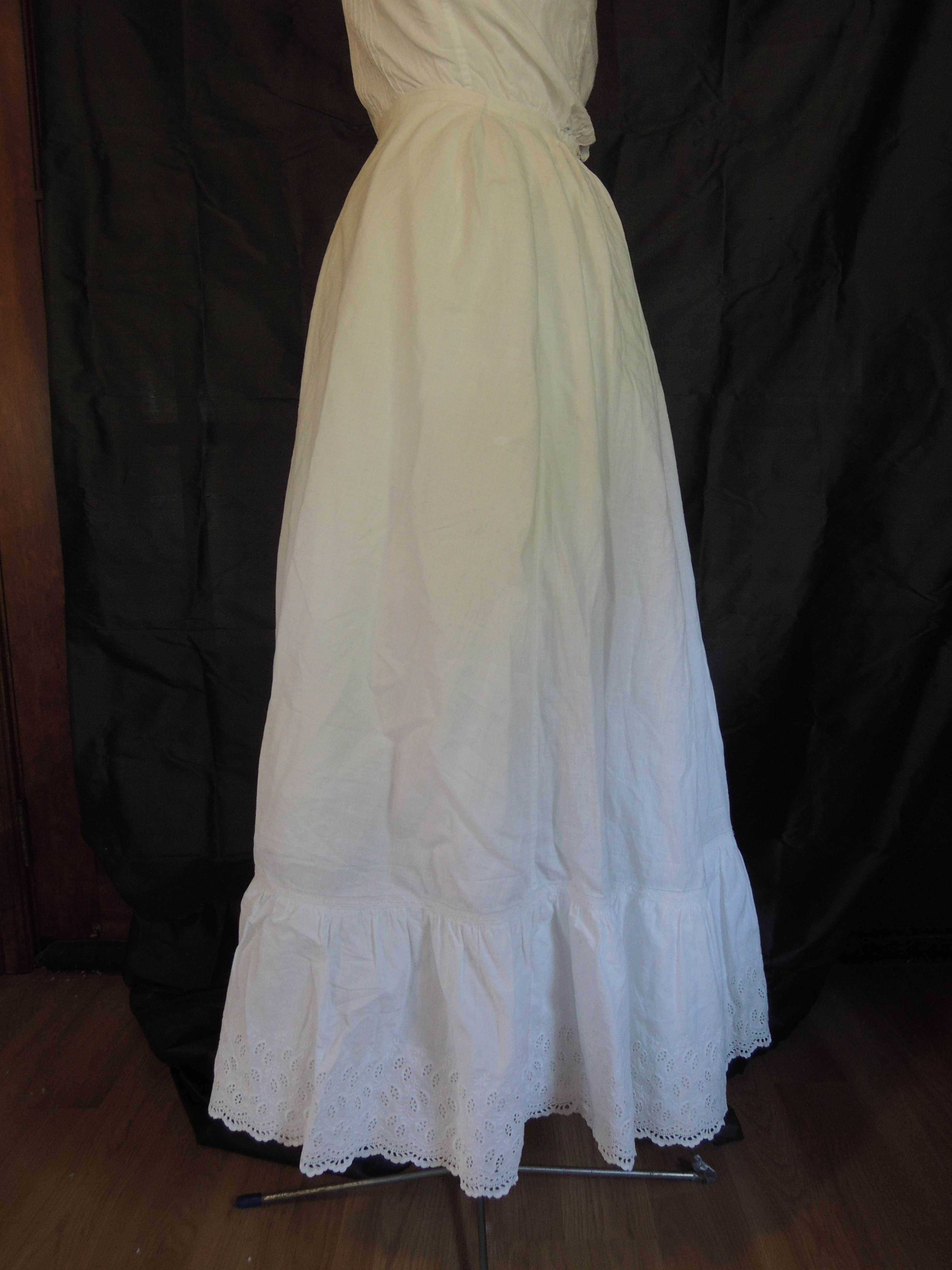 An aside: your mileage may vary as to whether you want to wear an antique. This particular petticoat is in worn but sturdy shape - I wasn't afraid I'd tear it with a day of normal wear, but it isn't in such pristine shape that I feel guilty about desecrating it, as it's got a few small holes, darns, and rust spots (that mostly came out after a soak in an Orvus bath). It's certainly not museum-collection quality, and it's got no provenance to make it interesting to anybody in a more local museum-type setting. So...I guess I'd rather it get some more wear as a petticoat than be cut up into somebody's craft project?
A few details: The petticoat is cotton, with a cotton eyelet flounce, and the hem underneath is also trimmed with a narrow lace. The panels are gored - flat at the front, and gathered at the CB; the seams are flat-felled. The waistband is heavily darned, especially at the CF where it would have gotten some wear from a busk. And I actually had to take the waistband in a titch - only a little bit, so I sewed two big ugly tucks rather than replace the whole waistband. Much easier. I also had to replace the closure; the original was a snap that no longer stayed snapped (unhelpful), so I just replaced that with a hook and eye.
And I also let out a tuck to make it longer - it was clearly a tuck to shorten the thing, not a decorative tuck, as it was done slightly unevenly, and with the tucked fabric inside the petticoat, folded down behind the flounce. Could have been done later in the petticoat's life (this shape would also have worked under those fuller mid-late teens skirts that were fashionable briefly, especially at its shorter mid-calf length), or, as I like to imagine, the original seamstress finished the whole petticoat, discovered she'd made it just 2" too long, and rather than taking off the waistband she just tucked the whole thing up and called it good enough!
And related to "good enough" is my favorite detail of the whole thing: 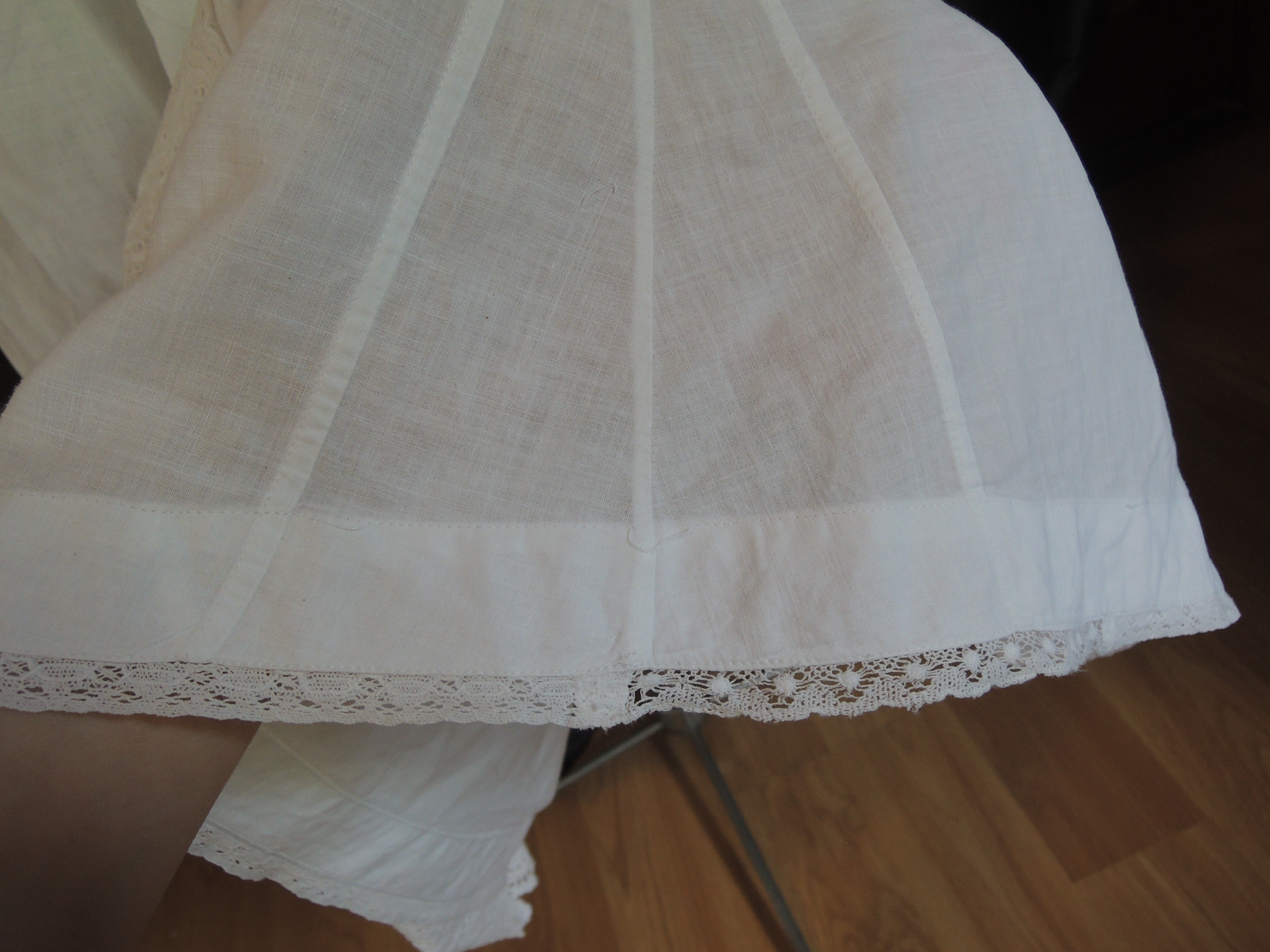 This is the hem of the petticoat, underneath the flounce: the corners of two gores are pieced in, and there is a 4" piece of mismatched lace, I assume because the maker ran out of the first lace 4" from the end! A woman after my own heart. Sewing sister from 120 years before this time, I salute you!

(For every apparently perfect museum piece, there is a petticoat with a piece of different lace in the hem. Another reminder to stop beating ourselves up when our clothes aren't 100% perfect...theirs weren't, either.)
Posted by Amanda at 7:26 PM