First of all, my usual disclaimer any time I make anything corset-adjacent: I can usually make an adequate corset for my own use, but I would never claim that I'm Doing It Right, or make pretty corsets! I have adequate skills to make a corset that fits okay most of the time (*cough*), but a really well-fitted, professional-looking is beyond my skills. And I'm okay with that! I make a mean hat, I don't have to have mad skillz in every area of costuming! Til I can afford to buy custom Redthreaded corsets for all my foundations, though, I'm stuck making my own corsets. 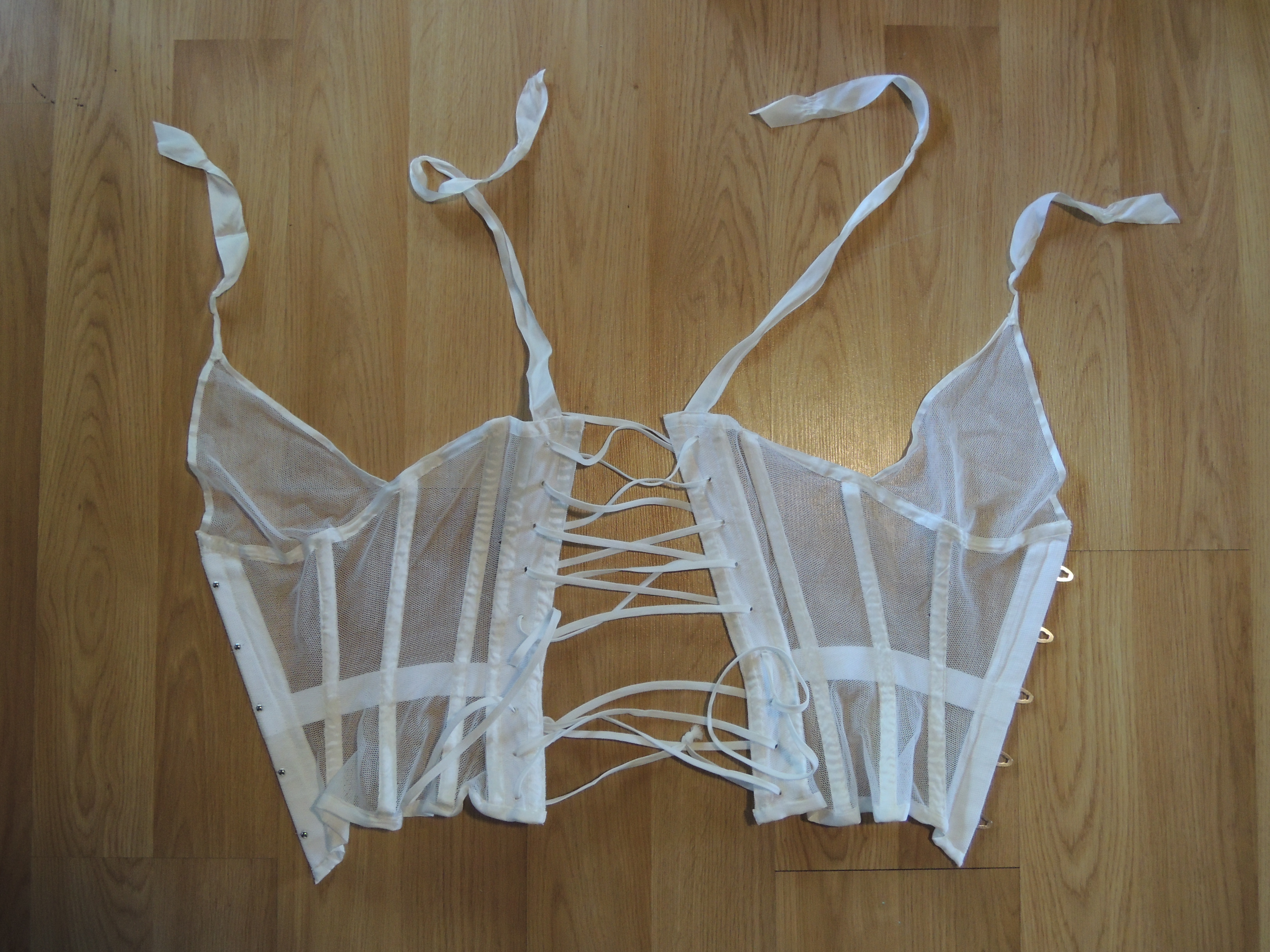 All that said...while this corset does have some pretty obvious issues that make it somewhat embarrassing to post publicly (yes, really!), I'm overall very pleased with how it came out. If I liked making corsets, this would be a great working mockup to see exactly what I ought to improve for the next version, which would be a vast improvement over this one. As it is...I doubt I'll make version 2.0 any time soon, at least until this one dies. 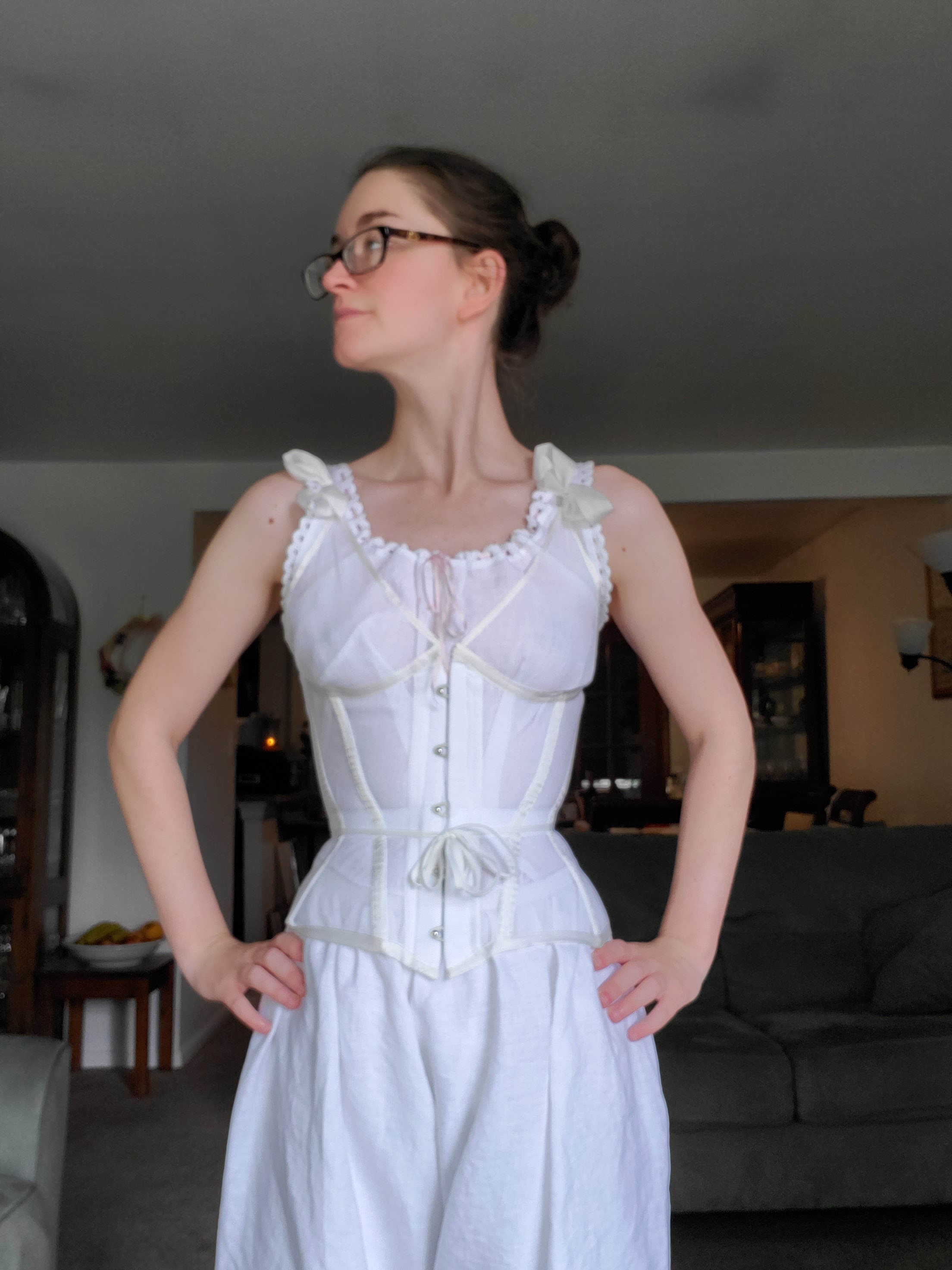 Now, the obvious questions: why on earth would I decide to make a net corset? Don't corsets need to be made of strong fabric?
Well, to the first question, I say: ever spent any time on the East Coast of the US generally, and the Philly area specifically, during the summer? 95% humidity that makes it feel like it's 10 degrees hotter than the actual temperature is in no way uncommon! We lucked out with the weather we actually got. I'd seen a pattern for a net corset from Ageless Patterns while browsing the site, and filed it away for future reference, and so for this event, decided, hey, why not? Worth a shot!

I did a very moderate amount of Pinterest-based research on mesh/net/"ventilated"/etc. corsets before diving in, and from a casual survey, I made the following generalizations:

- Seem to date from approximately 1870 through the 19-teens, though there seem to be more examples from the later half of that date range, at least that were easily findable on Pinterest.
- While they are obviously far less common than your "normal" type of corset, there seem to be enough surviving examples and adverts for them that this wouldn't have been a total luxury available to very few people. Is that a bit of an inference? Sure. But as someone who tends to prefer to make costume that doesn't represent the outliers on the spectrum, I felt justified in not considering a net corset a total outlier. (And on the other hand, not too many people seem to have reproduced them, and sometimes I like to make things not everyone and their dog has made yet!)
- It's difficult to tell exactly what the net or mesh fabric of these corsets was like, just from photos. Sure, museum listings say "cotton". Yes, very helpful, thank you. What was the hand like, how stiff was it? That kind of thing.
- While my pattern doesn't show a waist tape, it's a very very small minority there. I believe all the extants on that Pinterest board have waist tapes...which makes sense when you think about it! Even a pretty sturdy mesh is probably going to want some reinforcement there. (Pay attention; we will revisit this plot point later.) 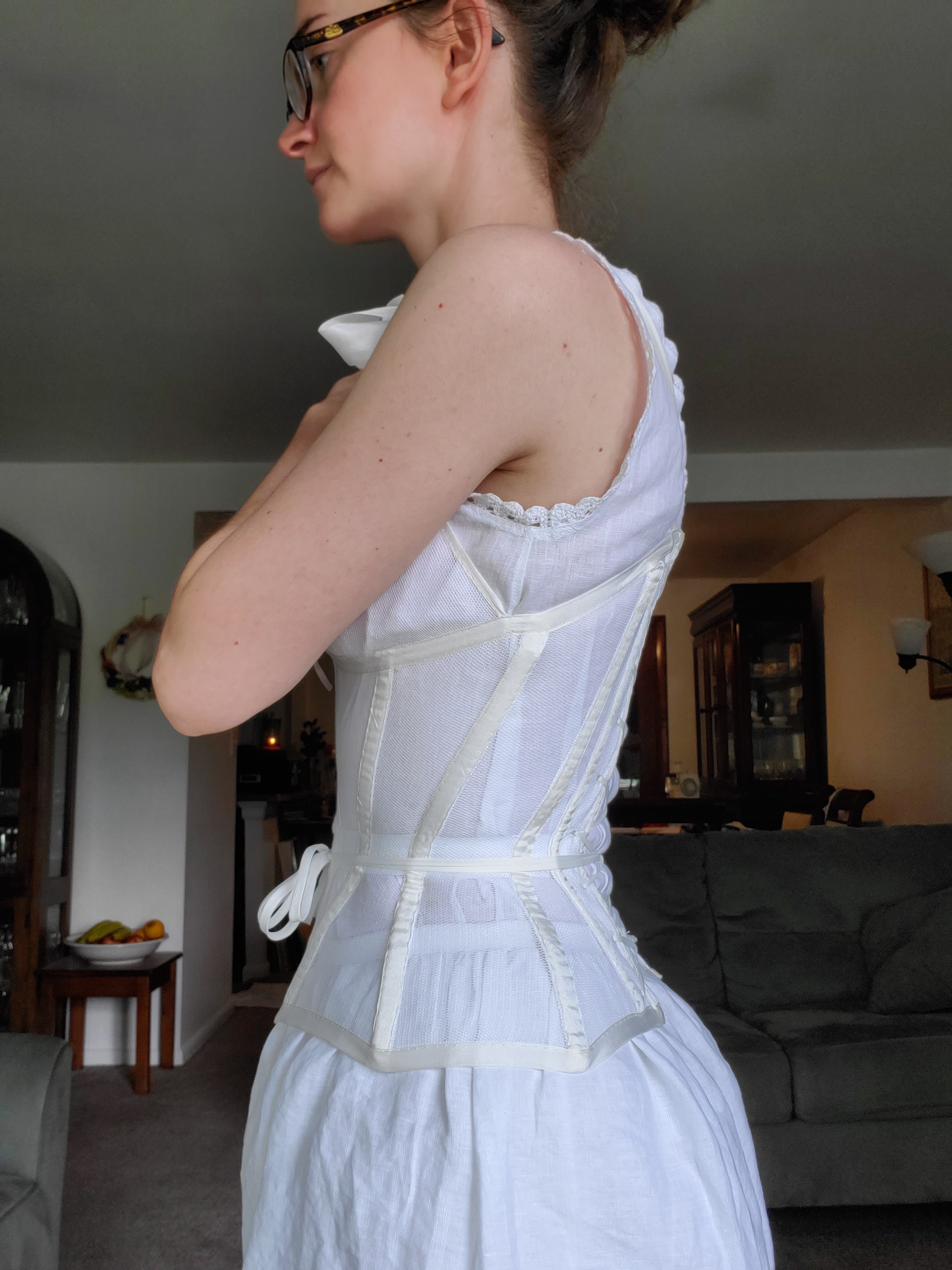 All the pattern says is, "This corset, made in ecru net, can also be made in tulle, in thick muslin or in all other openwork cloth." Well okay then! I chose to use cotton net that I had on hand already. It's the stuff from Dharma Trading, and it's not the finest nor best quality net out there, but if you look at the price of most other cotton bobbinette, you'll understand why I decided to experiment with the stuff I already had on hand! (I've used it for millinery, mitts, and other accessory-type things.) While most of the extants seemed to be made of slightly heftier mesh, bobbinette was used for boned foundations in the 1950s, so while a bit of a stretch, it wasn't completely out of left field in terms of stability. 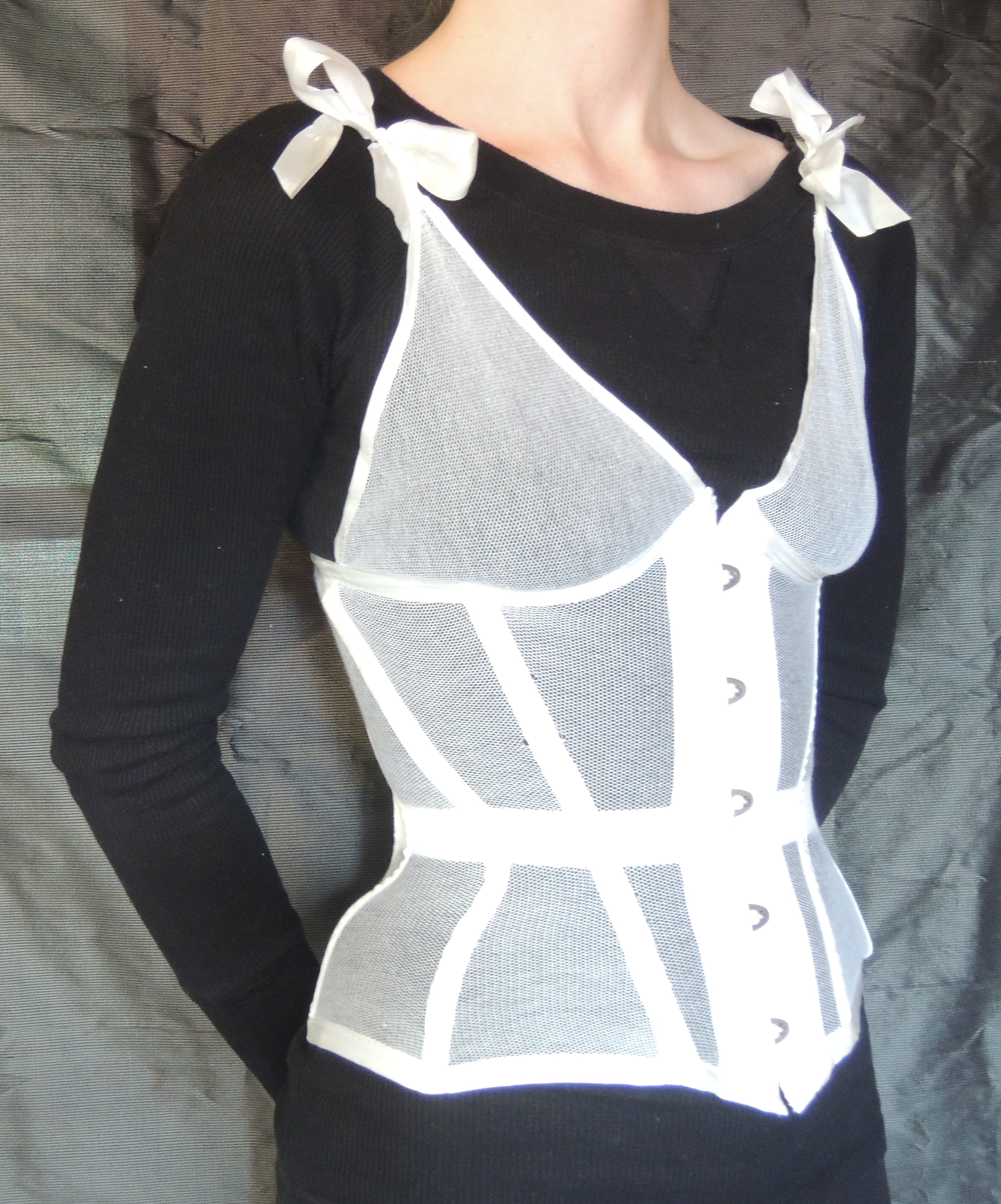 I wouldn't necessarily recommend this particular fabric, though, as I can tell it's not going to hold up indefinitely. A few of the threads have "popped" from wearing it to the event and for a few hours once I'd finished it, pre-event. That said, it doesn't show signs of imminent disintegration! If this were something I needed for actual daily use, it would be another story, but as it is, I think it will do for light use, which is all it will get from me. A better-quality bobbinette might hold up better.
I used plastic whalebone for boning, twill tape for casings and waist tape, and silk ribbon for binding, covering the boning casings, and the straps. It was very fussy sewing the silk ribbon binding on - wifty net plus thin wifty silk = hand sewing. I'm sure a professional could manage to get that combination to behave under a machine, but that's beyond my abilities.
Now, let's talk about the elephant in the room - the fit at the waist!
Yikes. I tend to like a larger lacing gap, as I always find that corsets stretch just a little bit over time, especially once I've sweat in them a lot (yes, ew). Plus this is net, and despite using it with the pattern pieces going the non-stretchy way...there's still a little bit of give. So, naturally, make the measurements a little smaller, right? Except that once you put a waist tape in...it's really not going to stretch. I AM GENIUS. So, there's a 6" gap at the waist. That's not ideal. Don't go for a 6" gap. If I ever planned to wear this corset under a really fitted dress I might have a problem with the fit of the back, but as it is, it's still wearable! I can tell that after more wear, the bones will completely warp out because of the stress pulling them into this shape: ( )  You can already see them bowing out a bit in the picture below. Again, this was definitely a learning experience so I'm not upset. It's not ideal, but it's not a loss as long as I can wear it, which I can. I did experience some discomfort at the waist by the end of the day, but not nearly as much as you'd think from that fit. And I spent close to 8 hours in it, so not too bad.
A sidebar about the pattern I used...I, personally, like Ageless Patterns. I like the variety on offer, and I like that they're taken from period patterns. They ARE, however, pretty much the opposite end of the spectrum from a line like Truly Victorian, where you can make something straight out of the pattern envelope and have it be presentable. With AP, even if you happen to be the measurements of the original (and I am not a 38 bust/26 waist...), you're going to have to do some adjustment. So I really only recommend AP to advanced sewers, or people who are willing to muddle around til they figure something out!
I appear to have lost the picture I took of my pattern pieces laid over top of the originals, but it was very amusing! A couple inches shorter, a good few inches narrower (although as we can see...a little too narrow!), and I didn't bother using the bust cup pieces at all, as they were just triangles. Apart from the tweaks I would make for version 2.0, I actually really like the shape this pattern gives. It's right at the "we're almost to the S-bend style but not QUITE" shape. 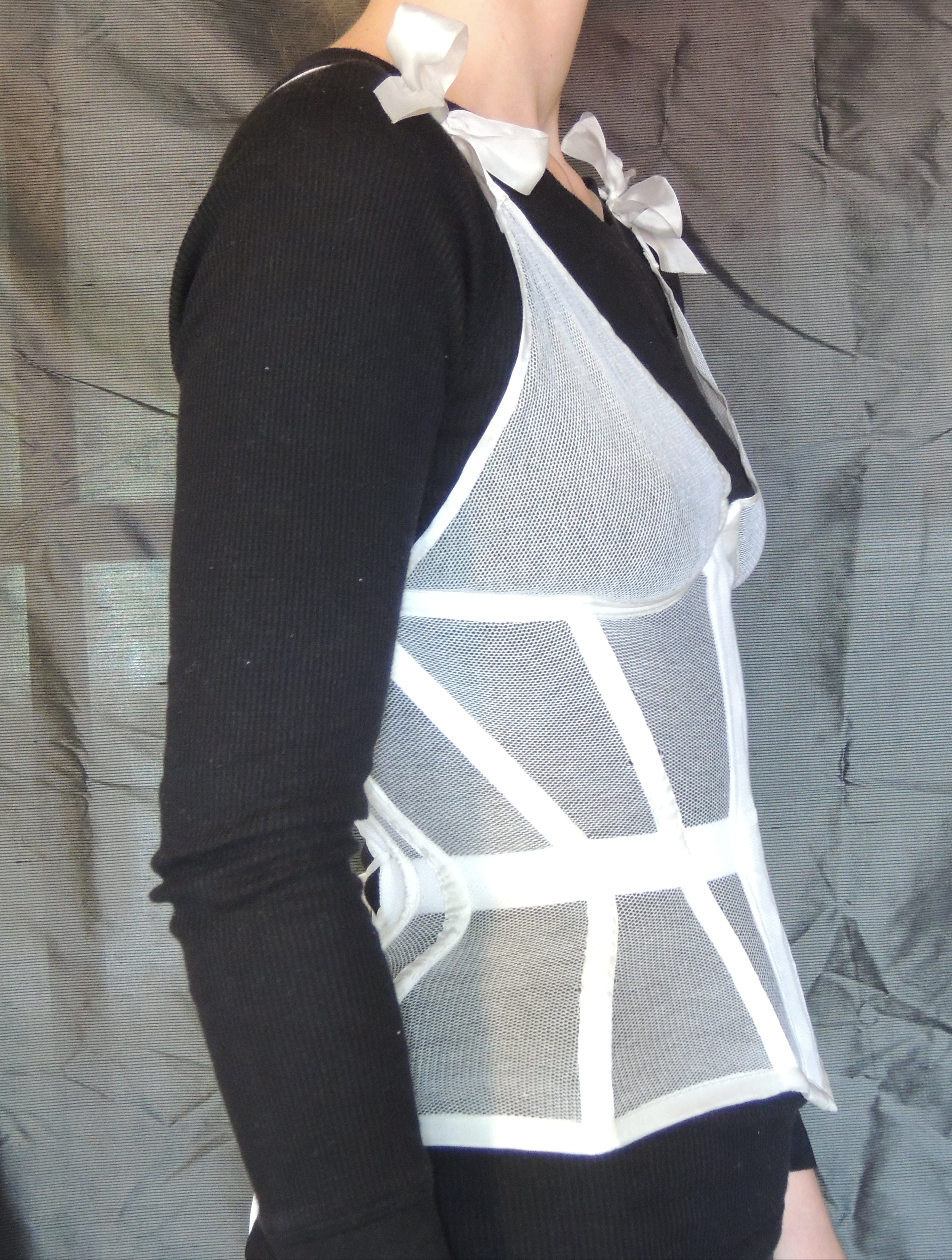 The important question of But Is It More Comfortable Than A Regular Corset In the Heat? wasn't really answered to my total satisfaction on this first wearing. It was comfortable, but as the heat index topped out at the mid-80s, it's not quite a fair comparison to really hot events in regular corsets! Still...common sense says yes. Much more airflow, anyway.

And another sidebar: yes, I don't have much in the way of assets to contain, but I think anyone of any size could successfully make a summer corset. You might want to use a different pattern or a more substantial material (SewLoud used cotton crinoline for hers; I'm not sure she's going to post about it but she did make one!), but I firmly believe it's doable! The original bust measurement was 6" bigger than mine, after all.

And finally, I took a few pictures of All The Ridiculous Things You Can Still Do In A Corset! Provided, of course, you can do them before you put the corset on... My friends could tell you about my proclivity for running up and down hills while in costume, just to prove I still can, and these silly pictures are along those lines.
I'm poking fun, but there are still plenty of people out there who are horrified by the idea of corsets and regard them as oppressive torture devices. They're really not, I promise! Is tight-lacing still a thing, and will doing so limit your physical activity? Yes, of course. Not my cuppa tea, but I've got nothing against the people who want to do it! As an historical costumer who likes to represent a fairly average mode of dress, though, I don't lace tightly because I don't need to. This particular corset gives me about a 2" waist reduction, and I've never laced down tighter than that. I don't have a lot of squish in the waist, it's just not how I'm built; in fact, most of my corsets give an inch or less in waist reduction. Corsets are more about giving the right silhouette under your garments, and about support (depending on the era, your petticoats and skirts may well give you bruises at your waist from the weight if you don't wear a corset!). This has been your PSA for "wear your corset (provided you're physically able to)" today, thank you for listening.

So, all in all, while this corset wasn't my best work, it was definitely successful as the test piece it was. Net corsets are doable, wearable, and quite comfortable!