1830s, everywhere, all the time! Except for on me, because I don't care for the big sleeves and ridiculous hair. (On me, specifically. I enjoy seeing it on everyone else! It just makes me feel infantile.) Hosted by Robin of SewLoud - I chipped by coordinating a picnic the afternoon-of, and by sticking candles into candelabras. It was a splendid event at the Joseph Ambler inn (they were very good to us), and we only mystified a couple of dozen wedding guests (the venue is big on weddings, unsurprisingly). 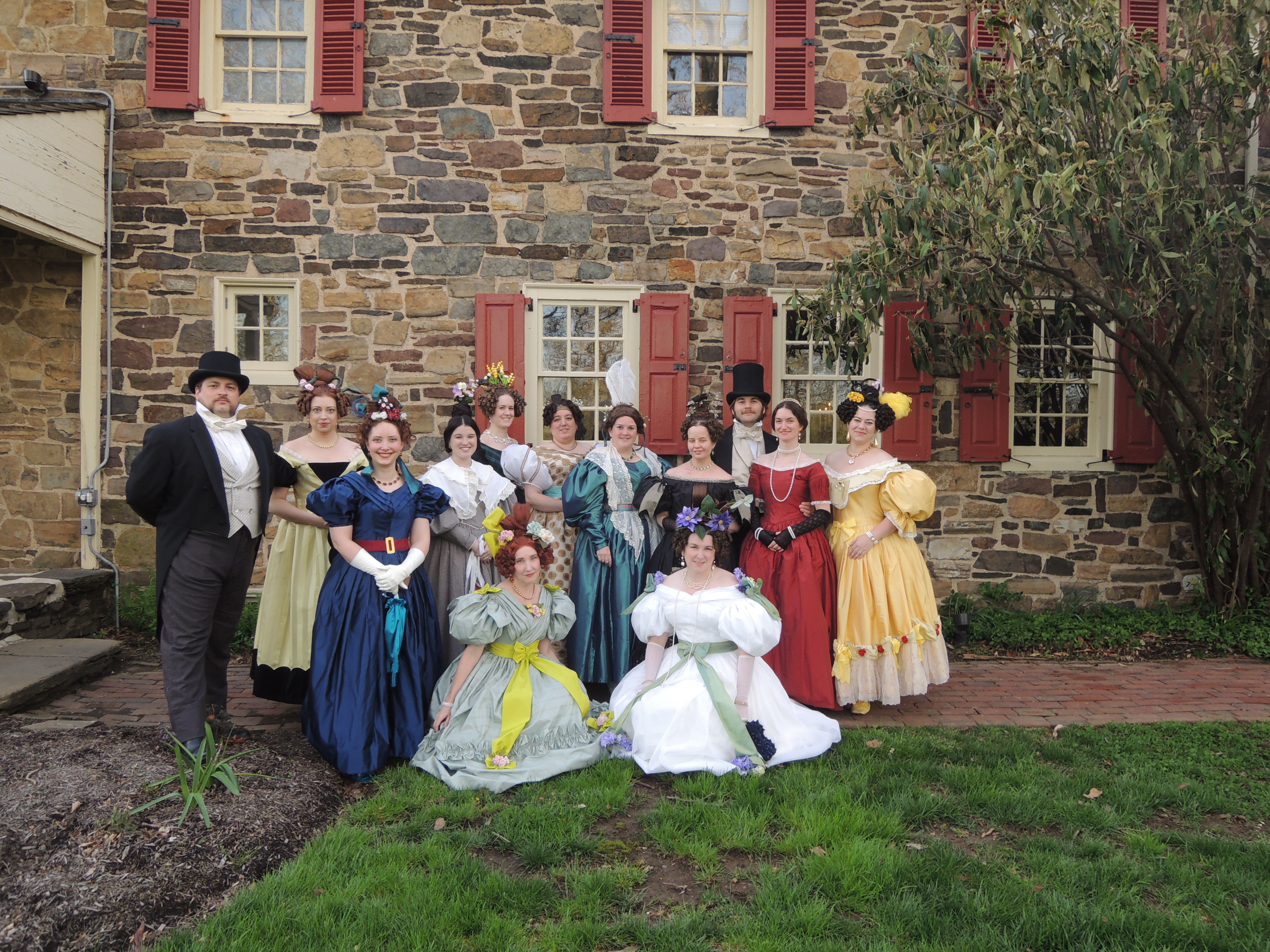 And this event debuted Mr. Dedicated Follower of Fashion in costume! This other post goes into detail about what I made for him (and what I ran out of time to make, and bought instead....). I will say that boy clothes are pretty different from dressmaking...! 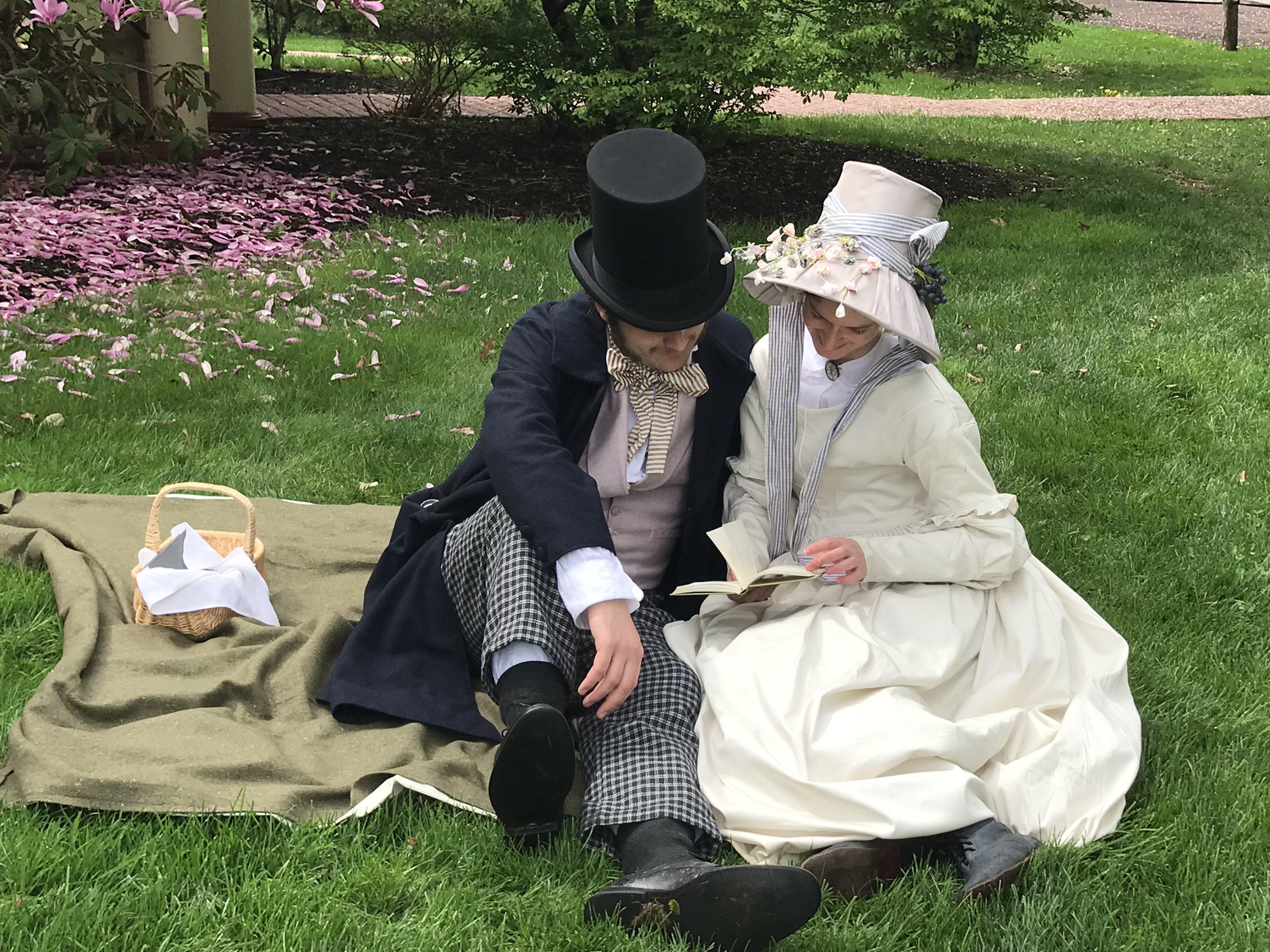 Two whole outfits of course meant that I had almost no time to sew for myself; certainly no time for a new dress. I did sneak in some new accessories for myself though: a new bonnet (as my other late '30s is so very christmas-y!), a new, lighter-weight chemisette, and a day cap. 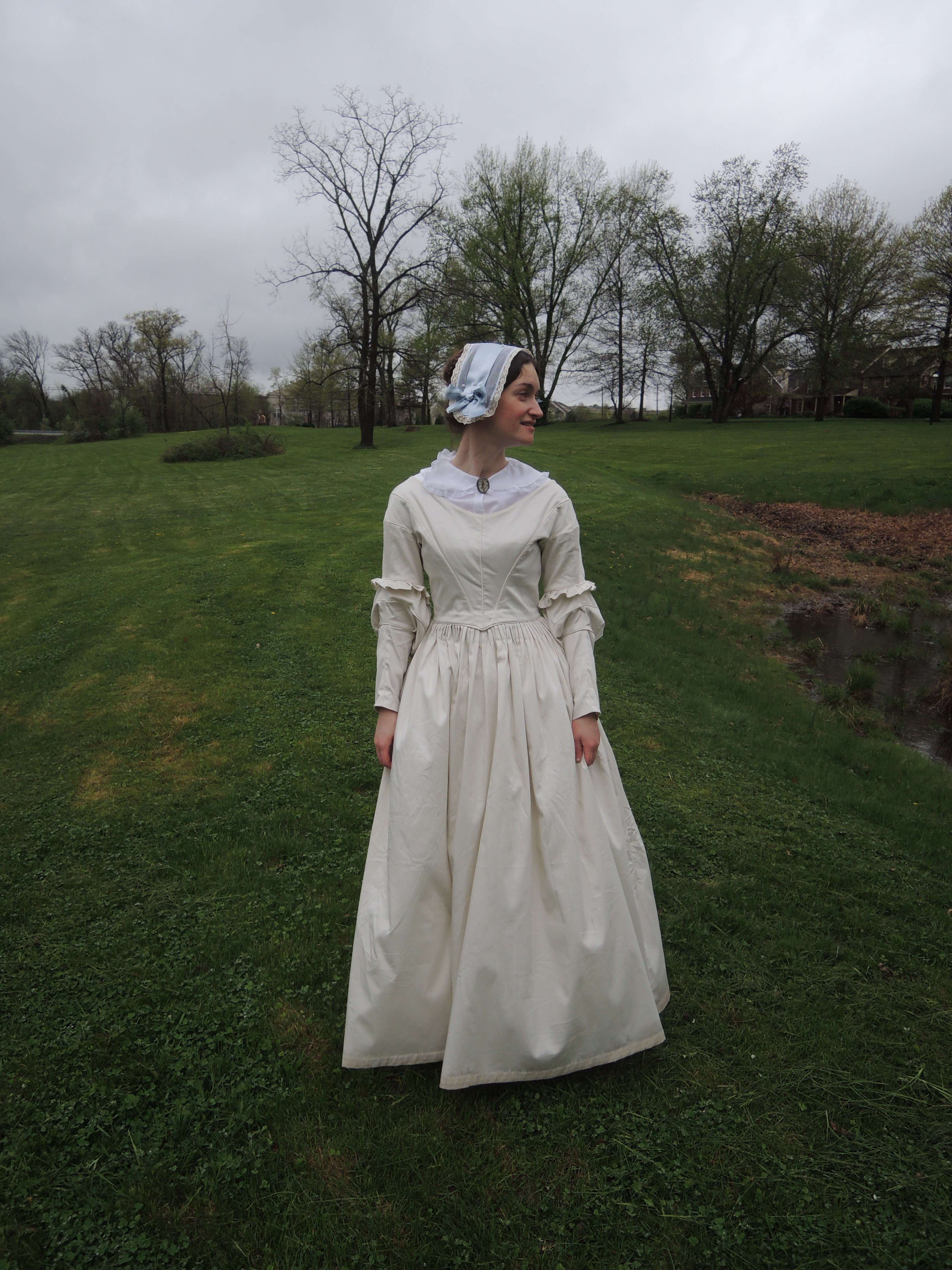 Cap: made of white cotton net, trimmed in blonde lace, and blue silk satin ribbon. I used the Miller's Millinery 1840-60s flat cap pattern (view A). Which is entirely something I could have figured out for myself, but I'm at the point in my sewing life where I'm willing to pay someone else who already figured it out! Plus I wanted the 1860s version for Gettysburg this year anyway, so...worth it to me. The flat caps juuuuuust seem to be coming in at the tail end of the 30s, from what I can tell. So my cap is maybe slightly more fashion-forward than my dress and bonnet...but I wanted a doiley on my head rather than a shaped cap, so. 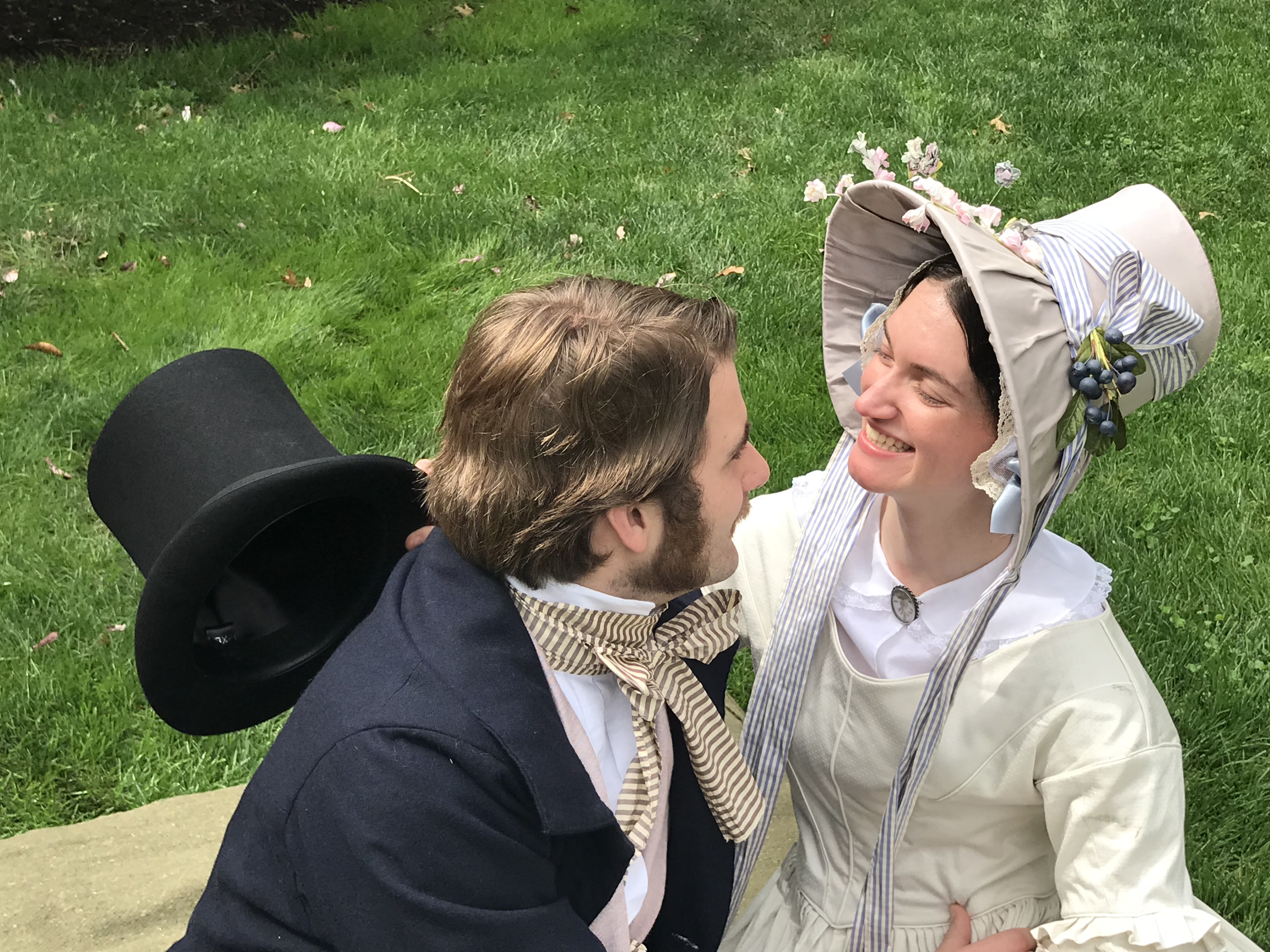 Bonnet: Made from a heavily-adapted version of the Lynn McMasters 1830s bonnet, that at this point I think is fair to just call my own pattern! If there's any other bonnet pattern out there that covers those few years where the bonnet is transitioning from the big silly poke style to the coal scuttle of the early 40s...I haven't found it, so I had to make my own. I very specifically wanted a more subdued brim, with the three-piece construction (brim, crown, tip) but with a shape that foreshadows that "scoop" shape. 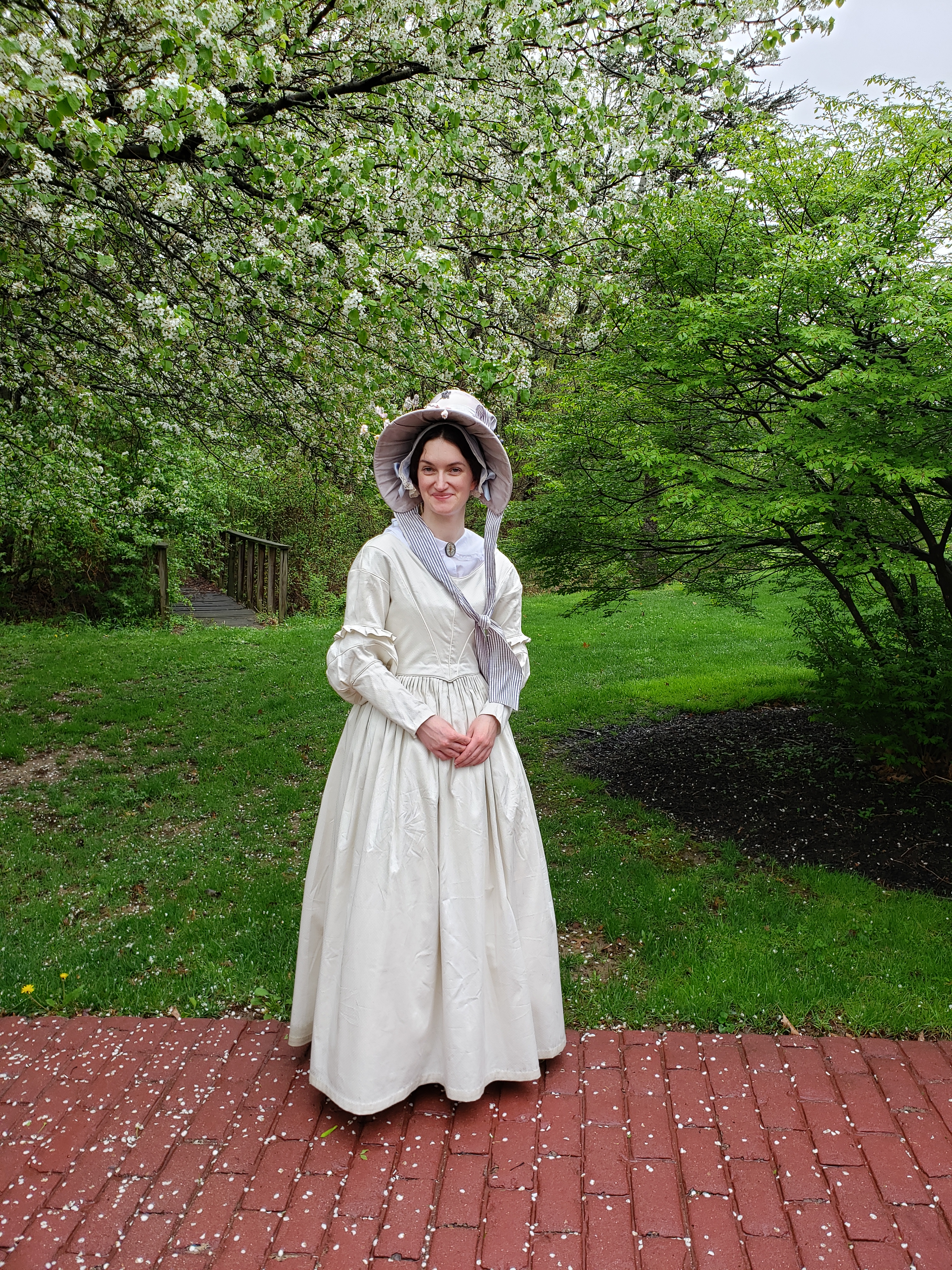 Still not perfect, of course...but I quite like it! Very pleased. It's a buckram wired form, covered in silk taffeta from Silk Baron, and various paper flower-things from a few seasons ago at Joann's. (And fake blueberries.) 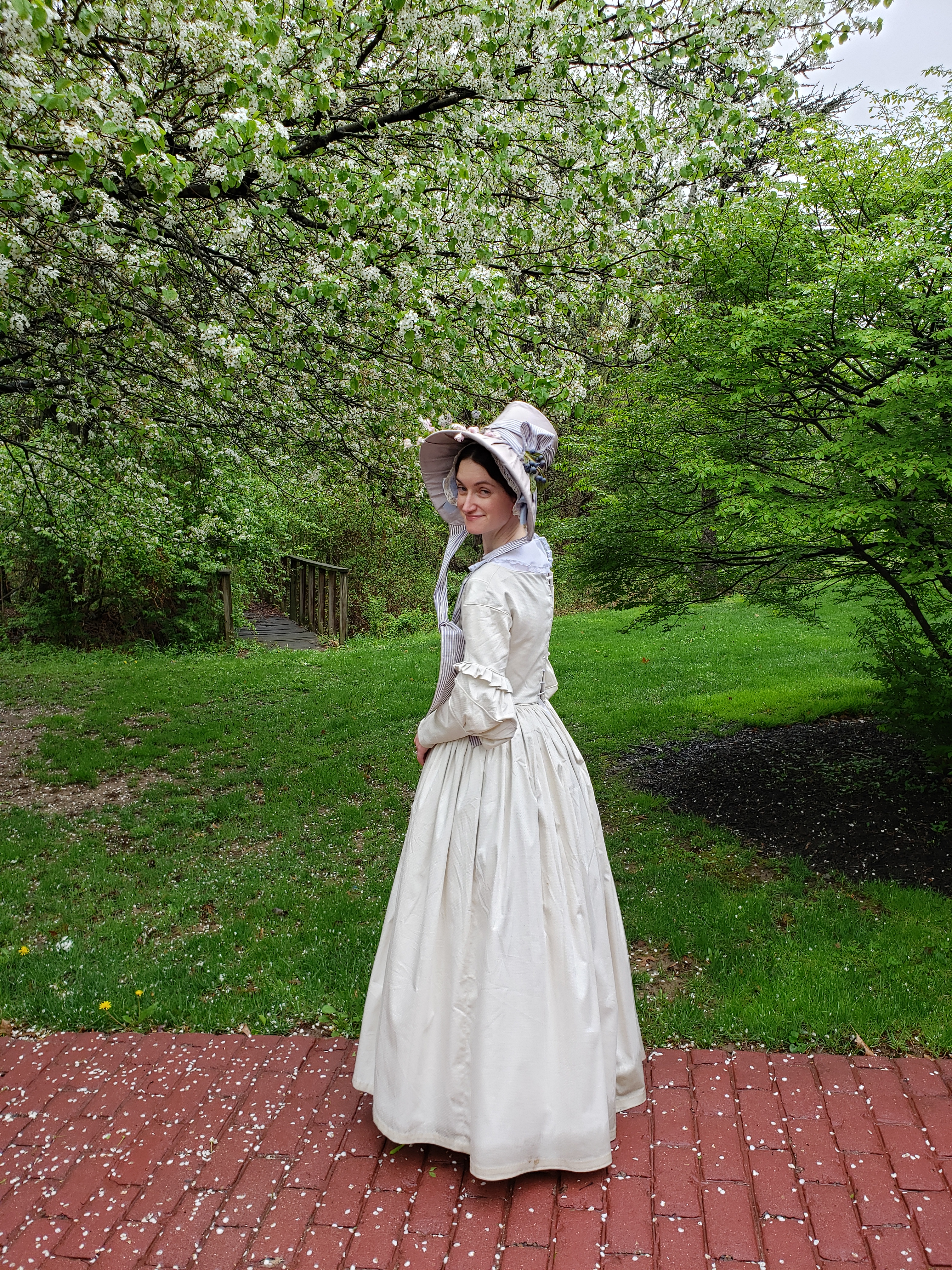 Chemisette: It's a chemisette? Used the same pattern as the last one I made, just made it a couple inches longer, as the old one has a tendency to creep up over the top of the corset, which was v. annoying. Made of Dharma Trading cotton lawn, and trimmed with lace from Farmhouse Fabrics.
Mr. Dedicated Follower of Fashion and I were recruited to be the token royal couple, mainly because we're the younger of the two couples that were at the dinner, and because Mr. DFoF does in fact bear a passing resemblance to Albert once he has the correct facial hair! Also because we're an appropriately schmoopy couple. (Spent a not-inconsiderable time at the picnic reading Tennyson to each other while sitting on the picnic blanket. Awww.) 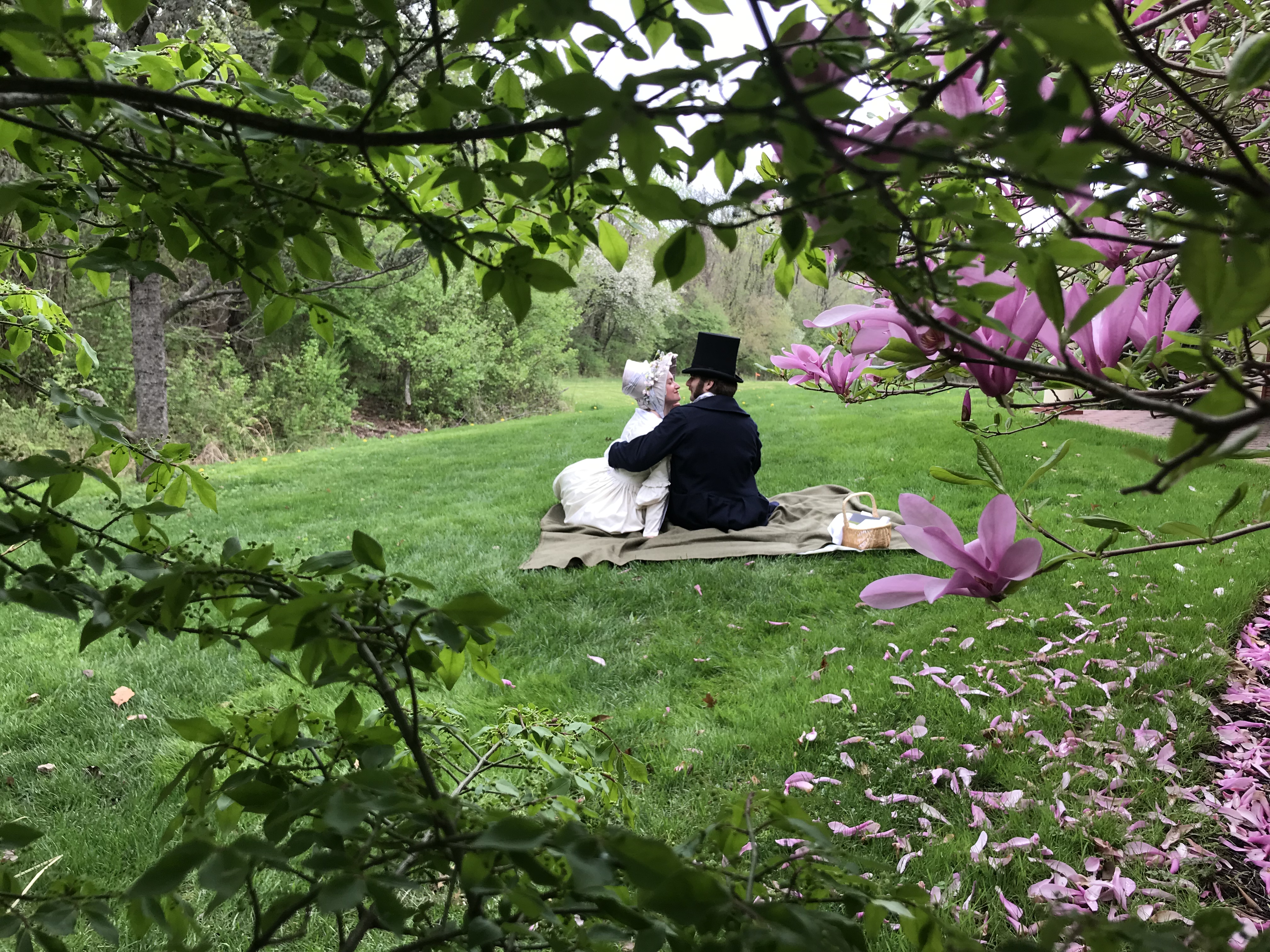 And being generally revolting to the company at large. 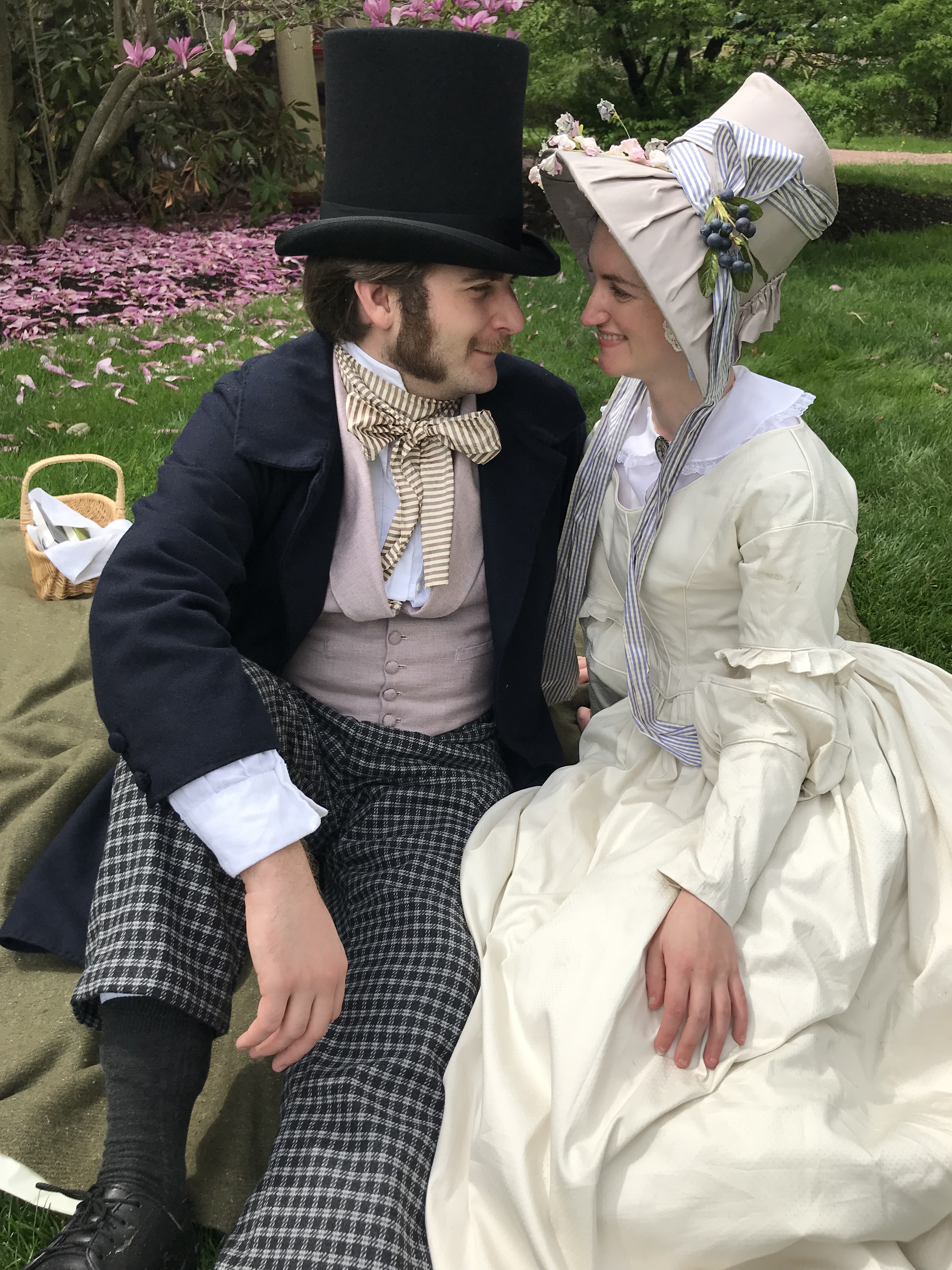 Not for all that long, though. I promise we really aren't that horrible to be around most of the time!
Picnic was casual, and really just an excuse to wear day dresses, lounge around, play cards, and read! We just picked up Wegmans catering (highly recommended) and sat on one of the patios for most of the time, as it was very wet. I did insist on exploring the vicinity of the drainage ditch (as seen in previous pictures, it was a picturesque drainage ditch!), and let me tell you my hem will never be the same. Also ended up extremely squishy-footed. Good thing I didn't wear my nice shoes...
And you can already see in that picture how wet my hem is...

Not the best day for a picnic, really! Of course the next day was lovely, and it even cleared up nicely in the evening. Which was good, for pre-dinner photo ops! I had zero new things for dinner so I didn't bother to get many posed pictures, and I was almost jealous of everyone else's big sleeves and hair! Almost. ;) 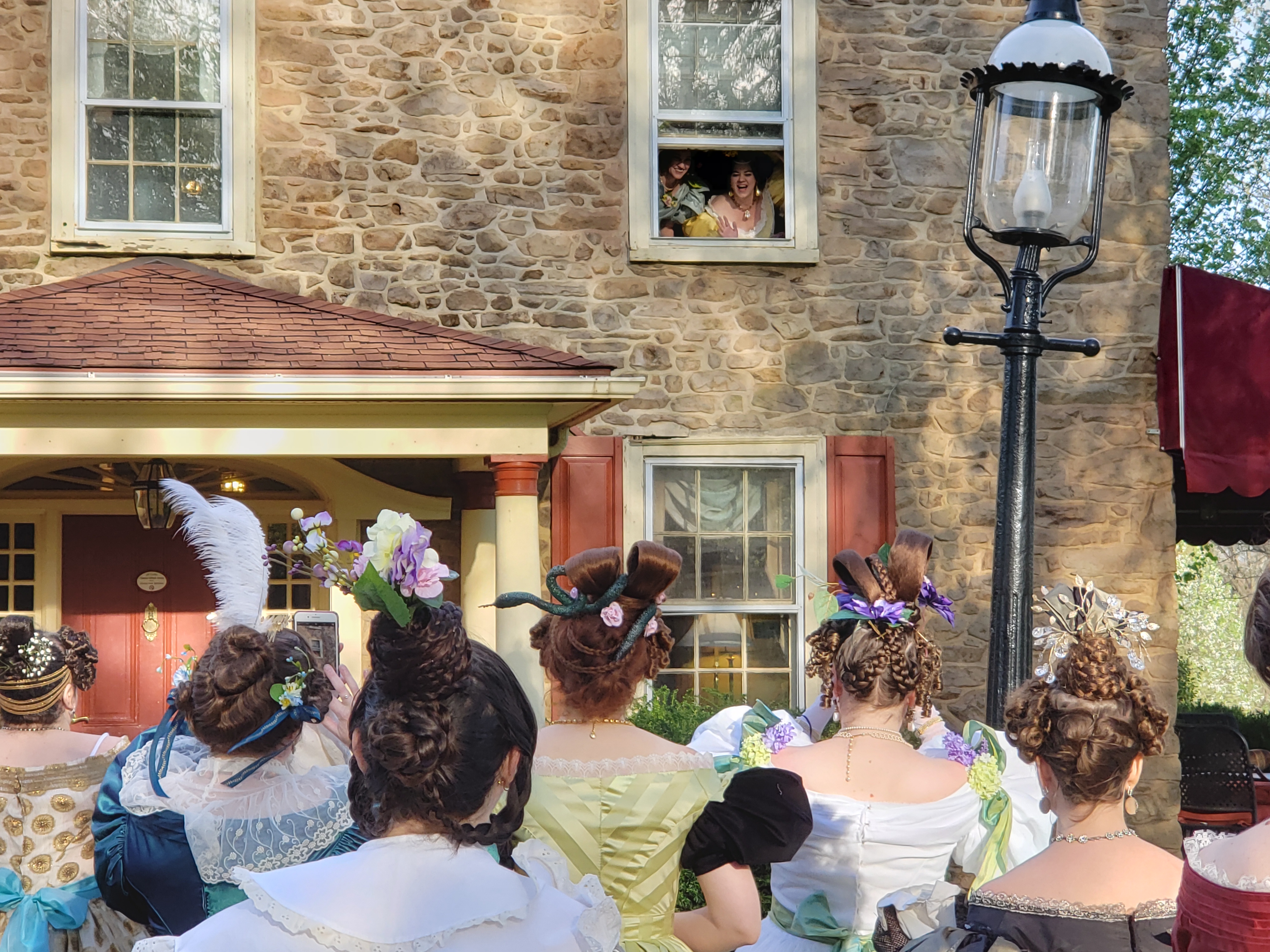 Also it was maybe a tiny bit windy... 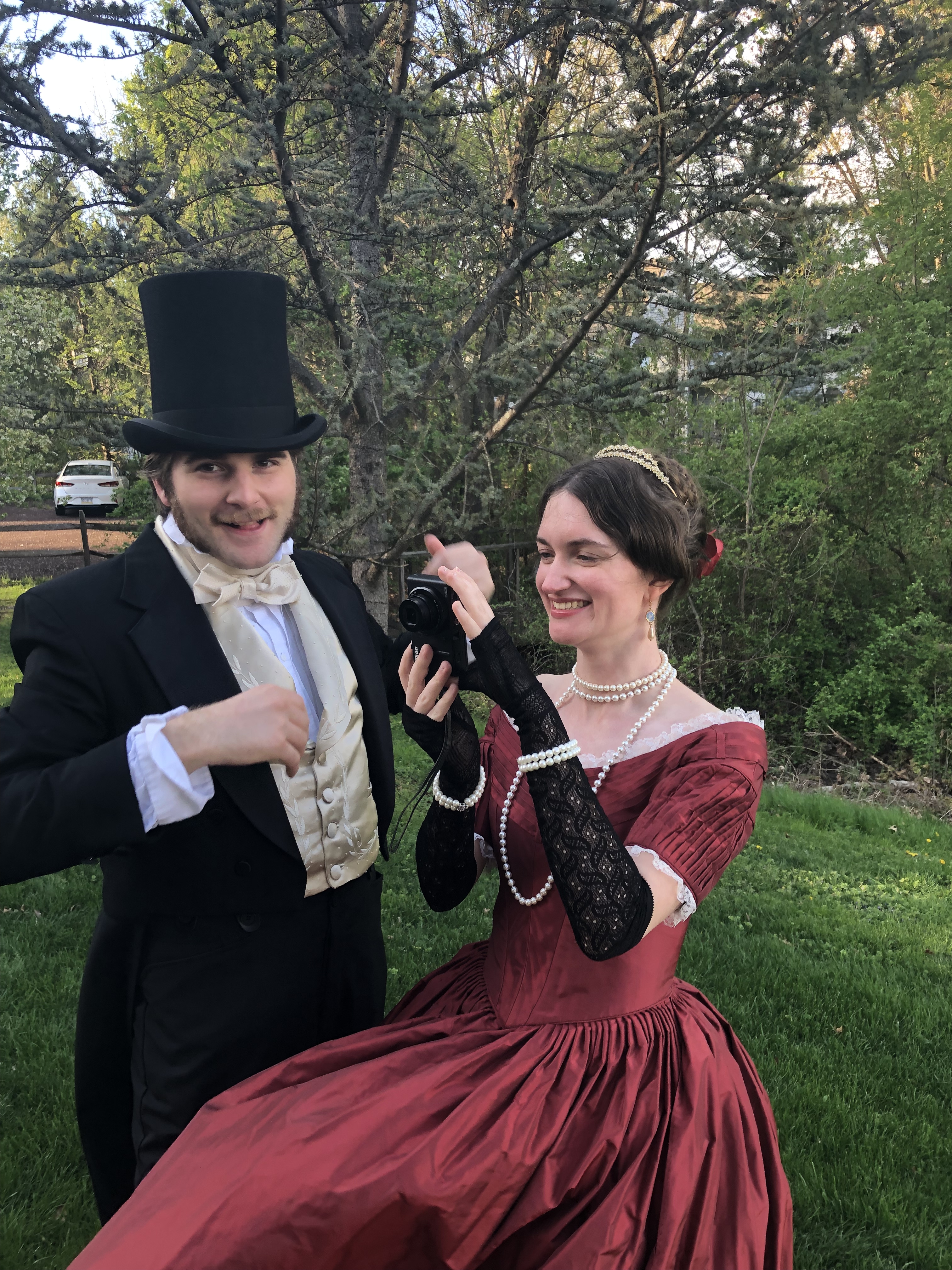 I do love this dress! It's one of my favorite colors, and the style is very much to my taste. Quite happy to have re-worn it! 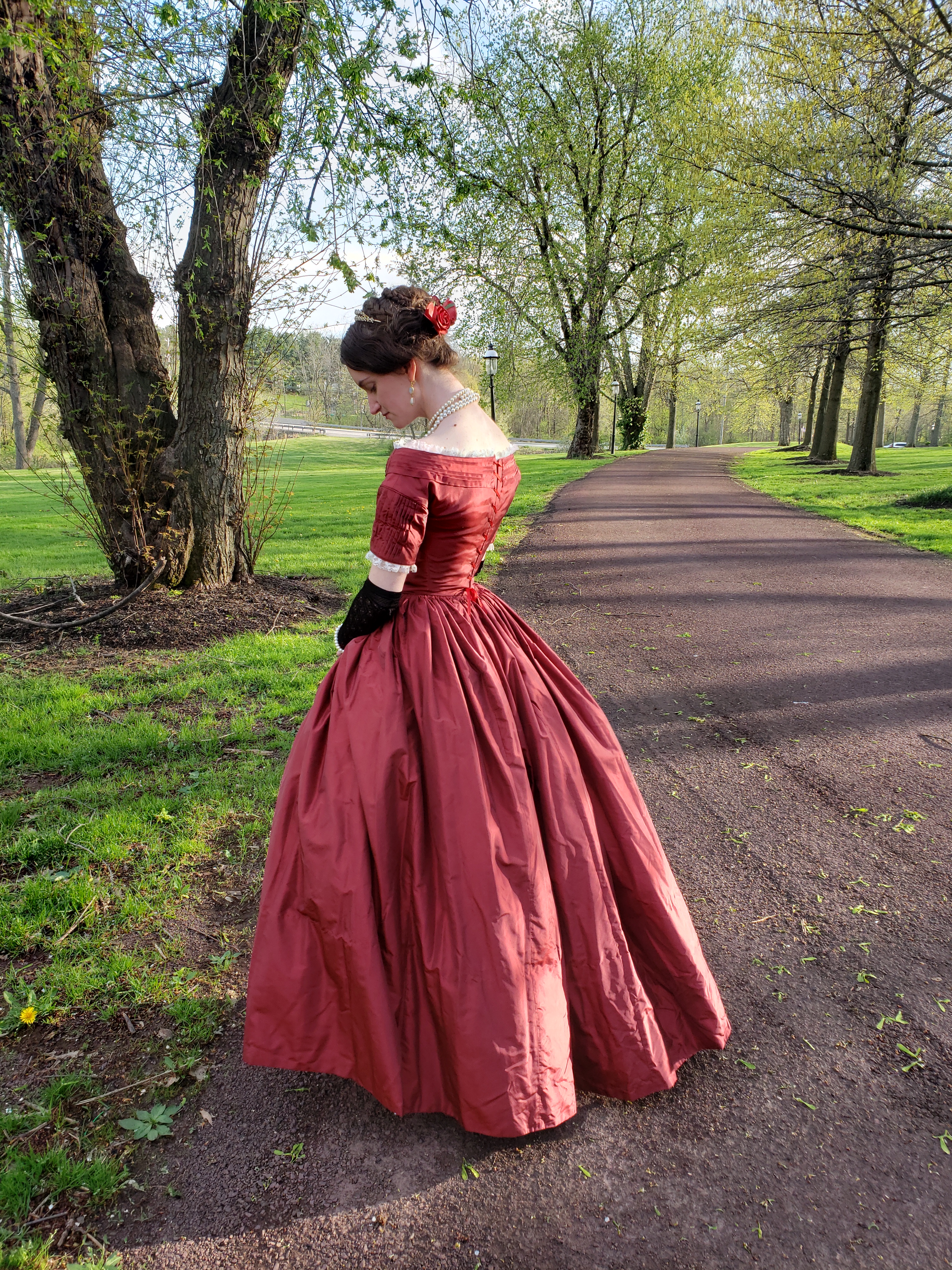 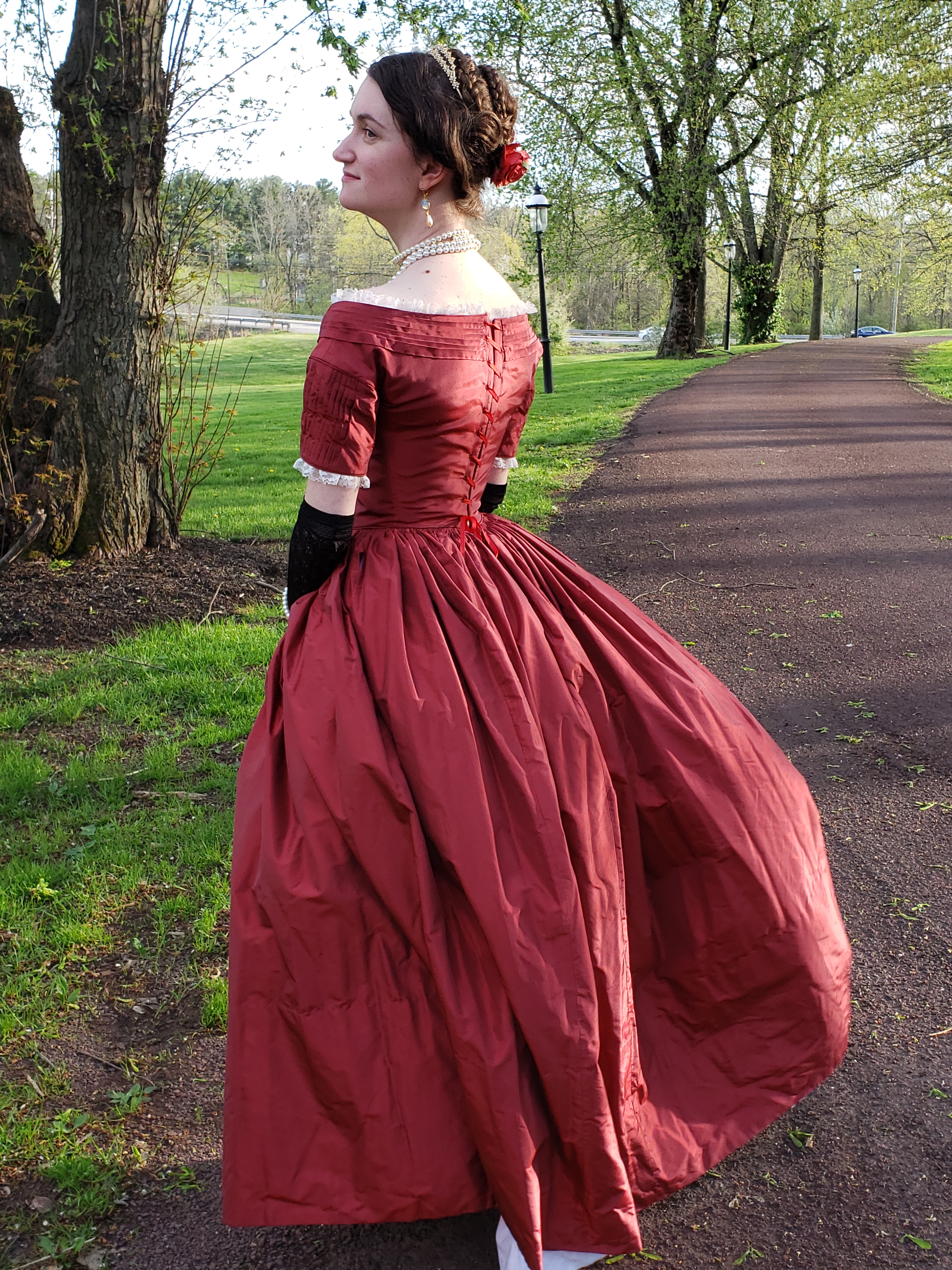 Everyone looked phenomenal, and I was thrilled to bits to be a part of it! Our hostess worked her magic on the dining room (it's in an early 19thc farmhouse, it just needed a wee bit of help!), and it went from this... 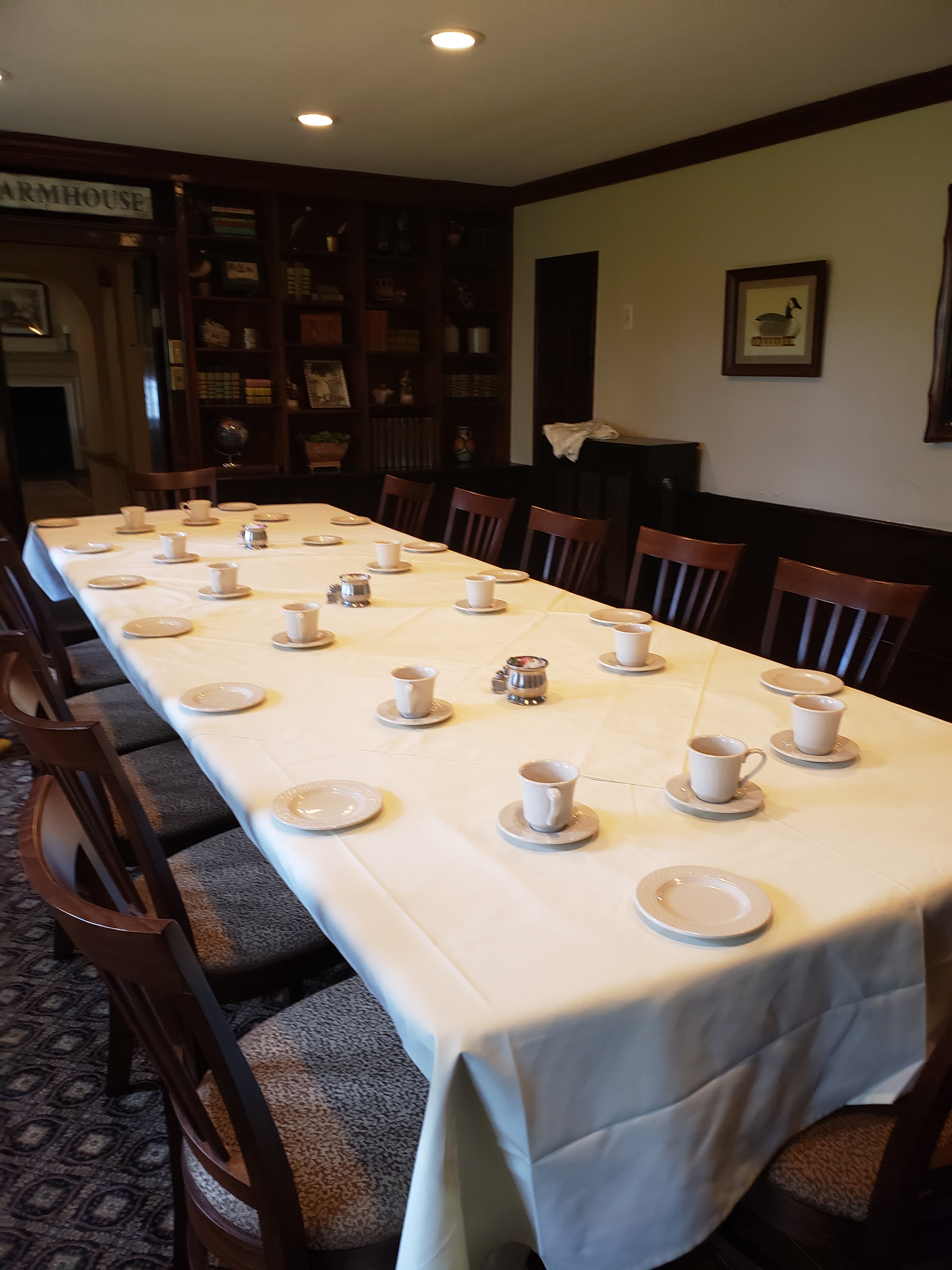 I think we're a rather good-looking company, wouldn't you say?

In addition to the dining room, we also had access to a couple of sitting rooms on the ground floor, where we had our appetizers and socialized before dinner proper. 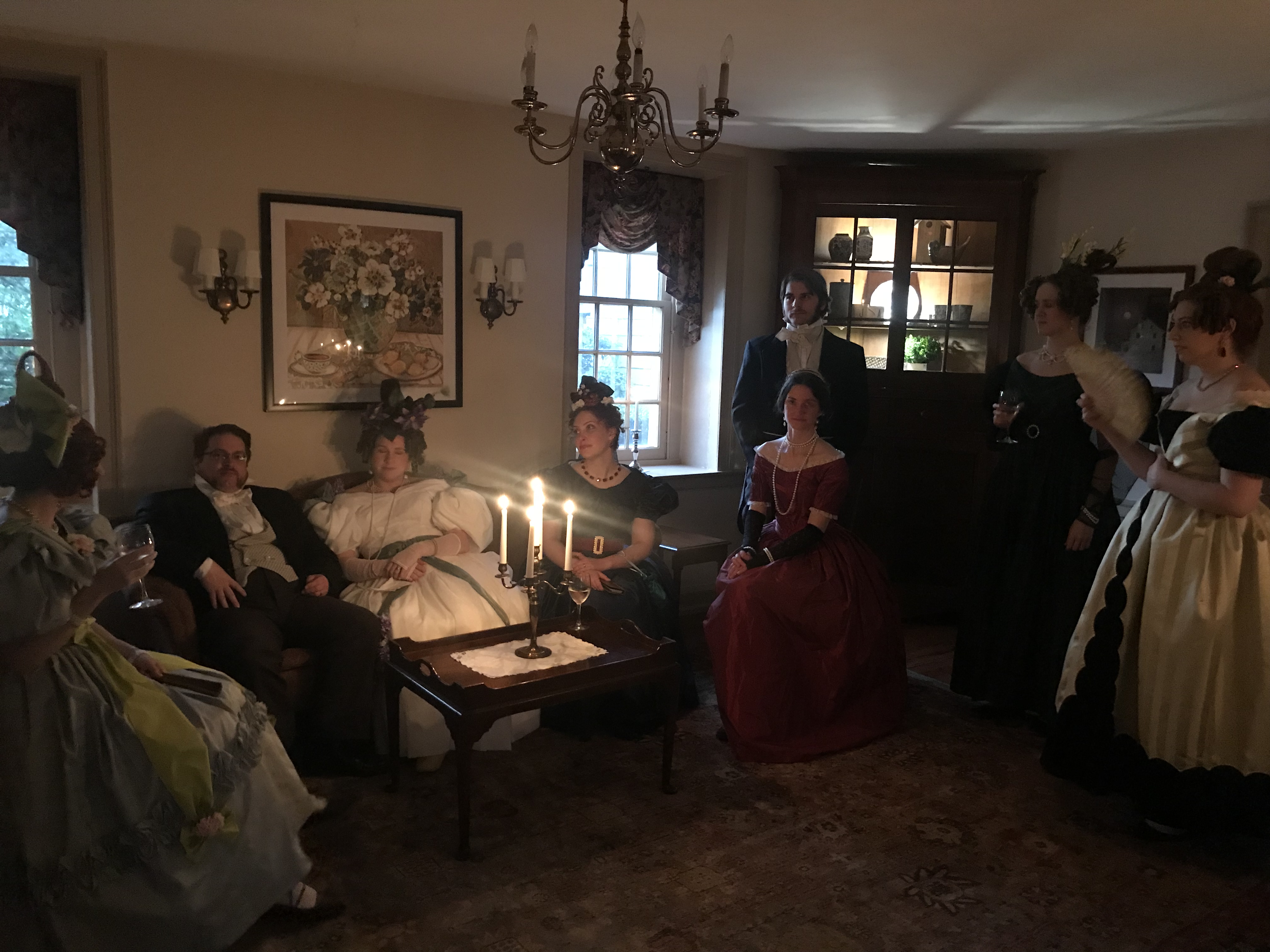 The food was delicious (I couldn't finish my dinner, which was very sad. But there's just less room in a corset!) and the atmosphere was perfect.
And it was a beautiful night for a midnight stroll!

Well...midnight is a decided exaggeration; I didn't make it anywhere near midnight! Many of the ladies stayed up playing cards, but I wasn't one of them. A good dinner and a day in costume puts me to sleep pretty quickly.

But it was a wonderful event, which we hope to repeat in some form next year. The Inn was very welcoming to us, and they make it very easy to have an event there. So I think we will!