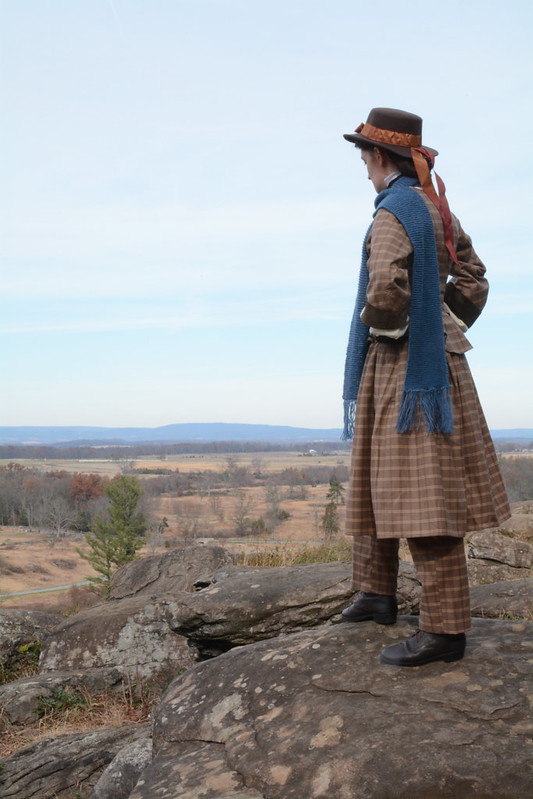 The short version is that most of The Usual Suspects agreed to wear trousers with me this year at Gettysburg as one of our day outfits, on the day we explored the park a bit. (A bit. There's a lot of park.) And it we had a great good time! 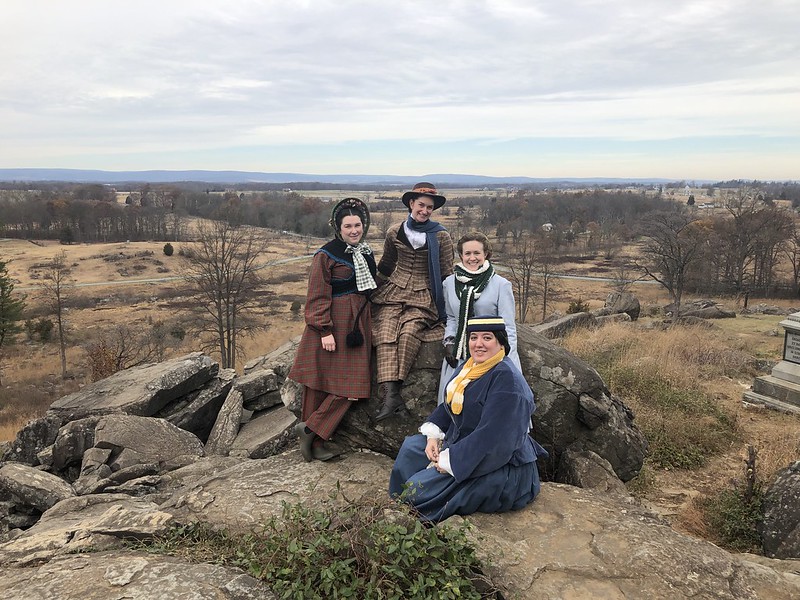 The long version is, well, long! I've actually been planning a rational dress outfit since 2015. Which, for us, is now three Gettysburgs ago. In 2015 I didn't get much past the planning phase, in 2017 I got it all about half done, and in 2019 I finally finished it all.
My original plan was to make a Rational Dress so we could take a horseback tour of the battlefield in costume. That didn't ever work out; this year when we finally all had our outfits made, one company didn't get back to us at all, one company was wishy-washy until the week-of when we got a negative, and one was a flat-out nope, despite our pleas of BUT I WANT TO GIVE YOU MY MONEYS. We're thinking we might take our show on the road to a local stable and just go out for a trail ride sometime in the spring.
Regardless of stables that didn't want our money, I was determined to at least go out and explore the battlefield a bit, even if it was unguided (it was. None of us are Military History People so all we can tell you about Gettysburg is the stuff that the signs in the park told us). After all, twowsers are so very nice for exploring!
And now, we interrupt this blog post to bring you some "Actual Research"...

There is in fact not a lot of research out there on rational dress, at least that's readily accessible online. Even my referring to what I made as "rational dress" is probably debatable: you also see references to "reform dress" and of course "Bloomer costume." I saw enough consistency to feel comfortable making the distinction between slimmer-cut trousers that look like men's, that you tend to see more during the 1860s, and the voluminous, gathered trousers of the 1850s - the latter was definitely referred to as "Bloomer" costume, but I'm just calling the later slimmer trousers "rational dress" for convenience. That's my modern shorthand, and I can't say with any certainty if that's accurate to the mid-19thc, or whether those outfits were so uncommon in most areas that there wouldn't have been consistency in what they were called.


I'm not going to do a full writeup here of everything I was able to find on rational dress; I'm going to lean on Robin of SewLoud for that (she hasn't done her rational dress post yet but I will link it when she does). I will direct readers to this (rather old) website, if they want to do some basic reading on the dress reform movement. I will also say that, since it was such a niche costume, there is an enormous amount of variation in photos, and that if you're making it purely for fun, just about anything goes. As an interpreter, you would want to pay much more attention to your persona's location/background/reason for wearing reform dress/etc. (The Oneida community is fascinating, imo. Your silverware was made by free love! Well...sort of.)


But you really do get outfits that run the gamut in photographs, from fairly shapeless but practical looking tunic and trousers, to bodice that wouldn't look out of place with a fashionable outfit, except that it's paired with a short skirt and trousers. And then illustrations and caricatures are a whole 'nother animal!


I will say that, from our collection of Pinterest images, a solid majority if certainly not all do still seem to be wearing corsets. Modern persons who still equate corsets with Oppressed Women might think that women who ditched the long skirts would also throw off their corsets...not necessarily! (They're really not oppressive. I promise.) The four of us that did rational dress this year all chose to fit our rational dress over corsets.


And now, back to your regular programming.
Since it was so long in the making, the exact design of this outfit has gone through a bit of evolution. Originally I wanted to get some hunter green wool and make a much more "riding habit inspired" look, but eventually decided to use some checked wool suiting that I had in the stash. 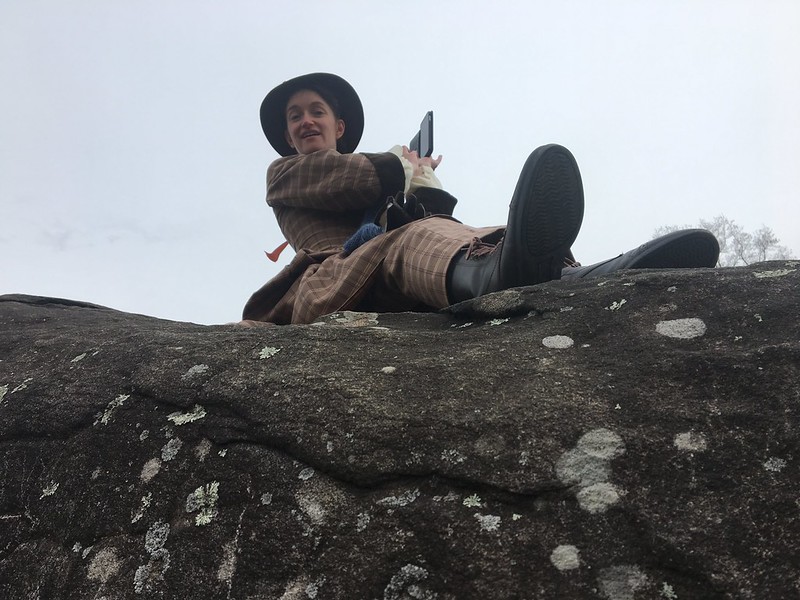 Funny story with the fabric: I originally bought 4.75 yards of it from Joann's, and then later found the exact same fabric on Fashion Fabrics Club, and bought 2 more yards of it so I could make both the rational dress version with trousers, and long skirt to go over a hoop. And...yes, I should probably have bought one more yard! But I did manage to make trousers, short skirt, long skirt, and bodice out of 6.75 yards, with some piecing in the sleeves.
I didn't base my outfit on any one particular image (although the photos of Dr Mary Edwards Walker were highly inspirational, just by virtue of her awesomeness), but I was and still am amused by how incredibly well-dressed the manly ladies of caricatures tended to be. Are they supposed to be a deterrent? I think they're fabulous! I especially liked the lady at the center of this picture, dressed in the windowpane plaid. The photos of women in rational dress tend to be more in solid-colored outfits, so I happily took Ms Smoking In Windowpane With A Doggo as my primary inspiration. She's about 10 years off my outfit, but let's not pick nits, shall we?
For the trousers, I used McCall's 4745 - "Civil War Coat and Trousers" pattern. I'm sure there are more historically accurate patterns, but it does what it says on the label! I cut the smallest size, for the hip, and then tapered the waist in, and they actually fit pretty well. Considering they're man-pants. 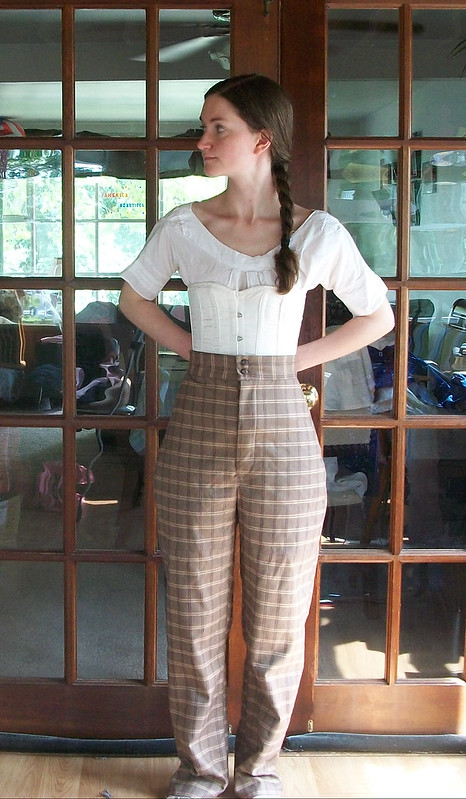 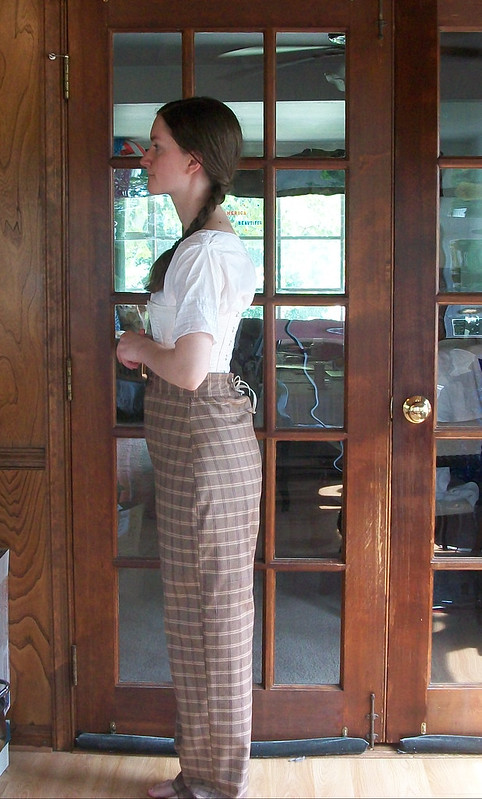 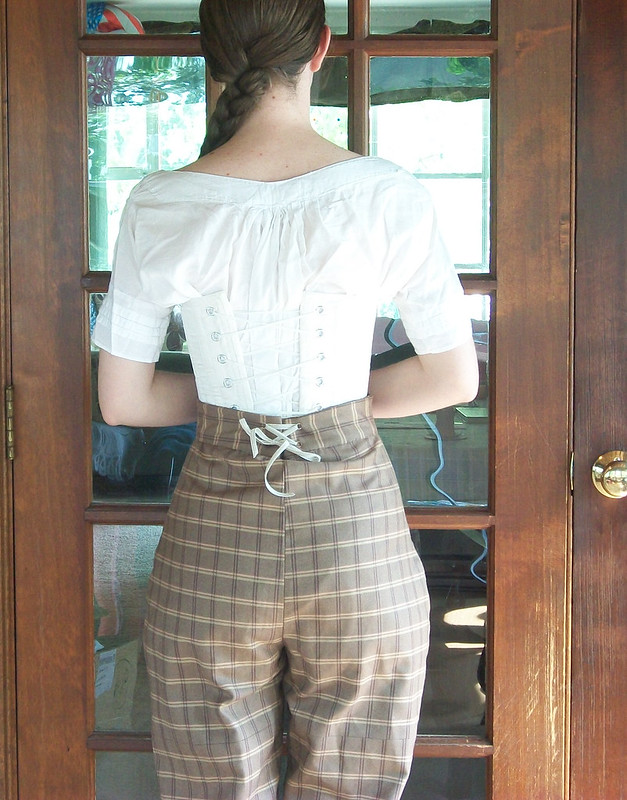 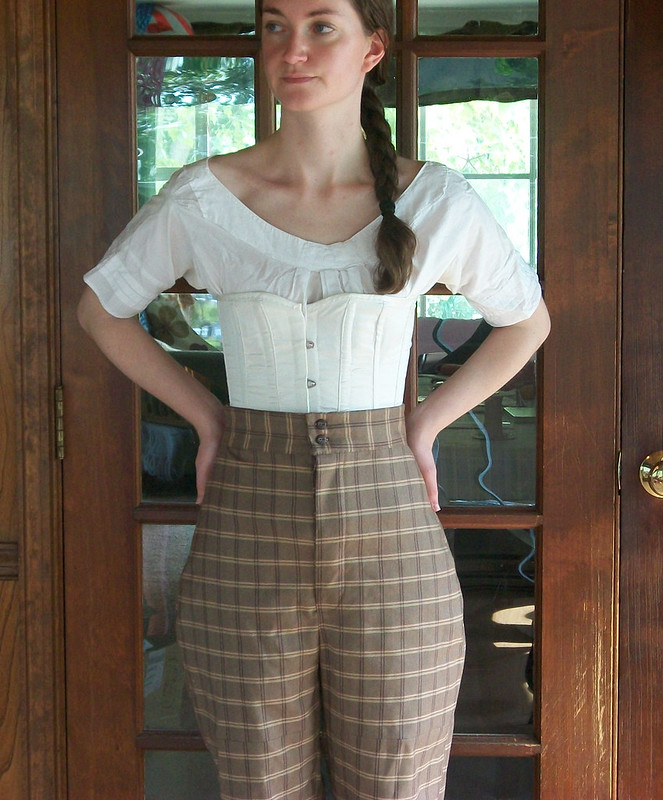 A side note: I also chose to wear my rational dress over all of my usual mid-19thc undergarments; that is, chemise, drawers, and corset, and made sure to fit the trousers over all that! Since we haven't come across any specific account of "And today I decided to get dressed in my trousers, over this precise underwear" (shockingly, right?), that's entirely conjecture on my part, but it worked just fine. I ended up with a slightly stuffed bum, but once the drawer legs worked themselves down into the trousers it wasn't uncomfortable. Of course we can't know how women chose to deal with the underwear question when dealing with trousers, but I'd venture an educated guess that at least some of them might have just continued wearing what they were used to, and just adding the trousers on top of that. Again, rational dress was a bit of a free-for-all; do what you want!

Both of the skirts are very simple, just rectangular panels pleated up to a waistband; it's just that one is considerably shorter and less full than the other! I haven't yet had a chance to wear the "normal" skirt yet, but I'll post it when I do.
The bodice had a bit of a saga. I cut a mockup back in 2017, didn't like it, and bought an Ageless Patterns bodice and jacket combo, mocked up the vest all nice and proper, that I think would have come out really nicely if I hadn't somehow managed to make the vest 2" too small all around, with two weeks to go til Gettysburg. I discovered this when it was almost done, of course. I could probably have taken it almost completely apart and fixed it, but since it was lacking in vertical as well as horizontal, I took it as a loss and went back to the drawing board. Literally! All the way back to my 2011 first 1860s basque bodice pattern, rather than fussing with the AP one, which was further off from my measurements. It left a lot to be desired, but I fixed it up and refitted it pretty decently. 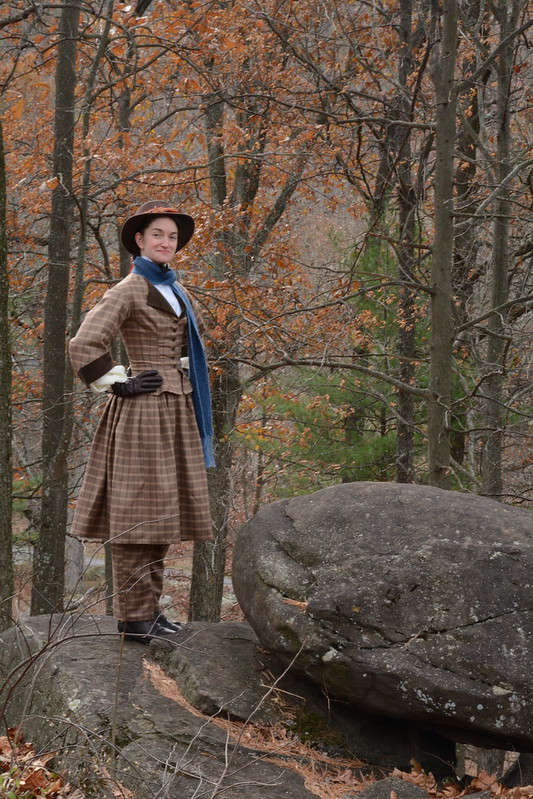 It did end up a titch on the small side (see: all those horizontal bodice wrinkles in the front!), but, oh well. I should have done more fine-tuning in the fit of the side-seam in the mockup rather than just yoinking in the darts (which is what I did), but see aforementioned two weeks to Gettysburg, and I wanted this done.
The whole thing is made in the usual manner for my mid-19thc costume: machine sewn main seams, with hand finishings. I made the facings out of pink silk rather than the self-fabric that I normally would use, as I was running so short on fabric! 3/4 of the sleeve pieces are pieced together, as are the side-back bodice pieces - if you look very closely you can see which ones I did a better job of matching than some others...
The chemisette (linen-cotton blend) is made like a little man's shirt-front, with tucks and buttons, but it's shaped like a normal chemisette, rather than being shirt and sleeves, so I can switch out the undersleeves if I so desire. For Gettysburg I whipped up a pair of wool flannel undersleeves, but I can easily switch those out for my regular linen sleeves. Very basic, just tubes gathered to cuffs and basted in! 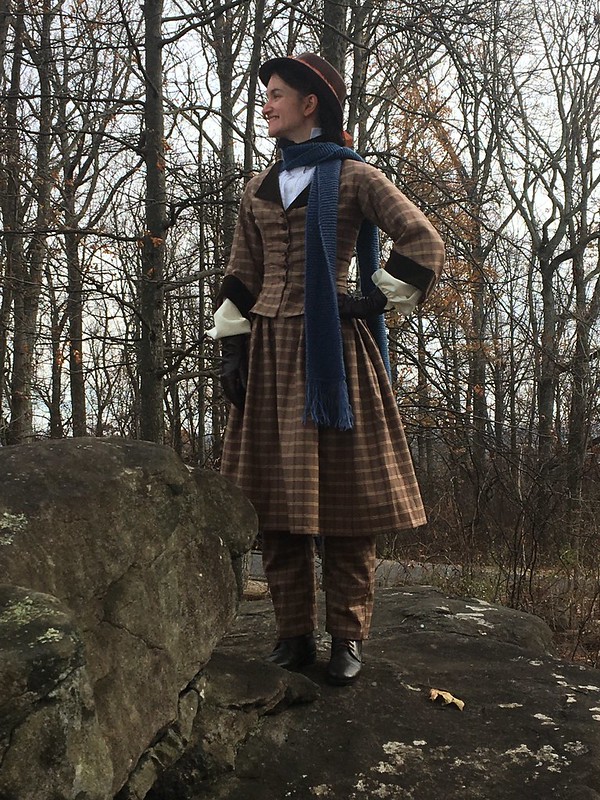 The tie is just a long strip of fabric with shaped ends - and it is super incredibly fussy to make a nice bow, wow! I may consider a stock collar for the next wearing, sheesh. Manly Neckwear does enforce good posture, though...I can tell you that much! Slouch and you get choked.

The hat's just a cheapie Amazon wool felt hat that I slightly reshaped, pulled out the weird crappy kinky wire from the brim and replaced it with millinery wire, and added some ribbon. And left an iron-shaped steam mark on the underside of the brim, ahem. It's kept on by an elastic that goes under the hairnet round the back of the head and a pin stuck through the front. I promise it does not just perch there nicely with magic!
Other things: the temperature that morning hovered around the mid-30s to about 40 (F), and I was entirely comfortable in my outfit and a wool muffler. The flannel undersleeves, silk undershirt worn underneath my chemise (knit undershirts for warmth are period!), rabbit-fur-lined gloves, wool stockings, and exercise (!!) did help! Layers! Natural fibers! Modern or historical, they are your friends. It was a great outfit for being outdoors in mildly chilly weather. Below freezing and I'd probably have wanted a coat of some kind, but wool really is a lovely fiber! Highly recommend. 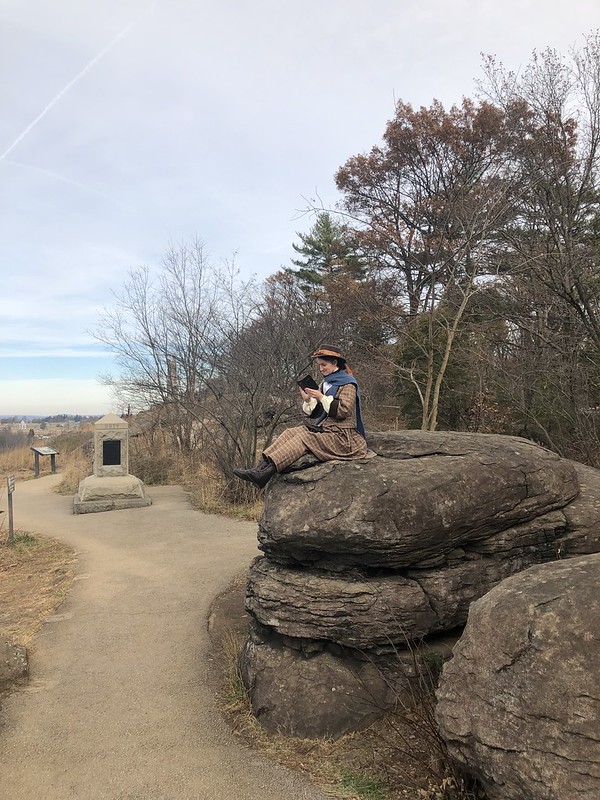 Footwear: Ebay. I tend to have great good luck on ebay in my size for reasonably period-adjacent-footwear, and these were another score. They're not perfect of course, but they're comfortable and supportive (they're actually paddock boots), with a low heel and unobtrusive toe, durable leather, and good for tromping!
After dinner, we popped by the Victorian Photography Studio to get a couple of tintypes taken; Robin got a group one, and I got one of me and her (that I still haven't scanned yet, because oops).
Silly faces...who, us??
Does give a few shots without outerwear on though!
And now, an overabundance of pictures, because honestly I'm tickled with how jaunty and adventurous we all look!