I promise to do a slightly thorough post about all the research I didn't do on this outfit once it's actually finished; as it is, this is a soft opening, if you will! A friend pitched an SCA event to the Usual Suspects a couple of weeks ago, and, while the vast majority of my costume interest for the last decade has been 1760 and later...this event was in a local park, and free! So hey, why not? I have actually always wanted to make a Flemish workingwoman's dress circa 1550-80s, way back in the mists of 2005 when I started costuming because I was in my high school's madrigal choir and lived on the Elizabethan Costuming Page! I never actually got around to making it before I developed more interest in other eras, and found local friends who were also interested in other eras...but it was always on my "someday, when I have a reason" list. Well, here's a reason! 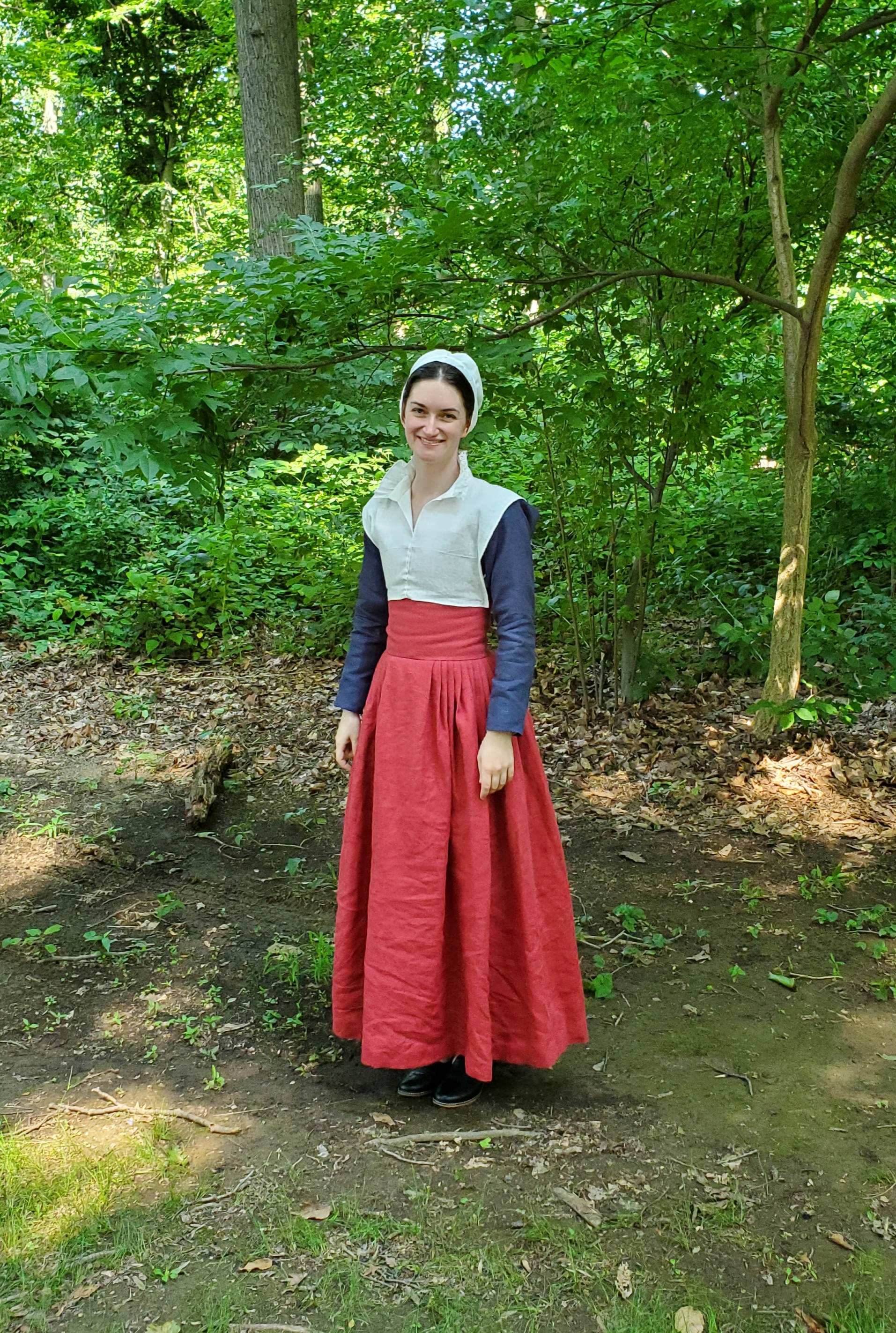 Now, I was very much aware that I probably wouldn't have time before the SCA event to complete the entire outfit (and I was right). But since it would be nice to have something in the closet to pull out for a Ren Faire visit or something, I decided to go for it anyway, and finish whatever wasn't completed later.

For those of you who didn't have a "16thc phase" in your costuming, this is an example of a Flemish workingwoman's dress:
There are many small variations, but the broad look is pretty consistent: it's the laced gown that gives this type of outfit its distinctive look. Of course, the gown is what I decided to make last and thus ran out of time for! But the way I decided to make my layers, the gown on top was the least necessary for having an actually wearable outfit, so I was fine with that at the outset.
I chose to make a kirtle to go underneath the laced gown, along with the white partlet and pin-on sleeves for its first wearing. (I already had the square-neck, long sleeve linen smock from my Tudor outfit, happily.) I also chose to make it all out of linen, partly because this outfit will 9 times out of 10 be worn in muggy Philadelphia summer weather, but more because while wool would be more correct, and I actually have nothing against wearing lightweight wool in the summer (yes, really! tropical weight wool is lovely), finding wool in the weight, color, and price point I wanted was impossible! So, linen it was. Midweight for the kirtle and gown, and lightweight for the gown lining and separate sleeves. Kirtle bodice is interlined in cotton duck, and lined with scrap-bin linen; skirt is not lined.
Construction-wise, I did as much machine sewing as I could while still following my personal preference of "no machine sewing visible on the outside". I wanted to make a kirtle without boning and see what kind of support I could get - apart from the boning next to the eyelets, the bodice is only pad-stitched to the interlining, both to help it hold its shape and to keep the linen from creeping! I ended up constructing it a bit like 18thc stays - I constructed the bodice and put the eyelets in, and then stitched the lining in over that. It gave a little bit of wiggle room in terms of fit.
Although not quite as much as I needed! I made the bodice of the kirtle probably 3/4" longer than it really needed to be, but shortening it would have meant cutting off the eyelets, which would have been...hard. And I'm long-waisted anyway, so it's really not so long that it's unwearable. A few wrinkles would go away if I shortened it...but like I said, too much work. When I make the gown that goes over top I'll make sure to trim off a bit from the pattern...
The bodice is also just a touch too big - it really needs about a half inch taken out of either CF or CB, but, again, as that doesn't make it unwearable and fixing that would be more work that the problem merits...it's staying like this. I actually had even more gaposis at the neckline before I took a big ugly tuck at the inside corner of the shoulder strap. That didn't entirely fix it, but made it slightly more manageable. Plus I never actually plan on wearing it without the partlet over top, so it's not a big deal.
White partlet is very simple, just a rectangle with a split front and a neck circle cut out, with a rectangular collar and straight strip of linen gathered up for a ruff. I made the mockup too short in the front, so I lengthened it in the linen and now it's a bit too long! I just want it maybe half an inch shorter. That's what a first wearing is for, right? 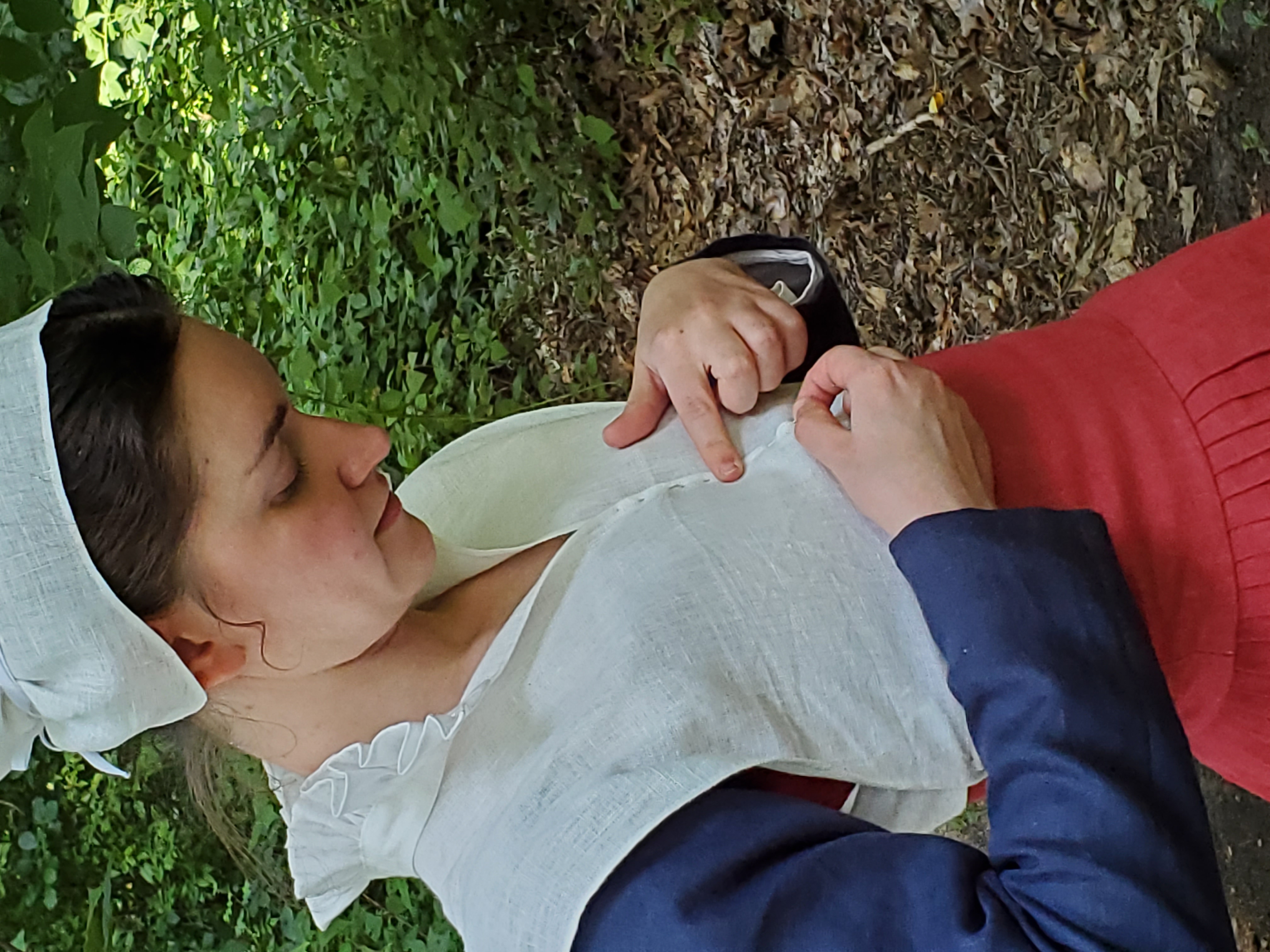 It just pins shut in the front and pins under the arms - which, yes, I can do myself. That was another reason I wanted the partlet to be on the longer side - too hard to pin ends that juuuust reach under your arm! 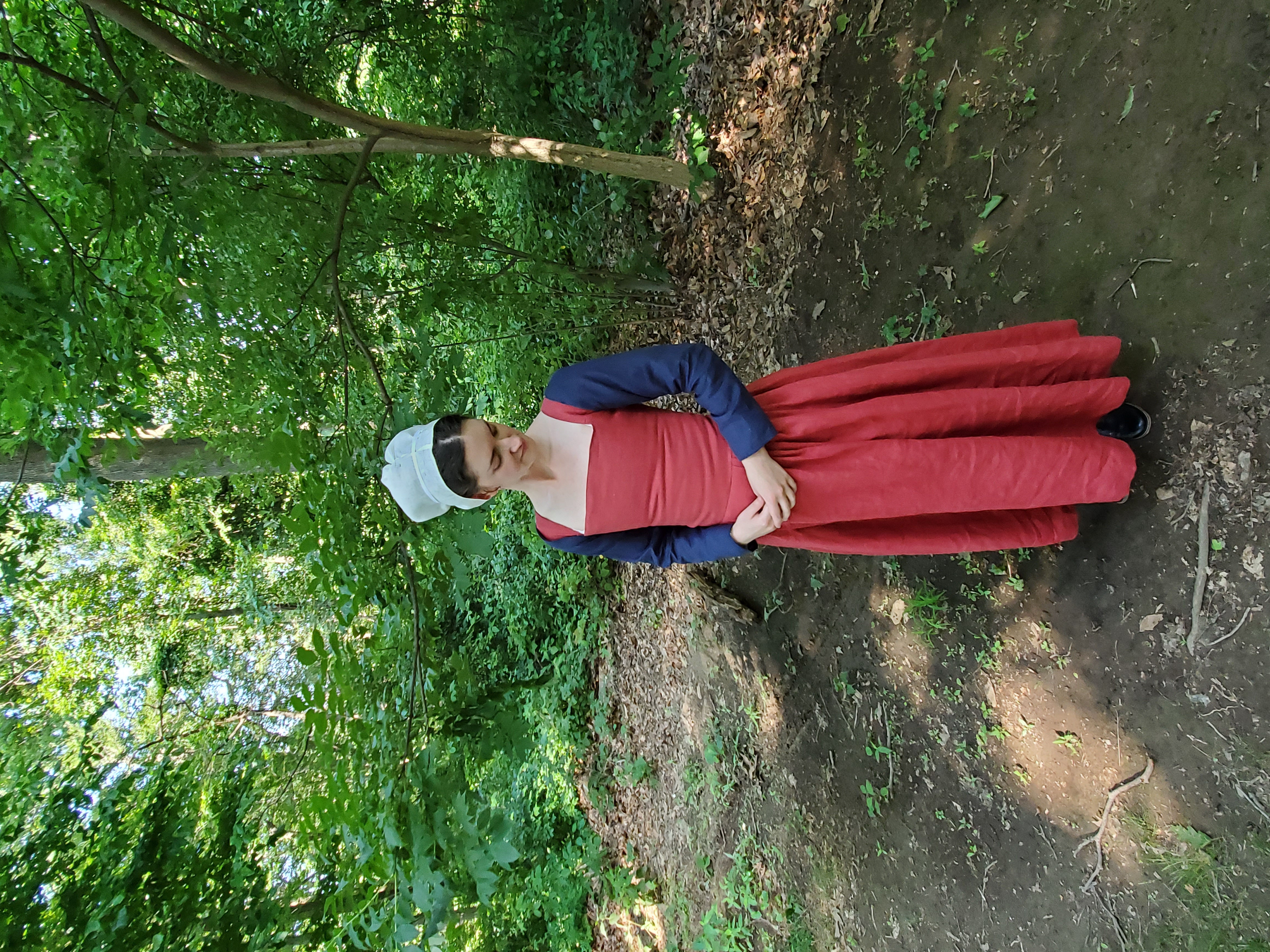 And headwear? I made both a veil and coif, but decided to just wear the coif for the day. It's a simple one-piece coif, made of linen, what more can I say? I didn't practice arranging the veil and the coif before day-of, and it turns out that, while starched linen will happily hold its shape in that C-curve that many of the veils/hoods of the time show, I made my veil a little too wide to stay in place nicely and frame the face. Every way I pinned it looked dorky. Another thing to work on for next time!
Adrienne, the aforementioned SCA friend, offered to make me one of those ear-wire thingies (yes, I know it's actually an oorijzer), which she gave to me at the event. I decided not to seriously fuss with it at the event, partially because of the aforementioned slightly too-wide veil, partly because I'd have had to take my coif off and rearrange my hair to put the ear-iron on properly, and partly because I need a real mirror to mess with all this, not just my little compact that I brought to make sure I didn't have streaks of sunscreen on my face! But it was very kind of her to give me, and I will probably make use of it next time.
Pin-on sleeves are lightweight linen, unlined. I could have taken them off if it'd gotten hotter, but we were fortunate to have low humidity and be in a wonderfully shady place, so I was totally fine with long sleeves. I didn't quite pin them on evenly plus they're a little bit larger than they need to be, so there's a little bit of extra sleeve head sticking out the back. Which looks silly, but, again...mostly covered up with regular wear!

And the nice thing about this outfit is that I can wear it in a pretty wide range of seasons - probably not dead of winter, but in the mid-Atlantic I'll be easily able to take it into late fall if need be, by adding a black wool partlet on top of the white, and switching out the unlined linen sleeves with lined wool ones. Not that I anticipate needing to...but I like having the options. 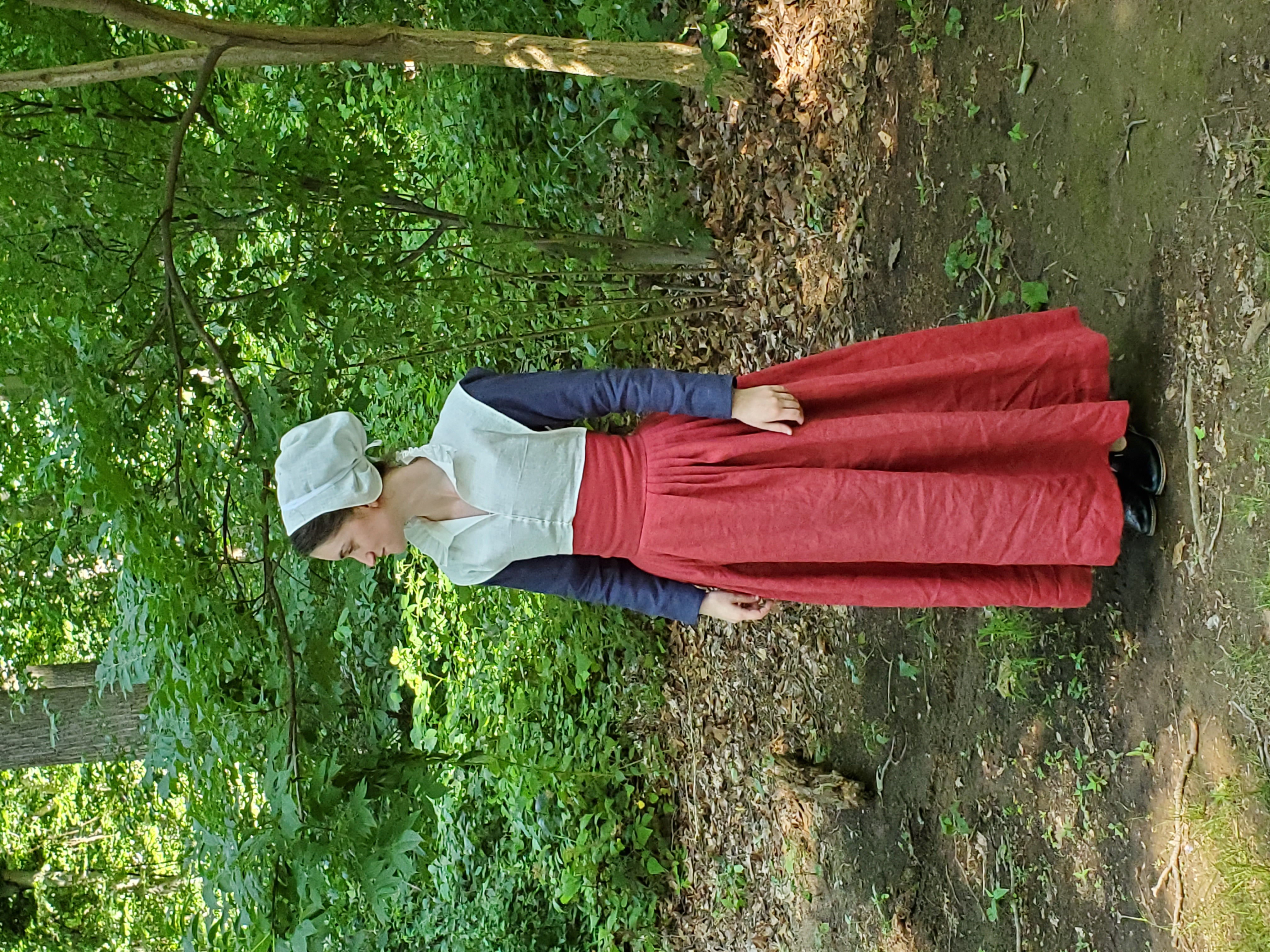 So, I sound rather nitpicky about this outfit, but I'm actually very pleased with it. It's comfy to wear, it breathes, it's versatile, and I can happily go tromping through the woods in it! (Hashtag not deterred by muddy paths.) My "nitpicks" are more to remind myself what I want to fix on it/add for its next wearing, since this was something of a dress rehearsal. Dress rehearsals are always good!
And after this: a rather dissimilar era! Foray into the turn of the century!
Posted by Amanda at 10:37 AM