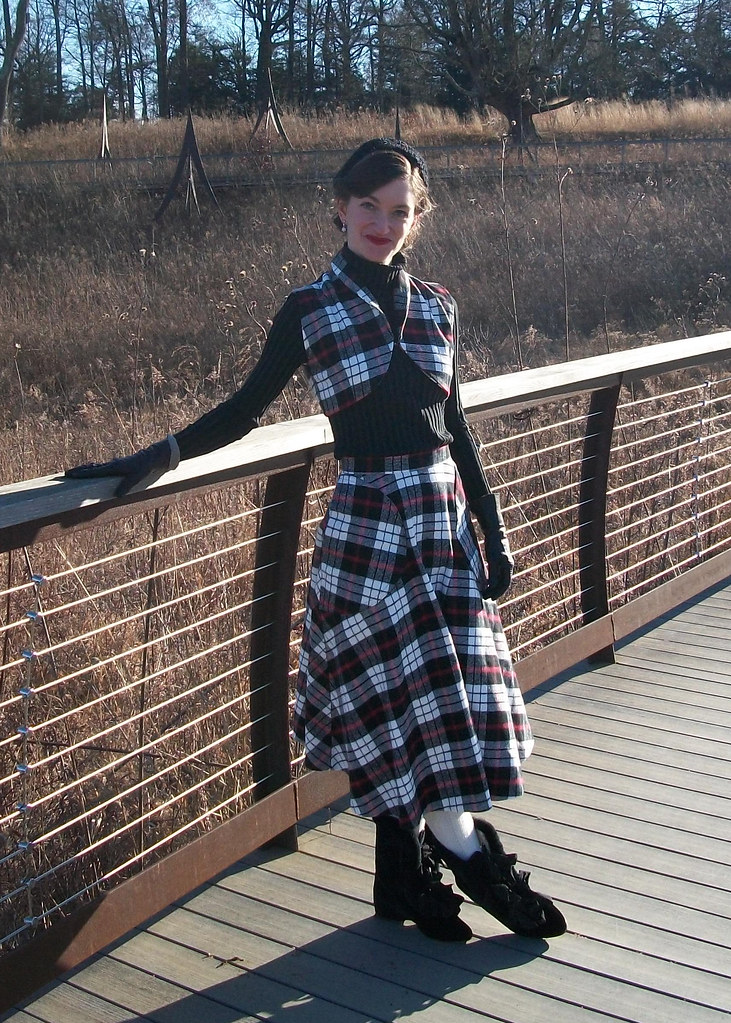 (No, this isn't the failed-tea dress; that is currently still in the naughty pile. This plaid was much better behaved!)


I've made the Simplicity 8250 skirt before, out of plain-weave navy blue wool blend, so I knew I liked it, and something easy that I knew I like was just what I needed for this project, after the other frustrating plaid dress. Plaid does like to throw you curve balls, though, and I found I couldn't quite match up some of the seams...because the fabric wasn't woven evenly. For instance, no matter how hard I tried, no matter how much I steamed and stretched the fabric, I could not manage to cut out the pocket pieces so the plaids matched exactly. 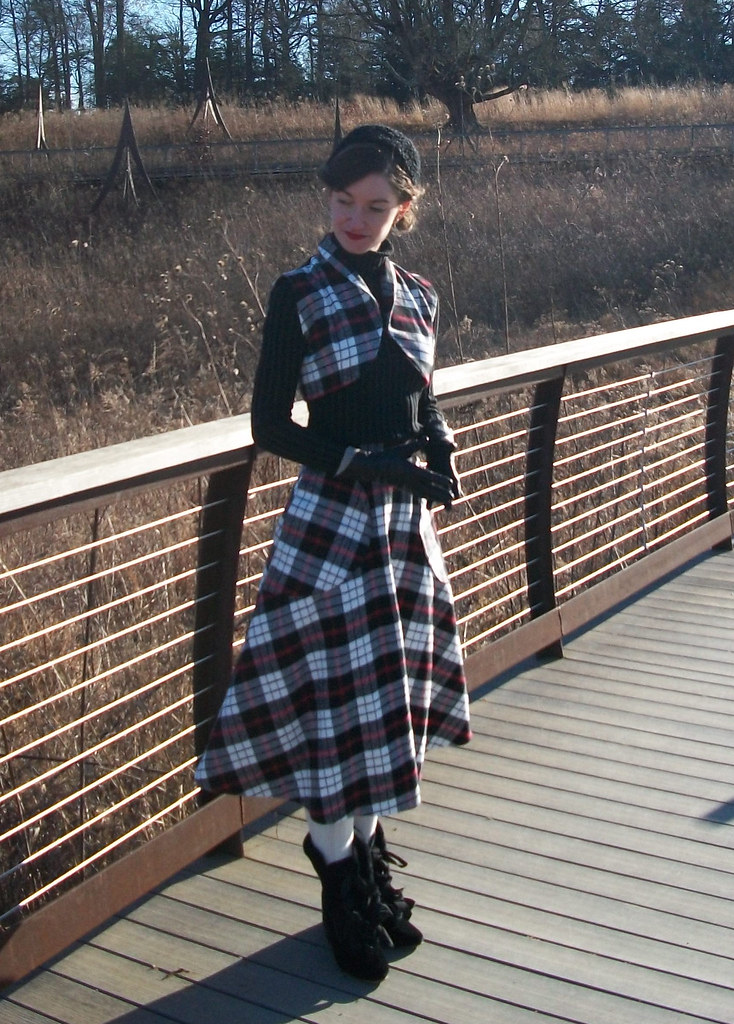 It's an apparel-weight cotton flannel that I bought very-on-sale from work the end of last season, and it's a good thing I only paid $3-something/yd for it! Good old Joann's. *shakes fist* Oy vey.

I was working with far less fabric than the pattern called for - my usual method is to pick out a piece of fabric from the stash and then see if the pattern will fit on it, not the other way round! Plus I was feeling very casual about plaid-matching for this project anyway, so I only matched plaids going one way, not both. I.e. the CF plaids line up horizontally but not vertically, and at the side seams, the horizontal red lines match up, but nothing else does. 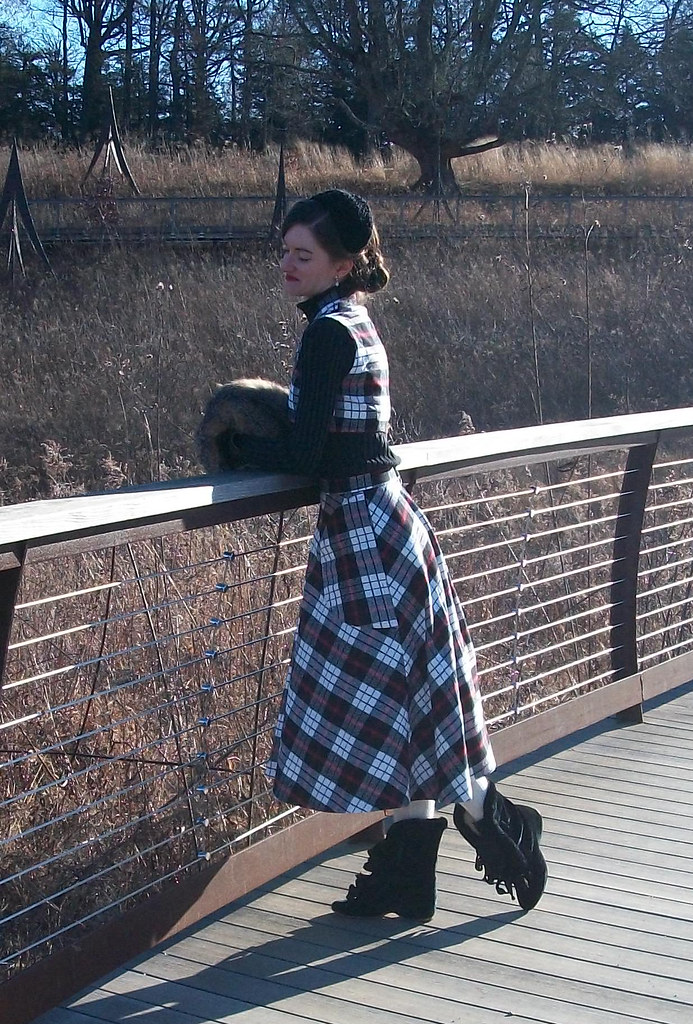 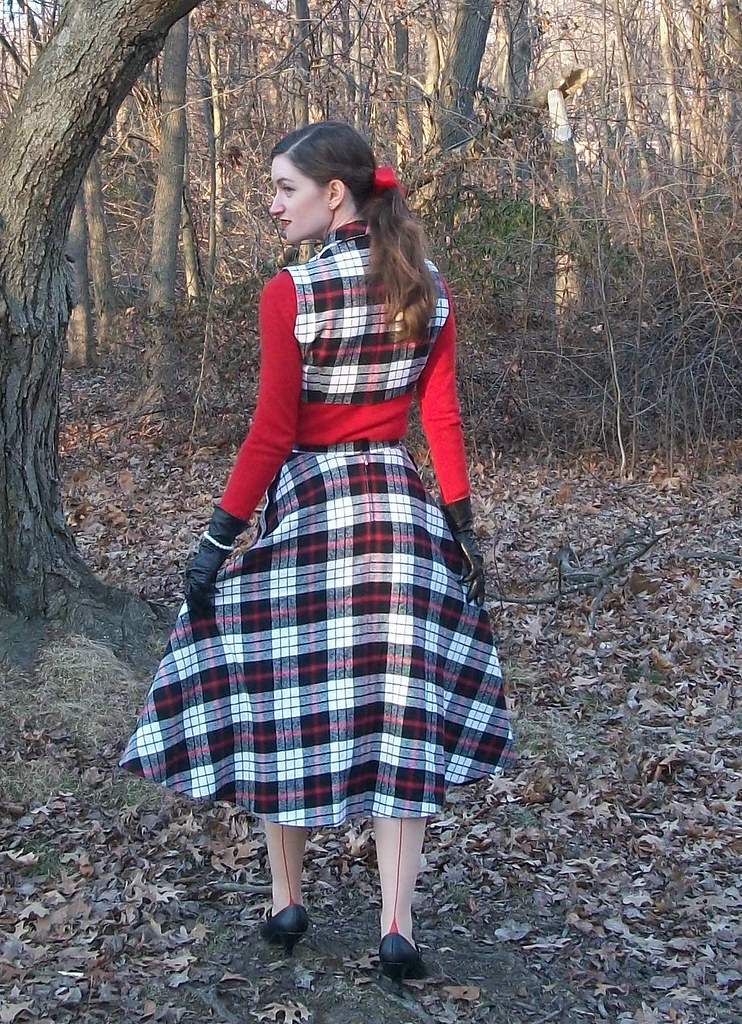 The bolero in the pattern, you may have noticed, has one thing my version does not. Namely, sleeves. After I'd cut out all the skirt pieces, I had a little bit of fabric left. Far too much to throw away, but really not enough to make anything else out of - pencil skirts are my go-to for remnants, but this wasn't even enough for that. Well...what if I took the sleeves off the bolero in the pattern? Yes, they're batwing-type sleeves, cut in one with the body of the bolero, but I can fudge that, right? 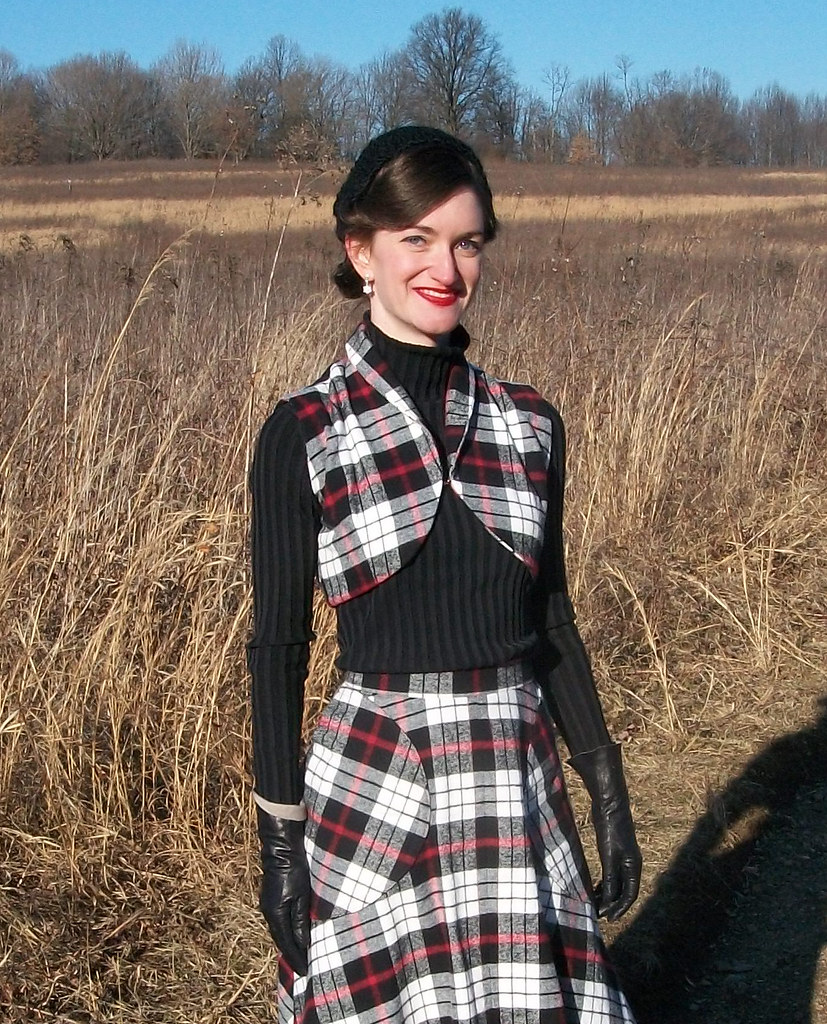 Mostly. The shoulders do wrinkle some at the front, which I could probably fix with some padding...but it's a one-layer cotton flannel bolero, I seriously doubt I'm that motivated. Astoundingly, I did manage to match the front and back plaids at the side seams. The facings, on the other hand, are all kinds of whacked-out, but they're facings, so who cares? (Minus the collar facings, which do in fact match, since it would be really obvious and terrible if they didn't.)
It's been a very cold week here in the Philly area, so this outfit's first wearing involved wool tights and American Duchess carriage boots! Much as I love those boots, I think this outfit looks smarter with coordinating shoes and seamed stockings...but as I was going to be outside all day, that didn't seem to be the practical option. 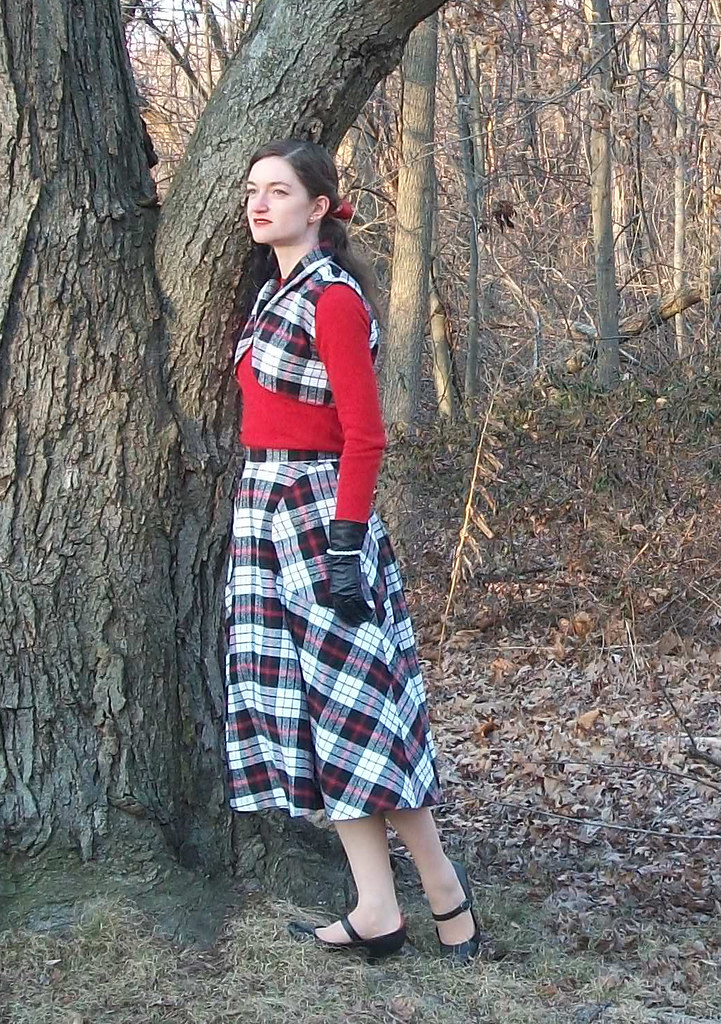 I wore it again today, to a much more indoors sort of day, so on its second wearing I deployed some red WKD red-seamed stockings, black heels, and a slightly fluffier petticoat. 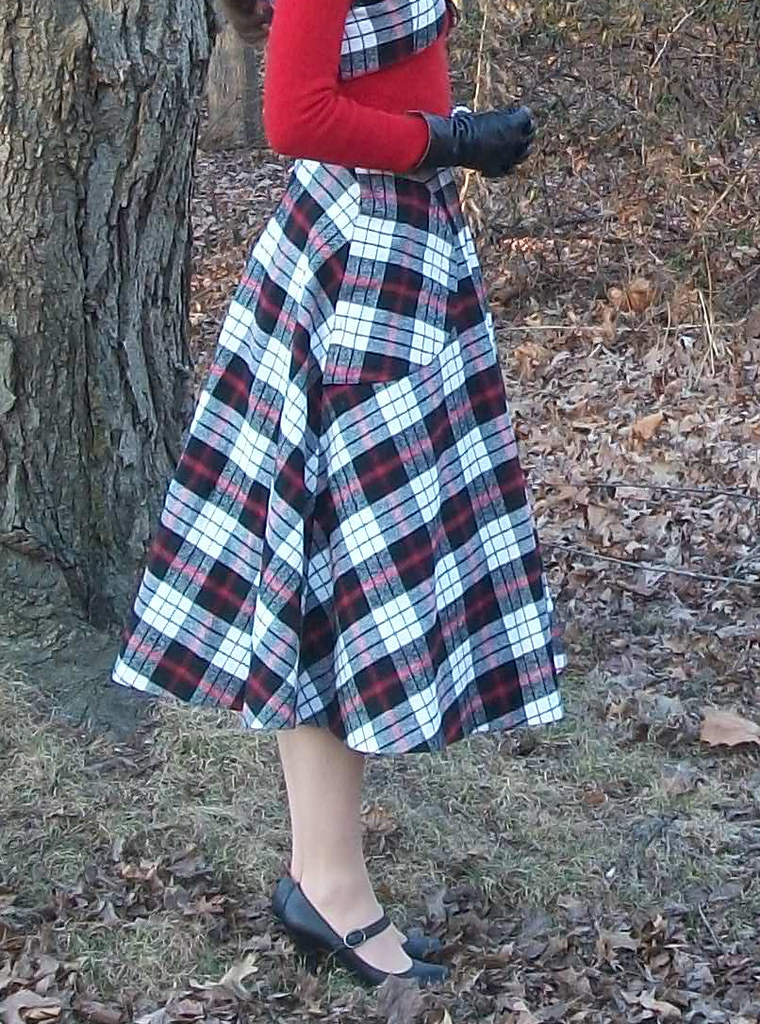 And next time I could switch up the shoes and stockings, and go with red shoes, black contrast stockings! I think I might like black and white and red things... 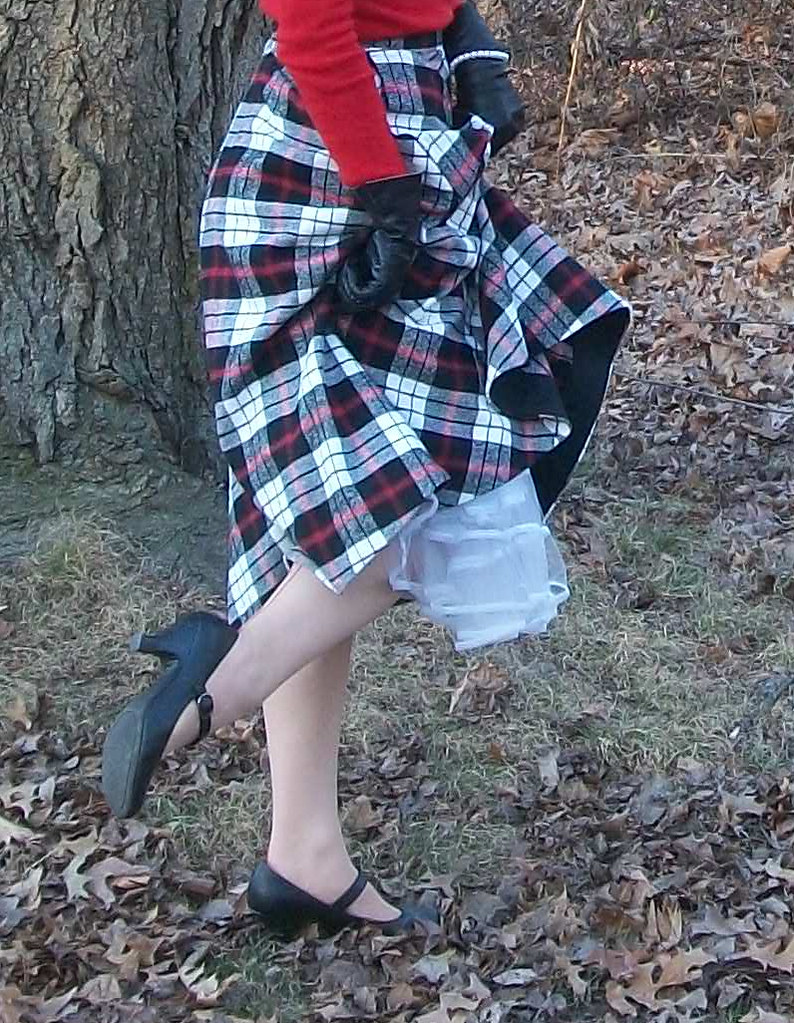 And you can see a bit of the hem facing there...usually I make my own or use a ribbon, but here used the Wright's premade stuff, as I was pressed for time, and it's a semi-circular skirt so straight-grain ribbon wouldn't work very well. Nasty stiff poly-cotton facing! Which works for a skirt like this, but keep that stiffness in mind if you want a softer drape on a skirt... 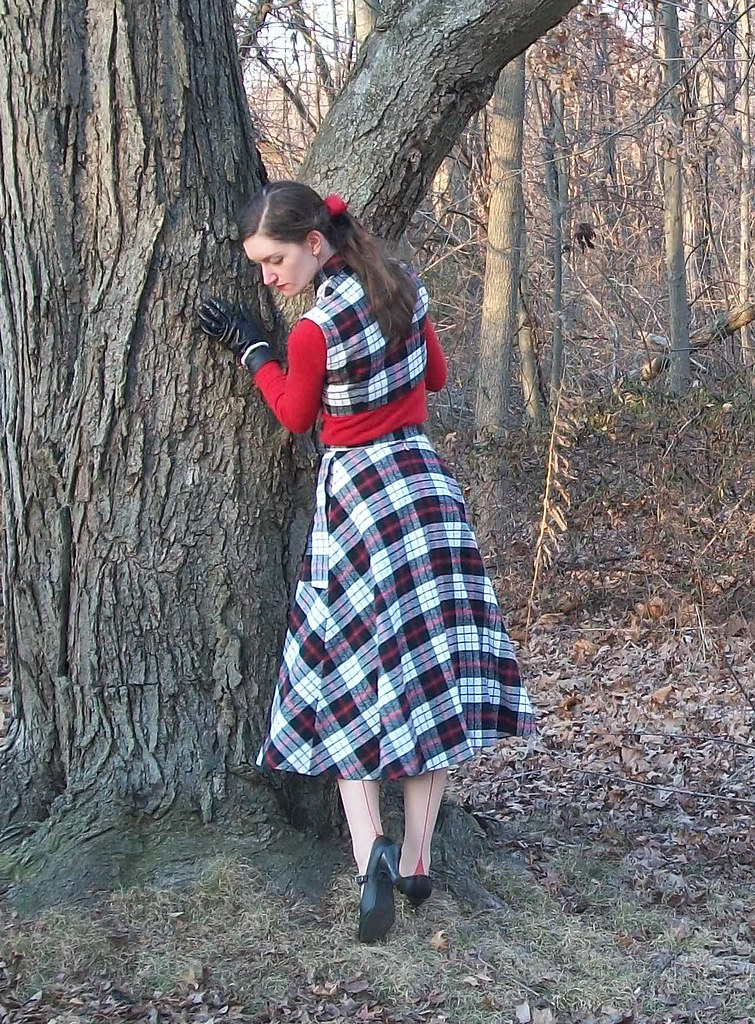 Other than that? The skirt is all nicely finished (seams not on the selvedge are hand-felled), and the bolero is not (at some point I'll go back and bind the seams, but I wanted to wear it more than I wanted to have the seams bound this week!).
vintage-style:1950s